Palermo is my second home. So I always had a kind of different point of view on the city. More like a local than like a tourist.

During my last stay though I tried my best to see the Sicilian capital through different eyes. I went to explore places that I hadn’t seen since I was a child. By that time why just went there – me and my family – to check that. Now, 20 years later, I took a look again at the beautiful historic places. I did some day trips as well. I will tell you about them in my next blog post. 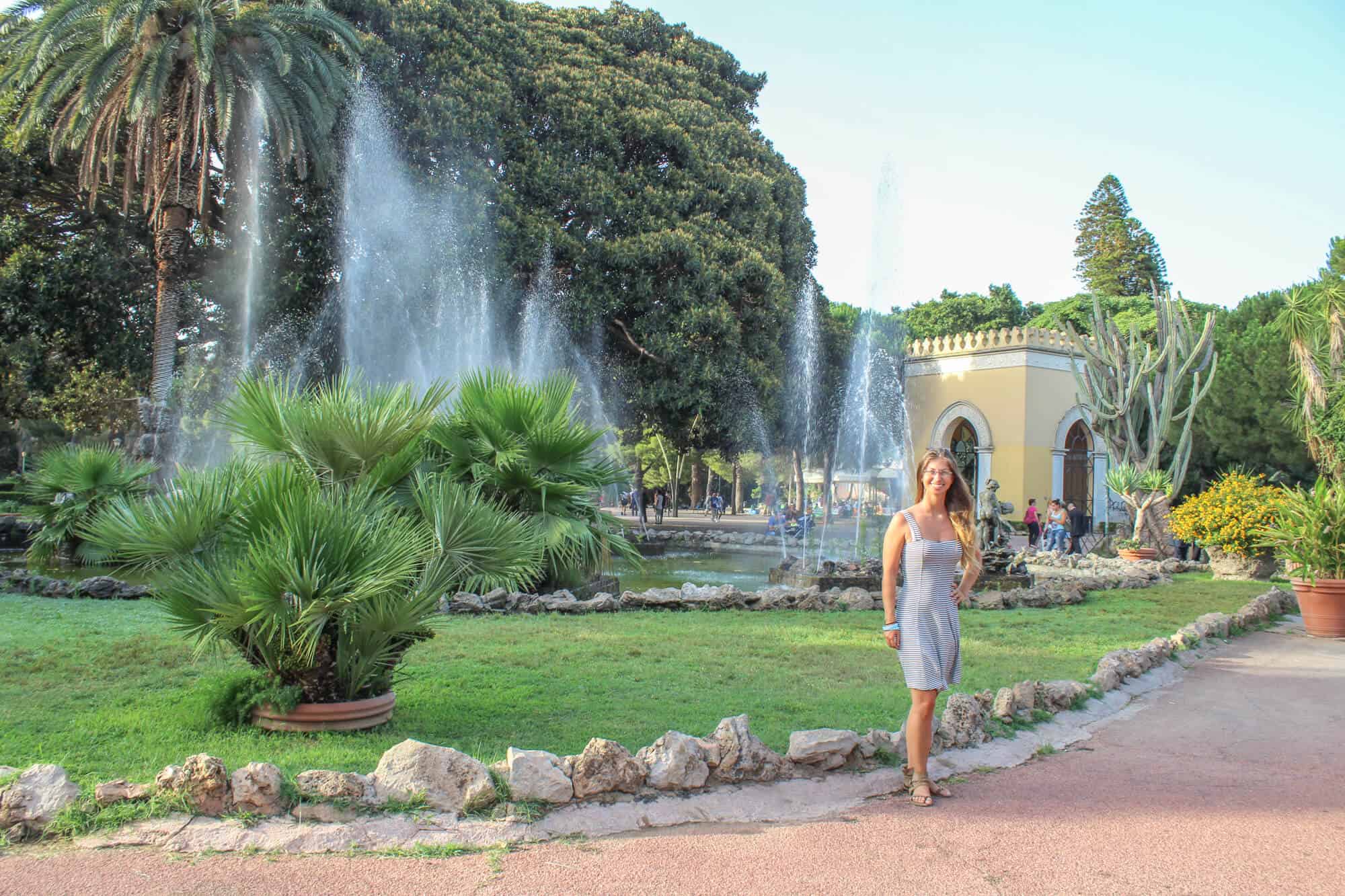 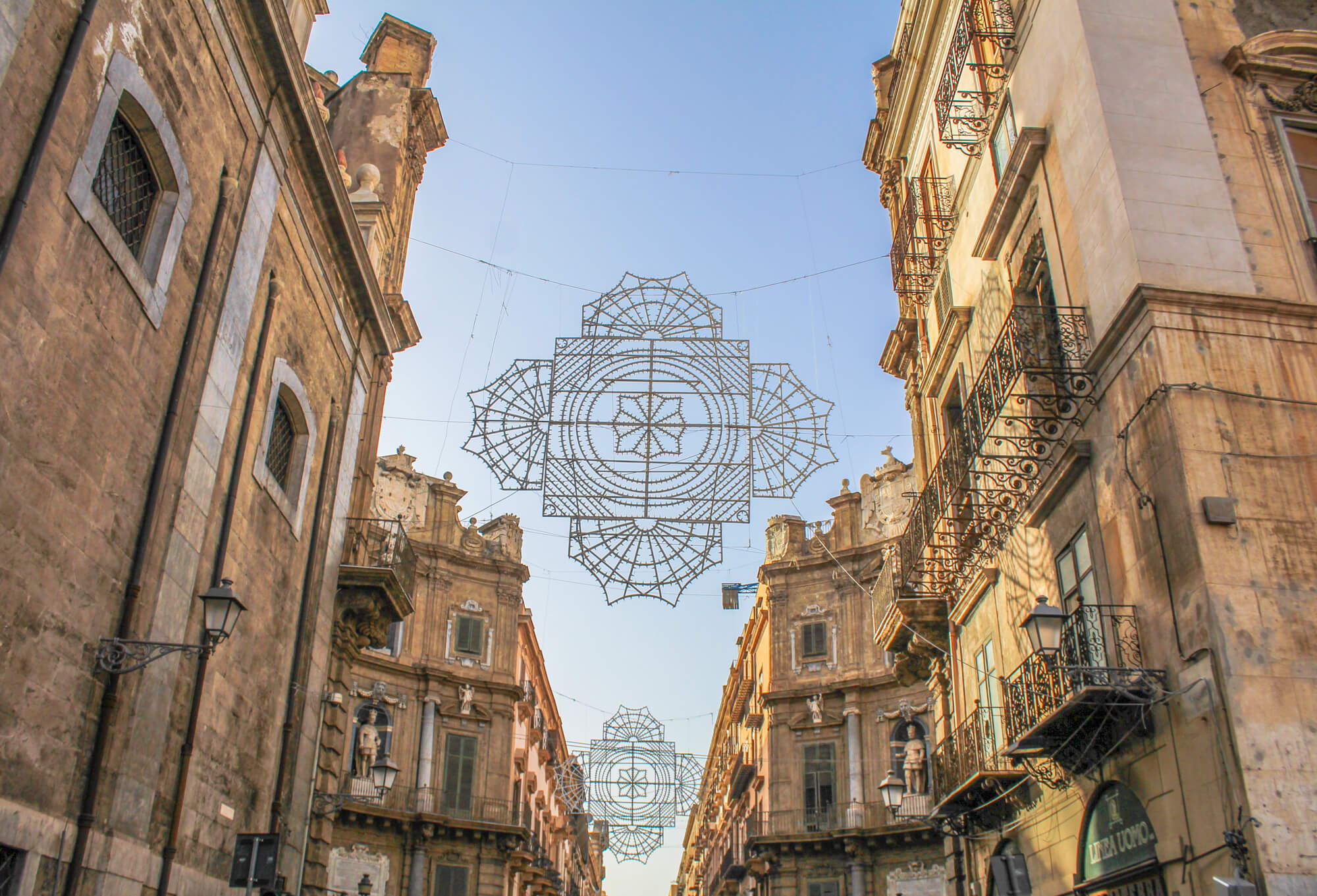 What do you need to see, to do, to explore? I’ll tell you in a minute!

Let’s immerse into that wonderful world that is a mixture of different cultures, that left their tracks.

Influenced by the whole world

Palermo and Sicily belonged during Centuries to different peoples. All of them left parts of the own culture which became part of the following and so on until Sicily’s very own and special culture ended up existing. You can hear it, feel it, see it. 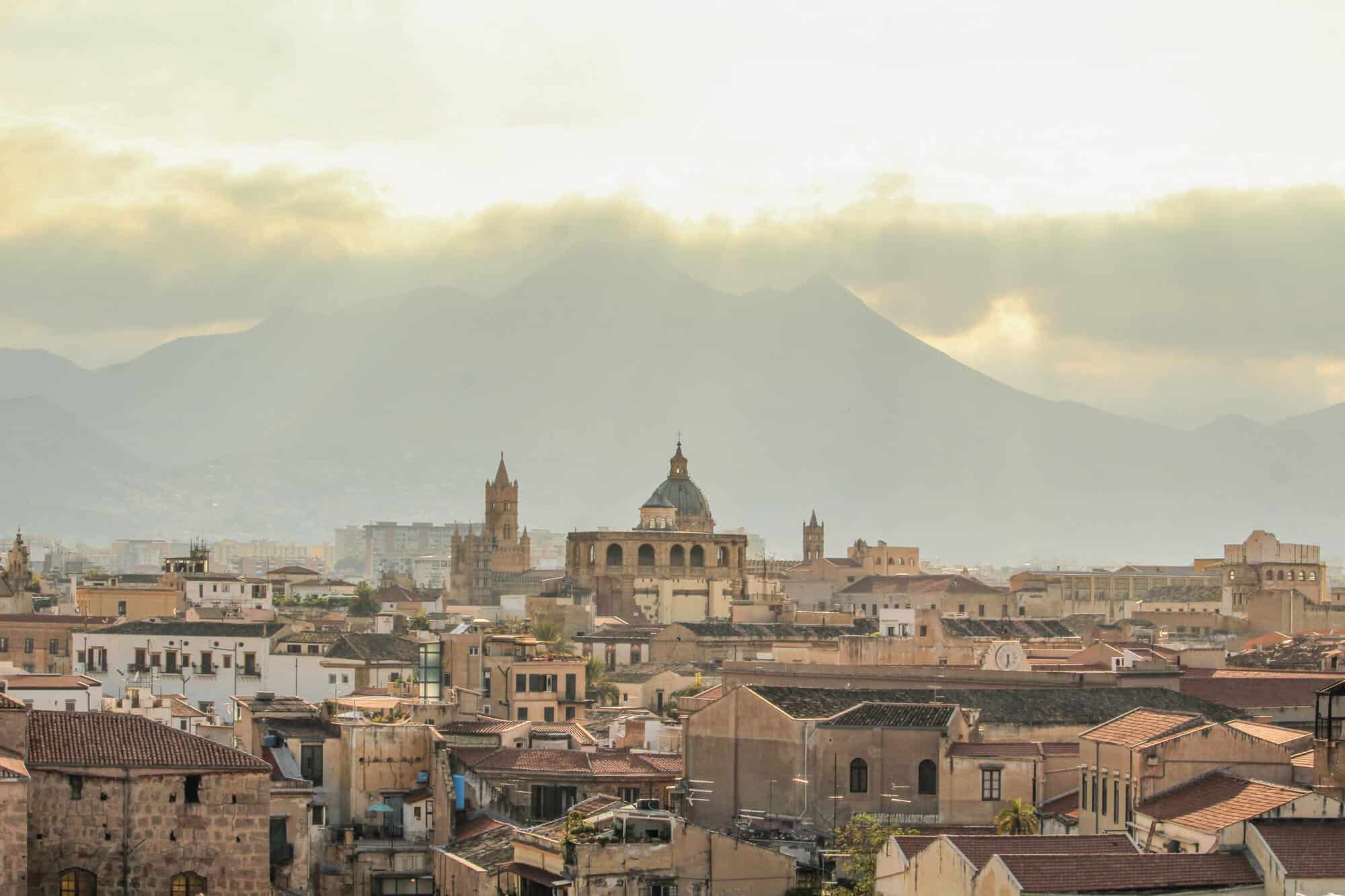 Feel it… because Palermo just feels differently than the rest of Italy. It may be the climate which is giving Palermo around 8 months out of 12 of summer. The other 4 are spring. Or it could be the typical south Italian happiness. But I can assure you that being in Italy feels different.

See it… because in contrast to the architecture in the rest of Italy the buildings in Palermo have strong influences of the Arabic and Norman style. So they differ drastically from other cities like Florence, Milan or Rome. 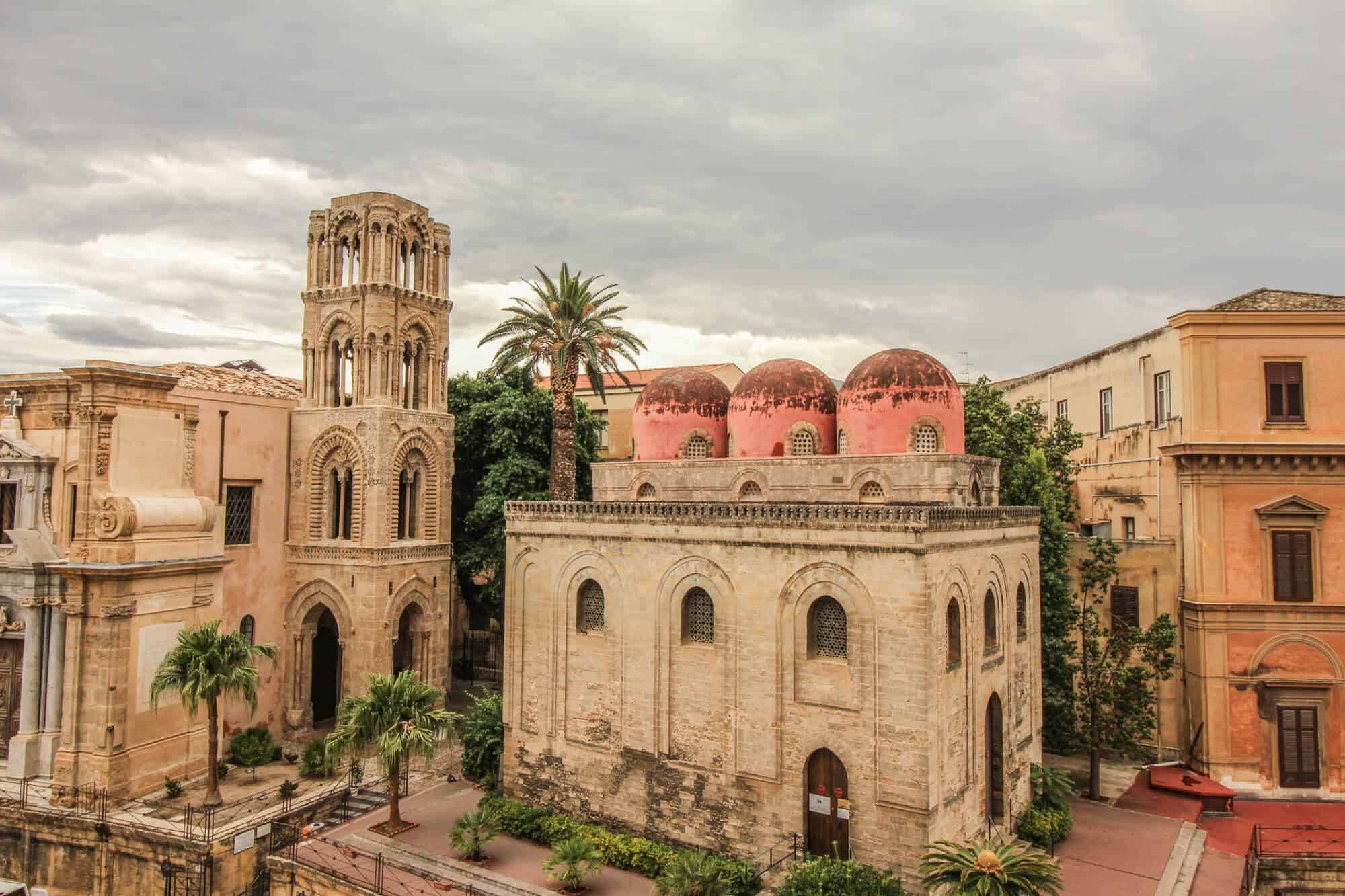 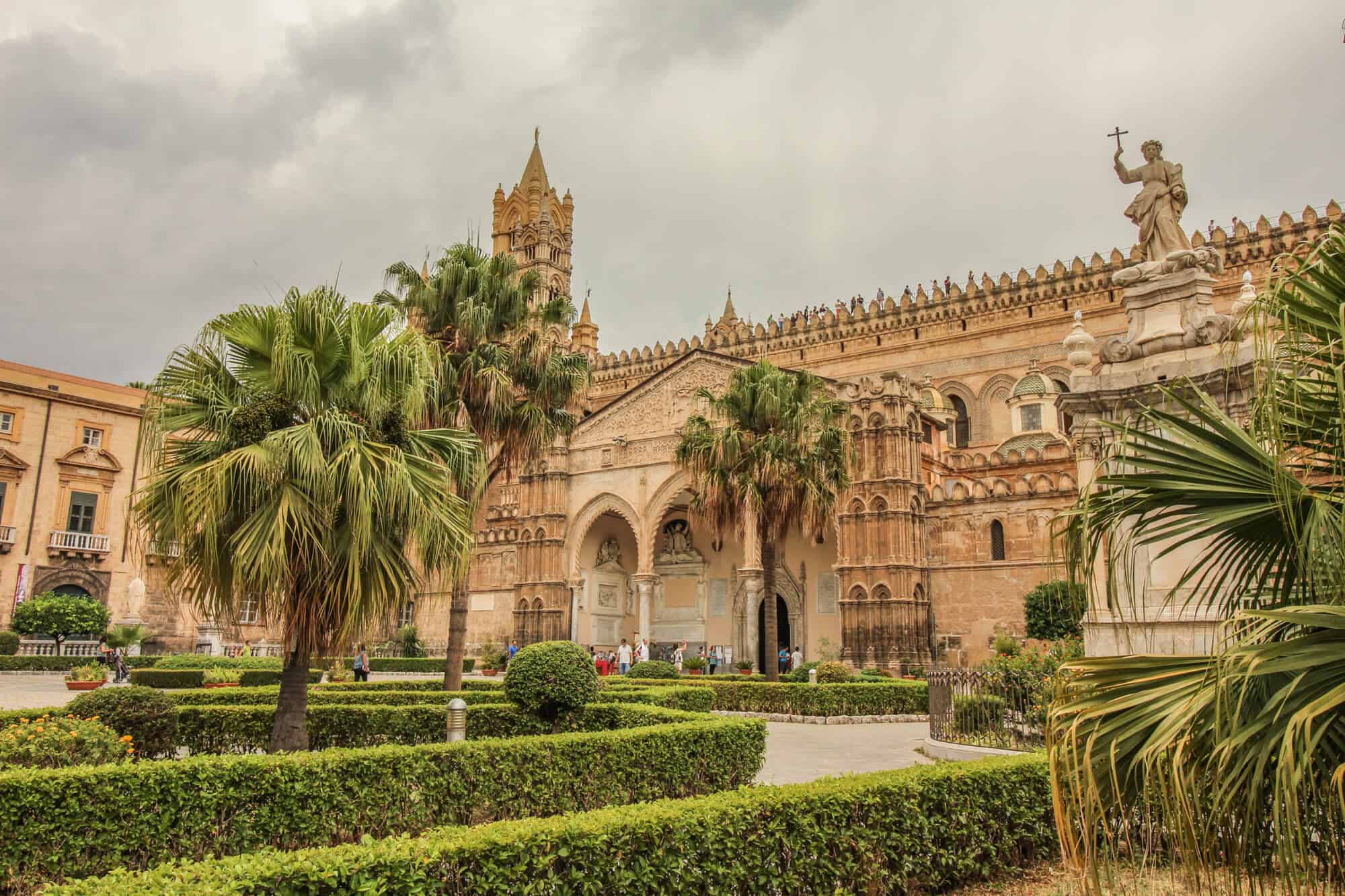 My 5 Favorite Places in Palermo 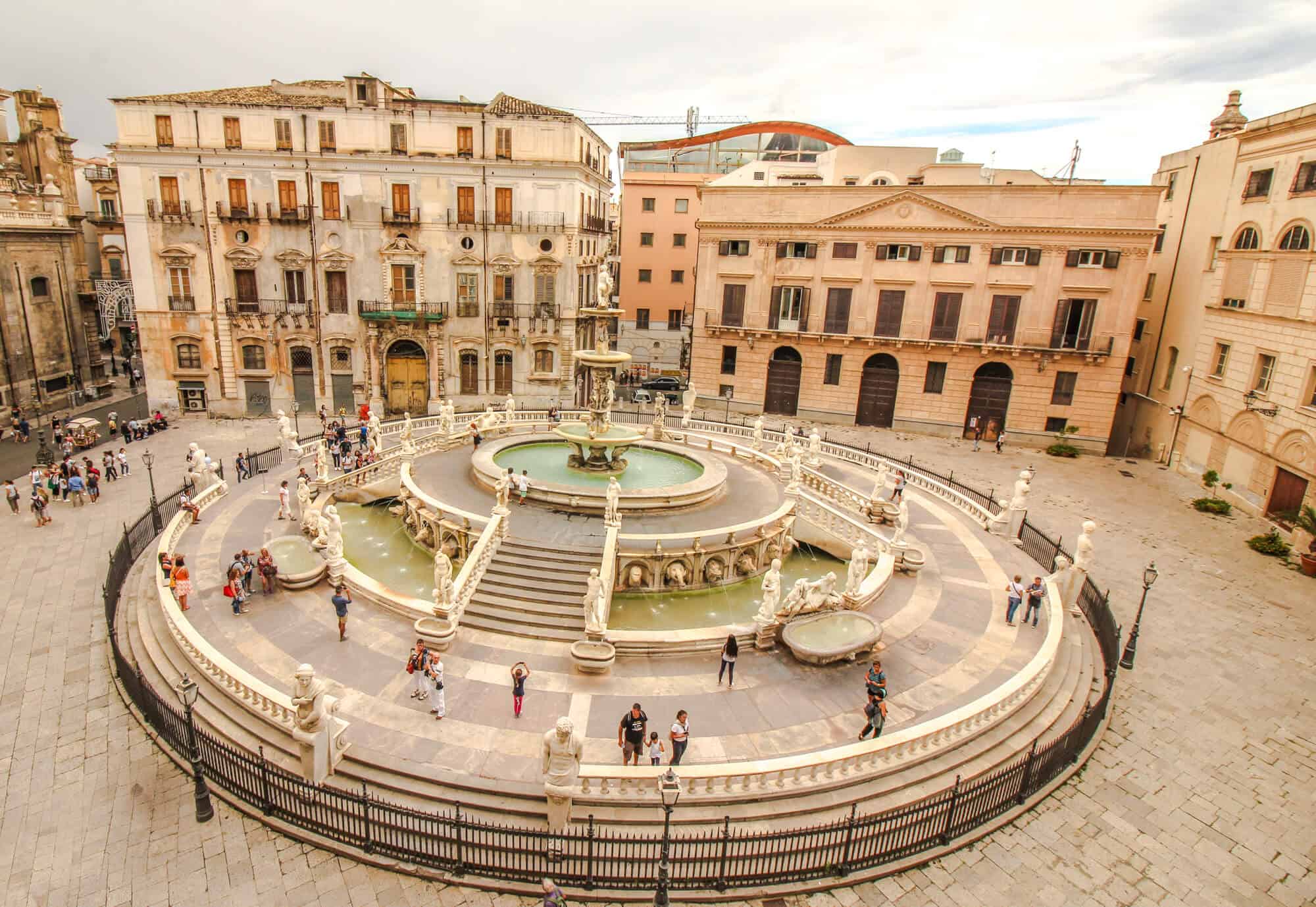 Piazza Pretoria or Piazza della Vergogna (Square of Shame) is located directly in the heart of the historic center. The epithet comes from the naked statues that surround the fountain in the middle of the square. Next to it there is the Town Hall of Palermo. I always liked the fountain with the funny story of its name. 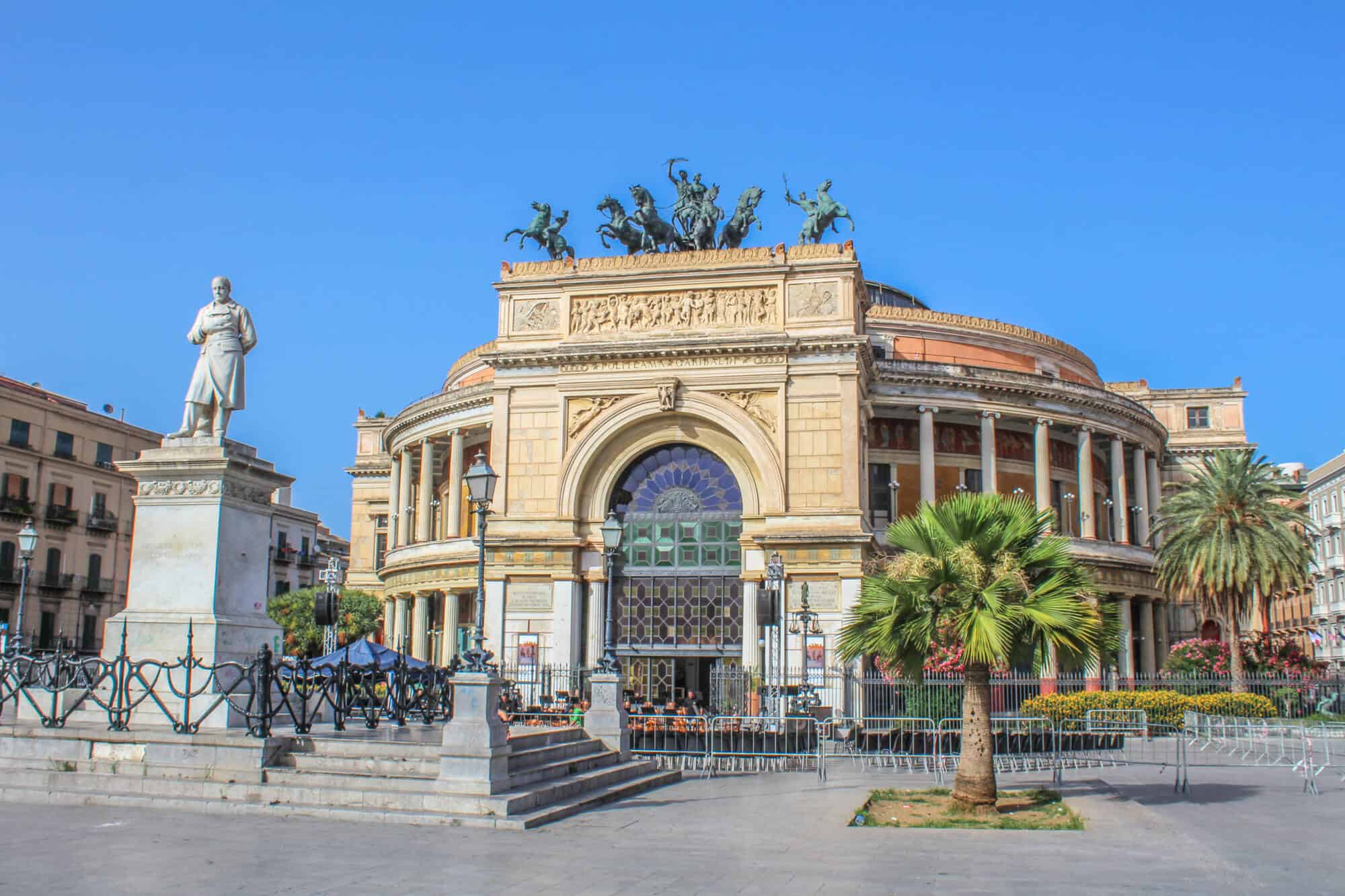 The Teatro Politeama is making me smile every time I see it. Although the Teatro Massimo – the biggest opera in Italy – is way more impressive with its size and history, I often find myself sitting in front of the Politeama, but never in front of the Massimo thinking of whatever comes to my mind.

In the small town of Monreale, high up in the mountains next to Palermo, there is a Dome. It’s impressive from the inside and from the outside.

The special thing about it is that people used gold leaf to decorate the whole area of the altar which is creating an extraordinary golden light and the impression of power. It was used as a model and copied in a smaller version for the chapel of the prince Federico II. in the Palazzo Normanni (the Norman Palace in the city center of Palermo, where the princes of Palermo resided). 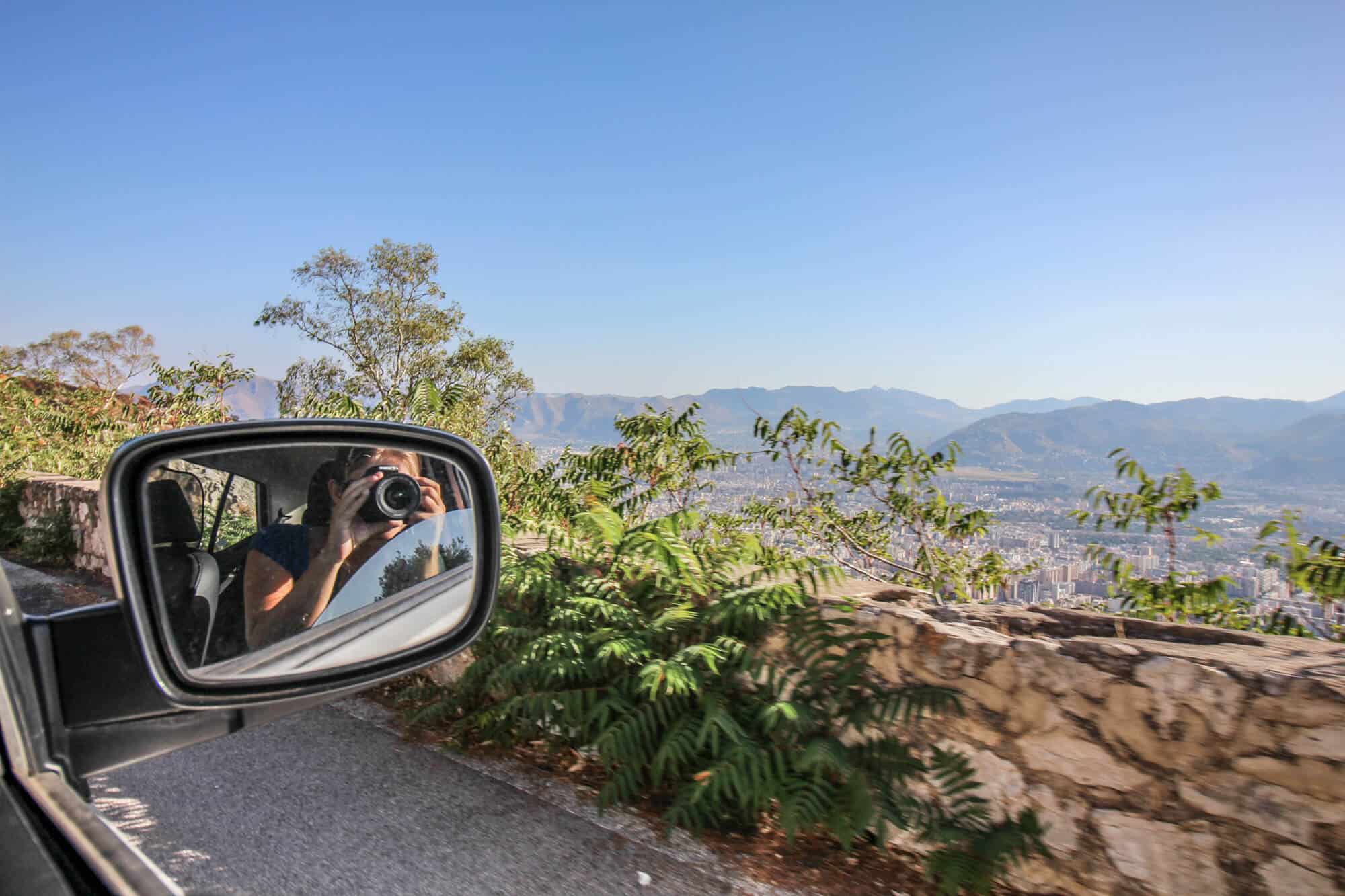 On the Monte Pellegrino there are two Highlights waiting for you:

On one hand side there is the sanctuary of the patron Saint of Palermo, Santa Rosalia. It is built into the mountain so the main part of the Sanctuary consists of fieldstone. The light is therefore artificial which is creating a really special atmosphere. 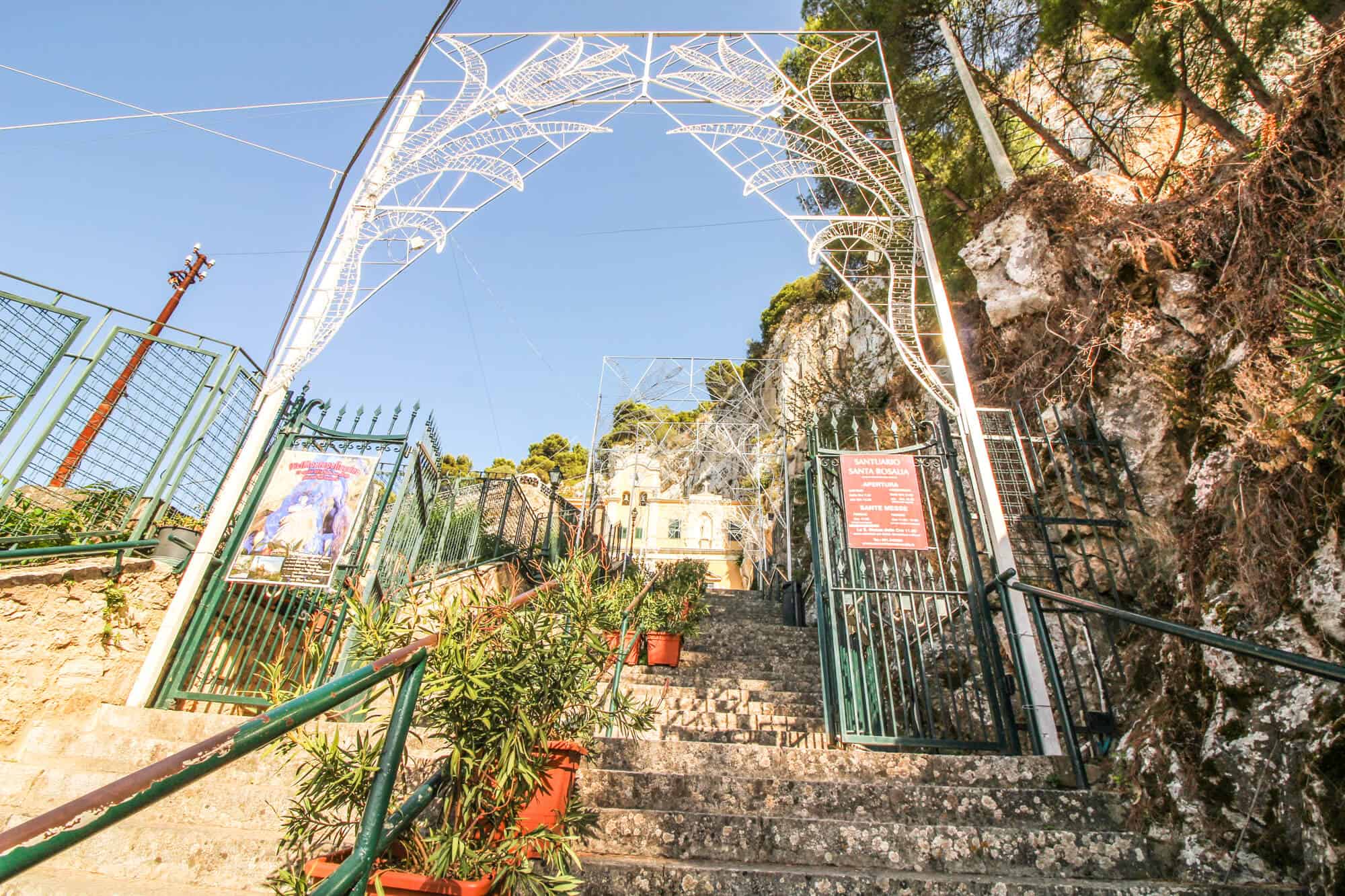 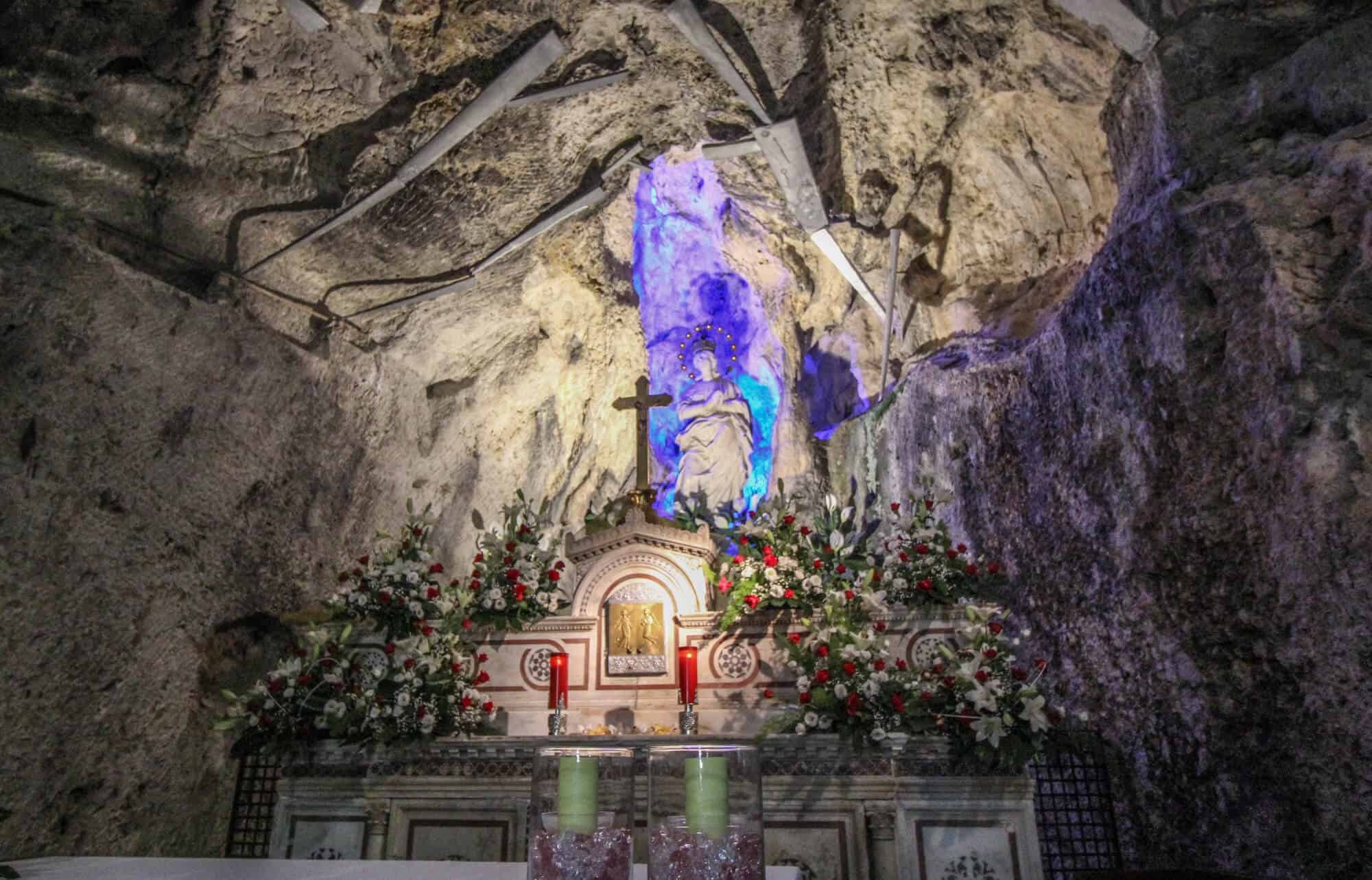 The second highlight is along the street. If you arrive by bus to the Monte Pellegrino, you will need to walk around 29 minutes to walk there. By car it’s a 5 minutes drive. It’s a big platform at the edge of the mountain where you have an amazing view over Palermo. From the other side the view is good as well, but I am not sure about what it is that you see. It’s not Mondello I think. 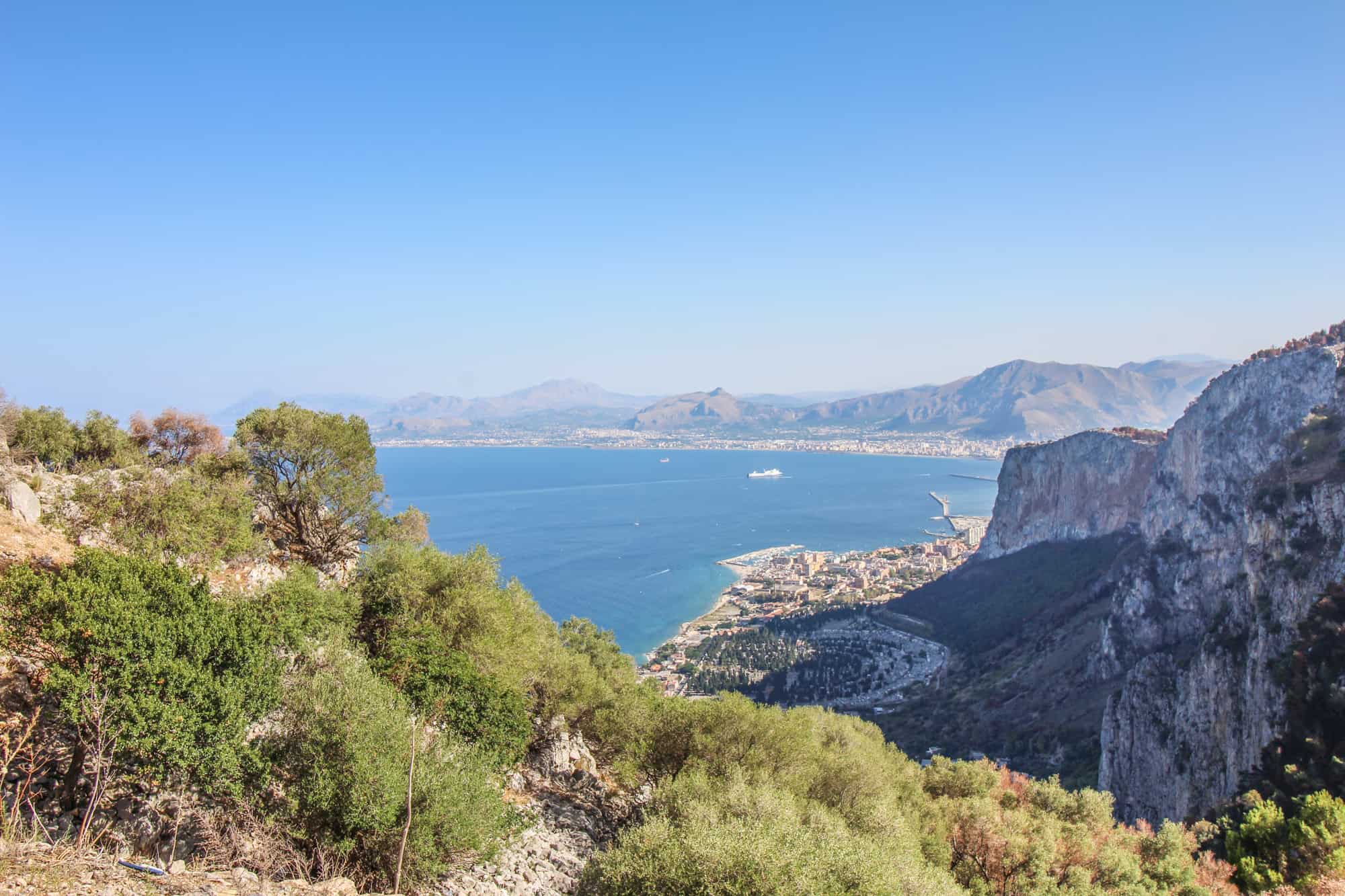 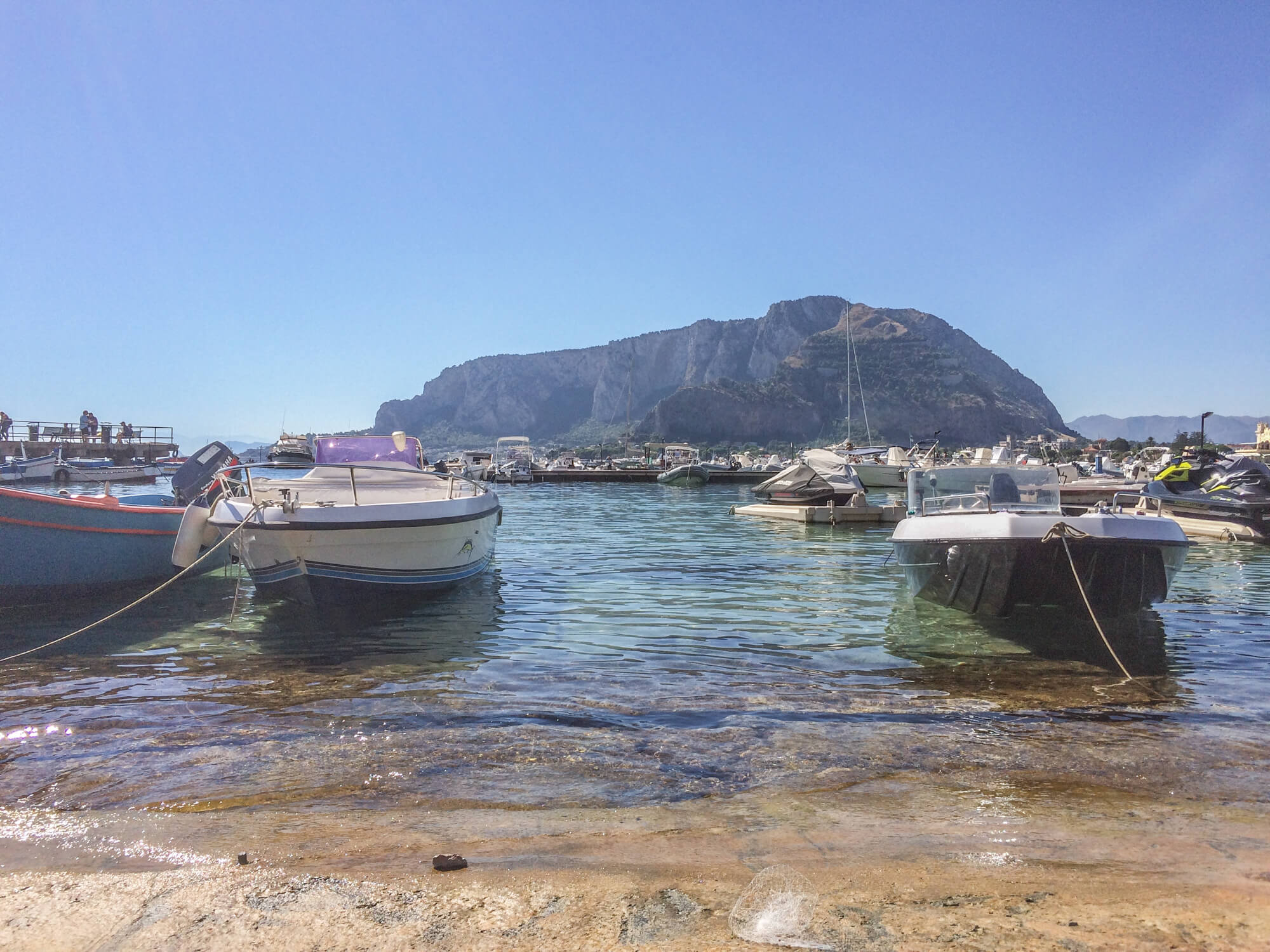 Mondello is a village, a former fishing village, which has become one of the most touristy places of Palermo. In high season you can’t even move here. Because everybody wants to get some sun at one of the most beautiful beaches of Italy and go to one of the famous restaurants with the freshest fish and the best sea food.

I love coming here in October when it’s not that crowded anymore, but it’s still super good weather. I just stroll along the promenade then and watch the Monte Pellegrino.

From this side, the mountain looks like a sleeping dog (have a close look and you will see it in the photo). That’s why I was always fascinated by it – sind I was a child.

When do you fly to Palermo?

Could I convince you of the unique beauty of Palermo? Just hit the reply button if you have some more questions! If not: Safe travels!

The Palermo Guide for Digital Nomads

EUROPE
THE MOST BEAUTIFUL PLACES IN THE NORTH WEST OF SICILY

EUROPE
SPOTS TO WORK IN PALERMO