Things to do in Bamberg – 8 Tips for Your Day Trip

Two weeks ago my friend Katrin from beforewedie.de asked me if I would like to go on a spontaneous day trip to Bamberg with her. First of all, I have never been to the city in Upper Franconia before and secondly, I thought that an article about things to do in Bamberg would fit perfectly on my blog. So I said yes!

Bamberg is the largest medium-sized city, i.e. a city with 20,000 to 100,000 inhabitants, in Bavaria. To be more precise, it is located in Upper Franconia and is known above all for its old town, which is first of all in impeccable condition, as it was spared from bombing during World War II. And secondly, it has been a UNESCO World Heritage Site since 1993. Bamberg is also known nationwide for the art of brewing beer.

By the way, Bamberg was first mentioned in 902, almost 100 years before the first turn of the millennium. Under Henry II the city reached its first heyday and so the cathedral was also named after the Roman-German emperor: namely Heinrichsdom.

The city is located on the Regnitz river, which gives it additional charm and without it the things to do in Bamberg such as Little Venice or the Old Town Hall would not even be possible.

Since Bamberg was built on seven hills, the city is nicknamed Franconian Rome. The hills are called: Stephansberg, Kaulberg, Domberg, Michaelsberg, Jakobsberg, Altenburg and Abtsberg. On my day trip, I was on six of the seven hills. How I managed it in such a short time, I’ll tell you below. 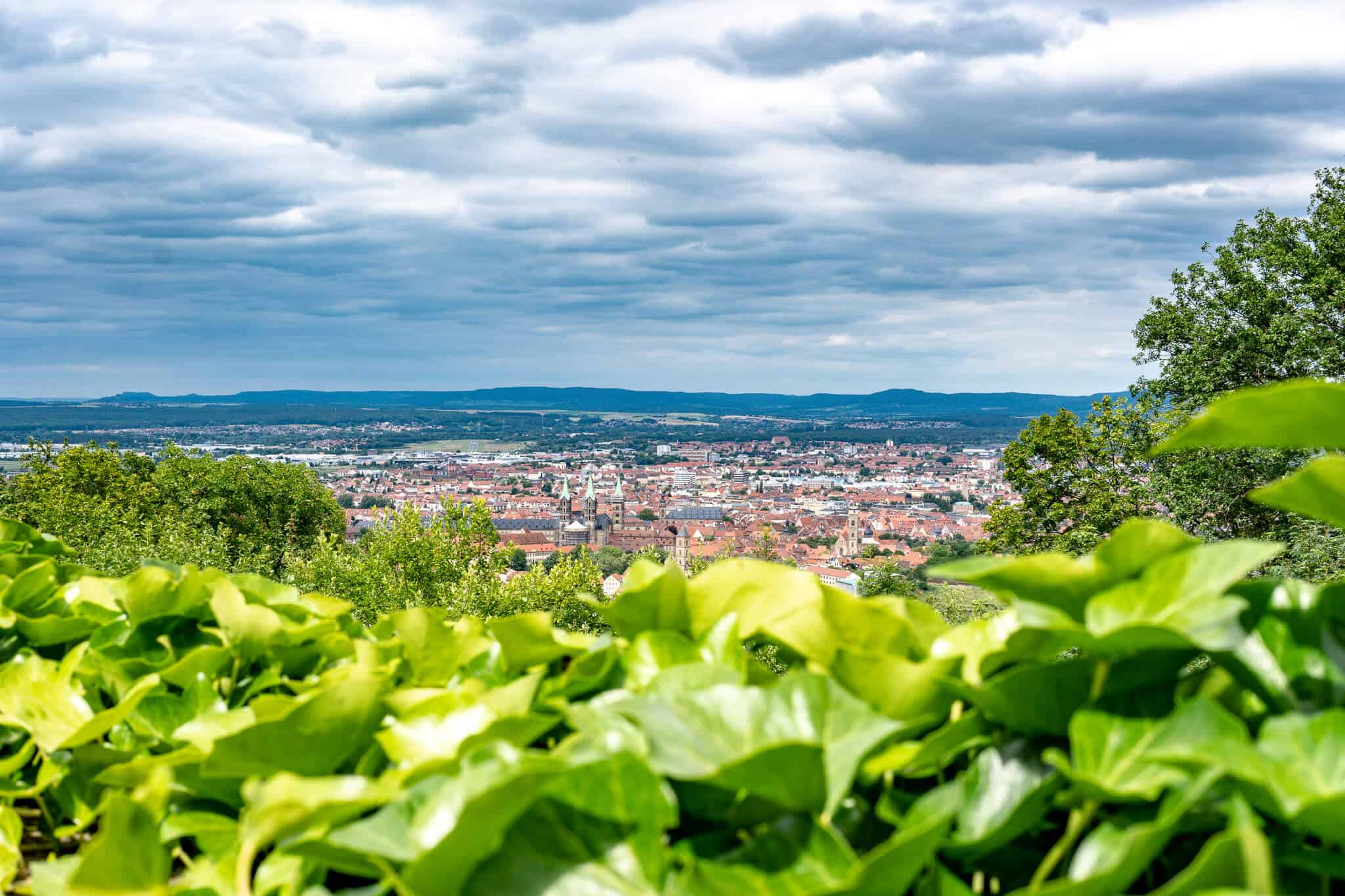 How to Get to Bamberg

Bamberg is well connected in every respect and therefore easy to reach:

Things to do in Bamberg

You’re literally spoilt with things to do in Bamberg: 1200 monuments alone are waiting for you! And this, although the city is relatively small and easy to explore on foot. There are also many churches. The exact and surprisingly high number was mentioned during the 6-hill tour I took part in. But unfortunately, I forgot it. The reason why so many churches had been built was that in former times you were only allowed to build a brewery in Bamberg if you had built a church. Interesting reason…

But now let’s come to the things to do in Bamberg, which I visited during my day trip and which you can also visit easily if you only want to make a short trip.

Bamberg Cathedral was built at the time of the first turn of the millennium: The Heinrichsdom was consecrated in 1012, after the diocese was only founded in 1007. In the following two centuries, the cathedral burned down twice. Thus, today we see basically its third version, which was built in 1237 and is therefore late Romanesque to Gothic. 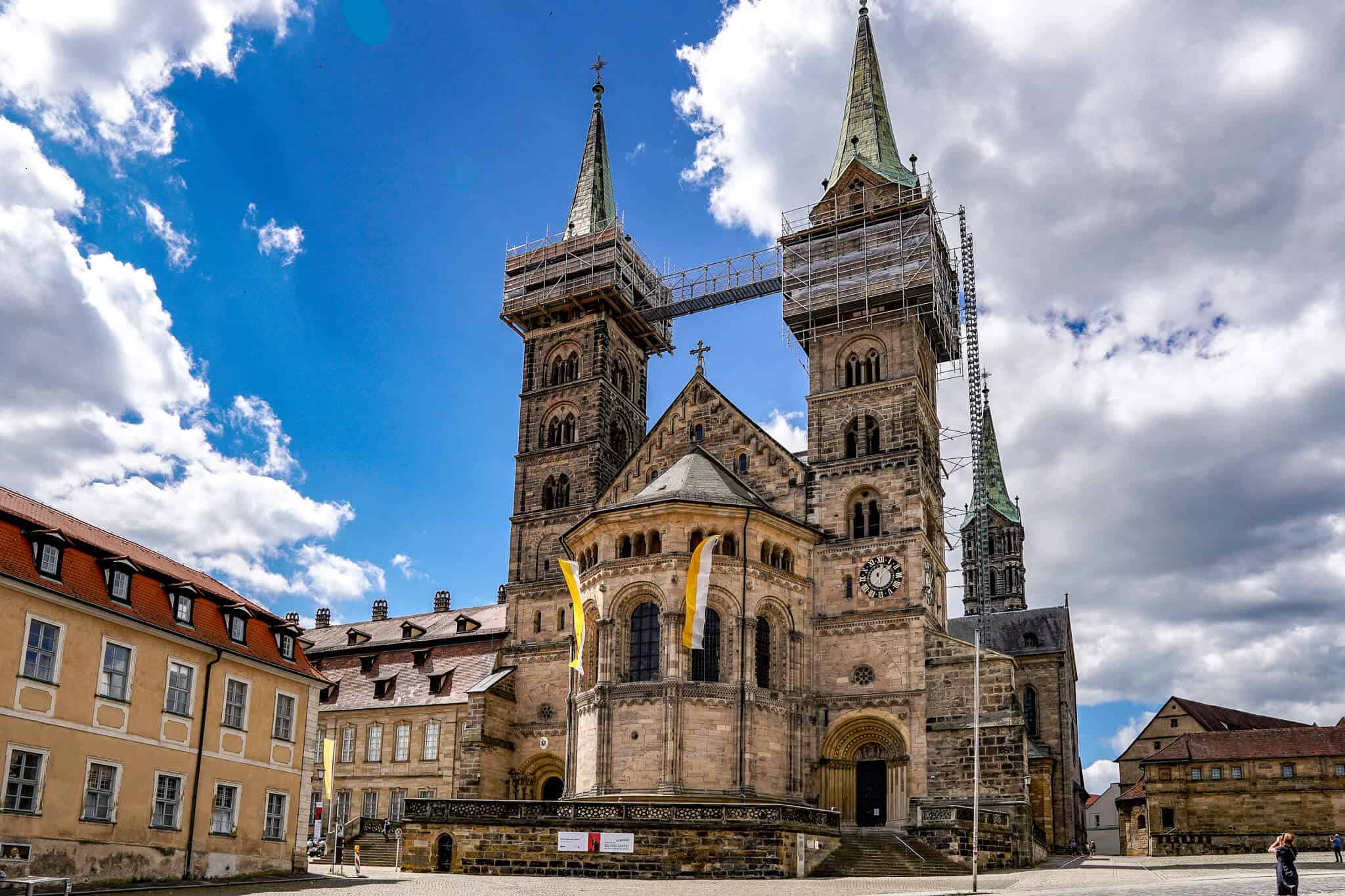 Together with his wife Kunigunde, Henry II is buried in Bamberg Cathedral. The grave is one of the sights. There are also some sculptures in the cathedral which have gained fame, among them the Bamberg Horseman.

The Cathedral of Bamberg is worth a visit both from the inside and the outside. However, I was there on a public holiday, so that I could not look around the interior for long and take many photos. Therefore, I could only take one quick photo from the inside: 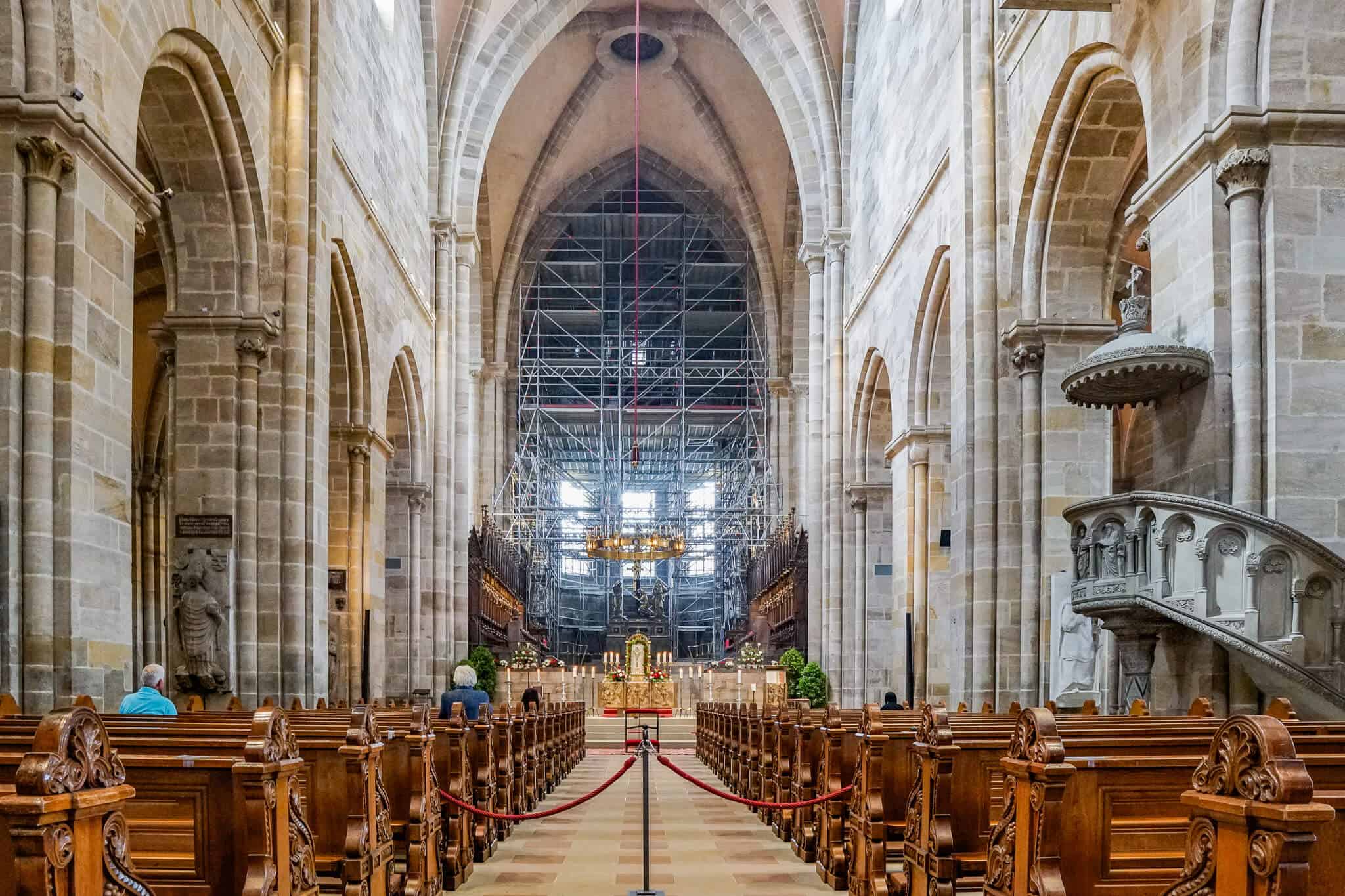 The Alte Hofhaltung (Museum of History)

This historic building complex is located directly next to the cathedral and consists of former residential and farm buildings of the diocese, which were built from the 15th century onwards. The residence of the bishop was also located in the previous building called Castrum Babenberg.

Today, you will find here the Historical Museum and the Cathedral Masons’ Lodge. In summer, the so-called Calderon festival is also held here.

By the way, the inner courtyard was the setting for the movie “The Three Musketeers” with Orlando Bloom in 2011.

The New Residence is also located on the Domberg, just opposite the Cathedral and the Alte Hofhaltung. Numerous masterpieces from the furniture, paintings, sculptures and textiles await you here. These date back over four centuries. On a free tour you can take a look at the Kaisersaal, the Staatsgalerie of the Bayerische Staatsgemäldesammlungen and sculptures by the rococo sculptor Ferdinand Tietz. 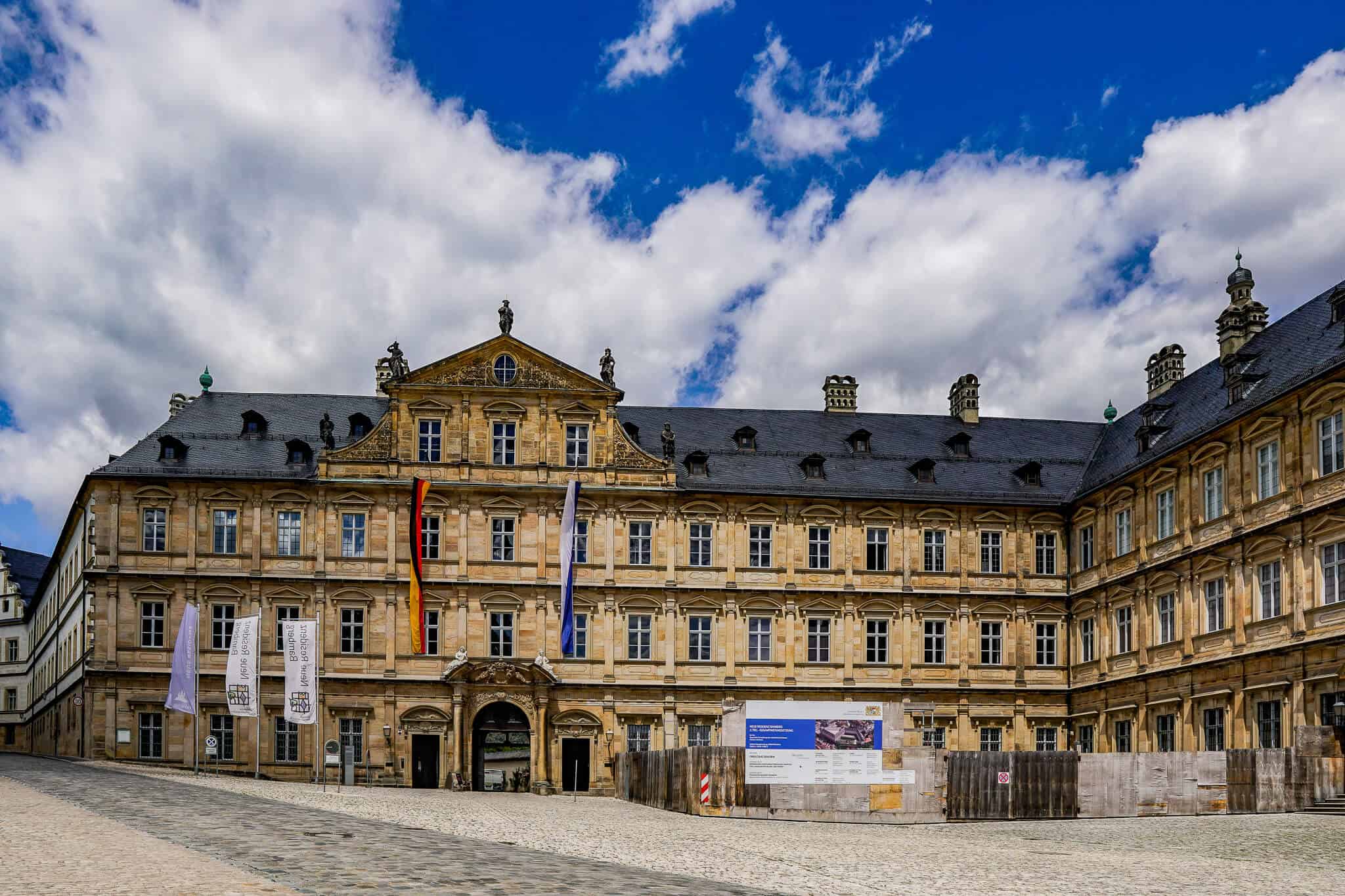 In the Rose Garden – which was originally laid out as a Renaissance garden – 4500 roses are scented. 50 different types of roses are waiting to be discovered by you. The entrance is free! The garden is bordered by lime trees and the benches between the trees invite you to enjoy the view. There is also a café, so you can quench your hunger and thirst while enjoying the view of the old town.

A path leads from the cathedral square down to the old town. When you get to a crossroads, turn right to the Old Town Hall or go straight on to Little Venice. I decided to go to Little Venice first. The advantage of going this way is that you will have a nice frontal view of Little Venice.

Here, pretty medieval half-timbered houses with tiny gardens are lined up along the Regnitz. This pretty row of houses definitely needs to be on your list of things to do in Bamberg! This former fishing village is affectionately called Little Venice and is also one of the highlights on the trip with the excursion boat (which I didn’t do). 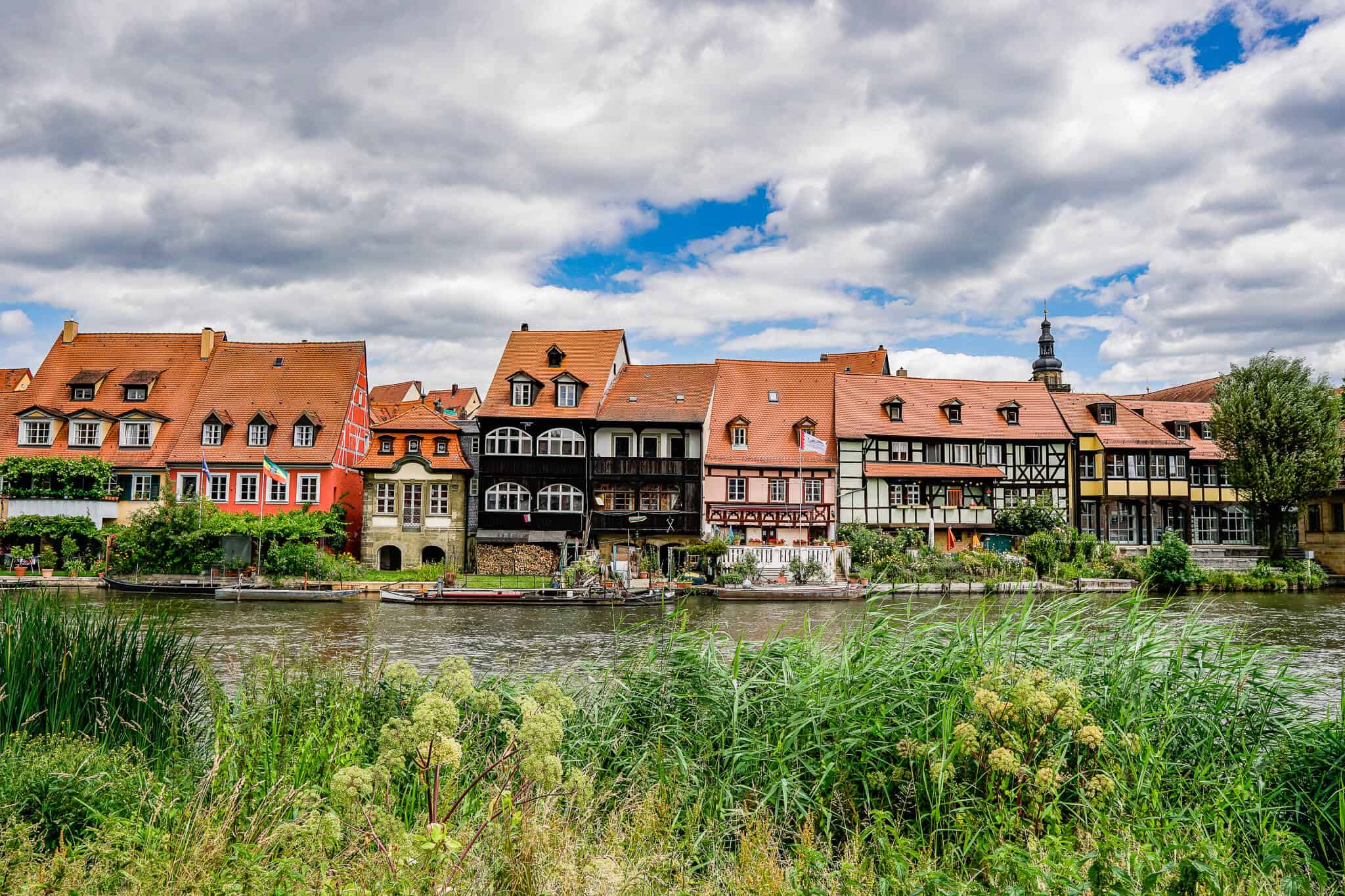 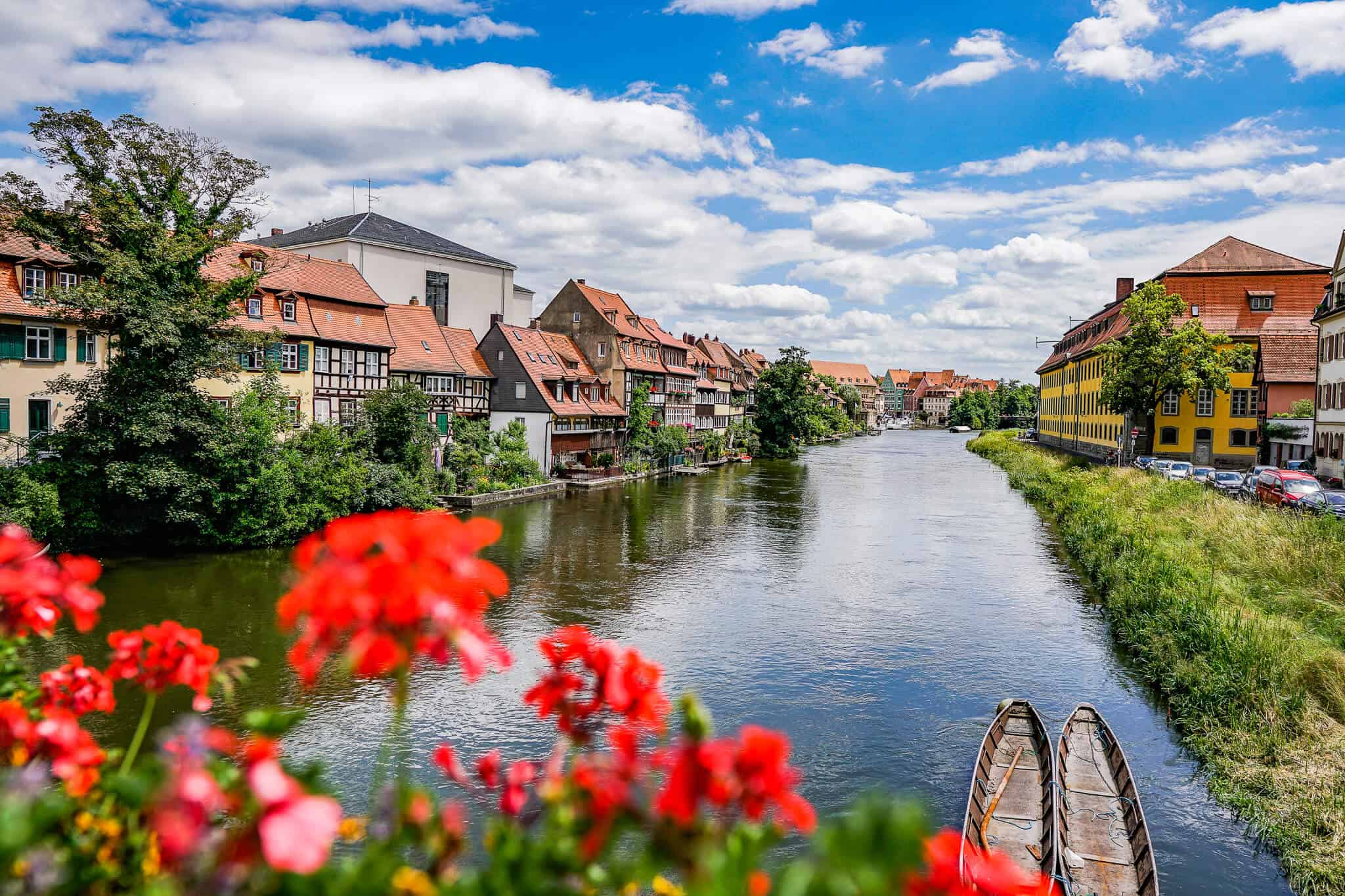 The Old Town Hall is probably the most famous architectural monument of Bamberg. According to the legend, the bishop did not want to have a town hall on his land. So the citizens of Bamberg simply built their town hall in the river. Whether this legend has a true core, I do not know, but I like it as much as I like the town hall itself.

Today, by the way, the Ludwig porcelain collection is exhibited in there, which is one of the largest of its kind. From the outside, the paintings on the façade of the baroque and rococo building, which was repainted in 1960, are particularly impressive. 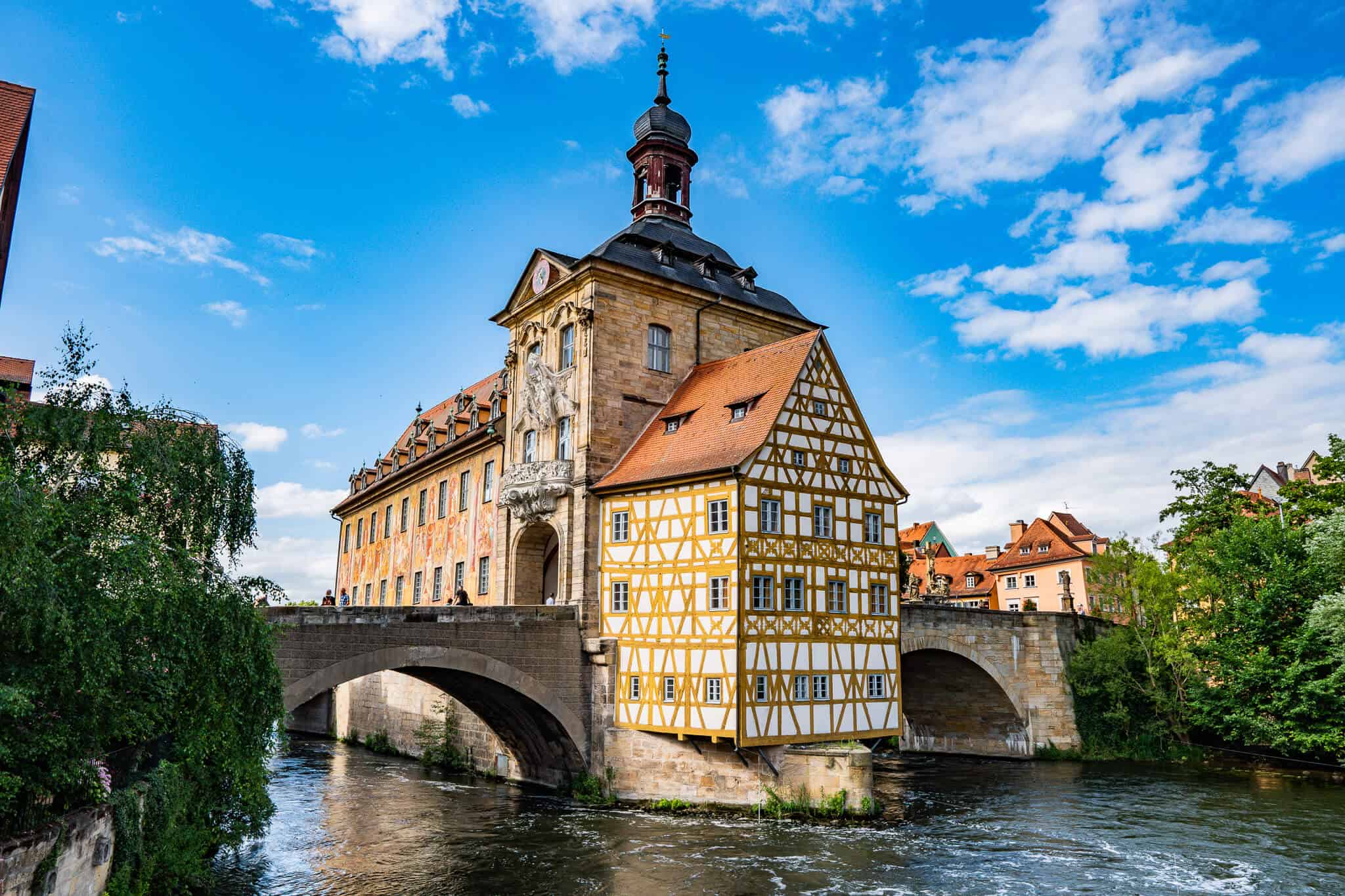 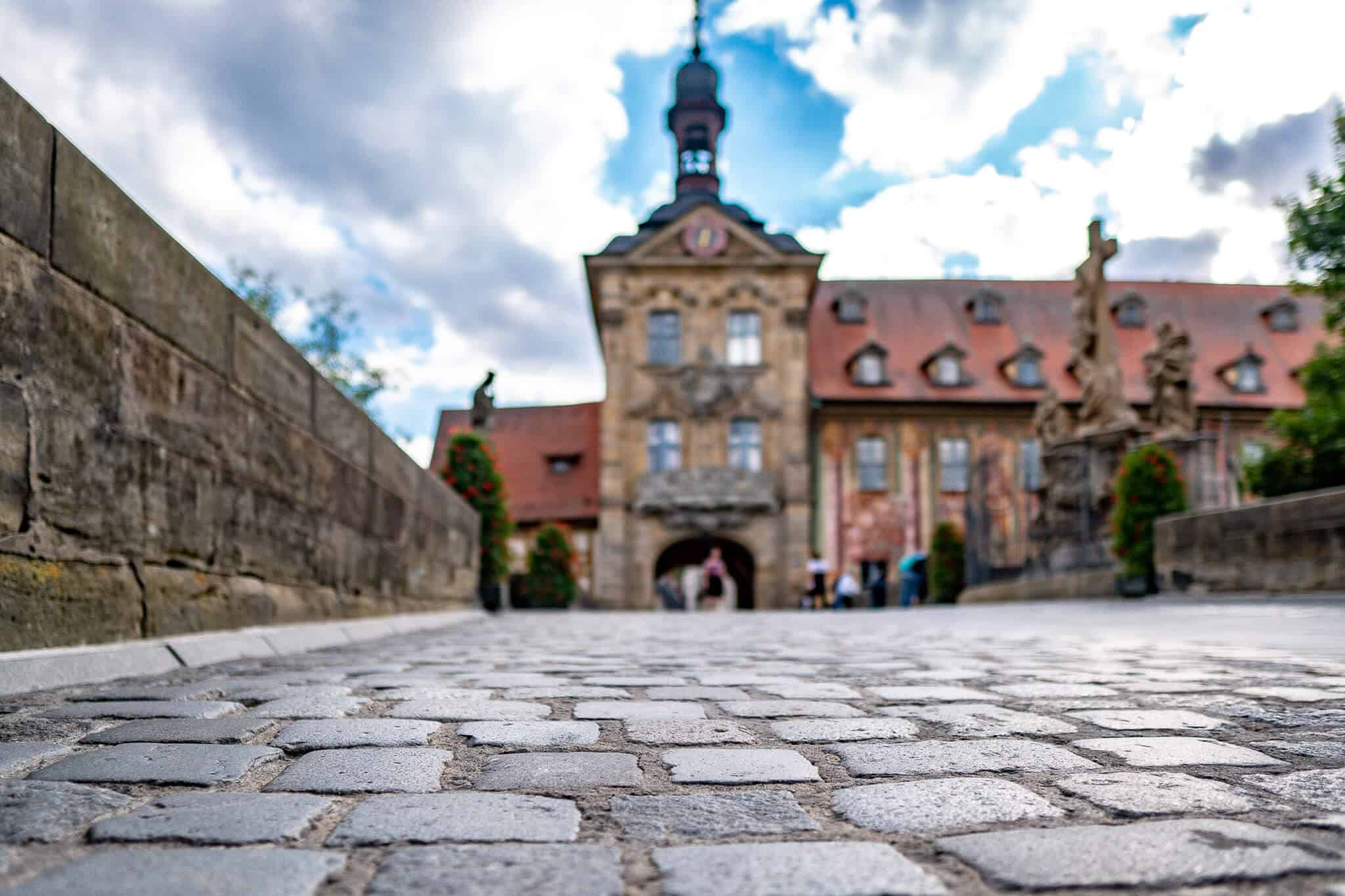 The Altenburg is a medieval hilltop castle, which the Altenburgverein takes care of. The tower at a height of 400 meters offers a wonderful view over Bamberg and the surrounding area. Unfortunately, it was closed because falcons nest there. I keep my fingers crossed that it is open when you are there! The same goes for the Burgschenke: Unfortunately, it was closed when I was there, although I would have very much enjoyed the refreshment.

The history of the castle goes back to the 12th century. So the town’s landmark has been there for quite a while…

I came here on the 6-hill tour and got off. After an hour I went on and back to the old town. But if you feel like hiking: There are also trails that will bring you here. 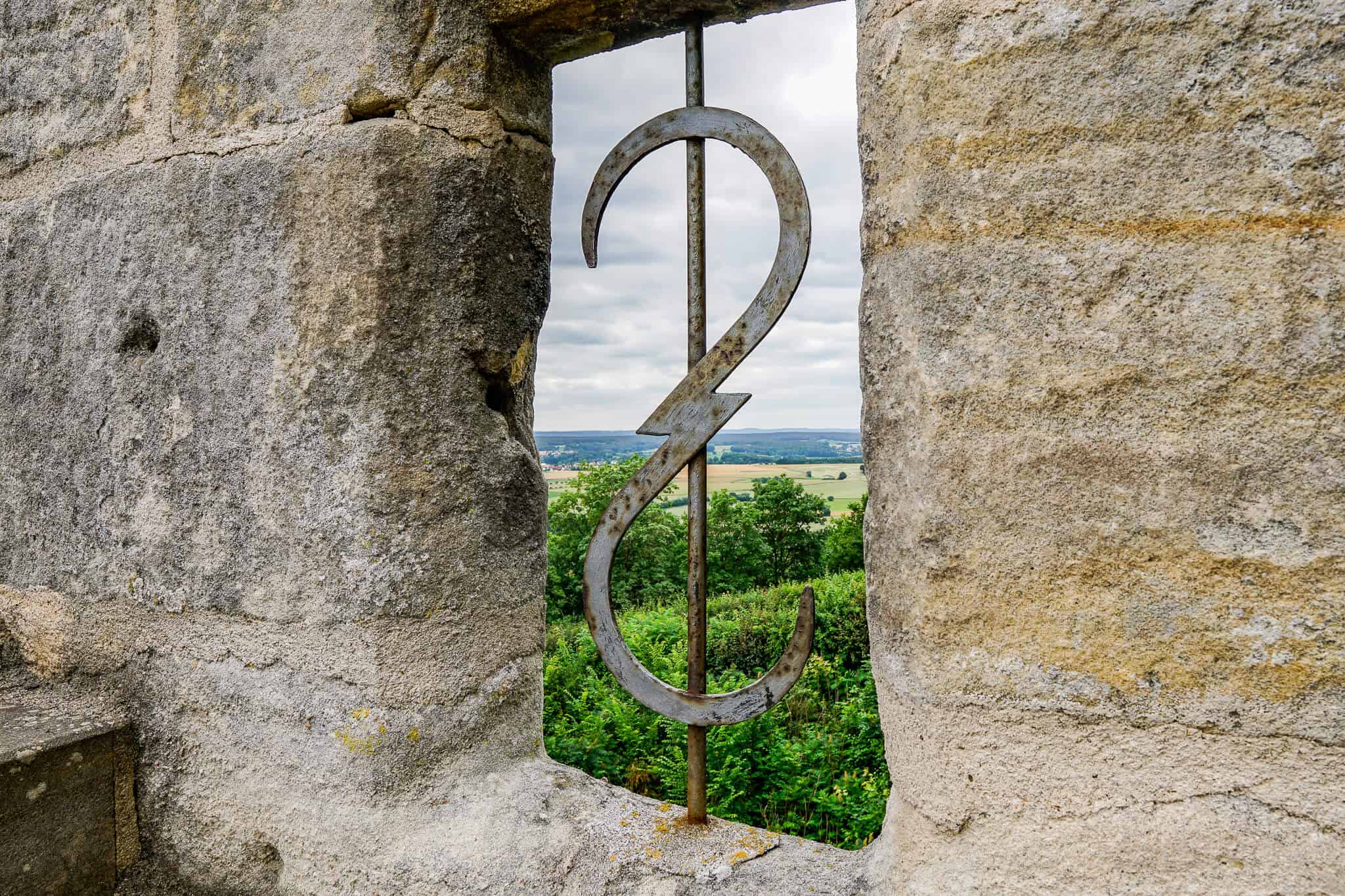 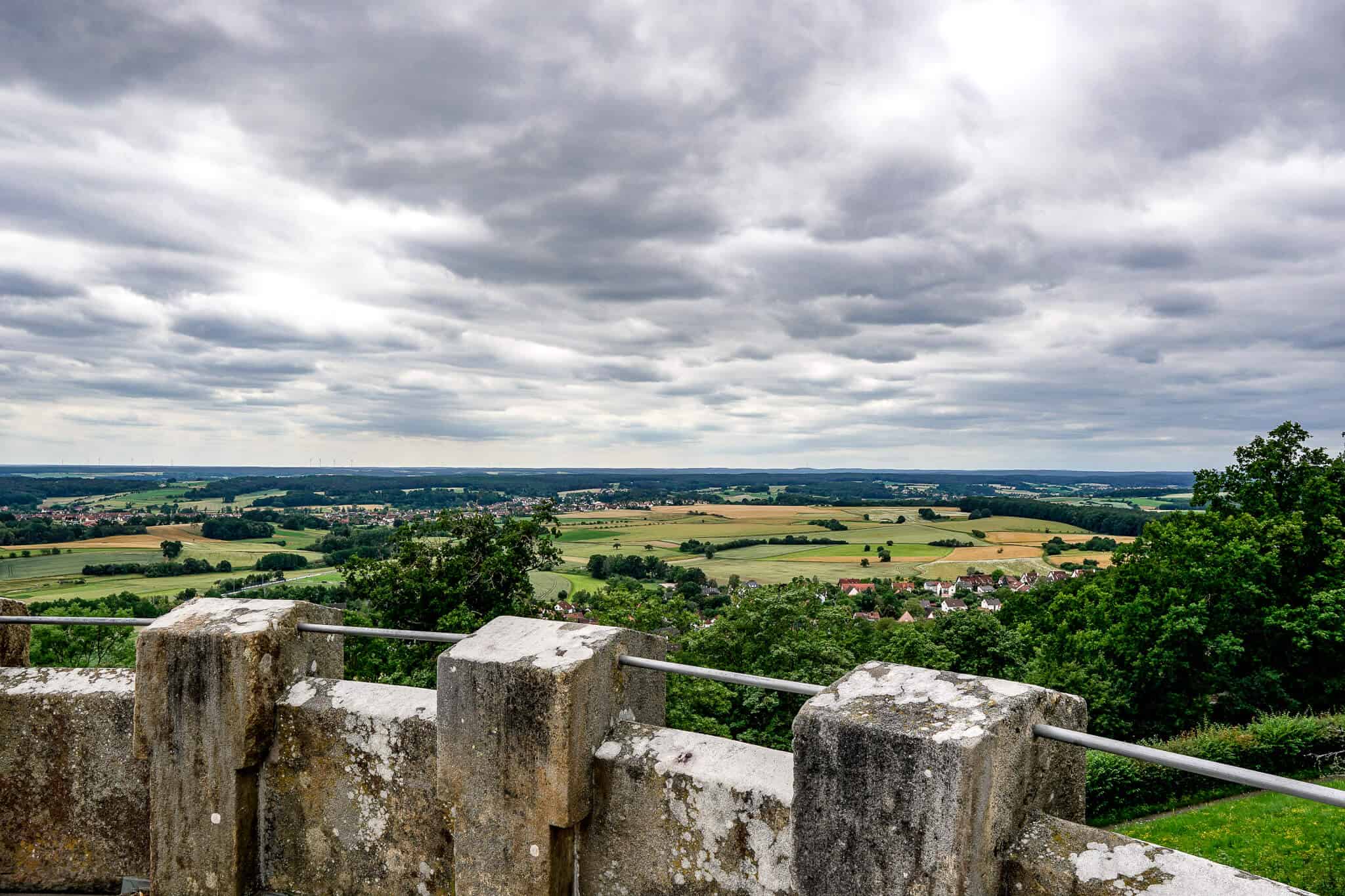 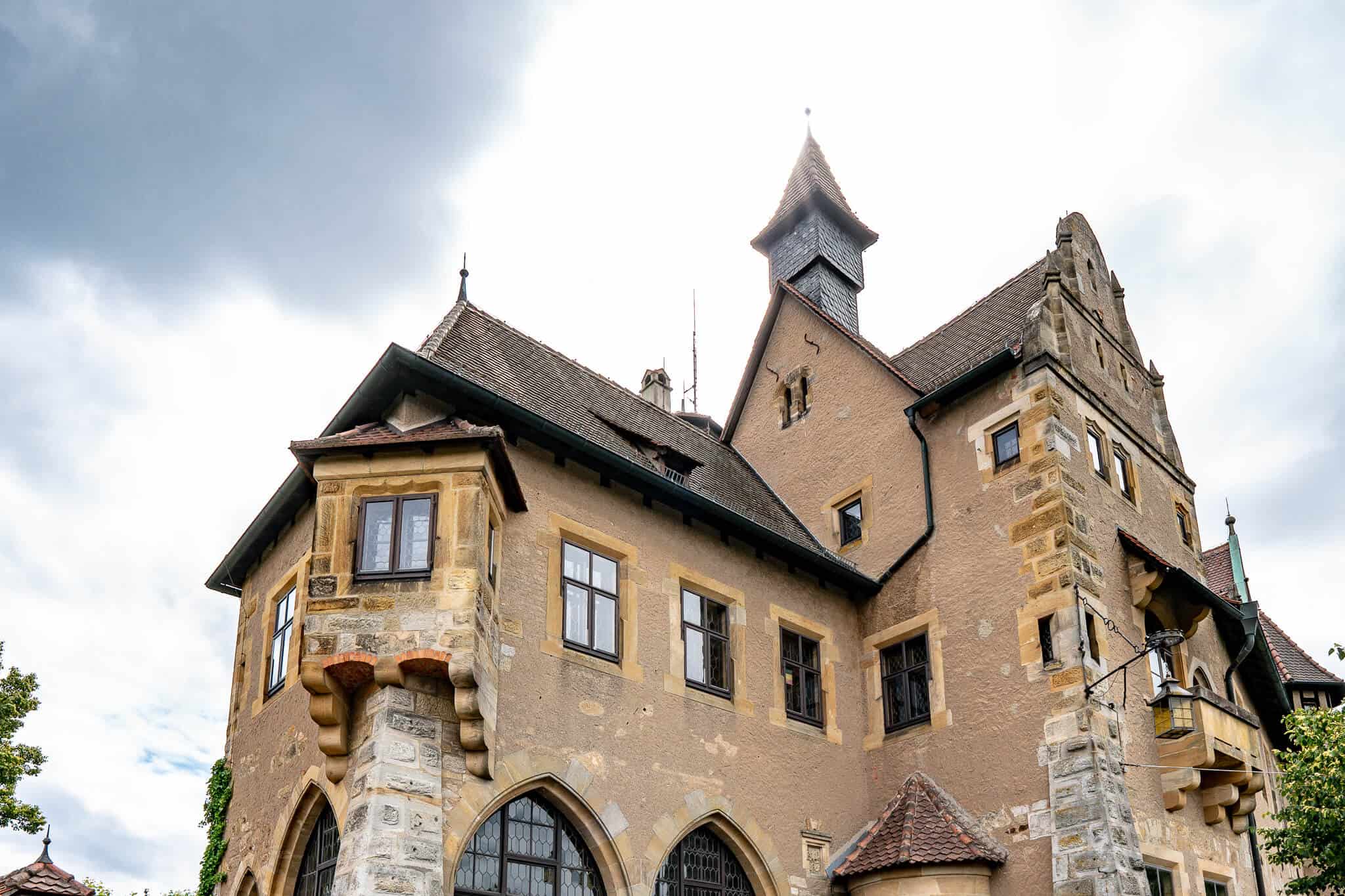 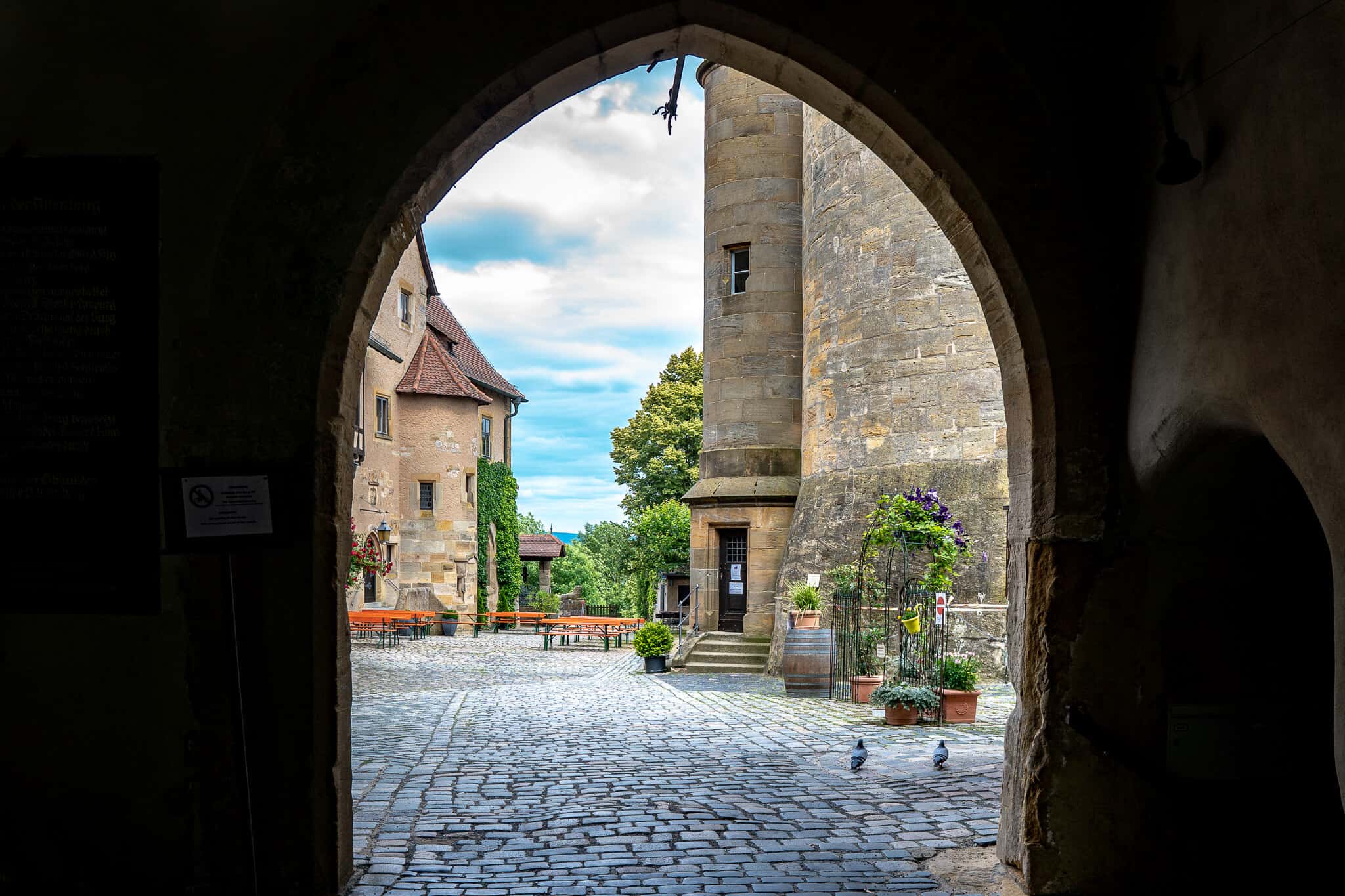 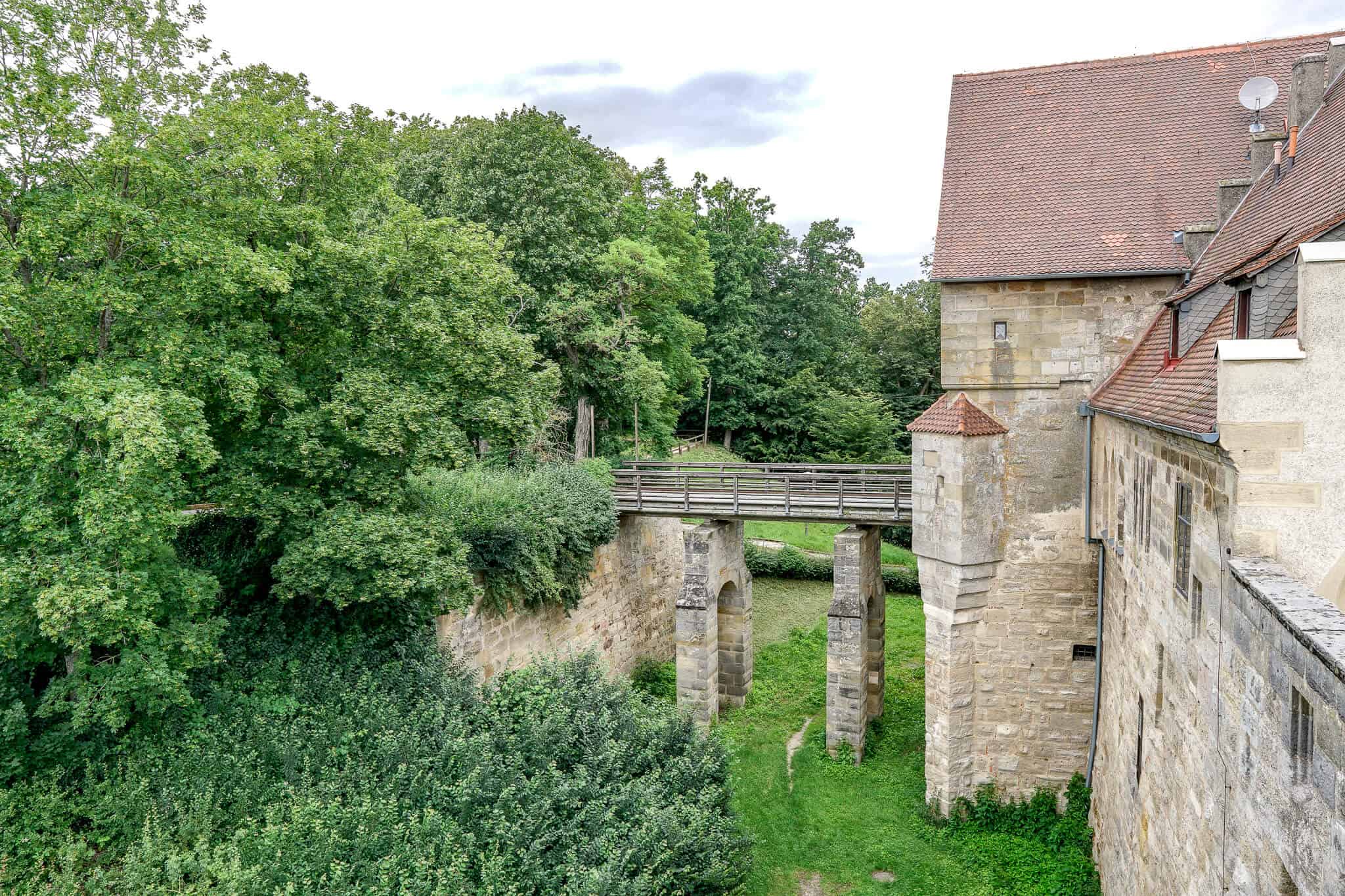 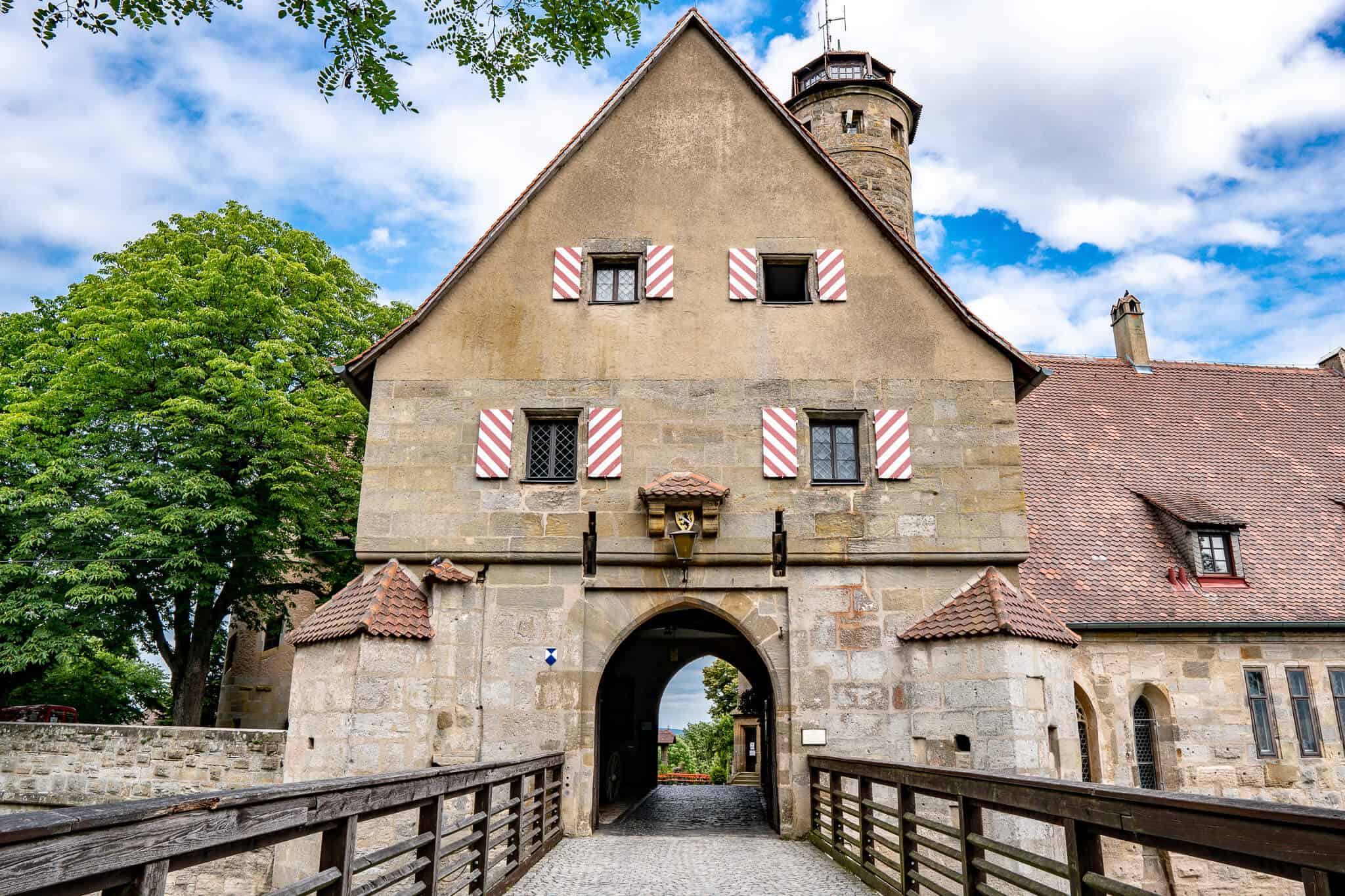 The view of the city is impressive, even if you cannot climb the tower: I took this photo from the back of the castle: 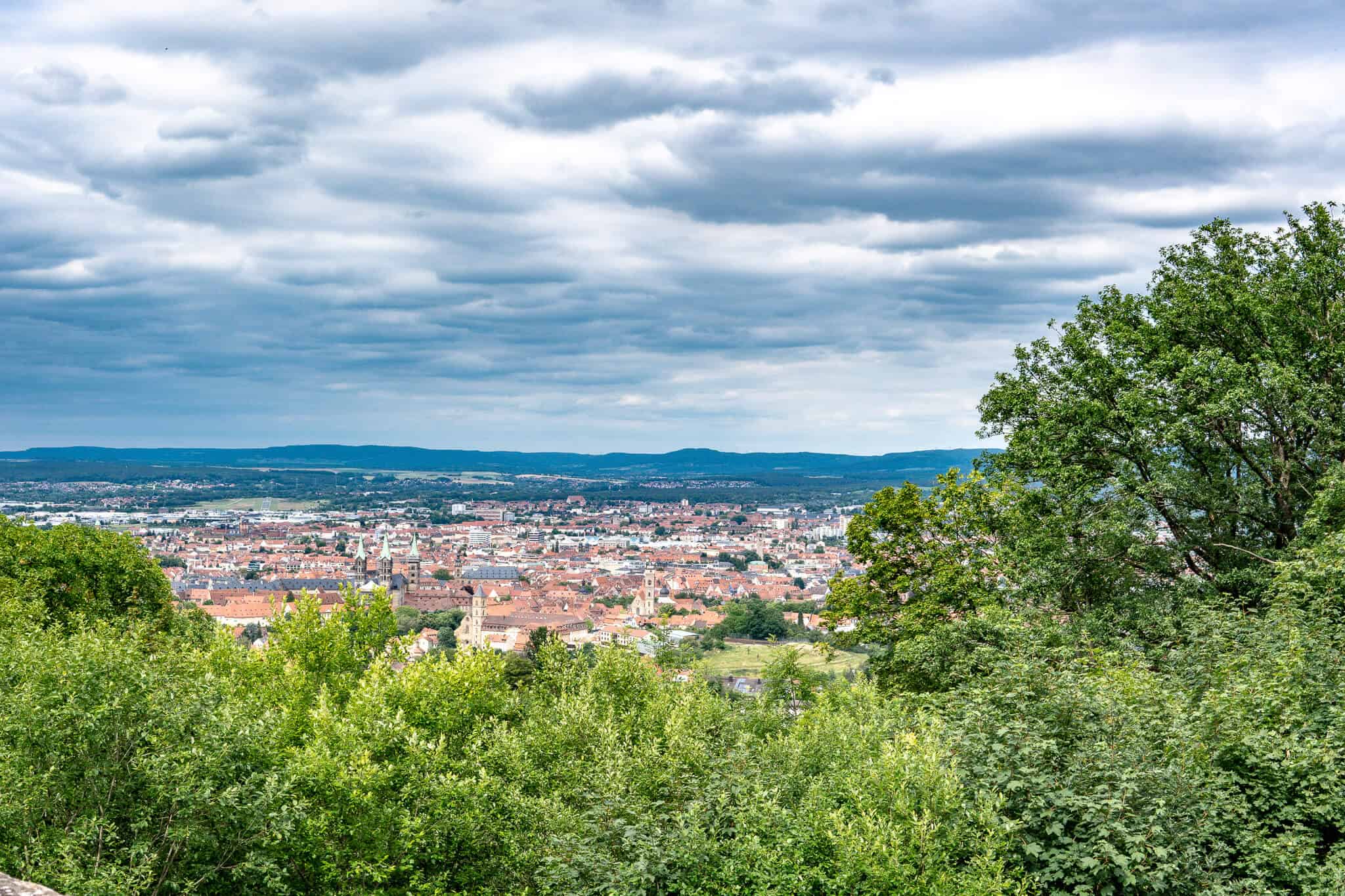 On the Michelsberg or Michaelsberg is the monastery of the same name. Today it is a home for the elderly, but it is still worth a visit. First of all, there is a gorgeously arranged garden through which you can stroll. Or you can simply sit down in the café next door and treat yourself to a piece of cake and coffee. 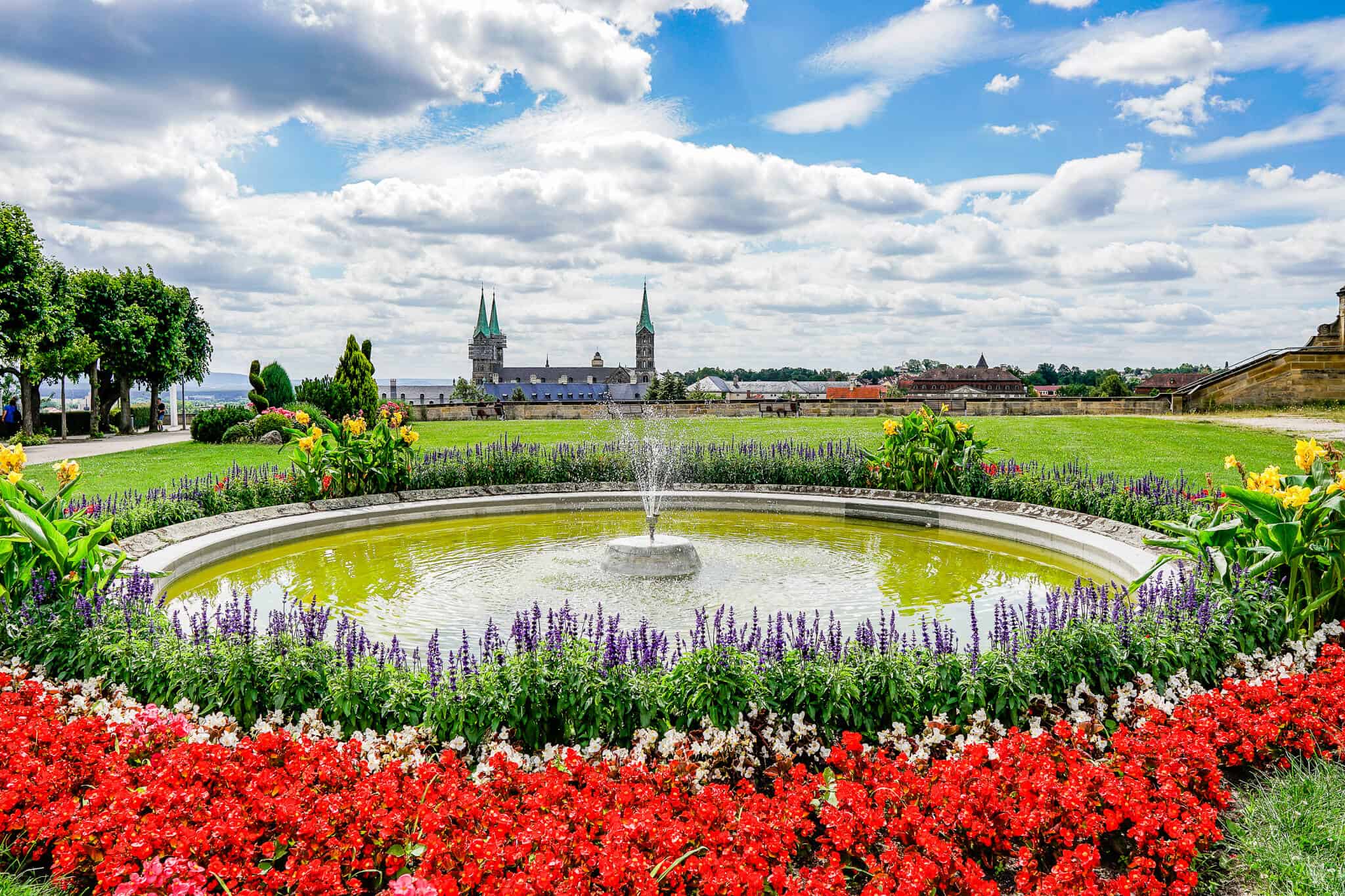 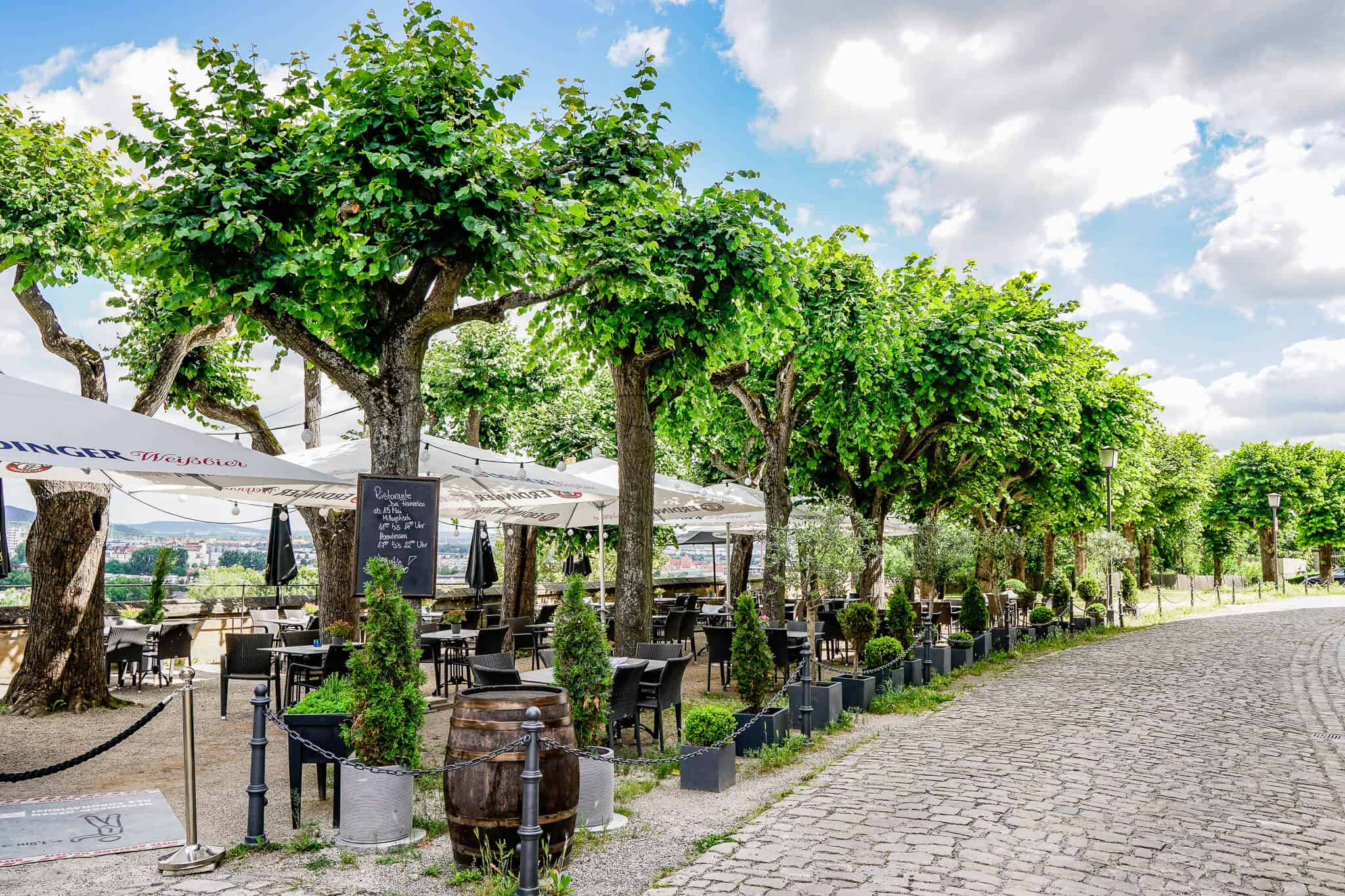 A viewing platform offers probably the most beautiful view of Bamberg for me. 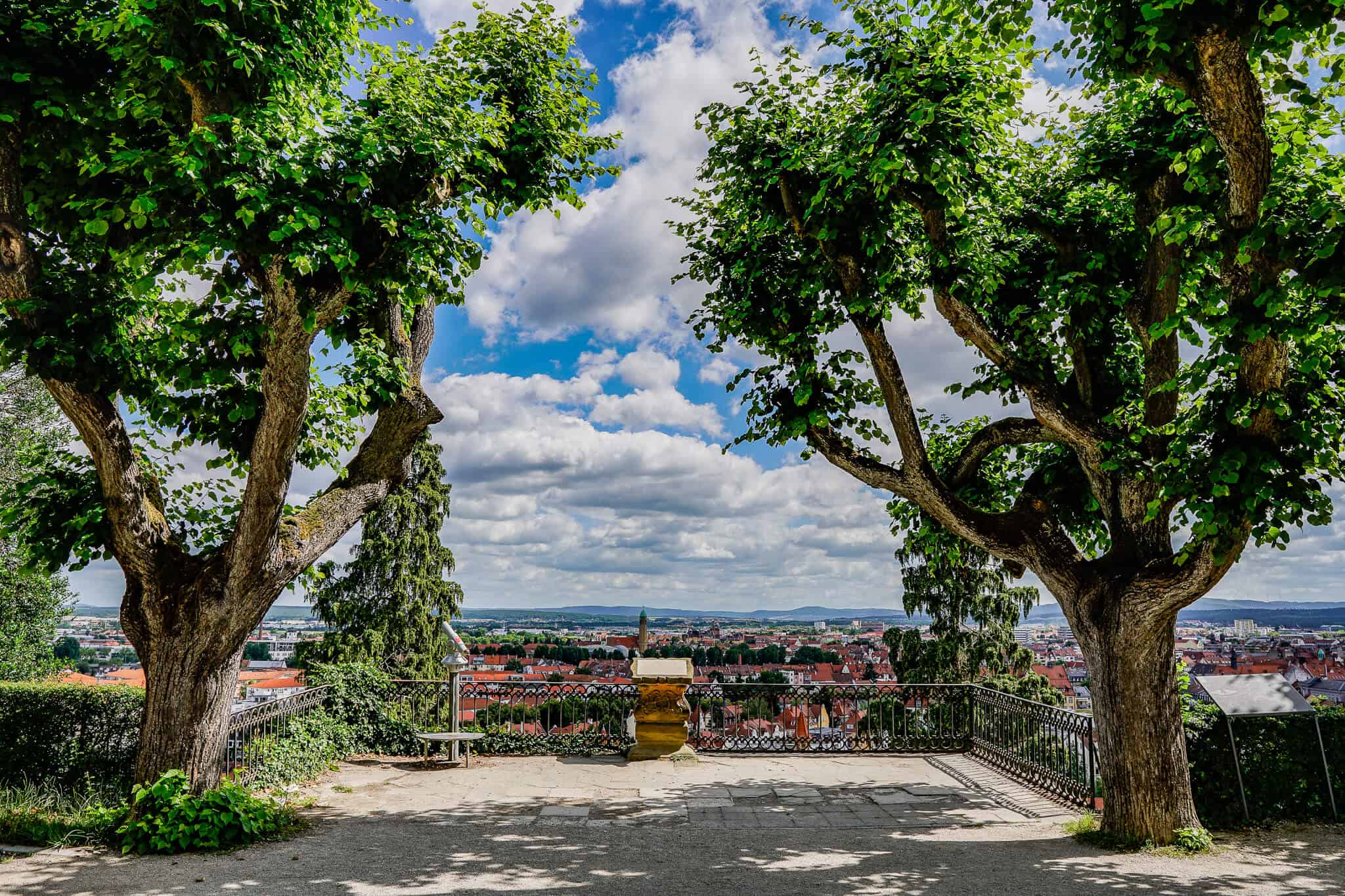 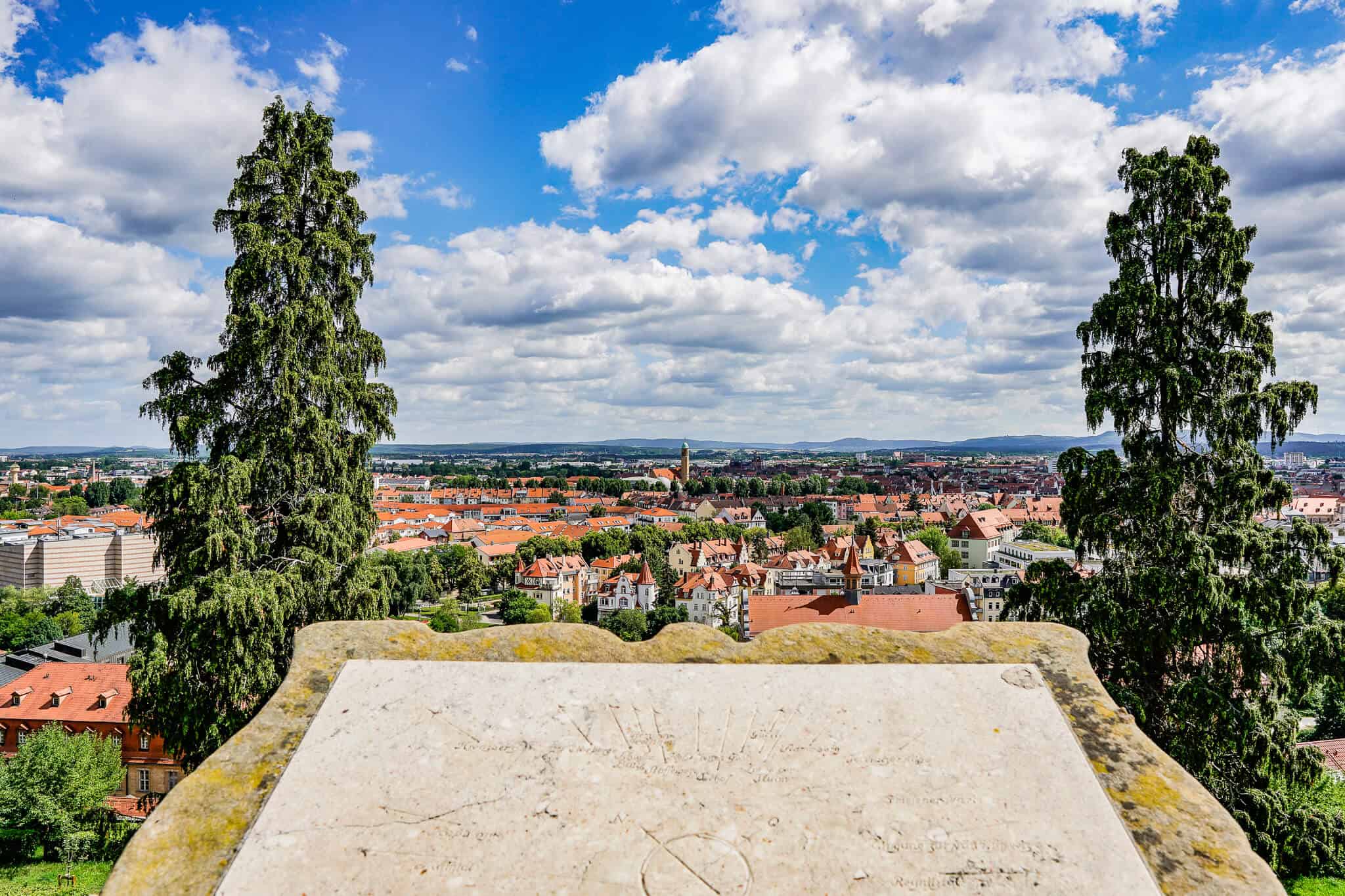 And secondly, the church also belongs to the things to do in Bamberg. However, it is currently being renovated and is therefore not open. If you would like to see it, please ask in advance when it will open again.

Right next to the monastery is the terraced vineyard of the Michelsberg. If you still have enough energy, you can also walk along this path. 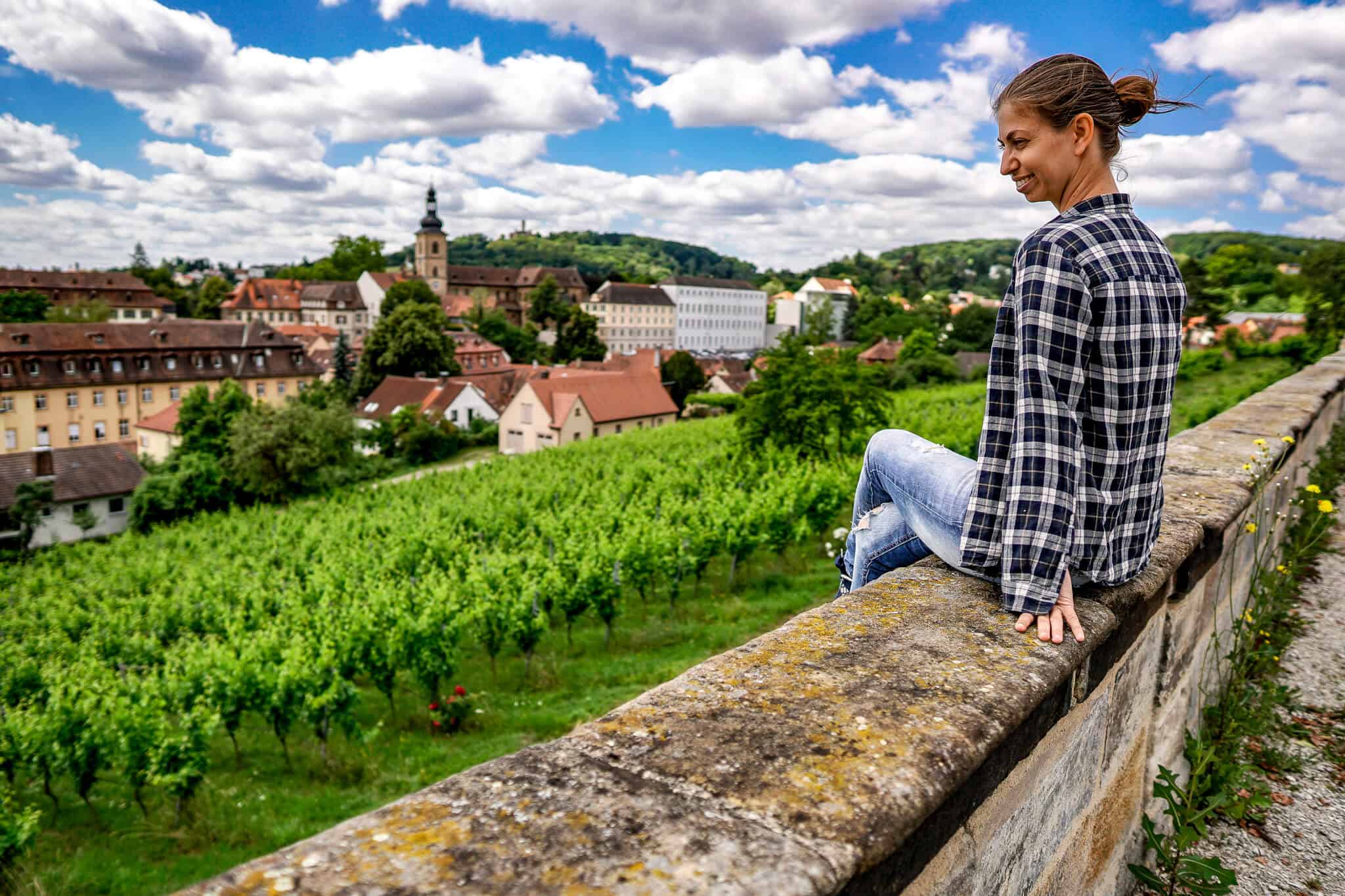 Stairs lead directly from the monastery to the old town and to the other things to do in Bamberg. You also have a nice view from the path directly below the stairs. 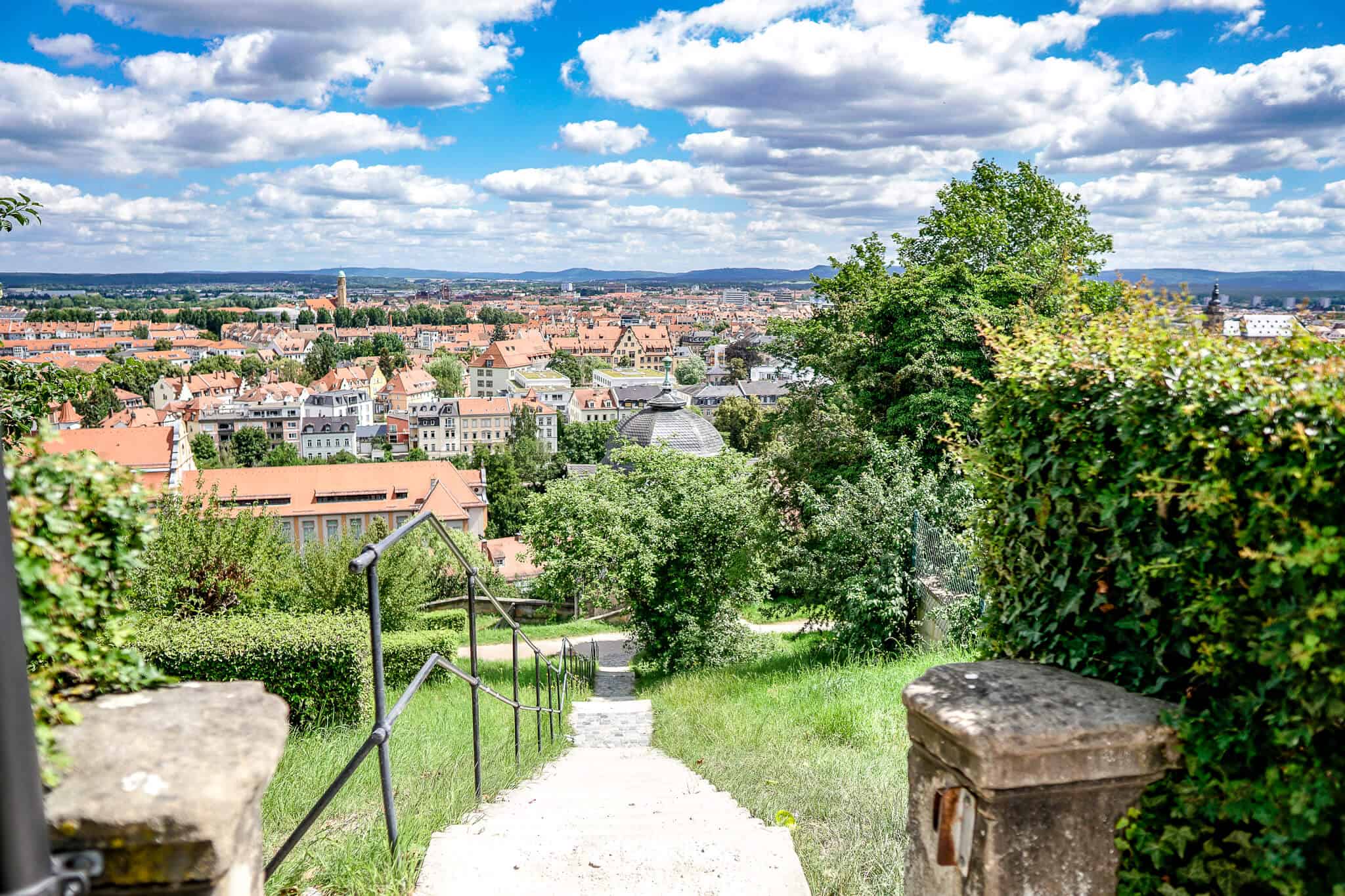 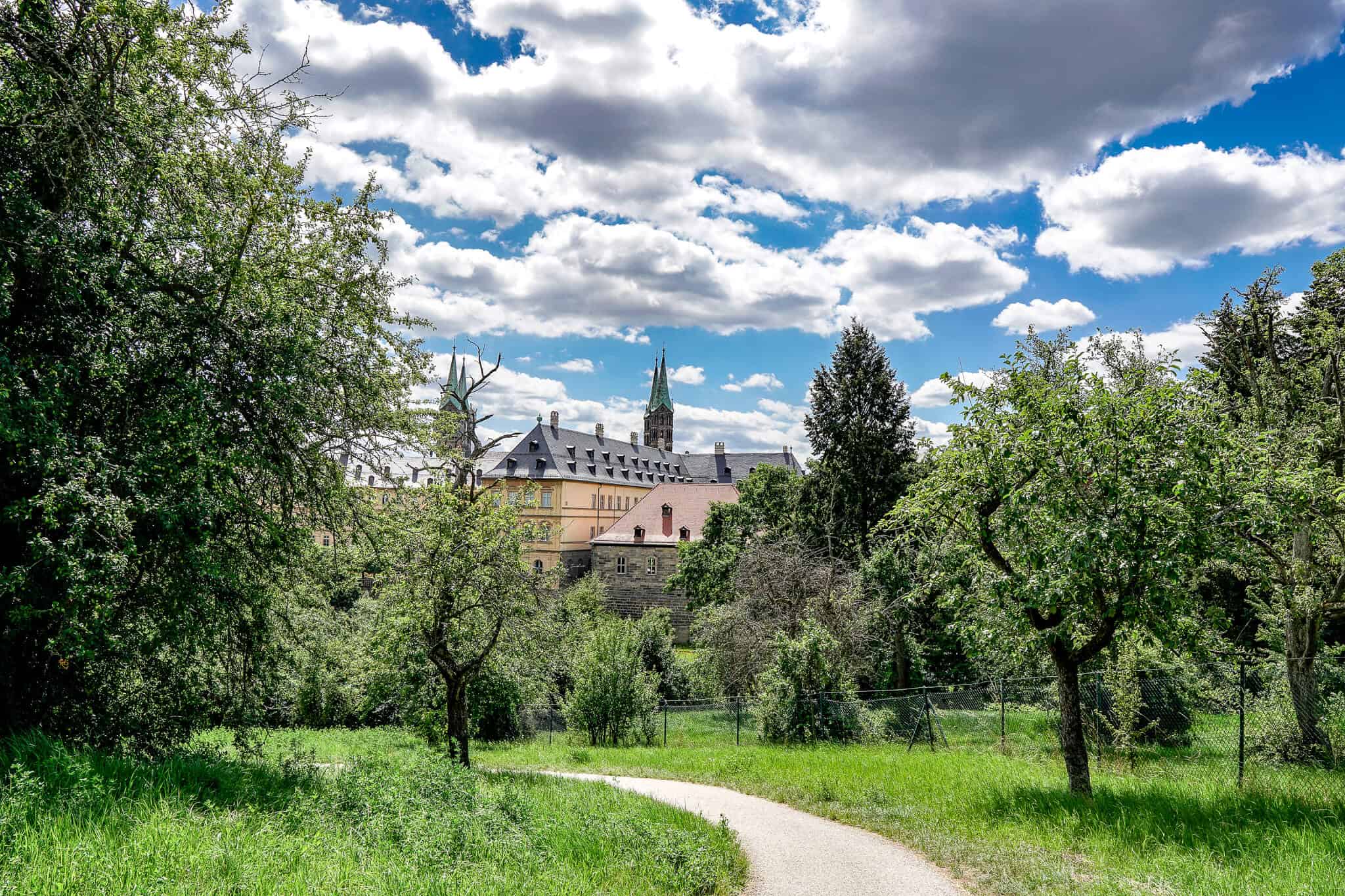 6-Hill Zour With the Bamberger Bahn

If you don’t want to explore the things to do in Bamberg by foot and also want to get some background information, I can highly recommend the 6-hill tour with the Bamberg bus. I did it myself and found it practical and amusing. You can pay directly in the bus and learn all kinds of interesting things about the World Heritage Site. 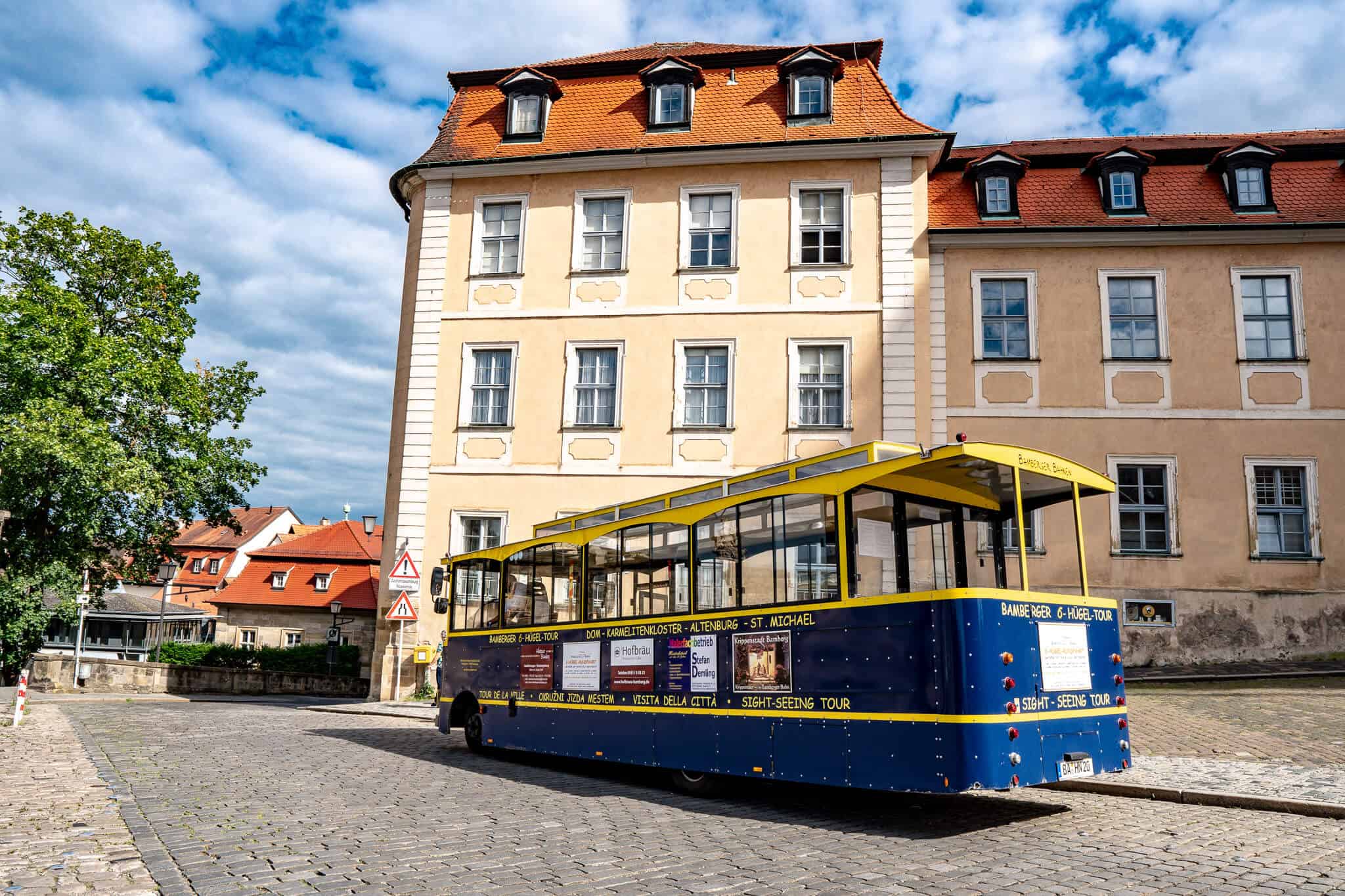 You want to stay longer than just one day? Check out Tripadvisor*, Airbnb* or Hostelworld*! There is something for every budget. Since I didn’t spend the night there myself, I can’t recommend anything.

On my tours, I am mainly on the road with clothes and equipment from Decathlon. My hiking boots for example are waterproof half-height hiking boots. In general, if you are a regular hiker or outdoor enthusiast, I recommend that you buy some appropriate clothing and shoes. In the worst case, normal sneakers will do, as long as they give you a good grip and you can handle them if they get dirty. On hikes like the one in the Margarethen Gorge, this can happen faster than you can look. On the day trip to Bamberg, I was wearing these sneakers from Decathlon: 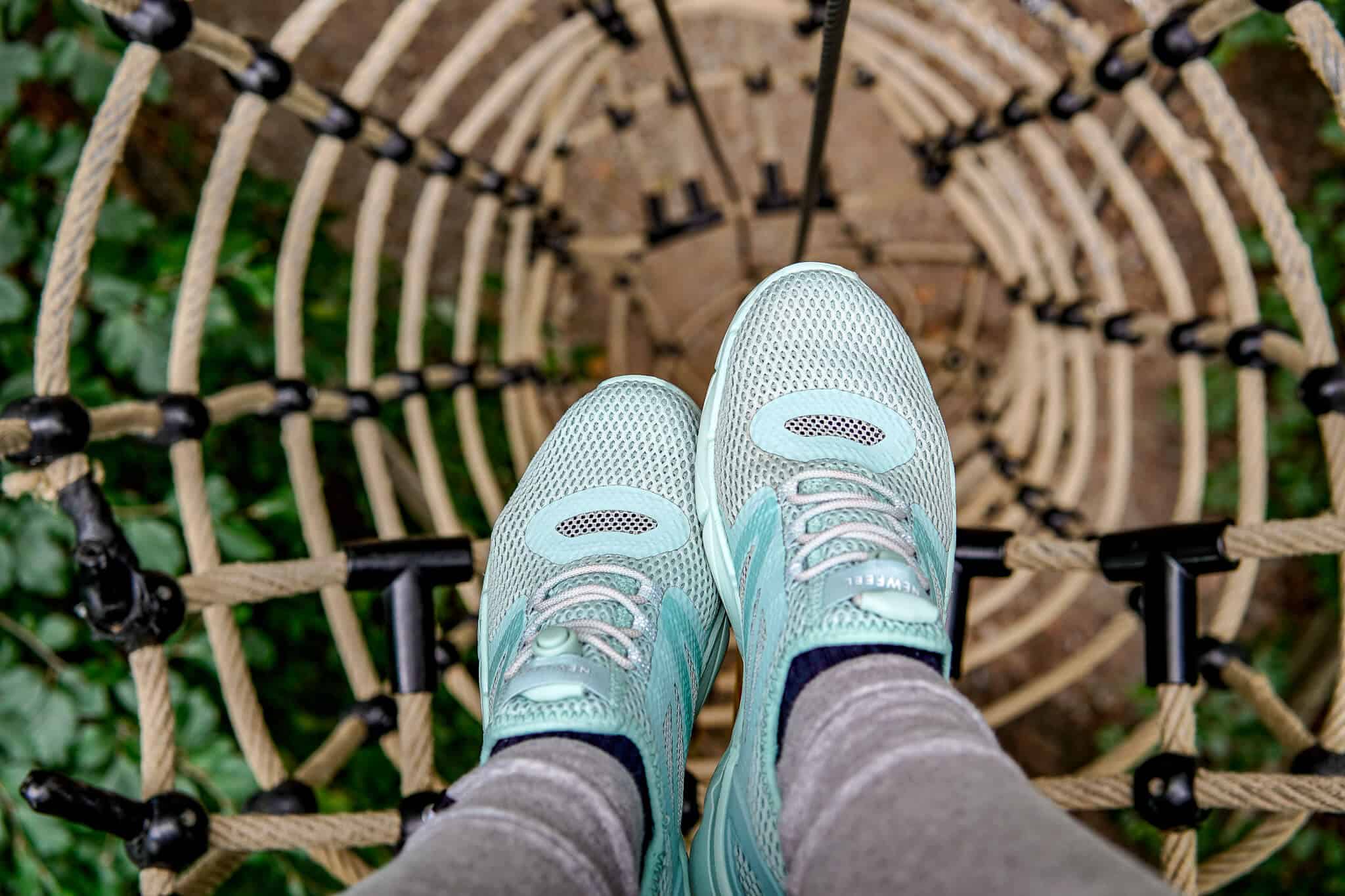 I would also recommend protection for your phone. I got a nice scratch when I was hiking in Margaret Gorge. And that’s even though my phone didn’t fall off or bump into anything. At least not consciously. Therefore, I have now an outdoor case.

By the way, I take my pictures with a Sony Alpha 6500*. I usually switch between my two favorite lenses: a 10-18mm wide-angle lens* and a 30mm fixed focal length*. In case you’ve ever wondered how I take pictures of myself even though I’m often on the road alone: I have a Rollei tripod*.

Final Thoughts About Things to do in Bamberg

Bamberg actually has far too much to offer to “check it off” in a single day. But if you don’t have more time or just feel like a day trip I can still recommend Bamberg. In a short time you can see the most important sights in Bamberg and get a good impression of the city in Upper Franconia.

I enjoyed my day in Bamberg and the trip was definitely worth it.

PS: All links with an asterisk (*) are affiliate links!

HIKING IN THE ODENWALD