The Staufen in the Taunus – A Hike, a Castle Site, And an Oath

The Staufen in the Taunus has always been familiar to me. Sure: It is only about an hour walk from the place where I grew up. But as is so often the case, I have explored many destinations around the world. Only my home country I never knew very well. But in these difficult times, I learn to appreciate what is right in front of my doorstep. And so I started to get to know the region. My first trip was to the Staufen. I didn’t even realize what a legendary place it is.

How to Get There

For the hike on the Staufen in the Taunus, you have to travel to my home village Kelkheim and there to the Waldgasthof Gundelhard. This is the starting point for the hike. The best way to get there is as follows::

When you stand in front of the Gundelhard and look at the house, take the path to your right, so that you have the field on the left and the forest on the right. There are usually lots of people enjoying nature, especially on weekends. Because the inn is a bit like a junction: From here hiking routes lead in all directions and to several great places. The Staufen in the Taunus is one of them. But from here you can also go to the so-called Kaisertempel, the Bahá’ì Temple or the Meisterturm. 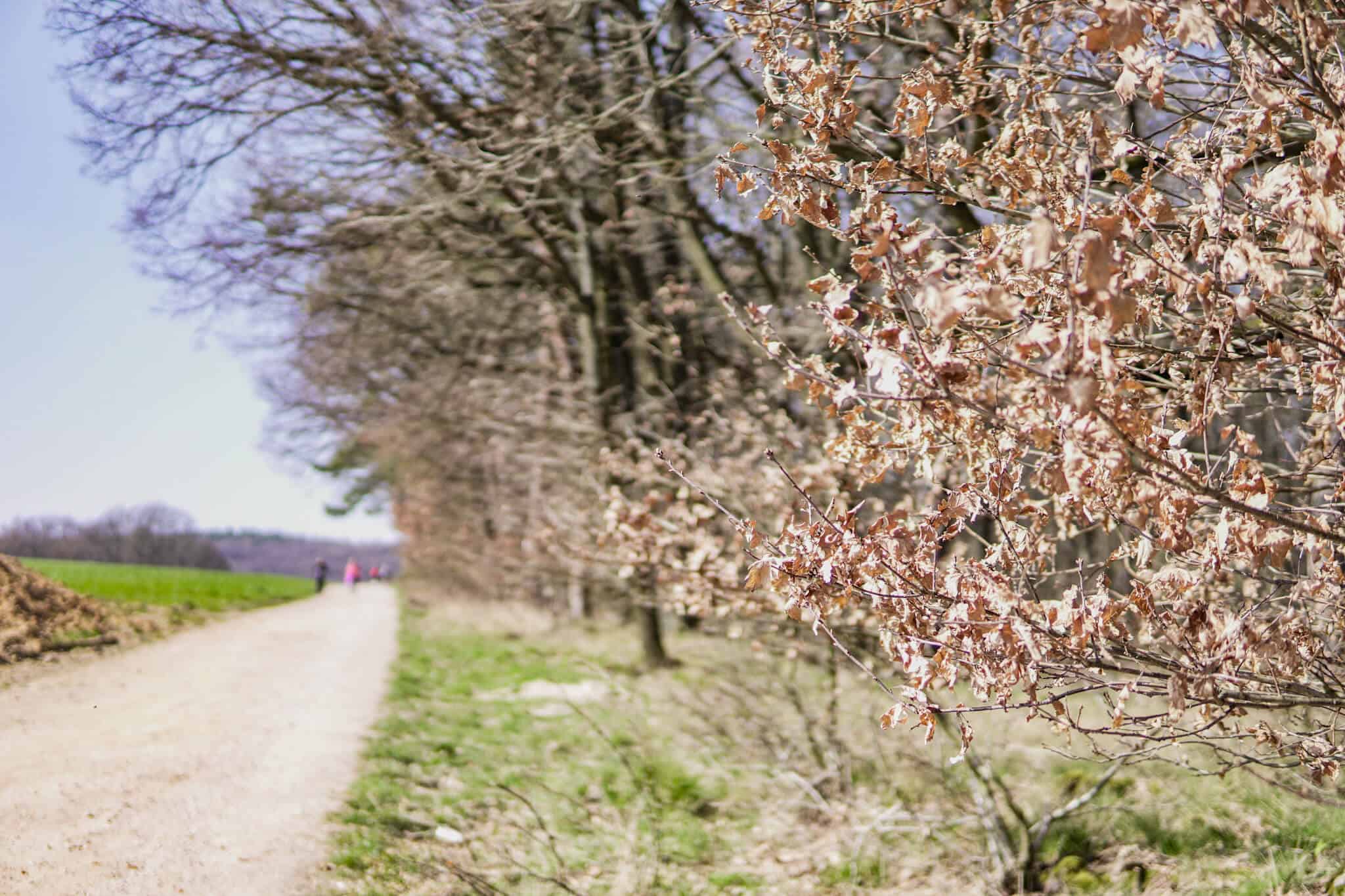 Just keep walking straight until the road makes a 90-degree turn to the left. There you follow the path into the forest. Unfortunately, the Staufen is not signposted. Either ask your way through or keep Google Maps open. This is not ideal because not all hiking trails are marked. But this way you can roughly guess where you have to go when you get to a crossroads. Although there are not many crossroads anyways. Just keep left after entering the forest, walk up the mountain and turn right at a large intersection with a picnic table (last photo below). From there you go straight again until you reach the view point. 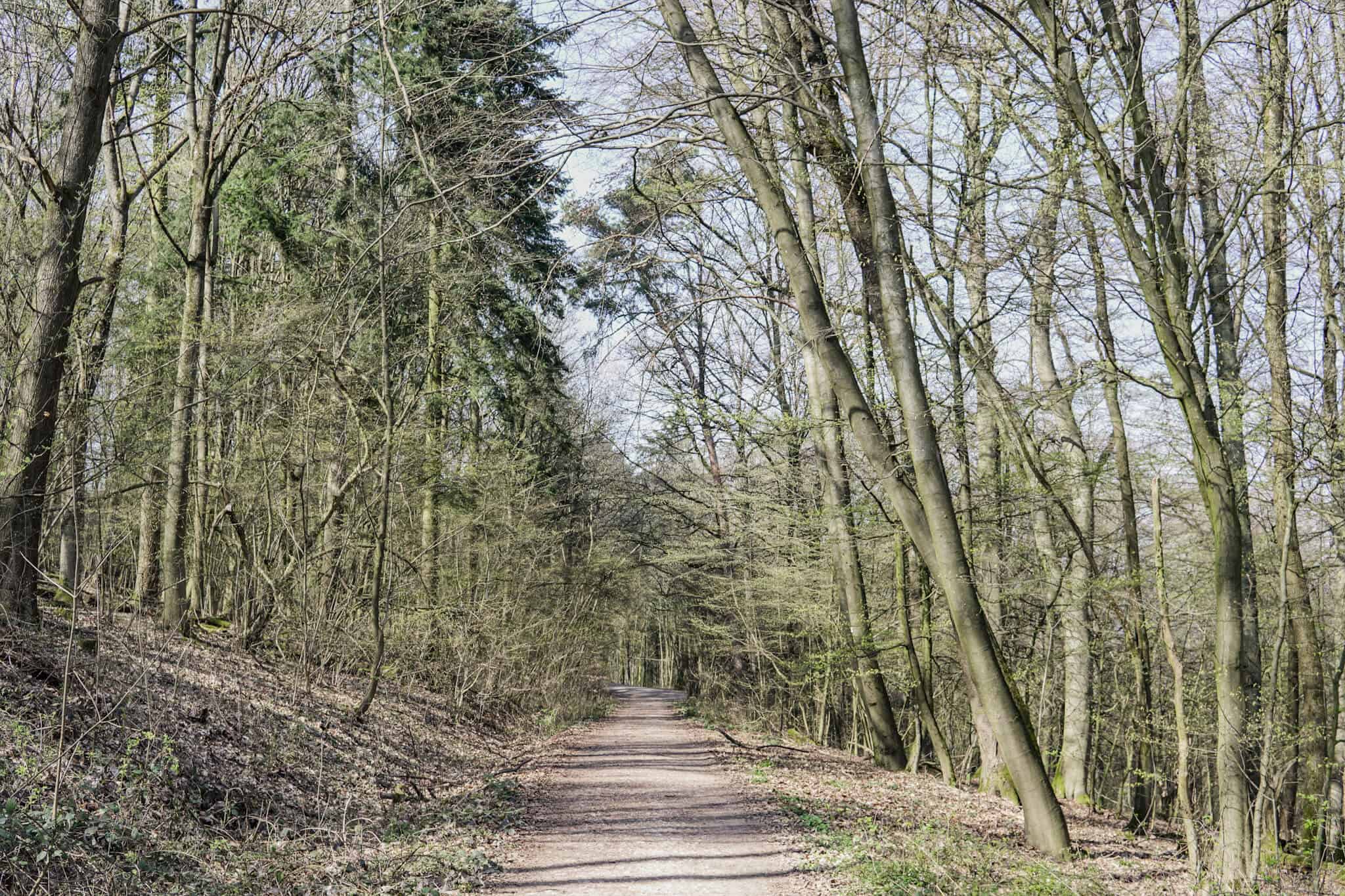 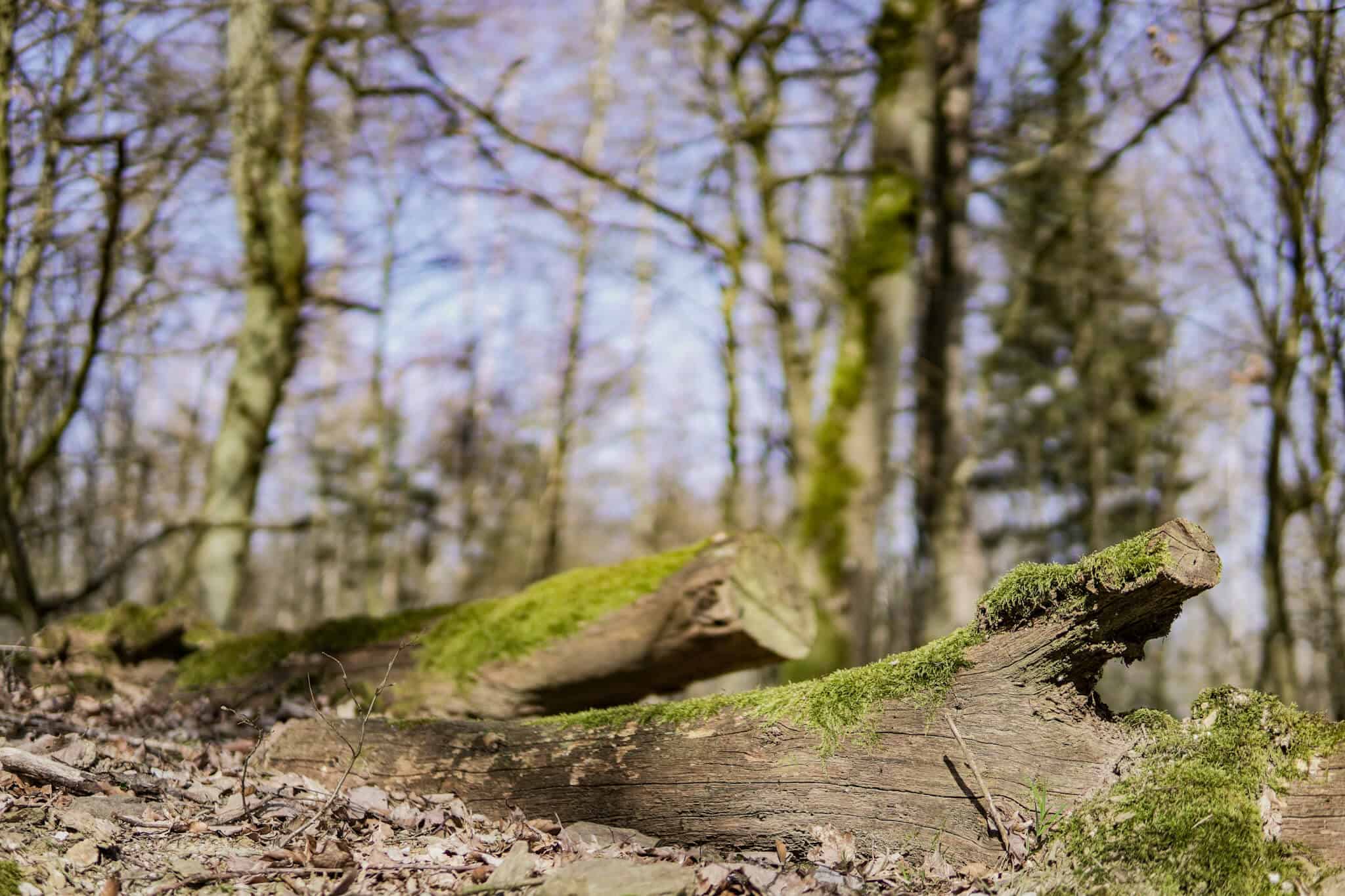 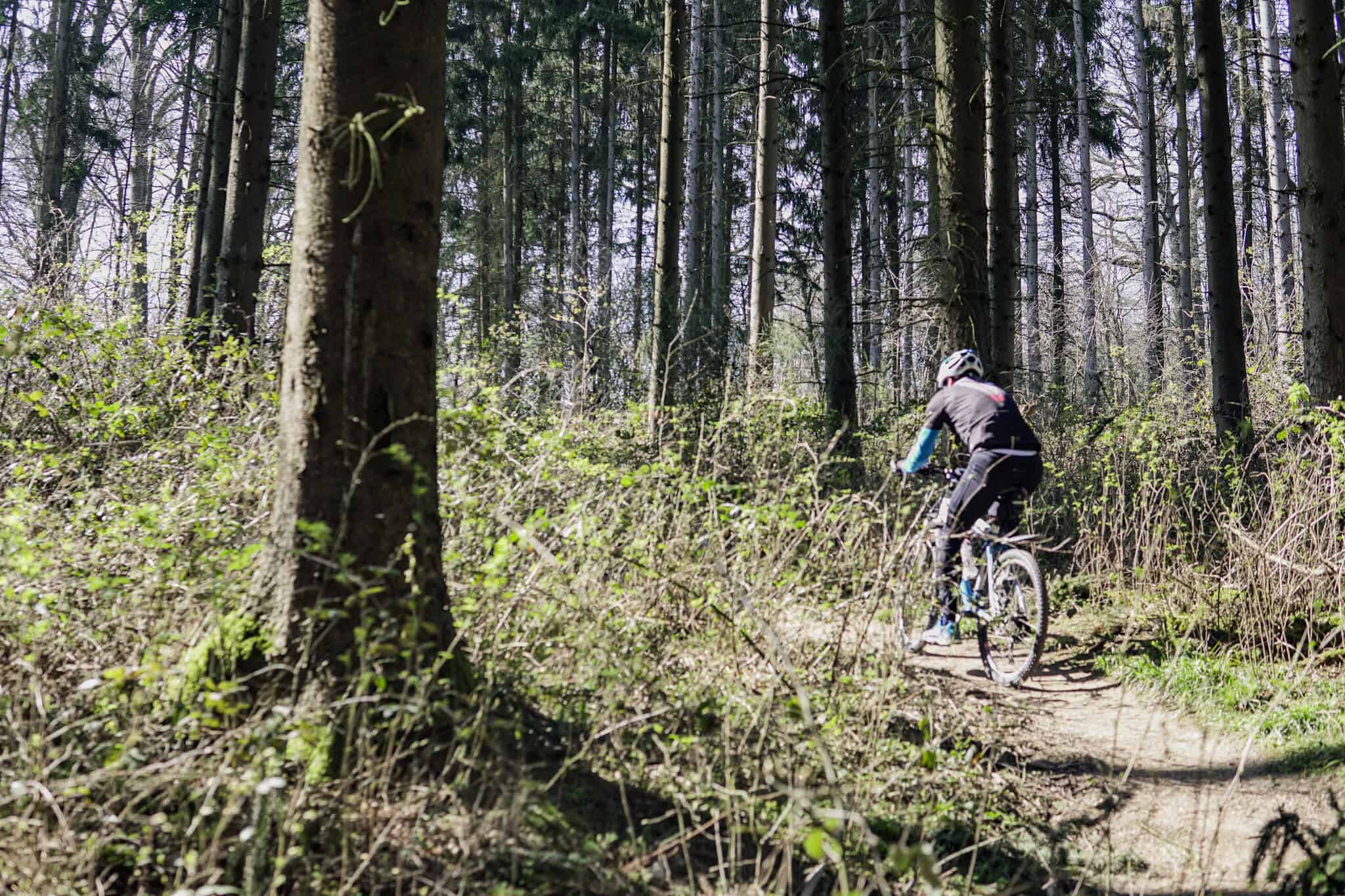 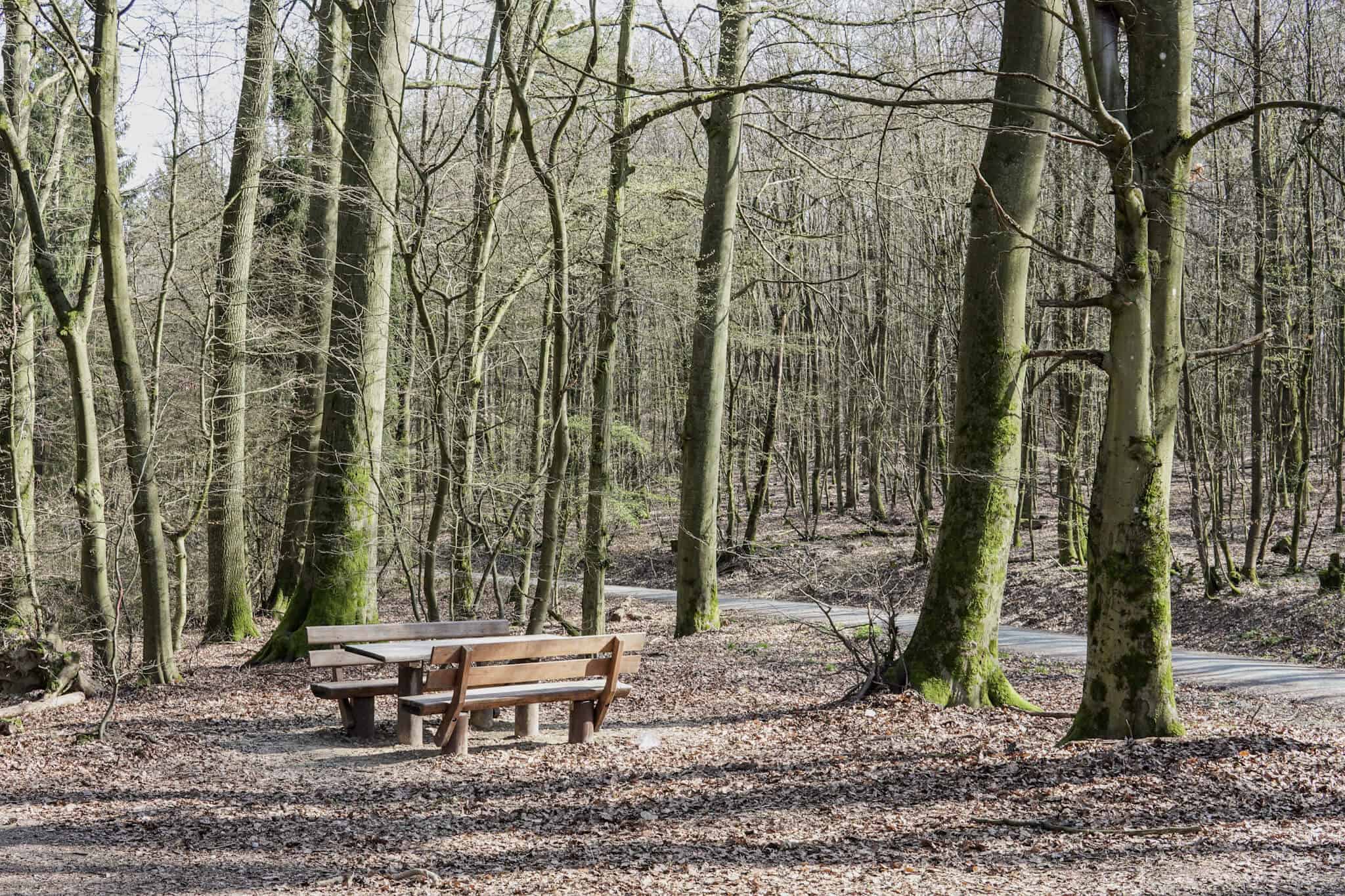 If you are walking at a leisurely pace and making photo stops to capture the beauty of nature, you should still not need more than an hour. It is only 2.7 kilometers from the Gundelhard to the Staufen. 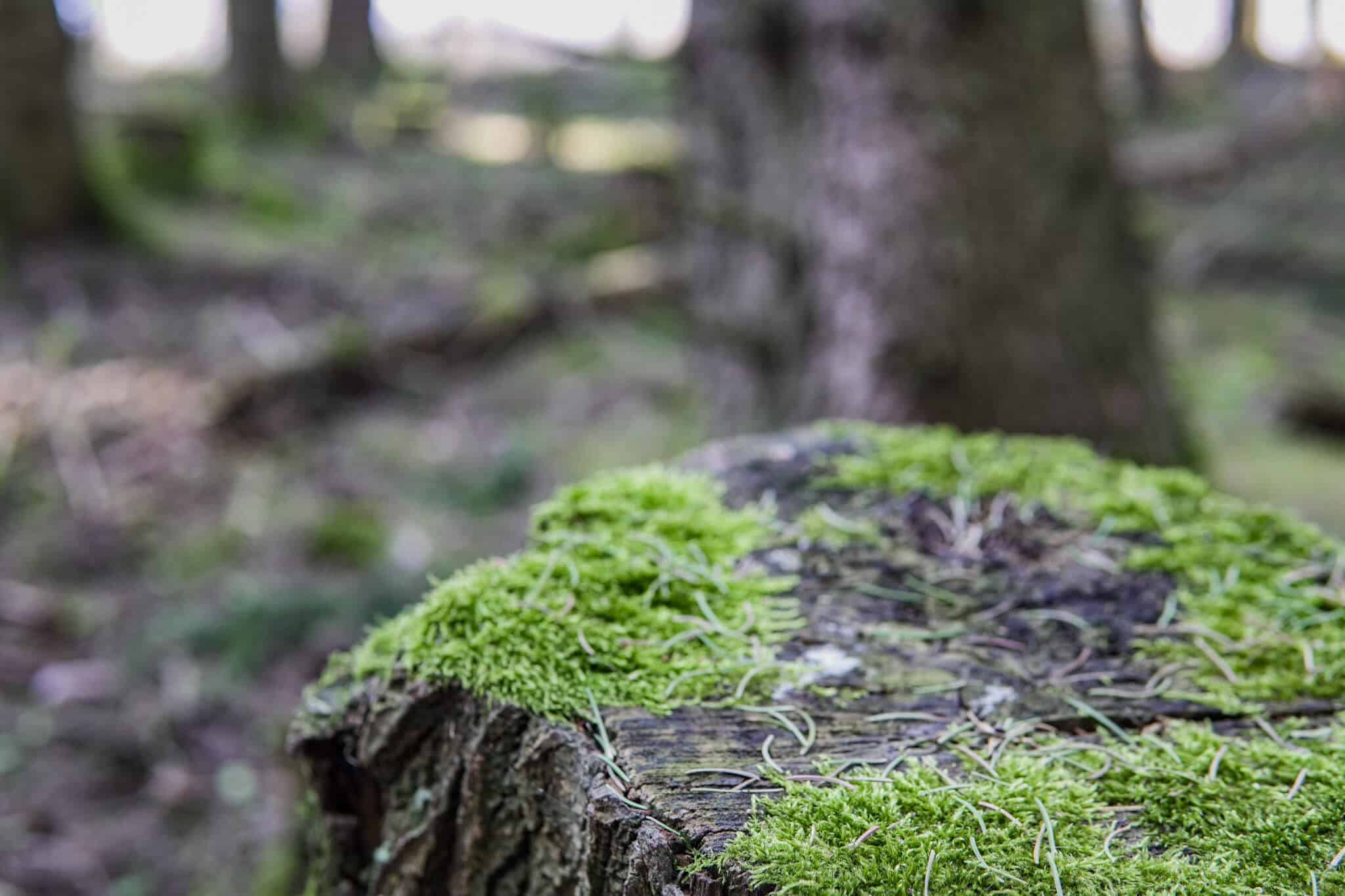 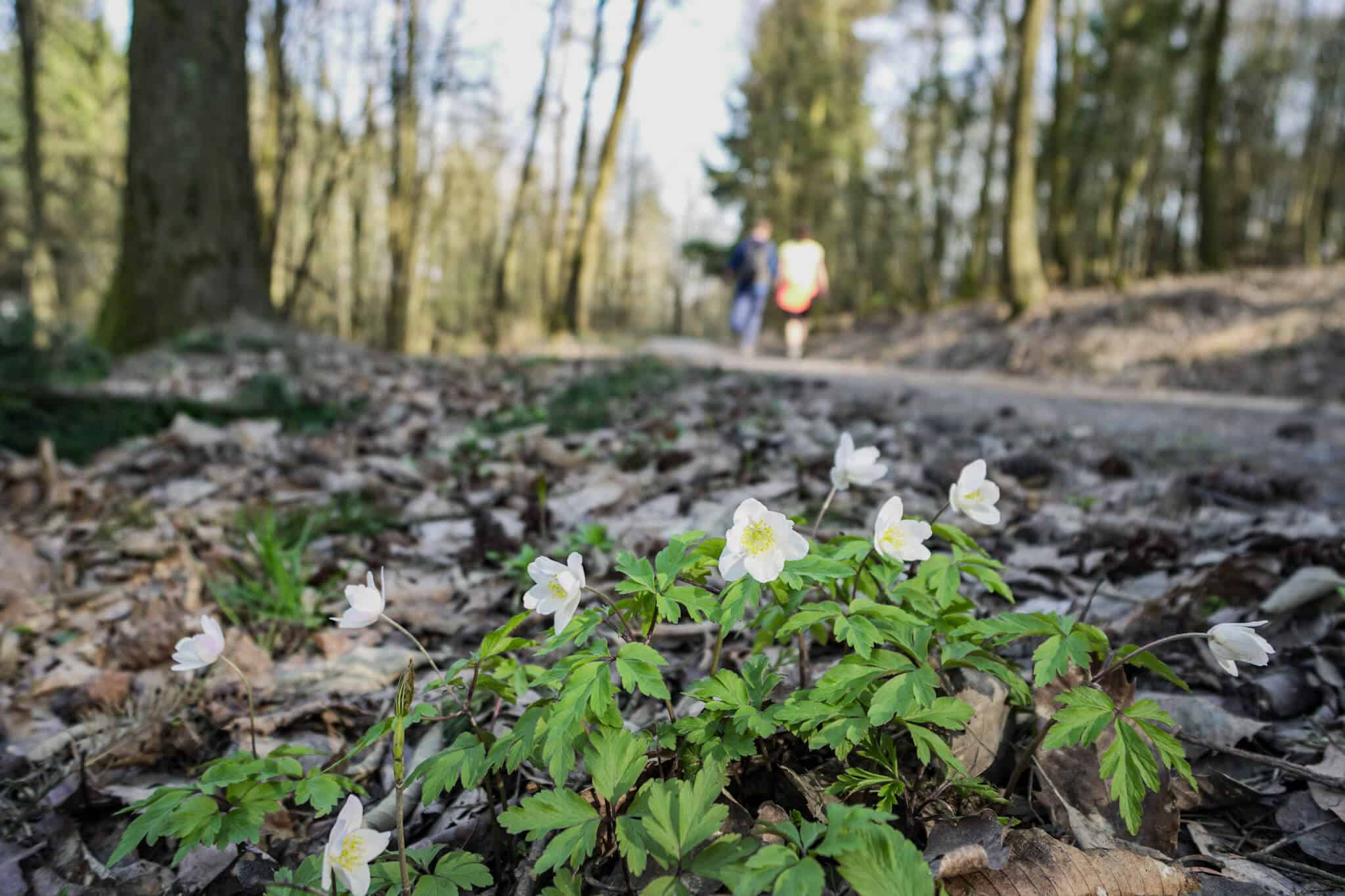 You can tell that you have arrived by the fact that there are probably a few hikers and cyclists enjoying the view. They are probably sitting on the group of rocks to your right, the so-called Großer Mannstein. 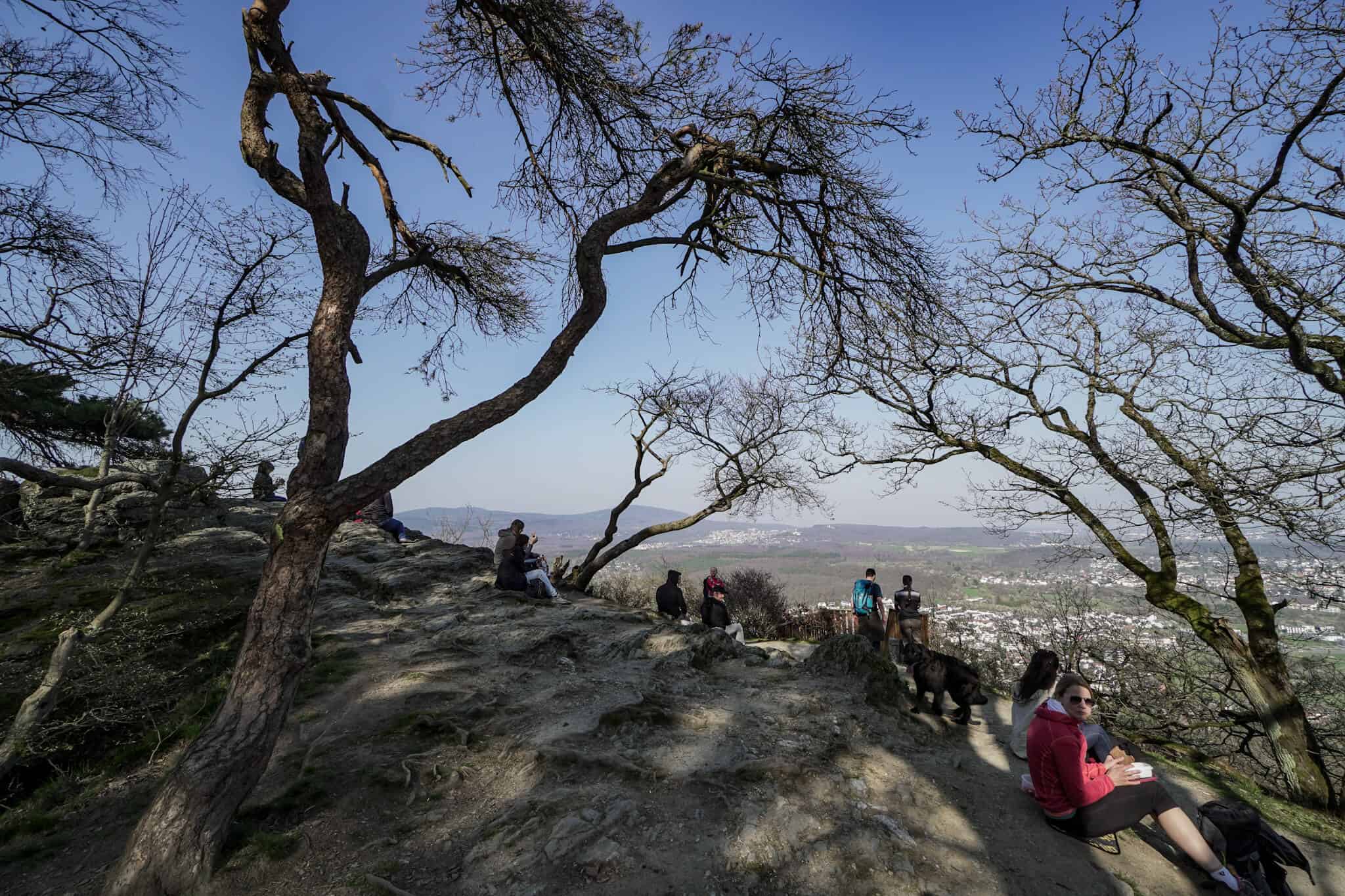 The Staufen in the Taunus

Now you are almost 450 meters above sea level. The summit itself is densely forested and not very exciting. From the Großer Mannstein, on the other hand, you have a fantastic view, which on clear days allows you to see as far as the Odenwald. According to the legend, it was created when a knight was petrified by a mountain giant. 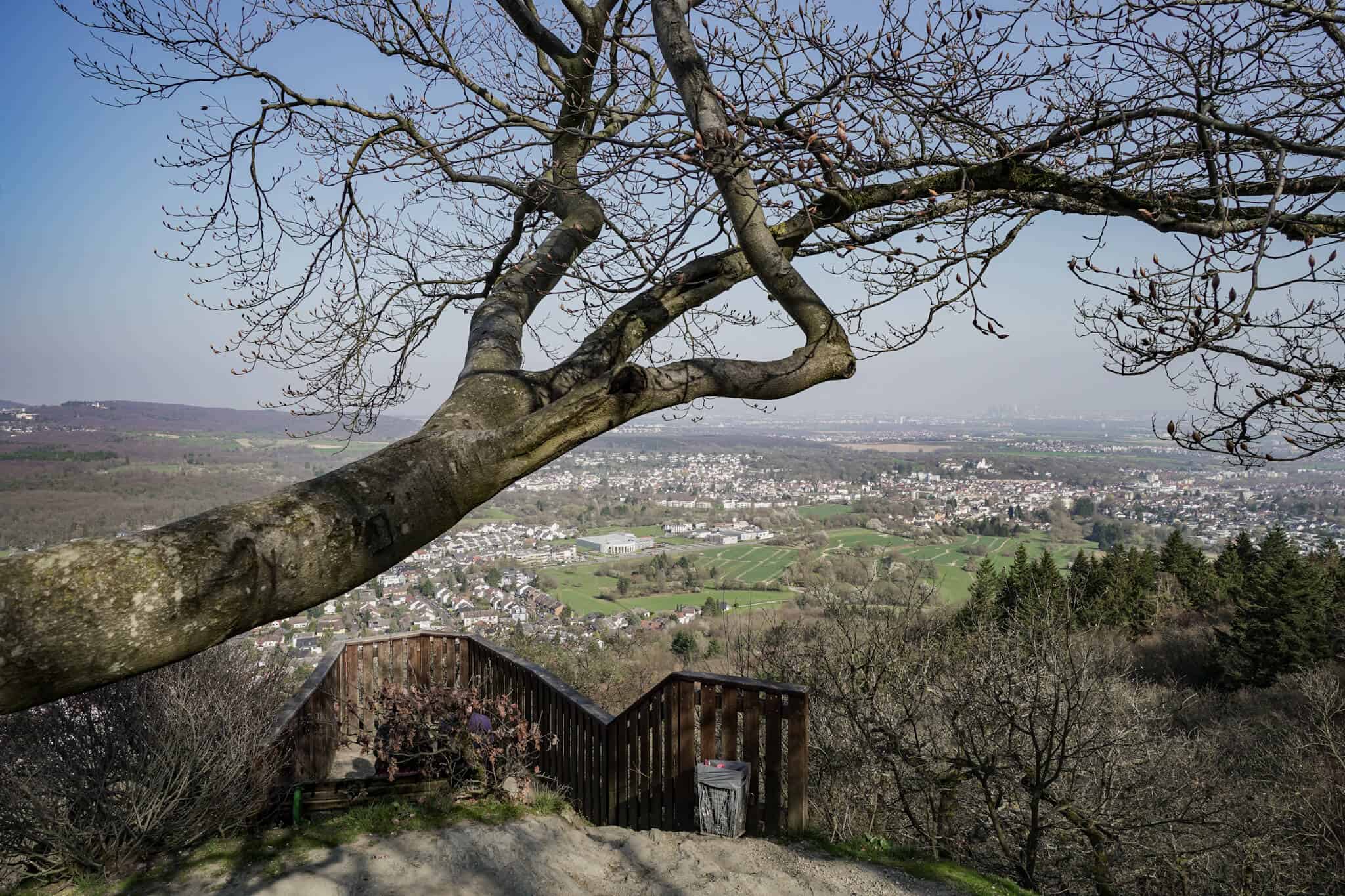 Unfortunately, it wasn’t a very clear day when I was up there. But nevertheless, I don’t want to withhold a close-up of Frankfurt’s skyline and my home town Kelkheim from you: 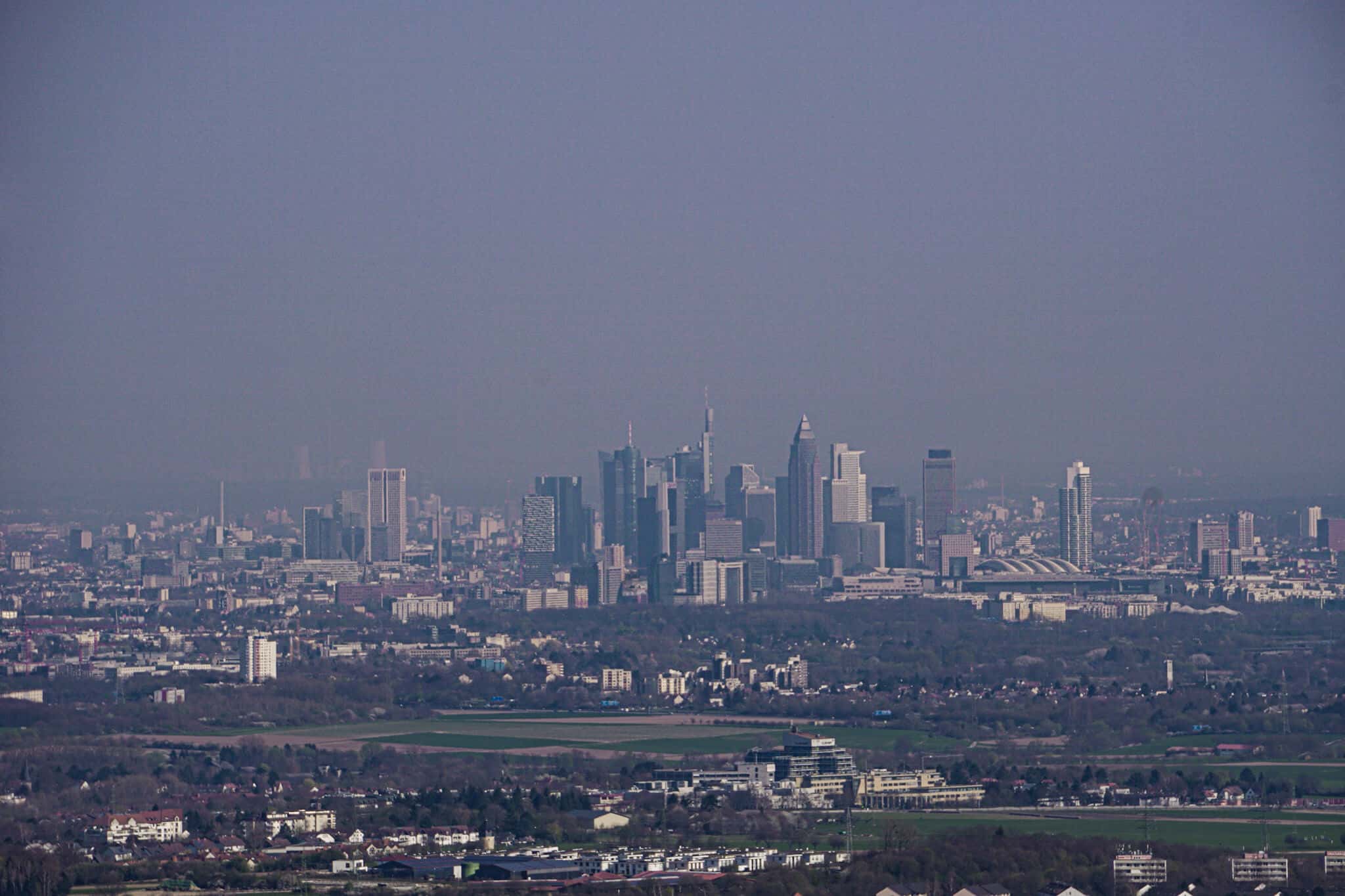 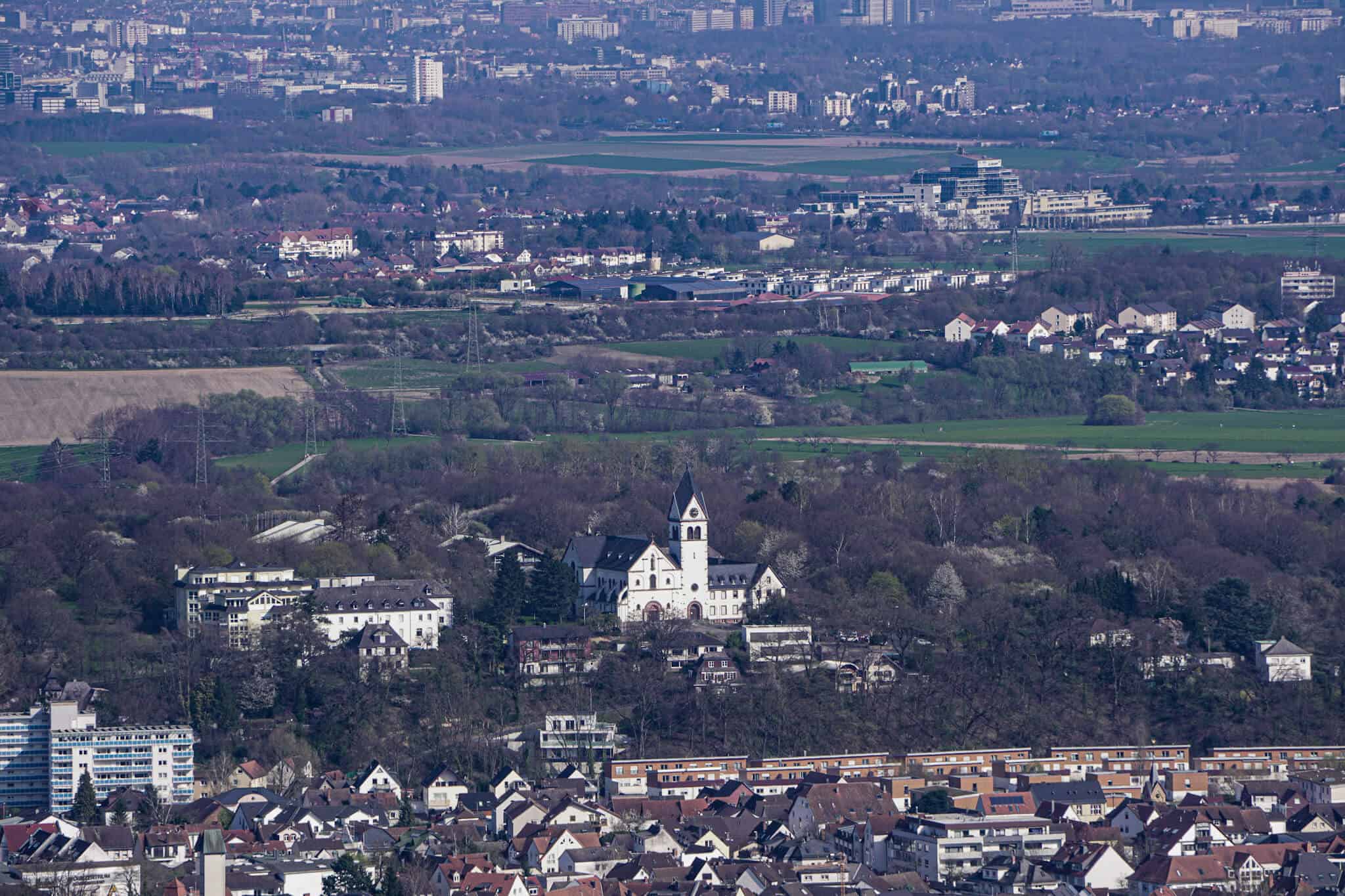 The Tale of the Großer Mannstein

The origin of such a place is often shrouded in legends. This is also the case of the Großer Mannstein, which tells us the story of Kelkheim’s Romeo and Juliet.

Legend has it that a noble boy who grew up in Königstein Castle and was knighted in Frankfurt at a young age met a noblewoman. Her father was an enemy of the lord of the castle, so she secretly came to a party in the noble boy’s house. The boy and the girl fell in love with each other and arranged to meet near the lady’s castle.

However, her father had the girl watched by a servant who was also a witch, so the servant quickly understood what was going on and even watched the couple together. When the couple noticed that the servant was lurking in the shadows, they fled to the Staufen. The witch was quicker though and turned first the noble boy and then the young lady into stone.

It is said that the two lovers wake up every 13 years and take a stroll around the Gimbacher Hof. The next day they transform back into the stones.

Unfortunately, not much of the castle has been preserved. At best one can only guess that it has been here and there is so little left that even dating was not possible. However, shards of clay have been found which appear to be Roman Terra Sigillata and thus date from the 1st century BC.

With such a poor state of preservation, one no longer speaks of a ruin but of a castle site. The wall is 9 meters long, 3.5 meters wide and 2.7 meters high.

It is assumed that it was a small rampart that had a wooden tower to control the road. This road led from the river Main to the ridge of the Taunus. The castle was first mentioned in 1361.

The Oath of The Staufen

But the vantage point is not only beautiful with its view of the Taunus and the Rhine-Main plain, and looks back on two millennia of history. A truly memorable event also took place at this point: In October 1838, the brothers Friedrich, Heinrich, and Max von Gagern, after whom one of Kelkheim’s primary schools was named, met here to swear loyalty in the fight for German unity. This endeavor is expressed in this verse from a poem by Friedrich von Gagern:

A memorial plate on the Großer Mannstein still commemorates this so-called Oath of the Staufen today. 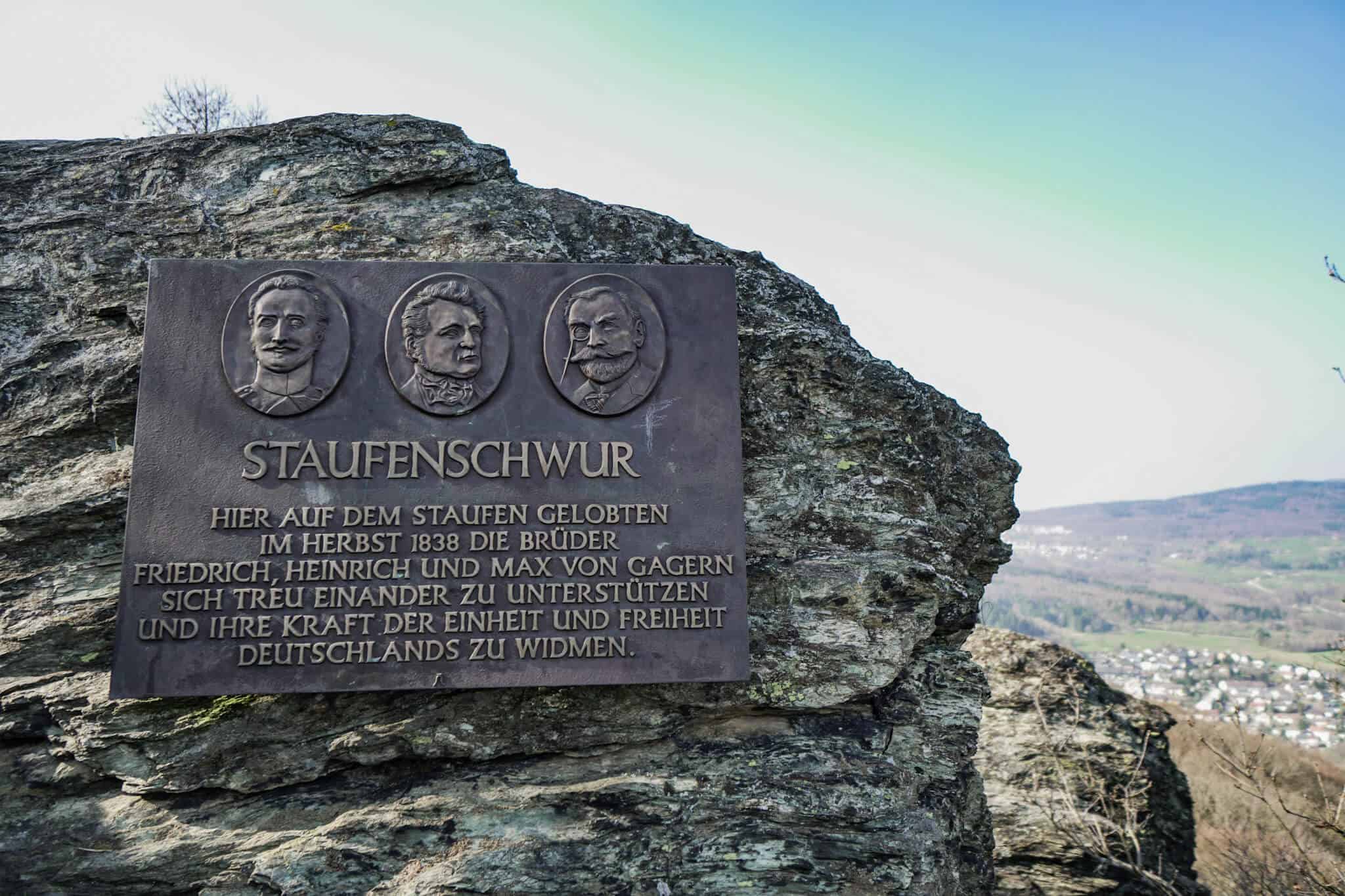 Heinrich von Gagern became president of the Frankfurt National Assembly, the first parliament of the then emerging German Reich, ten years after the Staufen Oath.

The brothers are buried on the Kelkheim Hornau cemetery, from where they can look up to the Großer Mannstein. This way they are reminded of their oath even in death.

The Oak of Schiller And The Memorial Stone

Near the rampart is also the so-called Oak of Schiller with a corresponding memorial stone. Baroness Antonie von Reinach had the American red oak planted to commemorate the hundredth anniversary of Friedrich von Schiller’s death. Next to it on a memorial stone, it says “Schiller-Eiche 9. Mai 1805-1905”.

Even though I delayed it for 33 years until I finally took it, a hike on the Staufen in the Taunus and to the Großer Mannstein is an absolute must for Kelkheimers as well as all those who live in the area or travel here and are hiking enthusiasts.

And as soon as the Waldgasthof Gundelhard is open again, you can stop here after your return from the hike, enjoy a cool drink or fill your hungry stomach.