Monreal in the Eifel – Day Trip to the Romantic Eltz Valley

Last week, I was in the Eifel for the first time. Monreal was the destination – a small village with not even 800 inhabitants, which is both beautiful and enchanting. No wonder: Time seems to have stopped here a few hundred years ago. The old half-timbered houses look like something out of a picture book and not just one, but two castle ruins are enthroned on their hills above the village. I have rarely seen such an idyll. That is why I immediately said yes, when my friend Jan (@jan_wehnert on Instagram) asked me to join him on a photo tour. Our photo buddy Sven (@sky.pix2016 on Instagram) came also with us.

How to Get to Monreal

We arrived by car and I was enchanted from the first moment! That was my first impression of Monreal and my first view of the Löwenburg – the castle in the background: 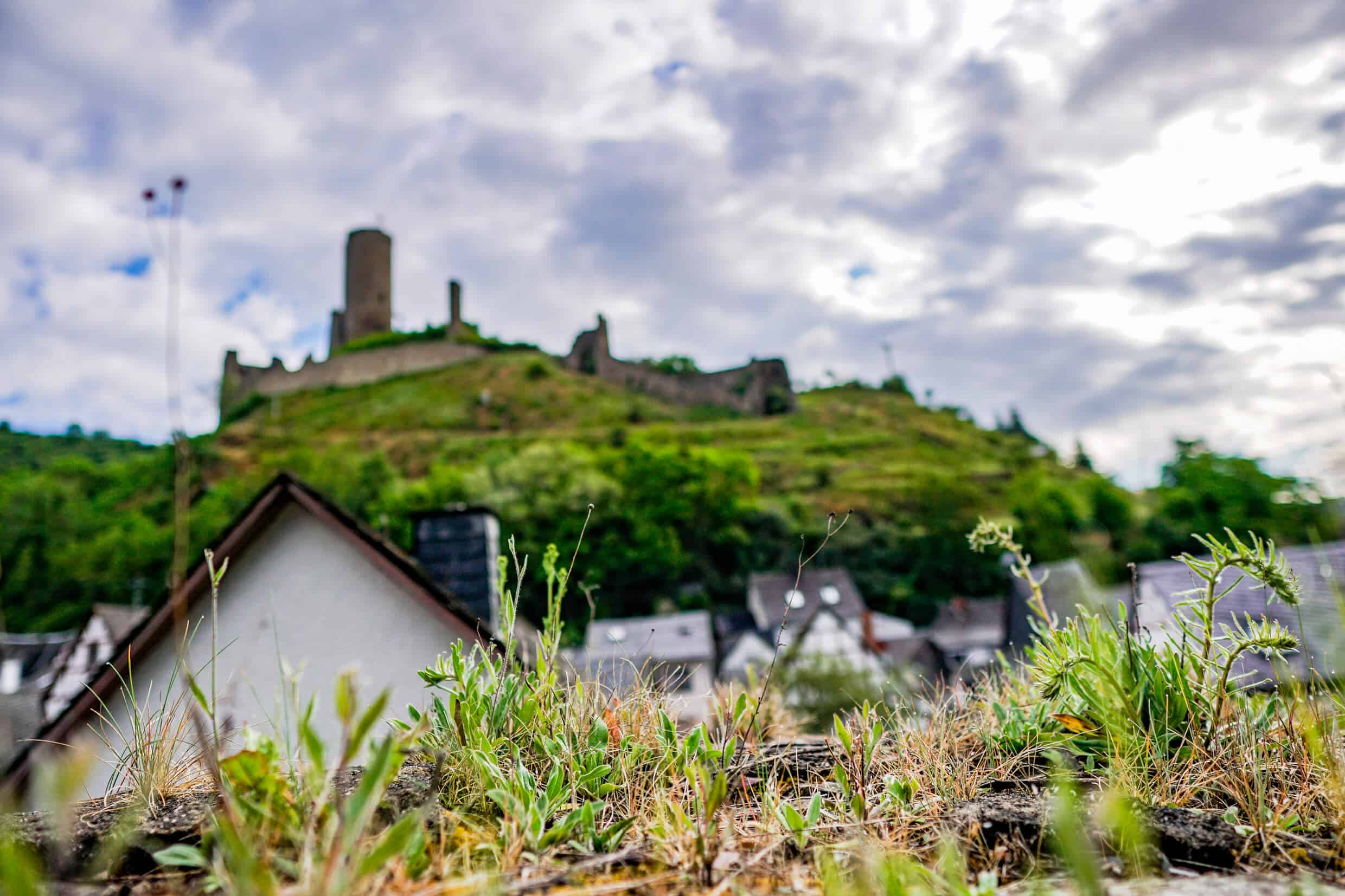 Monreal is located in the beautiful volcanic area Eifel. With not even 1000 inhabitants, one can probably speak of a very small community here. The village lies in the Eltz valley and the Eltzbach flows through it.

If you would like to book a guided tour or receive information, you can do so on the Homepage of Monreal. Otherwise, you can simply roam the cute alleys on your own and wander to the two castles that tower above the city. 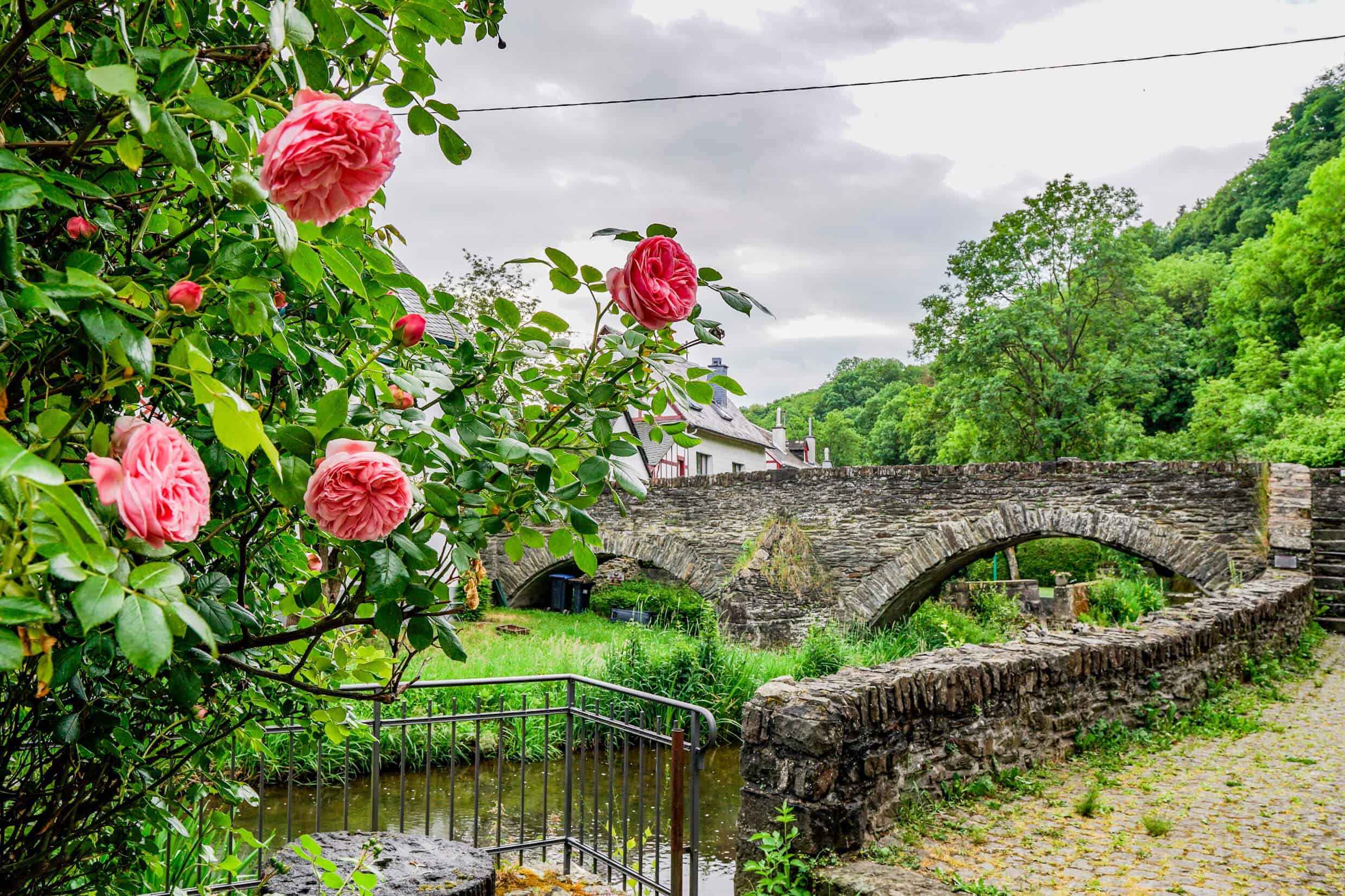 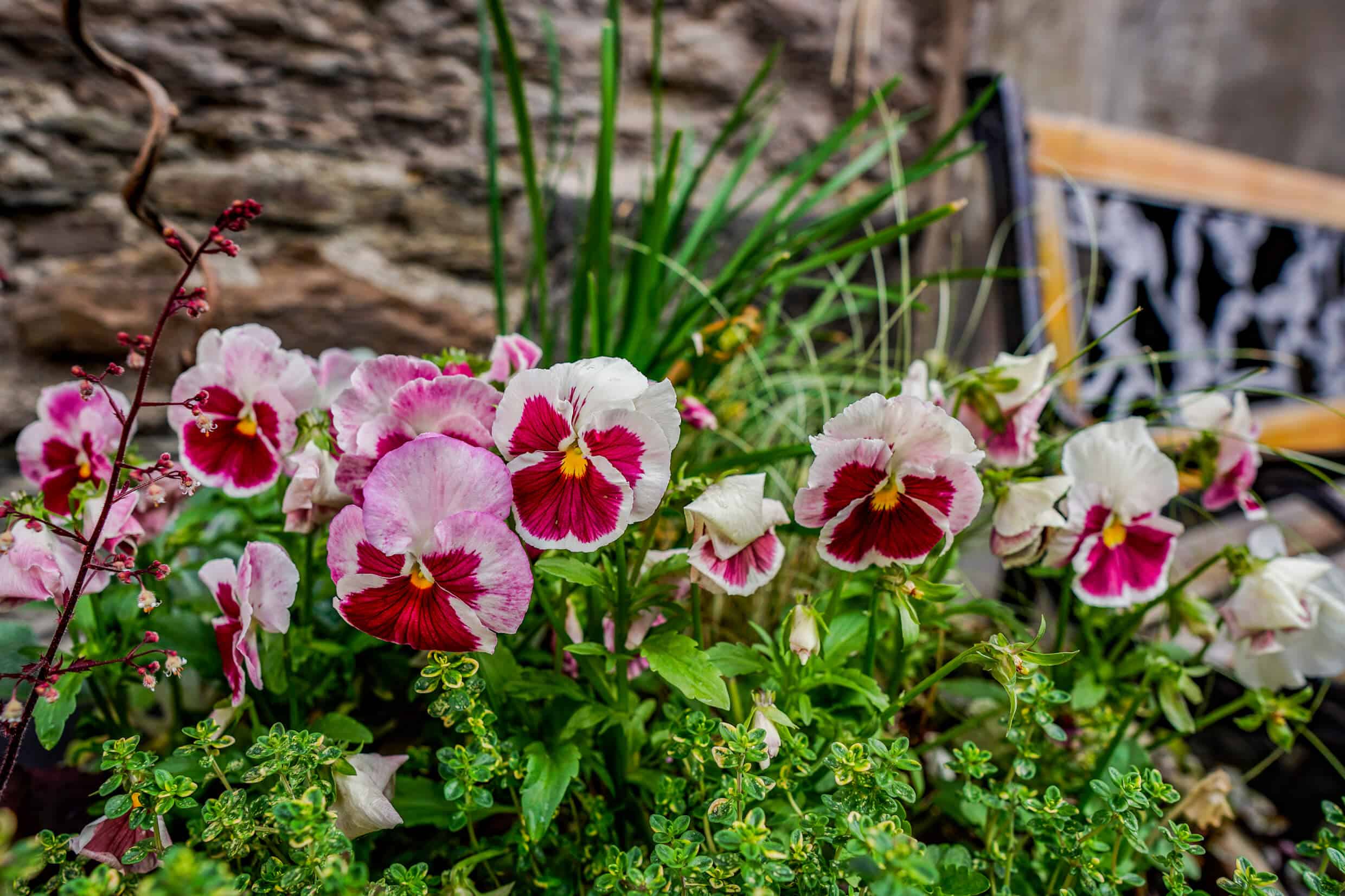 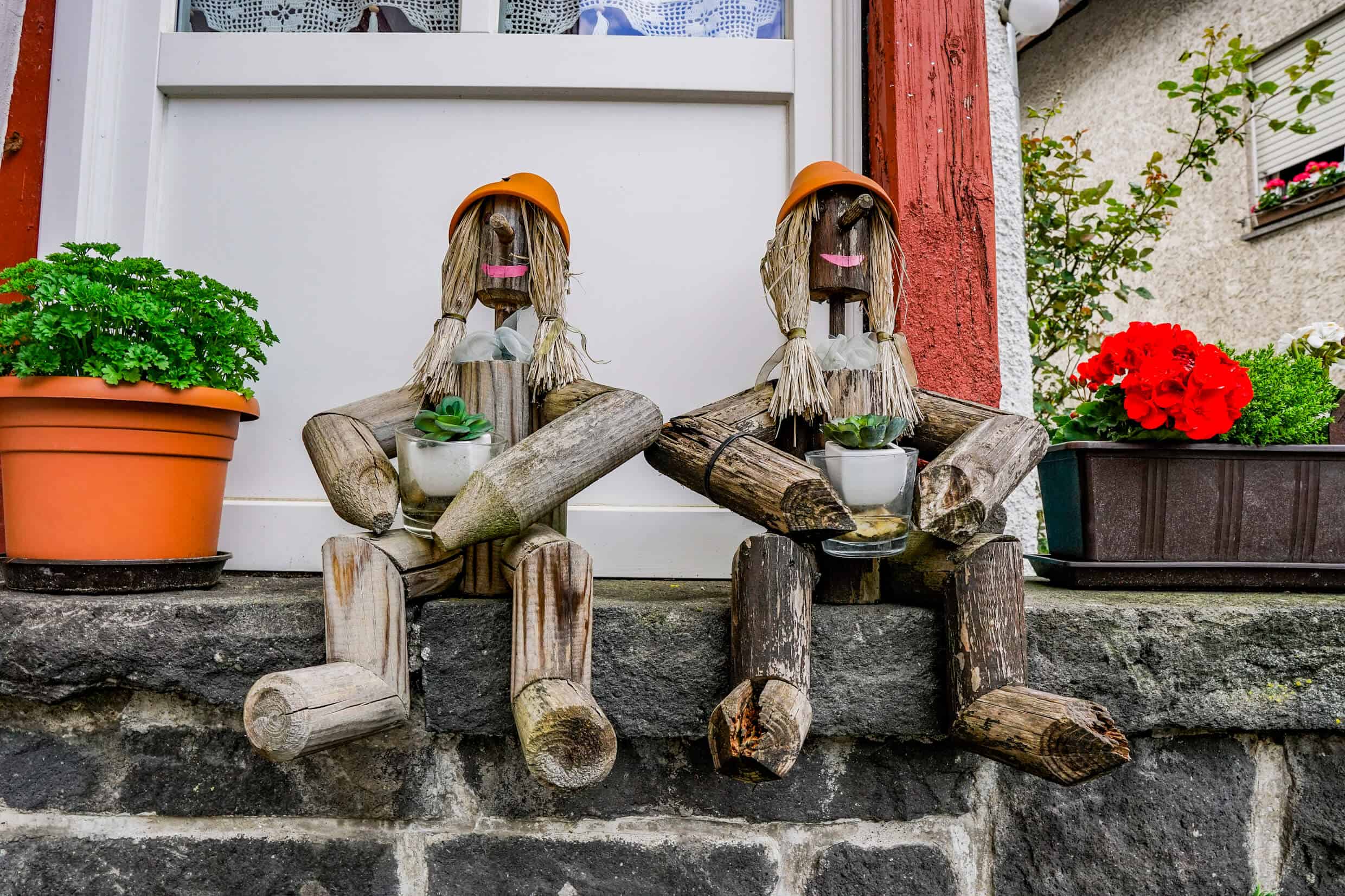 The Almost 1000 Years of History of Monreal

Although the oldest traces of a settlement in Monreal date back to pre-Christian times, the place was not mentioned until the 12th century as Cunisberch (Königsberg – King’s Mountain). In the following century, Monreal became part of the county of Virneburg. The then name Königsberg was translated into French, as was appropriate at the time. Monroial was born and developed over the centuries to the present Monreal.

Around the year 1220, the construction of the Löwenburg (Castle of Lions), which is also called Burg Monreal, began, as it is considerably larger than the Philippsburg, which was built later. Hermann III of Virneburg began the work, although he lacked the necessary permits and rights over the land, as it actually belonged to his brother Philipp. He saw this as a political move to strengthen his count dynasty, as the family’s ancestral seat – the Virneburg – was too far away from economic centers. His plan worked out. In 1306, Monreal was granted town privileges and the rights to organize a market, which could be held every Monday.

Since Monreal belonged to the area of the Trier archbishopric, the property fell to Trier after the death of the last Count of Virneburg in 1545. The Elector of Trier appointed a bailiff instead of reassigning the fief and was later merged with the Obermayen office.

Monreal was destroyed twice in the 17th century: once in 1632 by Swedish troops and then in 1689 by French troops during the Nine Years’ War. At the same time, the cloth industry was discovered in Monreal, which brought prosperity to the small town. The half-timbered houses still bear witness to this today. However, this peak phase came to a serious end in the second half of the 19th century, as the clothiers could no longer keep up with the international competition. As a result, Monreal became impoverished.

The recovery of the city came in the 1930s, when people began to see the charm of the Eifel and Monreal’s romantic old town with its pretty half-timbered buildings became a destination for excursions. I can absolutely understand it, as it really is a beautiful old town. The little town lies in the valley, the Eltzbach flows through it and the two halves are connected by three old bridges. 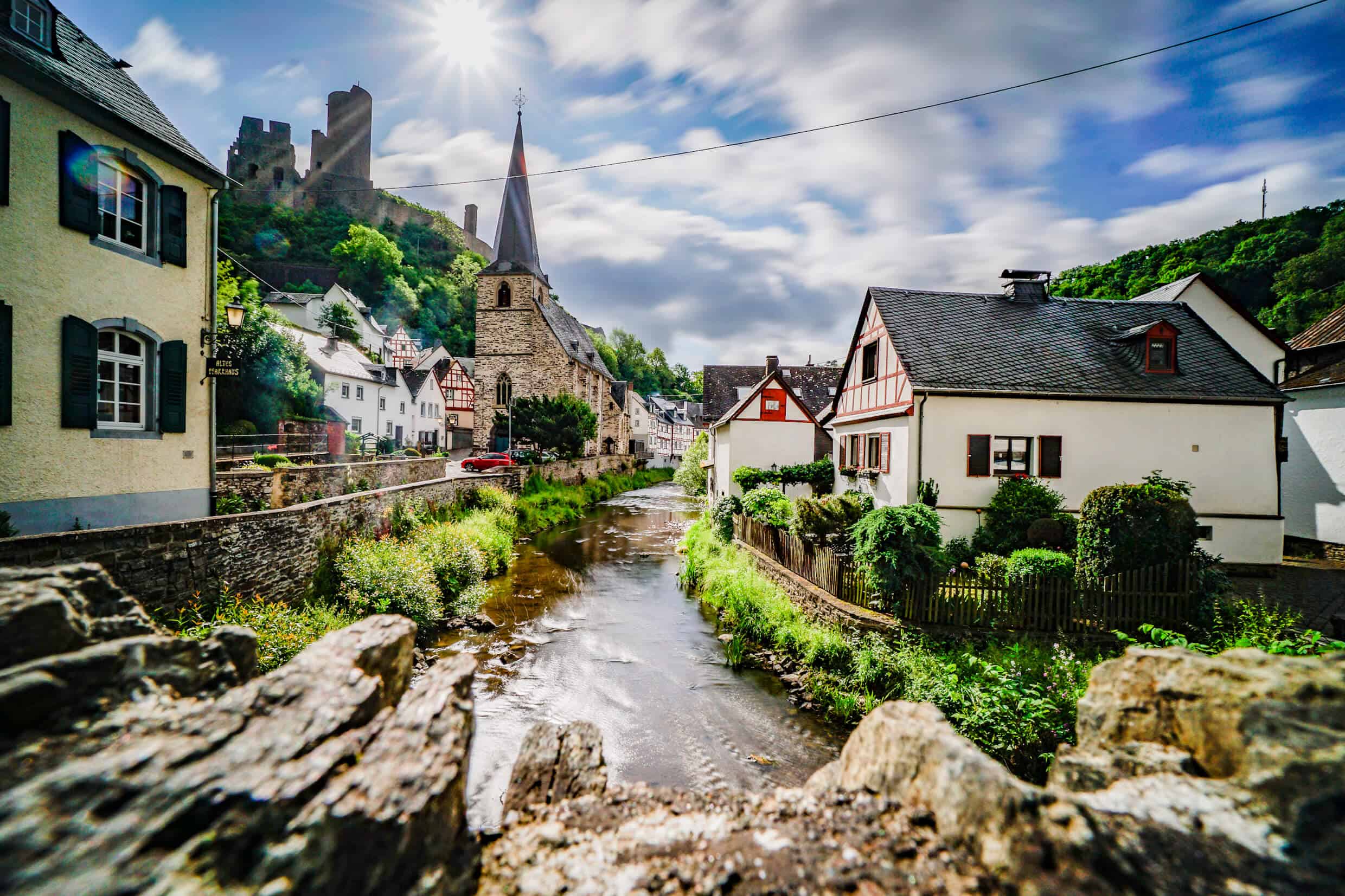 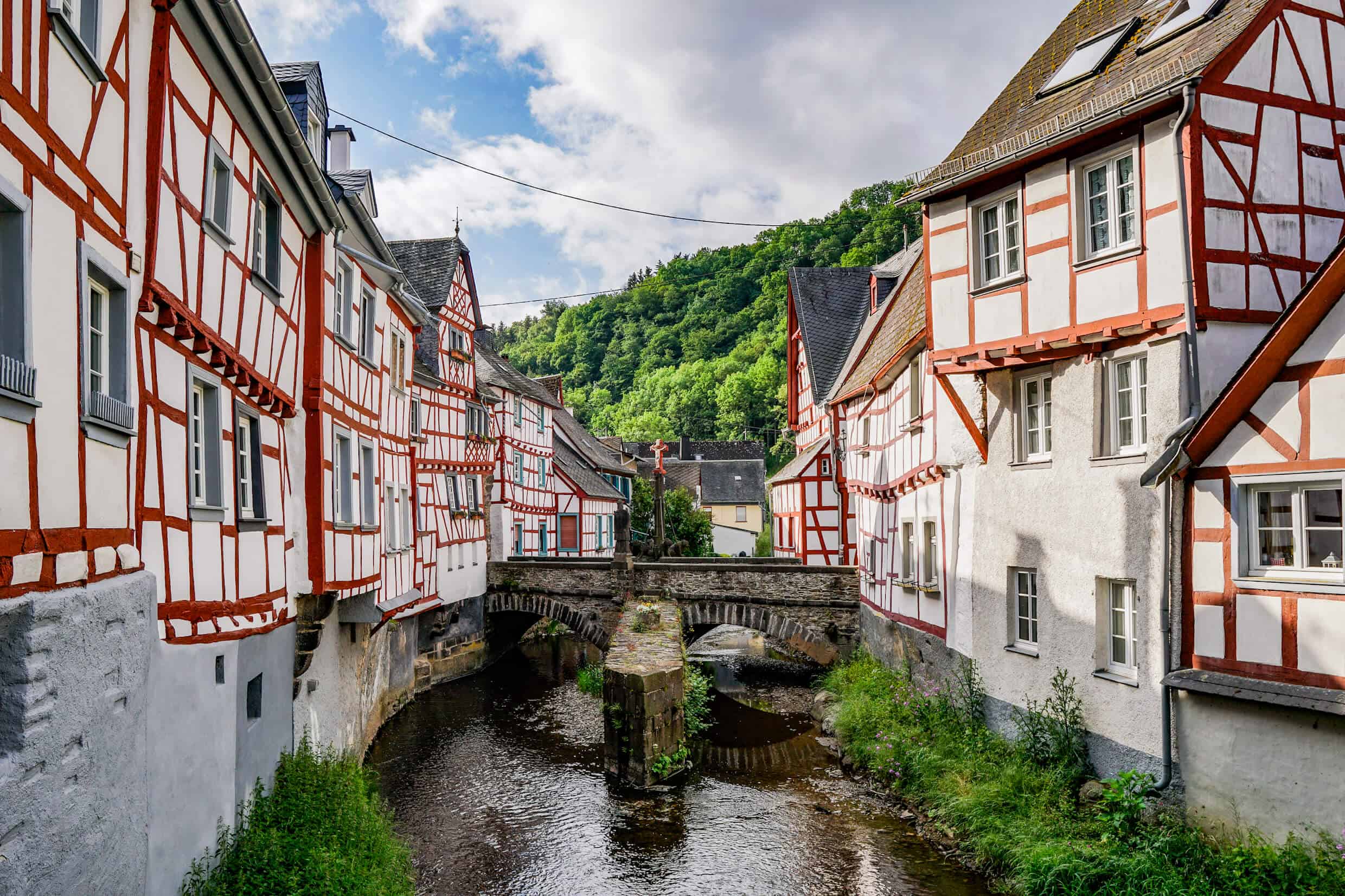 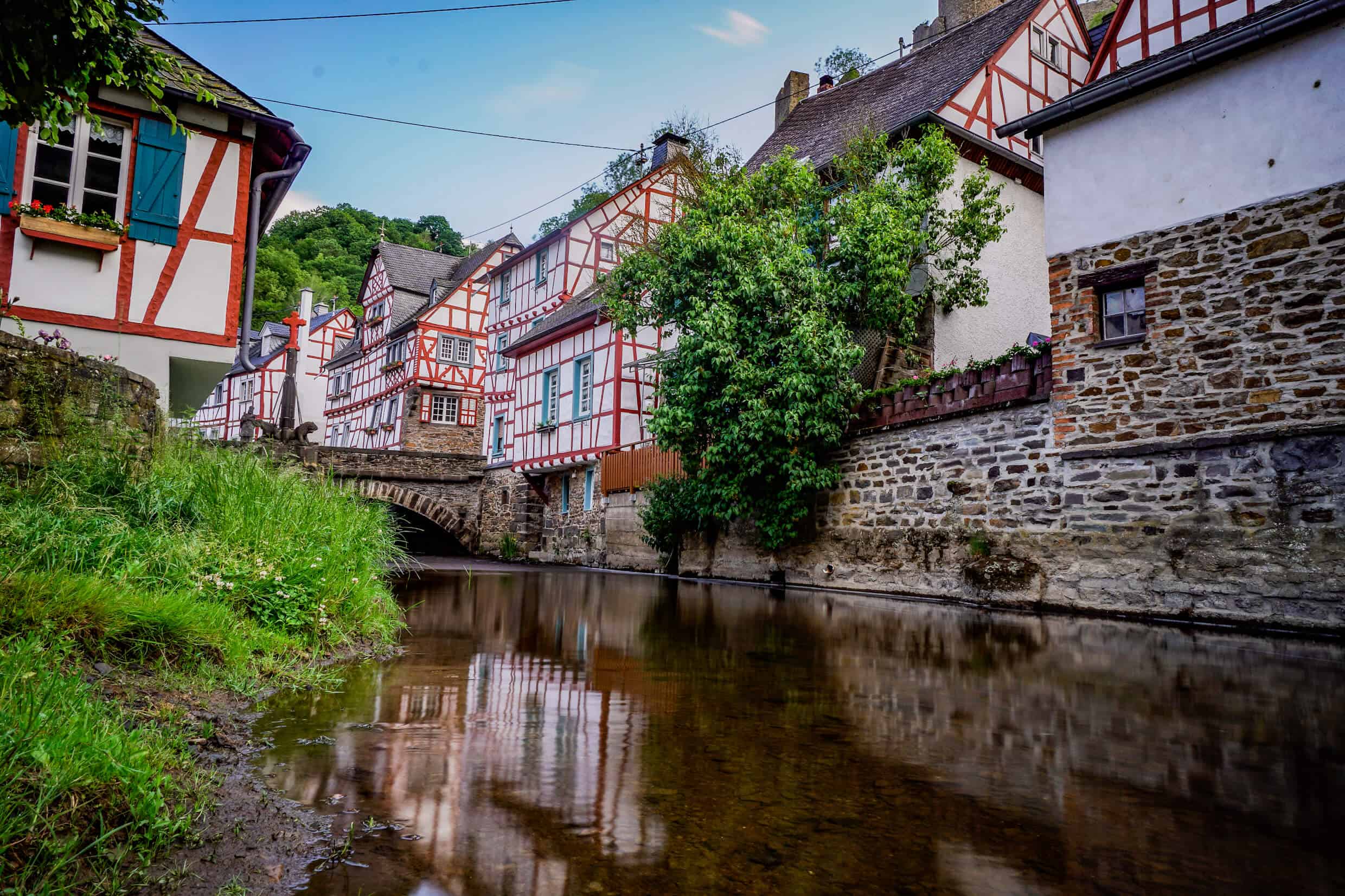 Not only the fairytale half-timbered houses can be admired here, but also the late Gothic stonemasonry, which is presented on the bridges, among other things. For example on the Elzbrücke: here the Lion Monument awaits you. These four lions first stood at the gates of Monreal Castle to guard it. That is why it got its name – the Castle of Lions. Here is one of them: 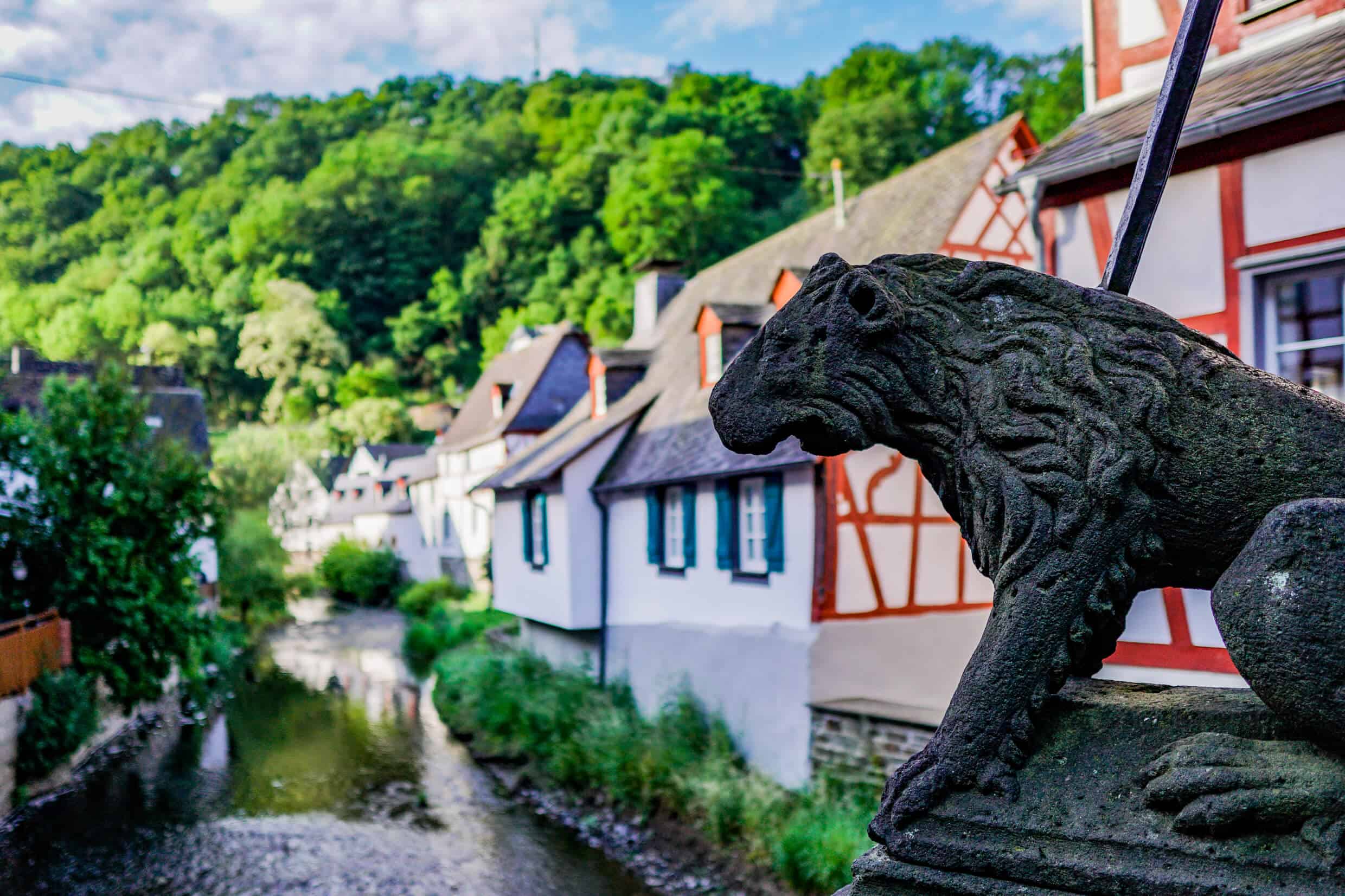 Monreal offers the visitor a small insight into the history described above. These were turbulent centuries and here they come to life. In order to illustrate this, in the years 2003/2004, information boards were installed all over Monreal. 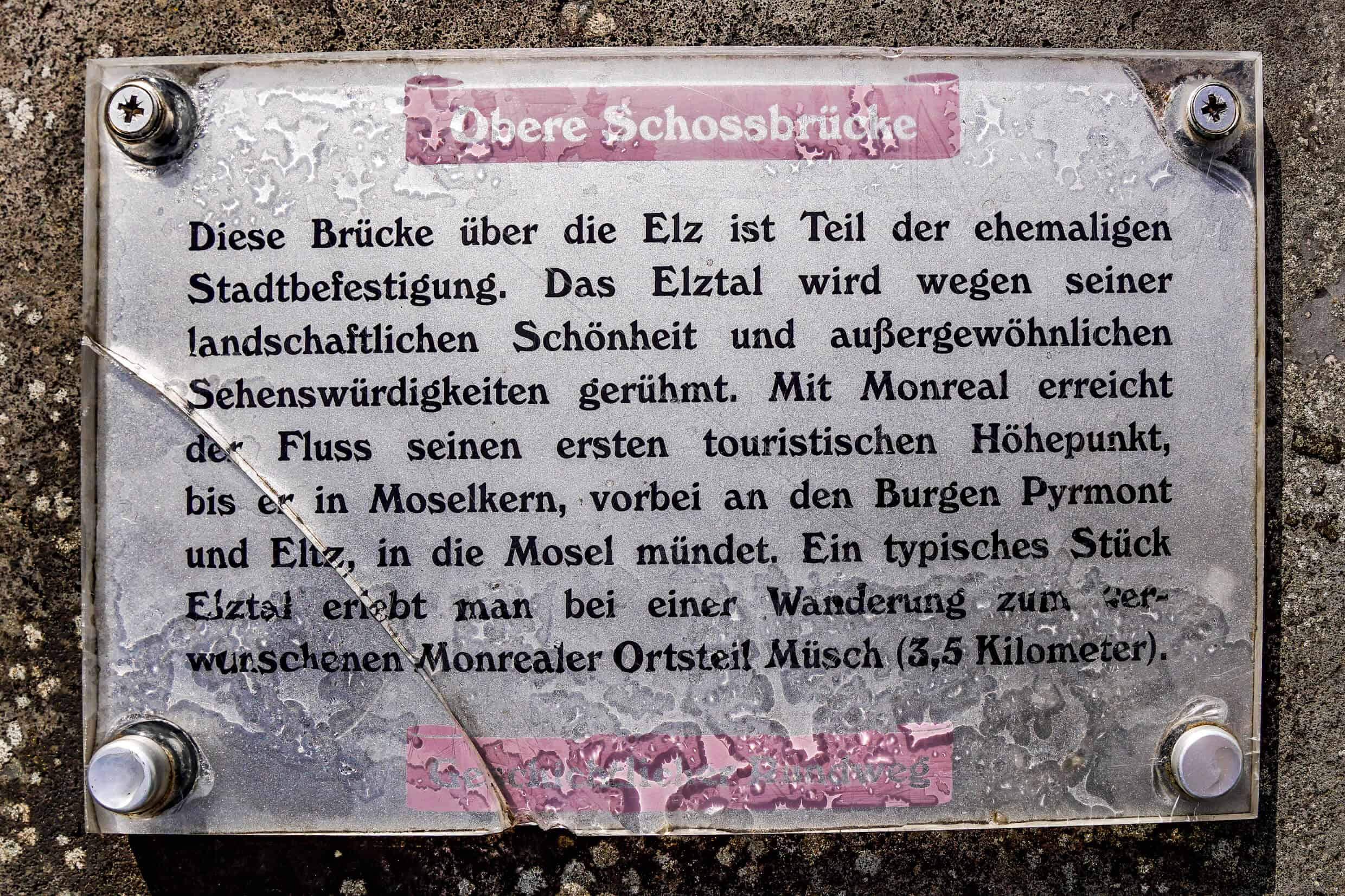 The Two Castles – The Löwenburg and the Philippsburg

From Monreal, a path leads up to the two castles, the Löwenburg (Castle of Lions) and the Philippsburg (Castle of Philipp). You can’t actually miss them, firstly because the path signposted, and secondly because Monreal is really small. 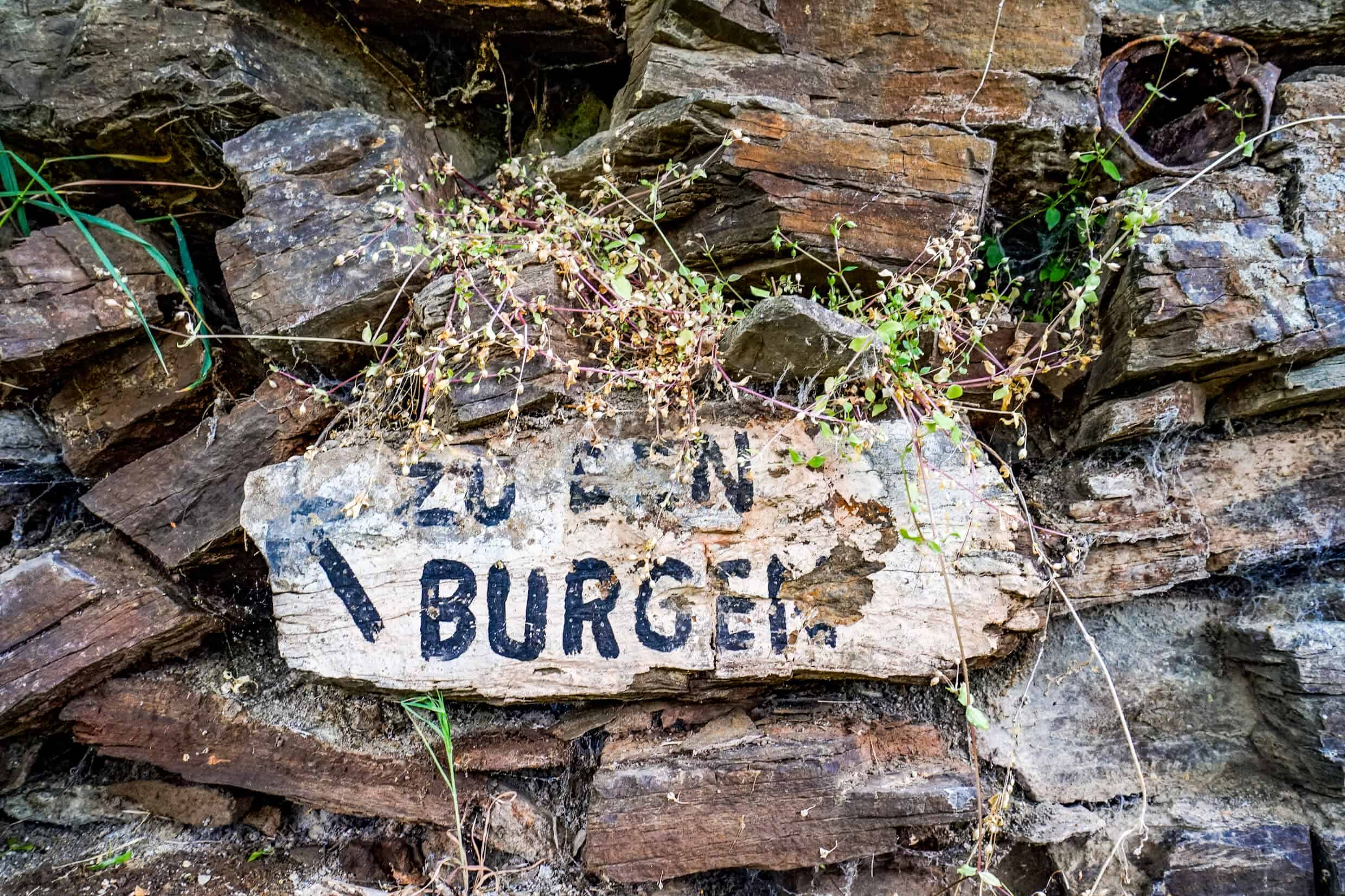 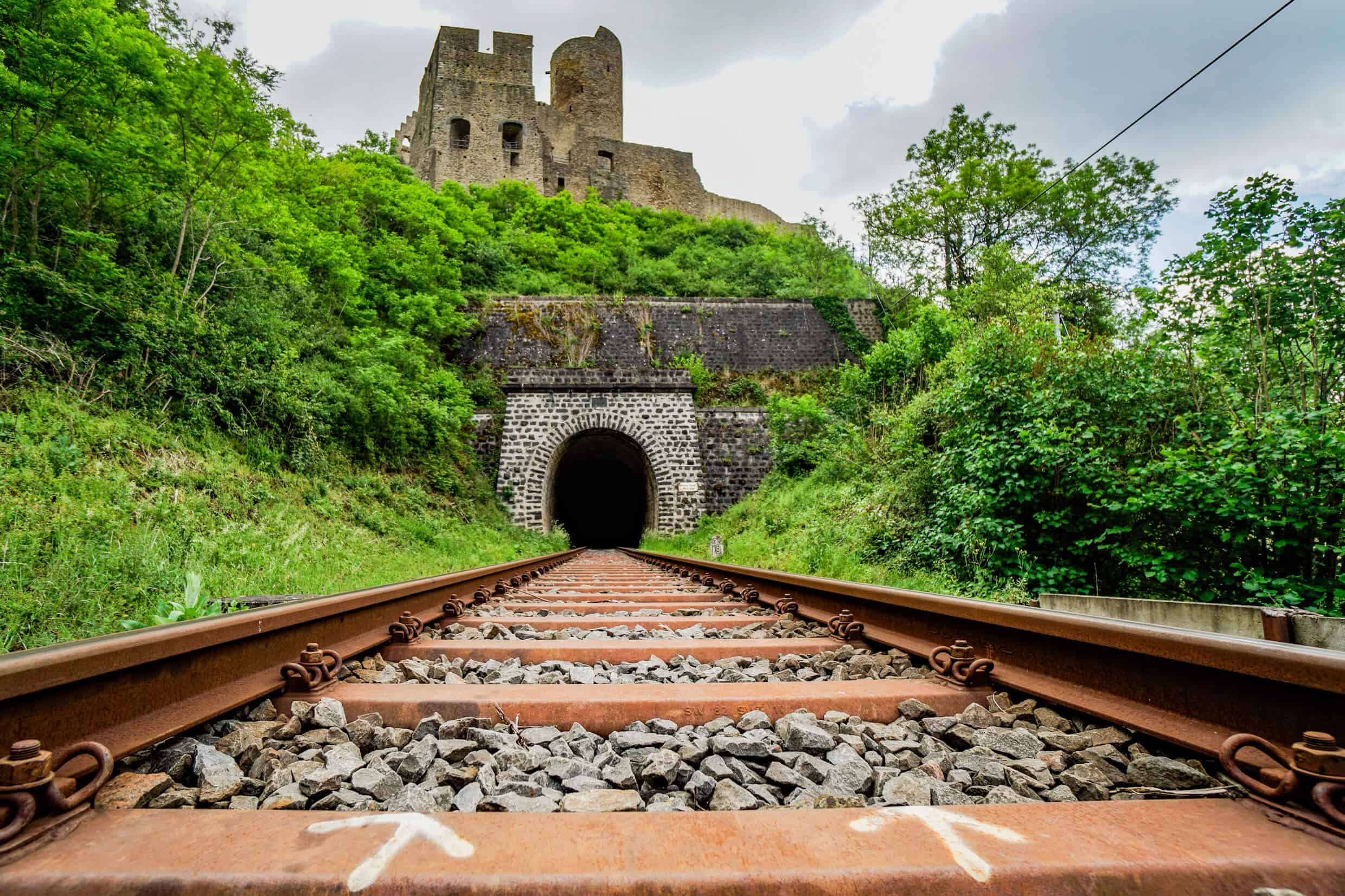 The Löwenburg is on the right and is a so-called spur castle, which is the most common type of high-altitude medieval fortifications in Germany. It means that the castle is not on the summit, but steeply above the valley on a mountain spur. The Löwenburg is the bigger of the two and one of the highlights of the whole trip. This is the view of the Löwenburg when you stand at the Philipsburg: 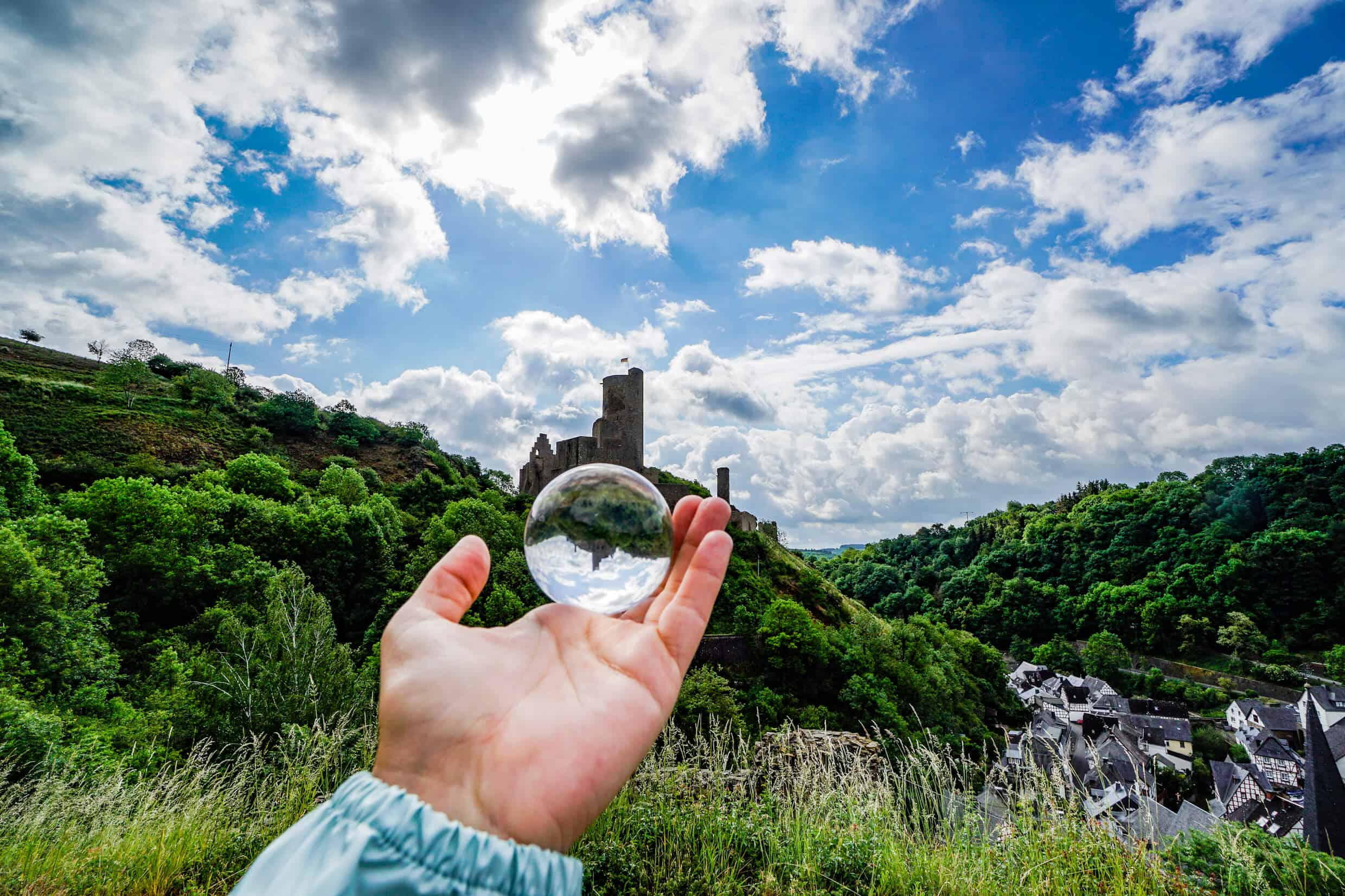 You can explore them at your leisure and there are also information boards so that you always know what the towers and walls used to be. Because it’s not self-explanatory, unless you happen to be an expert in Medieval Studies. 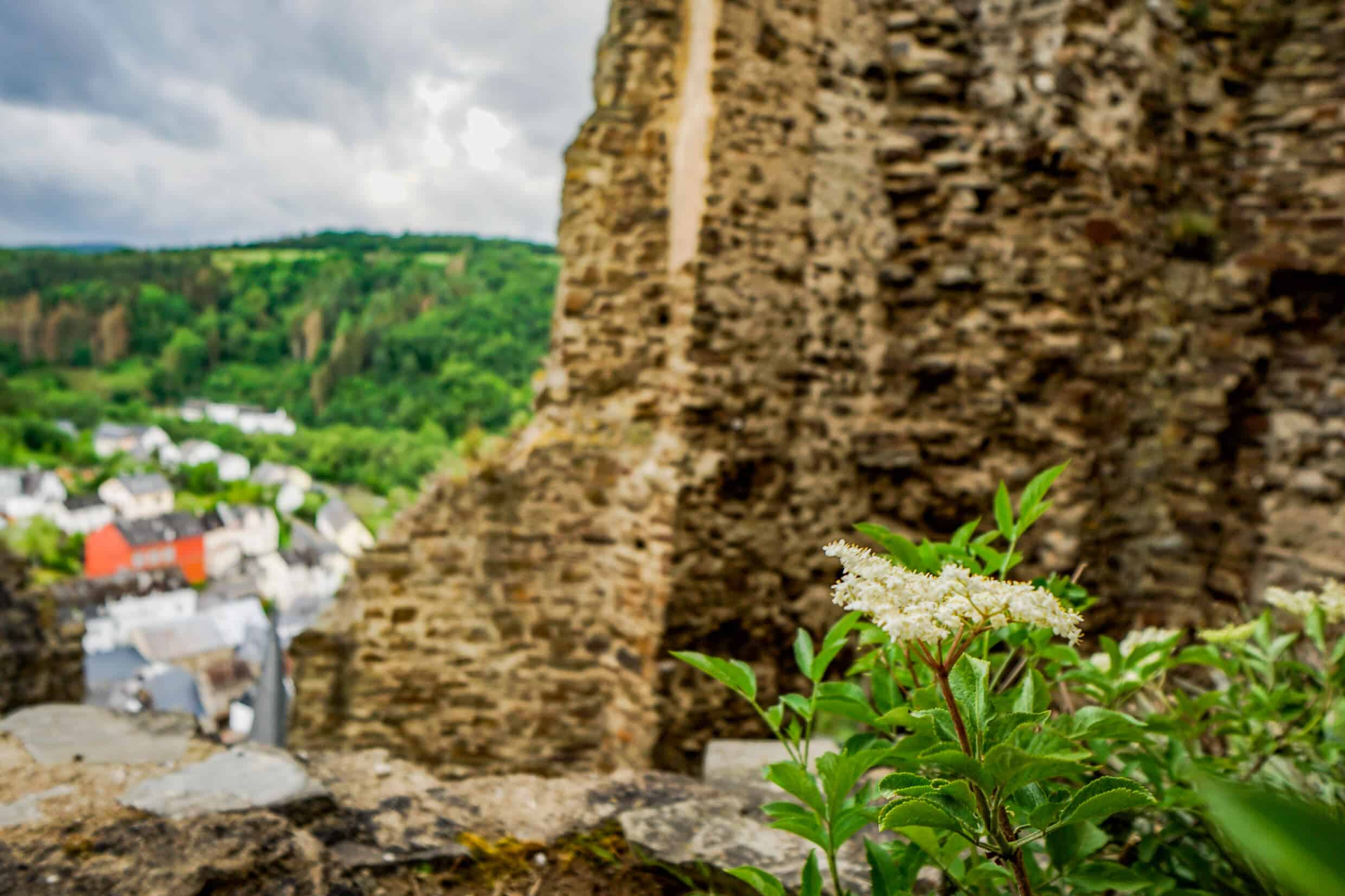 I particularly liked the fact that the tower is walkable. For this you should either have a flashlight or use your mobile phone as such. But it is not a long way to the top and so I arrived there only slightly out of breath. The walls are quite thick so that I personally found the view rather mediocre. Nevertheless, I love to stand in such places and think about how the people who lived here must have felt. What they thought. What stories the walls would tell me if they could speak. 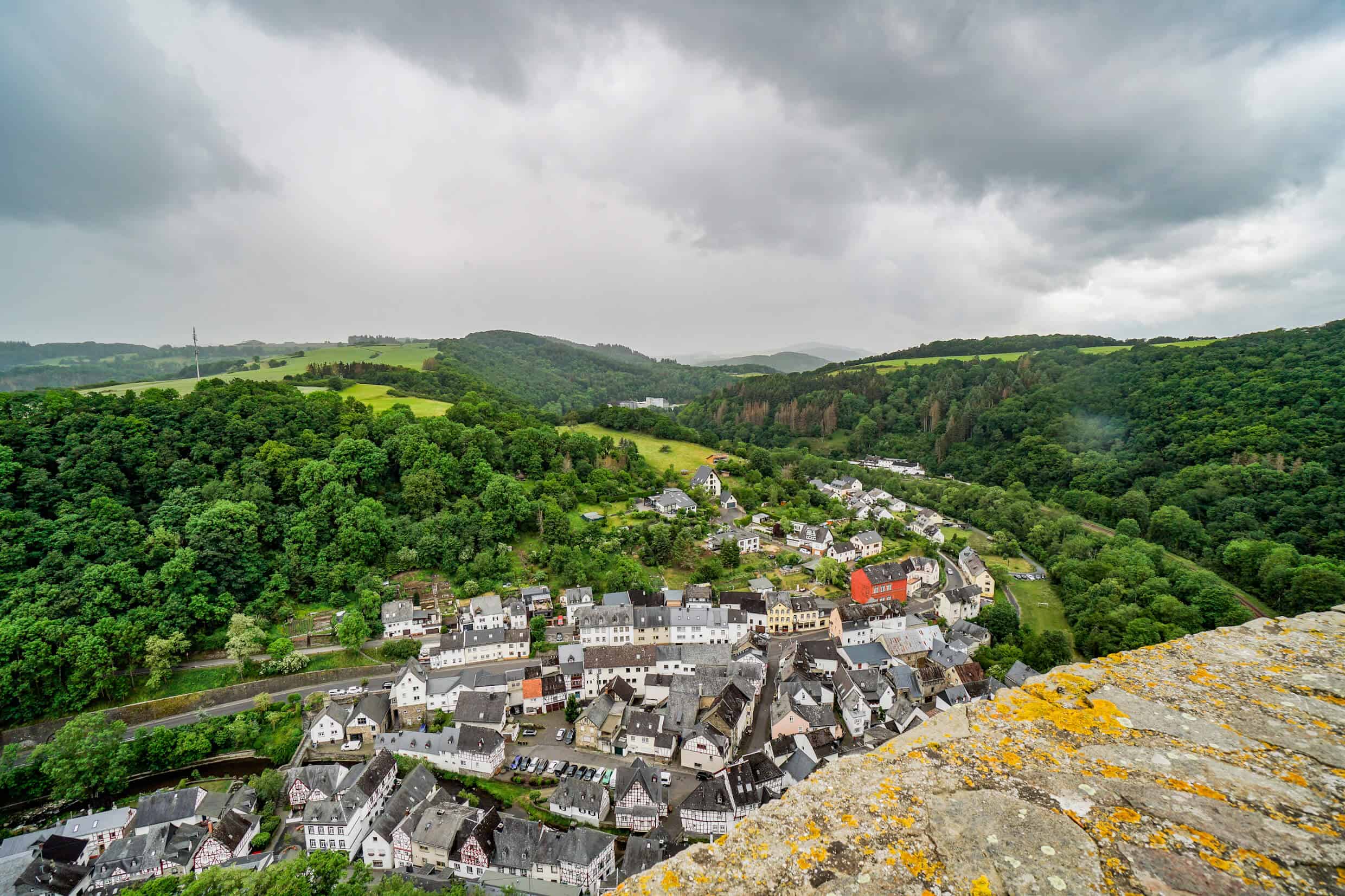 From the Löwenburg you also have a good view of the Philippsburg. It was also built in the 13th century and was popularly called Rech – which is Middle High German for deer – because of its smaller size. 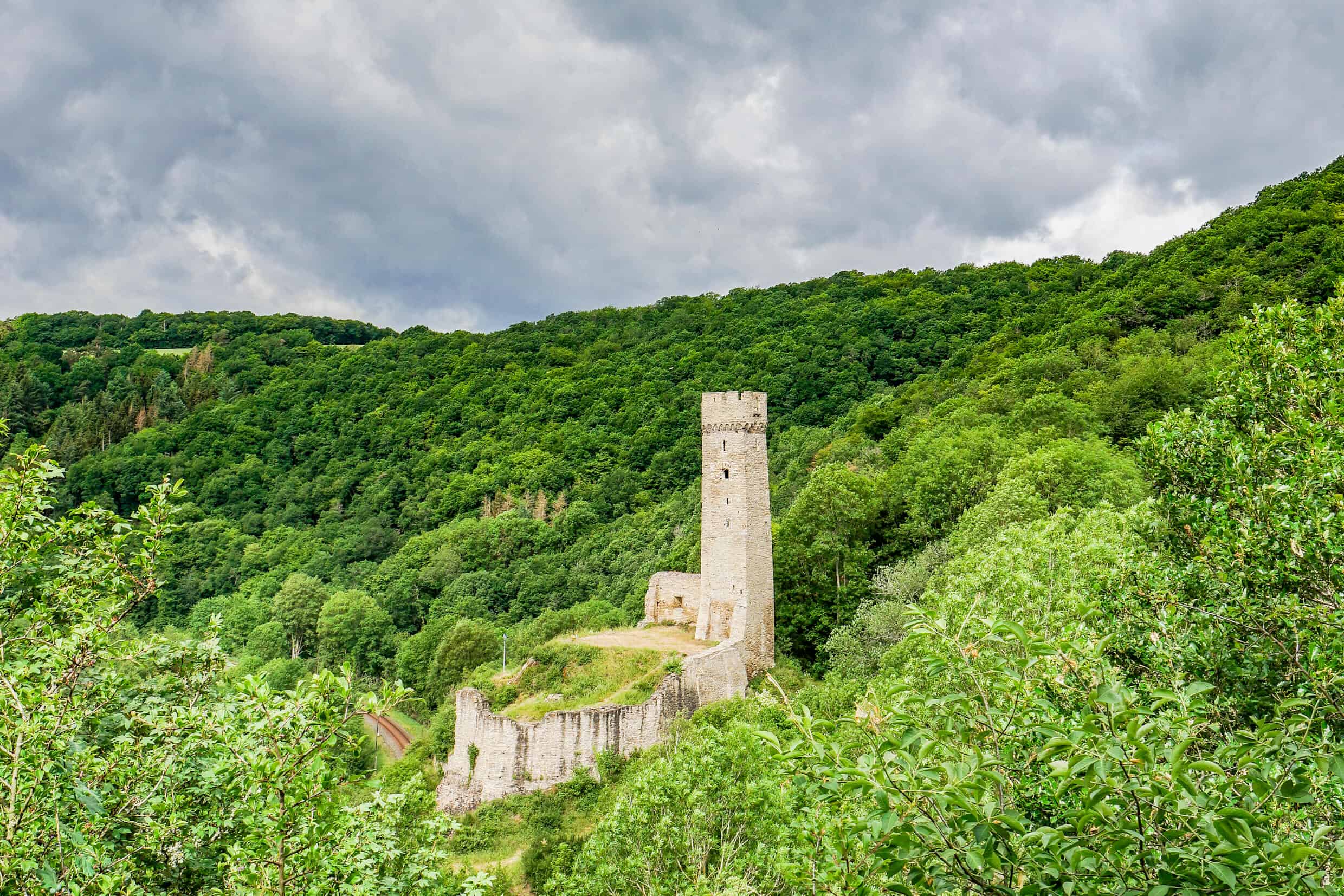 It is not clear why the second castle was built at all: one theory says that it was built as a forework or outer work of the Löwenburg. However, there is also a local legend according to which the castle was a kind of answer from Philip to his brother Heinrich, who had built the Löwenburg illegally on his brother’s property. To me personally, it is not quite clear why this “answer” should be less impressive than the original. But I am not a medieval count… So what do I know? Hah!

In the 14th and 15th centuries, the complex was further extended and served several times as a widow’s seat of the count’s family. In the 16th century, Monreal was already the ancestral castle of the family and had replaced the Virneburg as its ancestral home.

The Philippsburg is especially worth a visit because you have a great view of the entire panorama from it and the tower is open to the top. So you can take cool pictures up to the top. 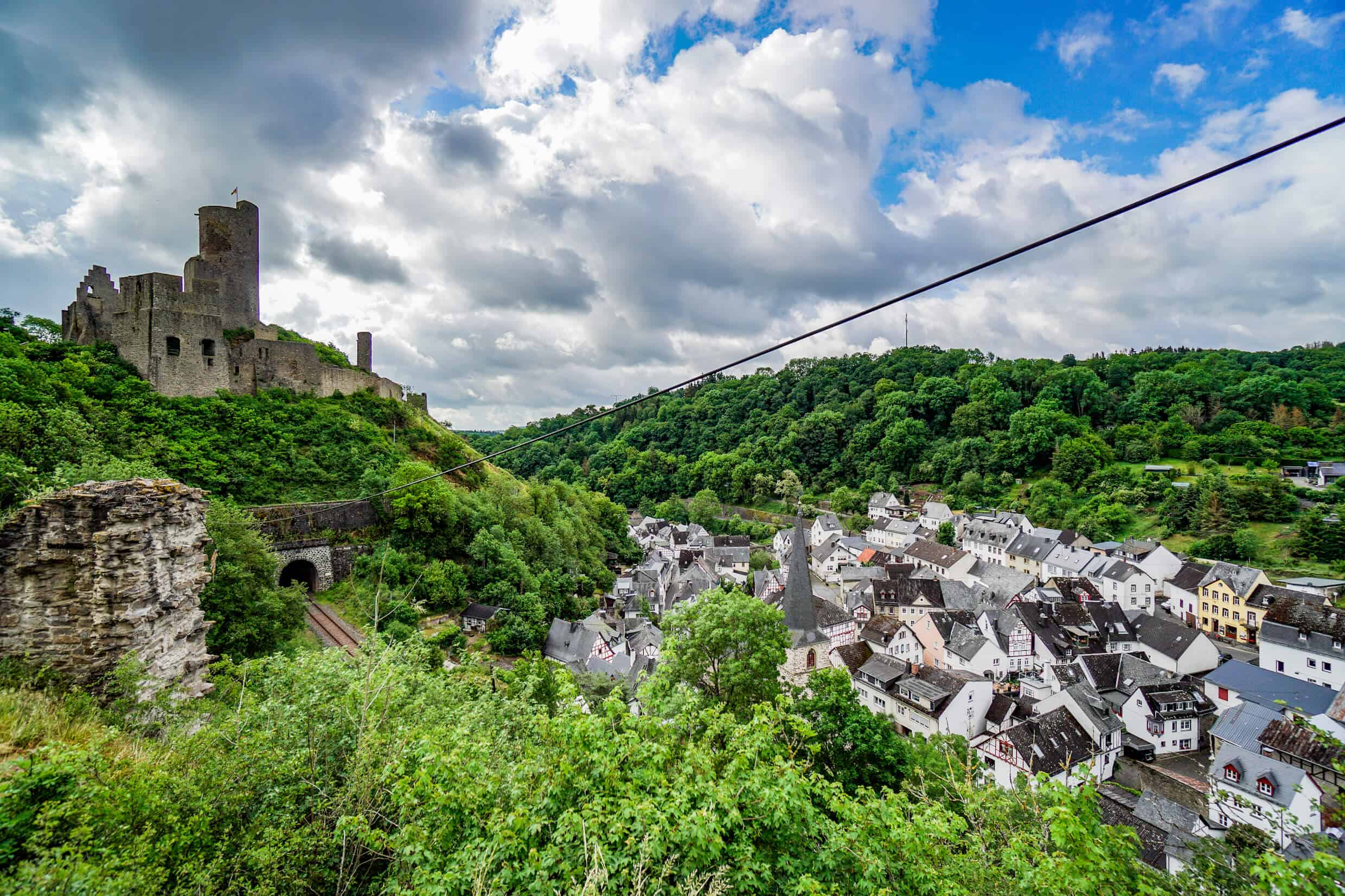 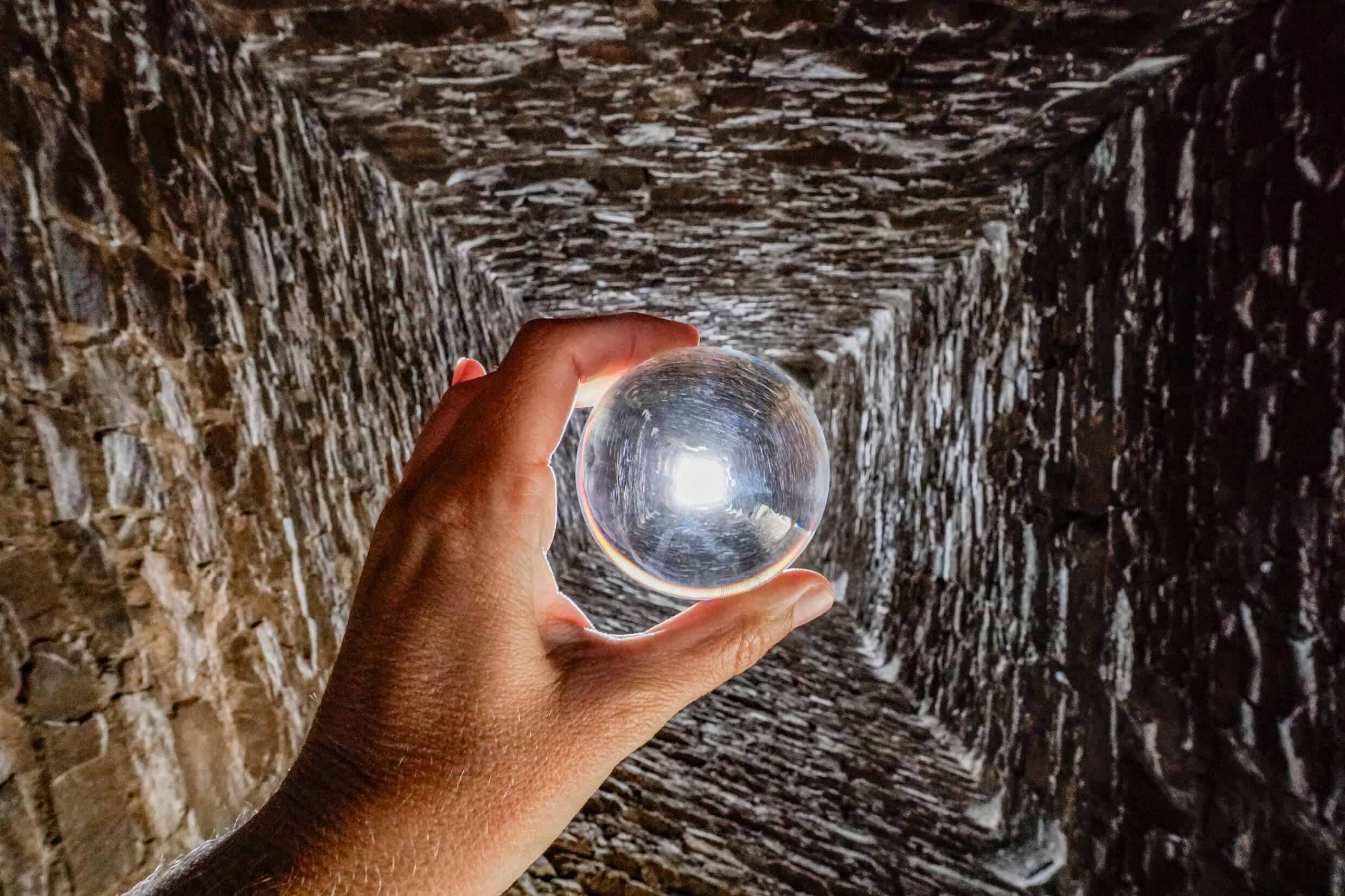 In the Rhine-Moselle-Eifel region, there are the so-called dream paths. These are well-signposted premium hiking trails in this region. Such a dream path also leads through Monreal: The Monrealer Ritterschlag, about which I write more below, even though I, unfortunately, haven’t been able to walk it myself yet.

The volcanic Eifel is today a green and fertile land. This is how the nickname “green heart of Europe” came into being. Excursions in this region are not only something for nature lovers, but also offer a journey into days long gone by: peaked mountain cones, geological formations, and the crater lake Laacher See bear witness to the past as a volcanic landscape.

Here are a few of the Eifel’s dream paths that invite you to go hiking:

The almost 14-kilometer-long hiking trail is one of the Eifel’s dream paths and goes right through Monreal and the castles. It is definitely on my bucket list and as soon as I have walked it, you will be the first to know about it here on Barbaralicious!

The highlights of Monreal’s Knighthood are:

If the afore-mentioned tours are too long for you, you can also walk one of the mini dream paths. These are only between three and seven kilometers long and can, therefore, be walked in a maximum of two hours. They are great for exploring other highlights of the region – such as Monreal or Eltz Castle, to name two examples – in addition to the short hike.

On my tours, I am mainly on the road with clothes and equipment from Decathlon. My hiking boots for example are waterproof half-height hiking boots. In general, if you are a regular hiker or outdoor enthusiast, I recommend that you buy some appropriate clothing and shoes. In the worst case, normal sneakers will do, as long as they give you a good grip and you can handle them if they get dirty. On hikes like the one in the Margarethen Gorge, this can happen faster than you can look. 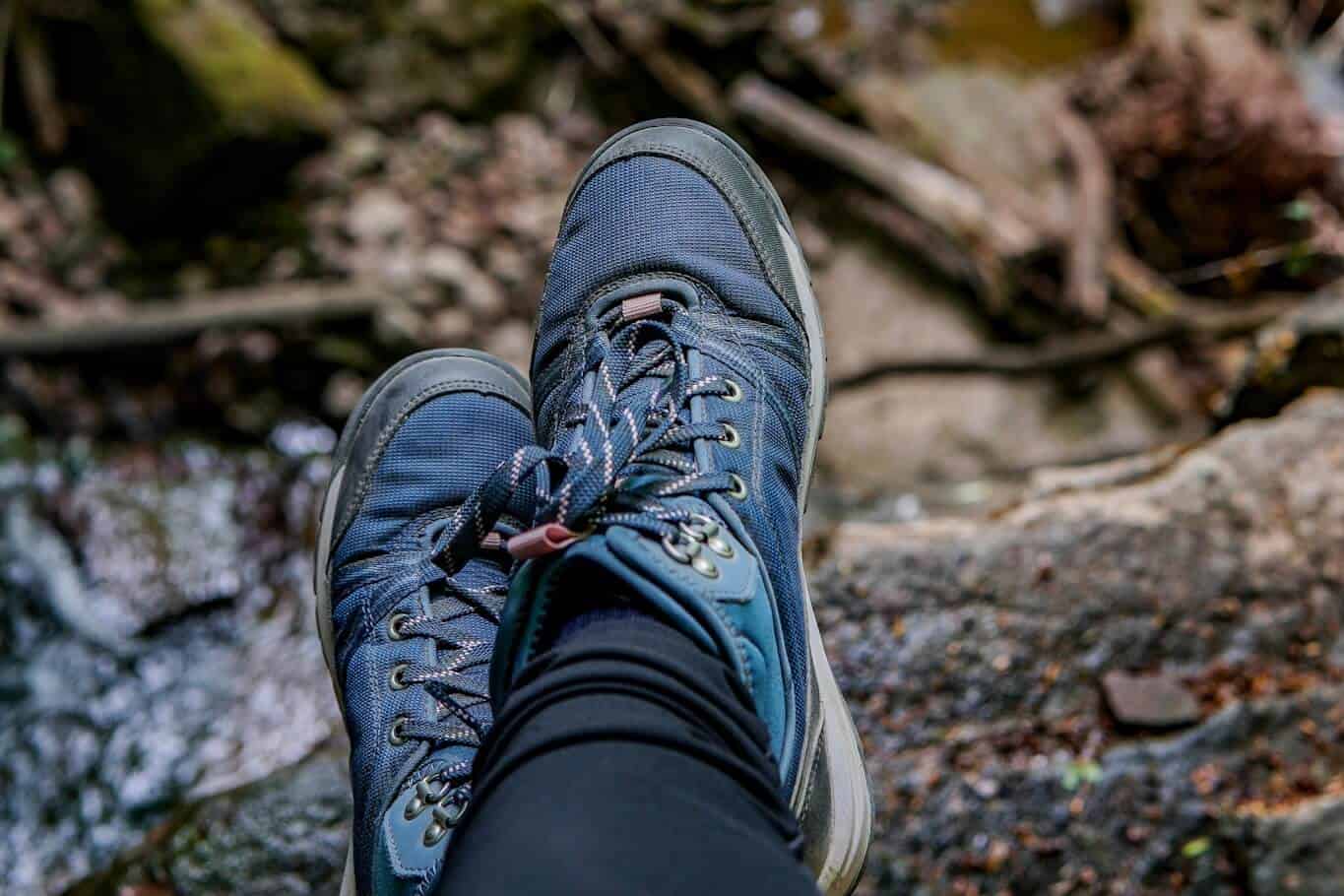 I would also recommend protection for your phone. I got a nice scratch when I was hiking in Margaret Gorge. And that’s even though my phone didn’t fall off or bump into anything. At least not consciously. Therefore, I have now an outdoor case.

By the way, I take my pictures with a Sony Alpha 6500*. I usually switch between my two favorite lenses: a 10-18mm wide-angle lens* and a 30mm fixed focal length*. In case you’ve ever wondered how I take pictures of myself even though I’m often on the road alone: I have a Rollei tripod*.

To be honest, I had never heard of Monreal. But since I’m always happy about photo tours with my buddy Jan and he has a good hand for choosing cool locations, I didn’t have to think twice about joining him or not. And that was absolutely right! Monreal was just adorable and we had a great tour. 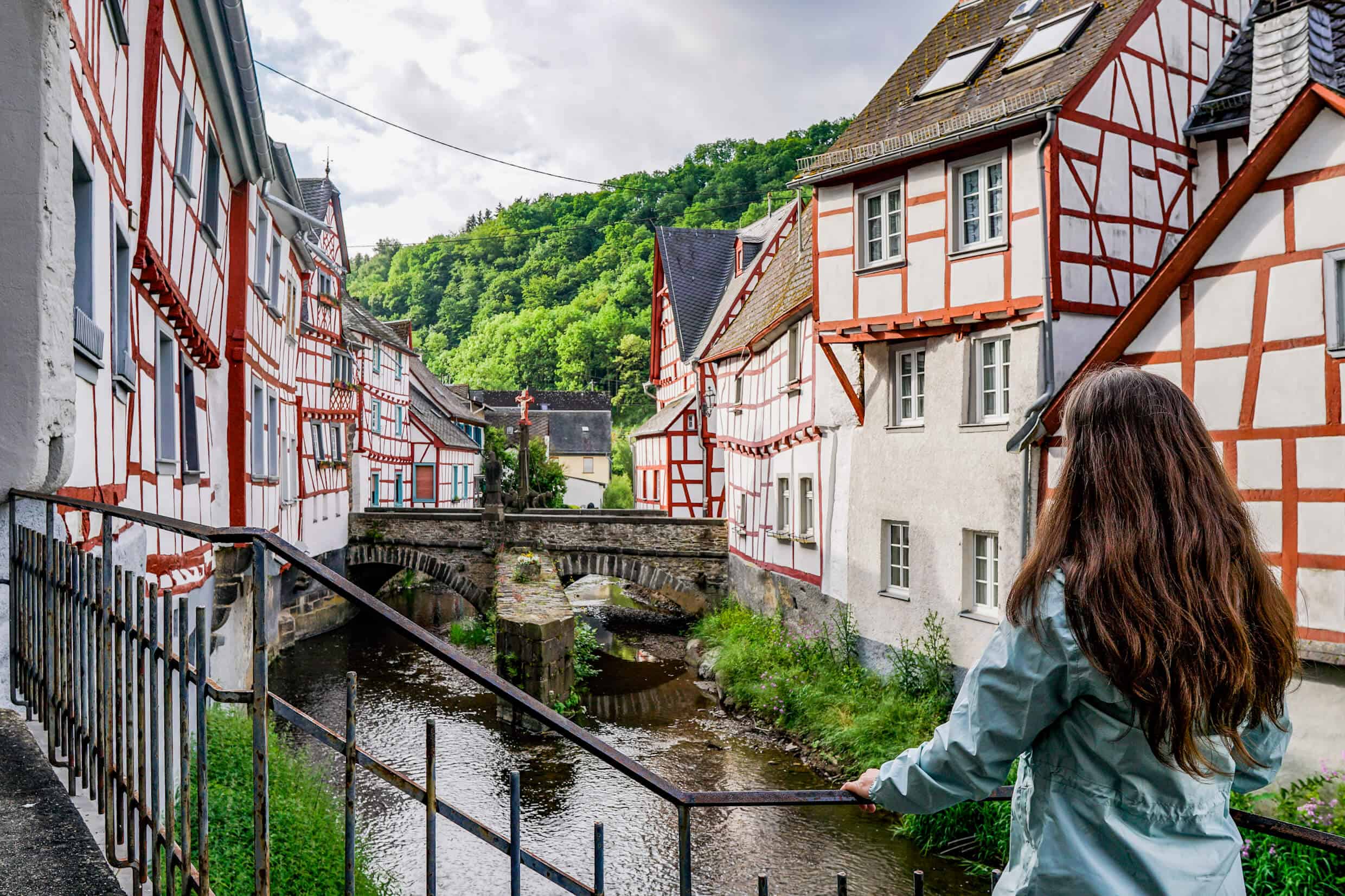 Have you ever been to Monreal? Or have you ever heard of the romantic place in the Eifel?

PS: All links with an asterisk (*) are affiliate links!