Jarabacoa – Where The Dominicans Go On Vacation

Jarabacoa is a small town in the mountains of the Dominican Republic, which is not yet crowded with tourists. After about six weeks in Cabarete with beaches and lagoons I wanted to discover another side of the country. I was told that Jarabacoa was a place where locals go on vacation. An authentic village that was additionally the perfect spot to go on hikes, to do horseback riding, rafting and canyoning.

One of the highlights is the Pico Duarte: the highest mountain in the Caribbean! But I couldn’t stop thinking of the 7000 steps of the Adam’s Peak in Sri Lanka or the 1-day hike in Artenara that made my muscles hurt so much. That’s why, in the end, I decided not to climb Pico Duarte which would have been 80 kilometers of walking in only three days.

By the way, this is the very first drone shot that I ever took! The city center of Jarabacoa is behind the drone, so it’s not that idyllic. 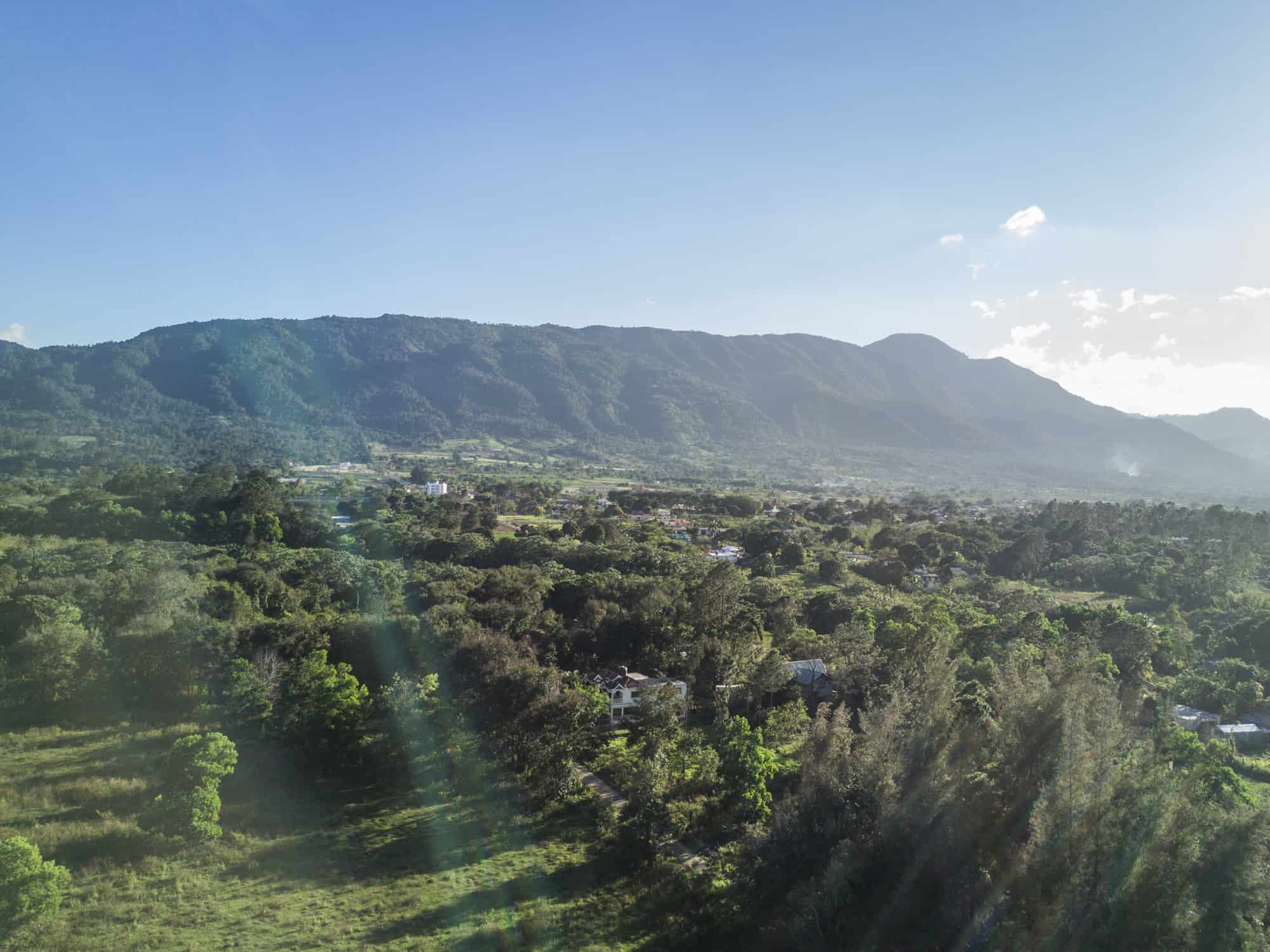 Then the Jarabacoa Mountain Hostel sent me an invitation: They needed a little bit of Social Media Support and are happy to have a special place in this article on Barbaralicious. That’s why accepted the invitation and stayed for one week in this hostel that I call luxurious without feeling bad about it. 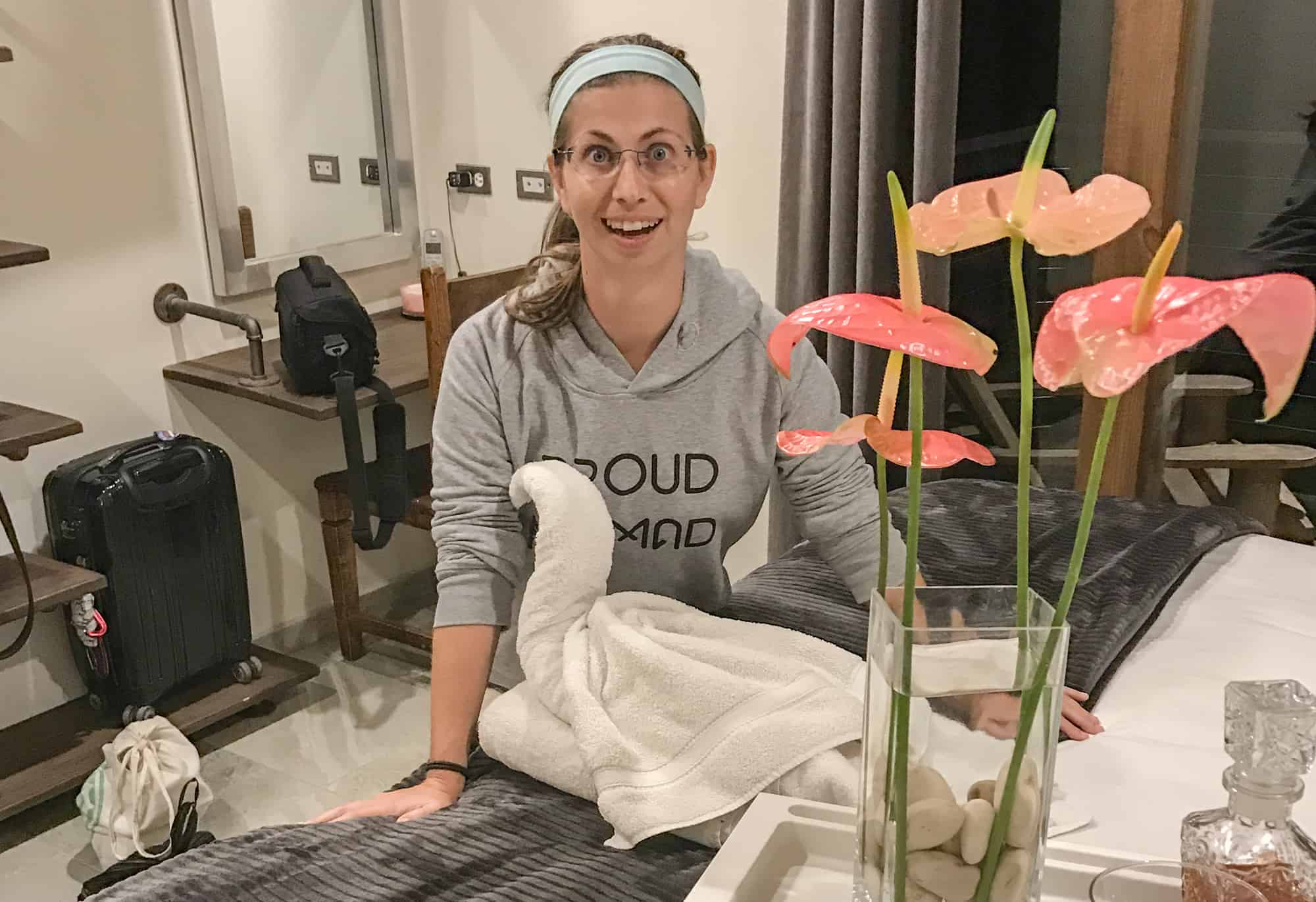 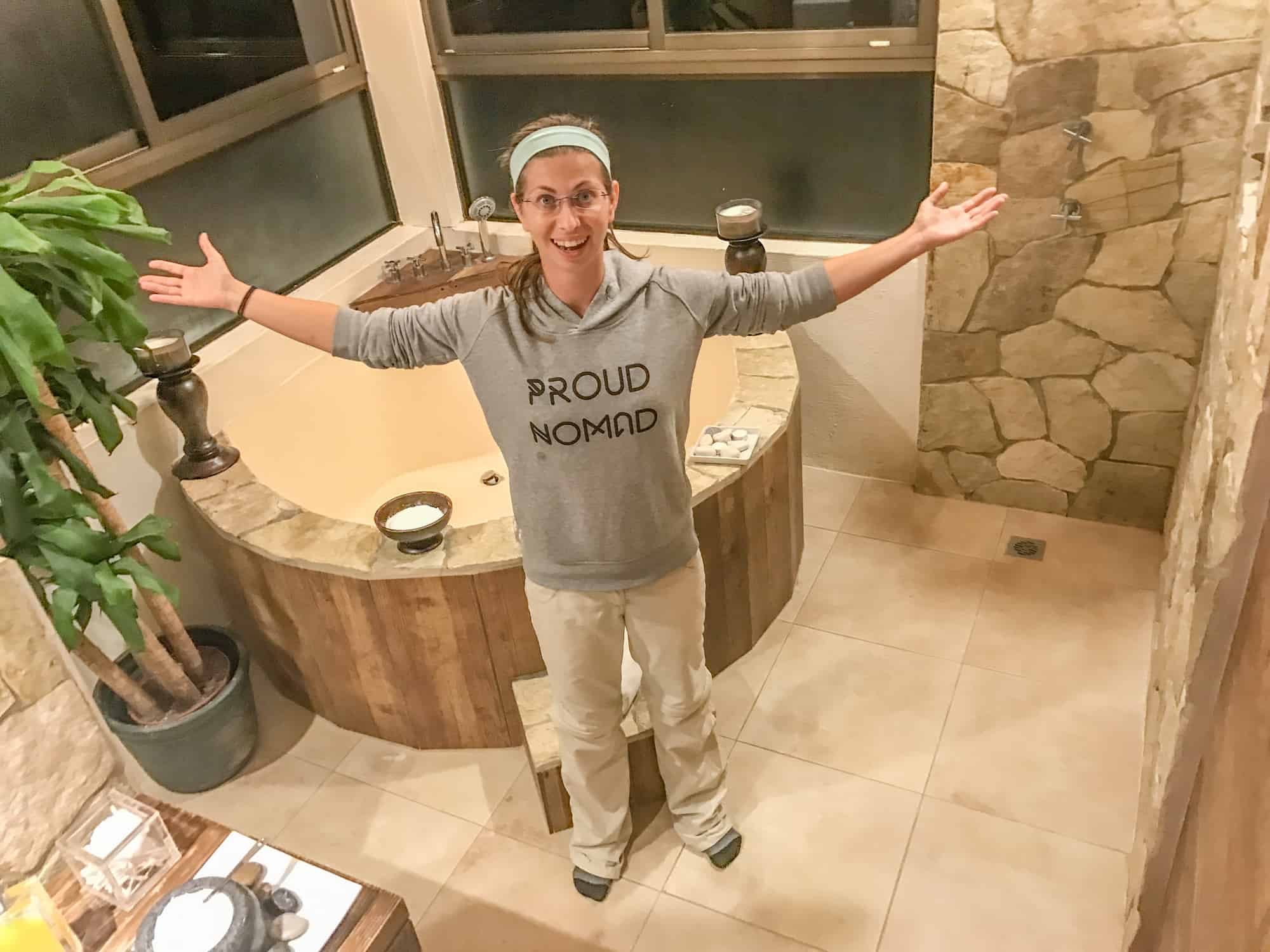 I was in a private room, but the Jarabacoa Mountain Hostel has beautiful dorms, too. All rooms have a balcony and the kitchen is the cleanest and best equipped that I have ever seen in a hostel.

Have a look at the video that I added in the end of the article! You will see how nice it is!

At first we did a hiking trip to the Secret Waterfall. It’s “secret”, because you need a local to get there and to show you the way. I did the hike with David from JarabacoaEcoAdventures , a young entrepreneur who is doing a really good job as a guide. I can recommend him 100 percent. He is doing tours to Pico Duarte as well.

We left the car in front of the house of a local after he picked me up at the hostel. The hike was around 15 minutes over a small stream in the woods and some… pipes!? Yes, there were pipes everywhere and we had to balance over them. Be careful if you go there: They can be slippery!

The last part was through icy water until the hips. But when we had surrounded the rock we saw the beautiful Secret Waterfall. 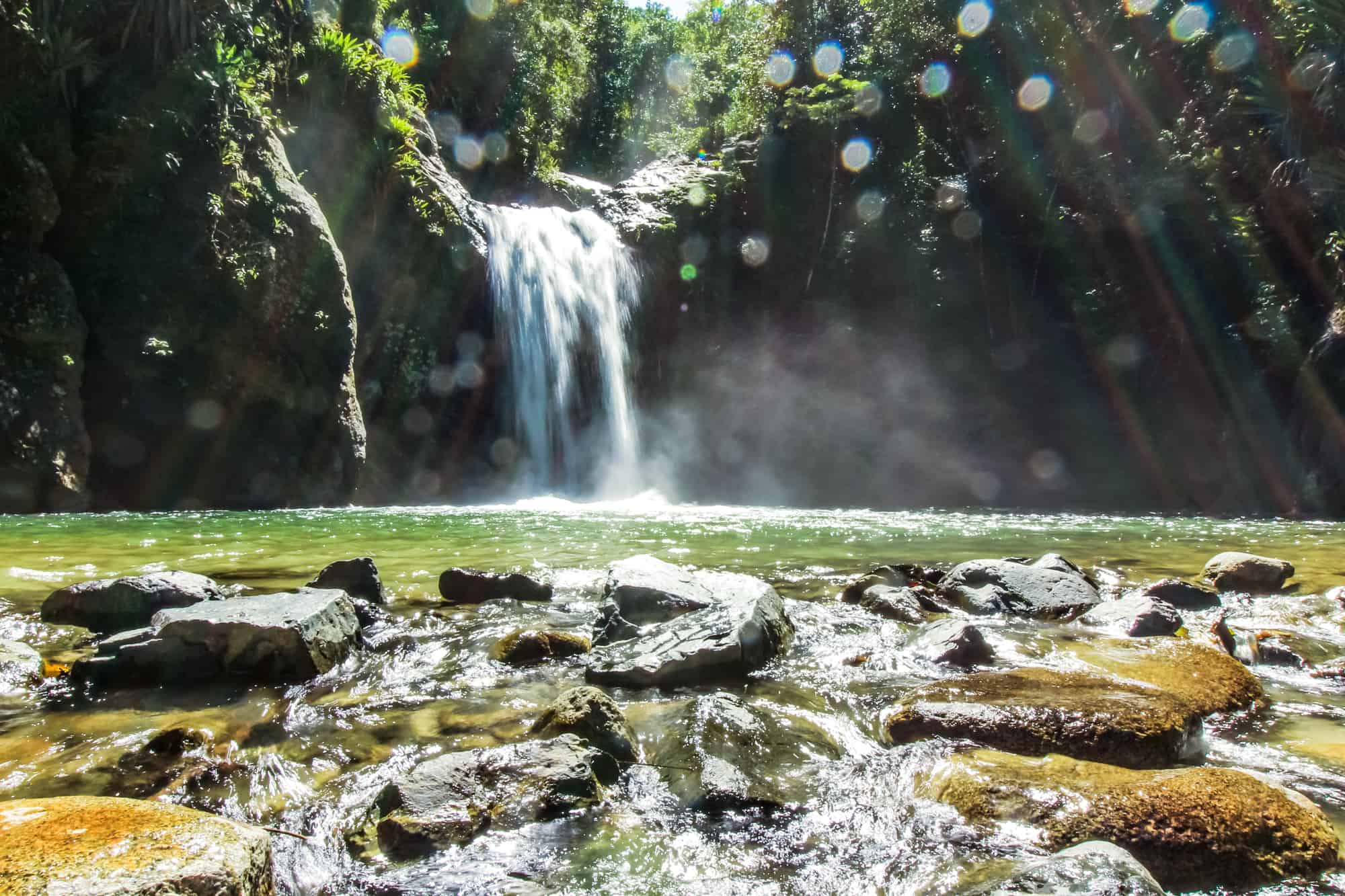 Now the bathing fun could start: You can either swim in the water in front of the waterfall or walk up in the woods and jump down.

To get to this waterfall, you can either walk or ride a horse. I guess, a car or a MotoConcho (that’s what they call a moto taxi here), would work as well since the waterfall is close to a street. I decided to go on a nice horseback ride. Unfortunately we were riding mostly on normal streets – at least on our way there. On our way back we went more through the woods and over meadows. But I can’t really recommend to take a horse. This was a part through nature: 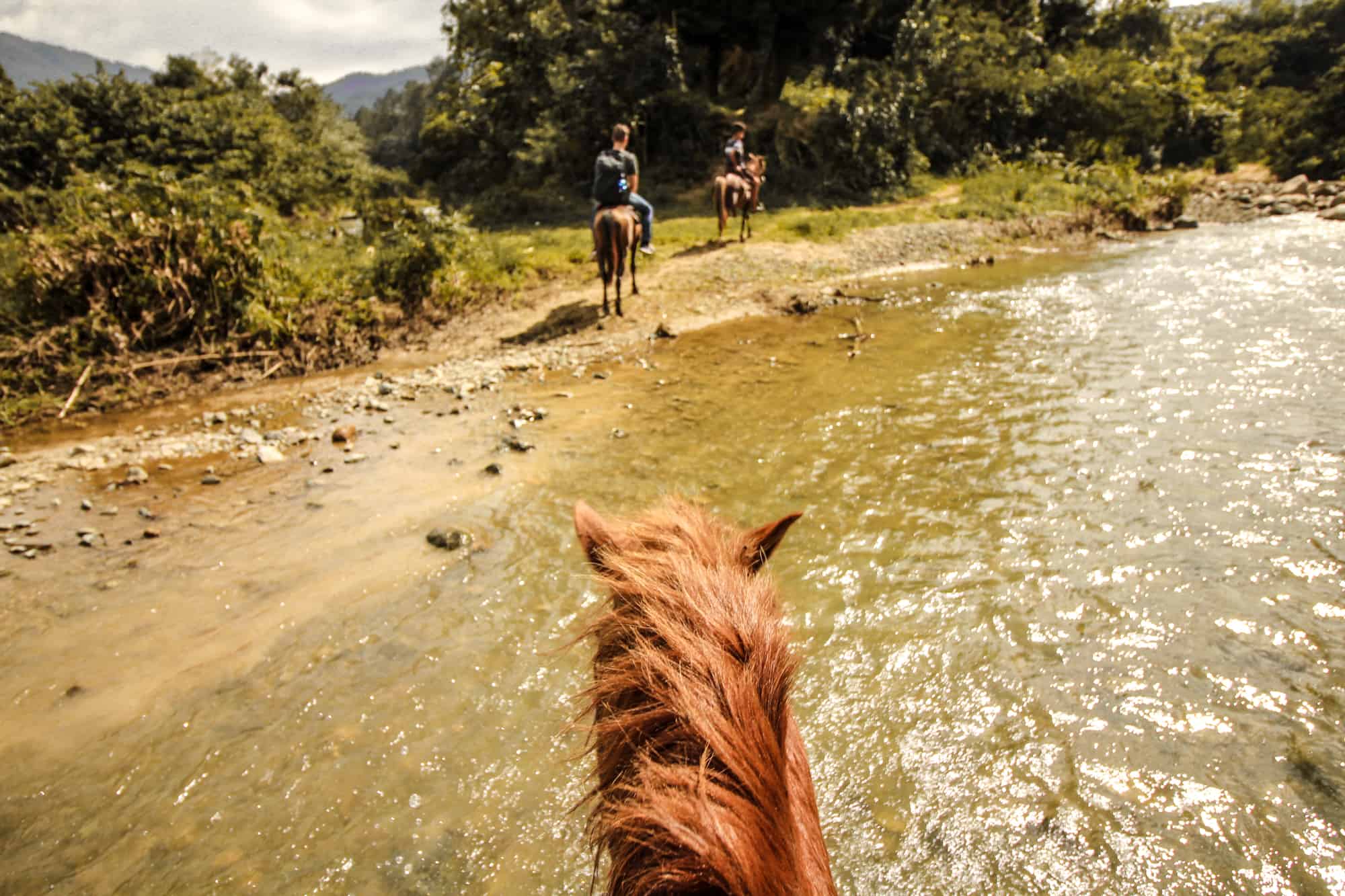 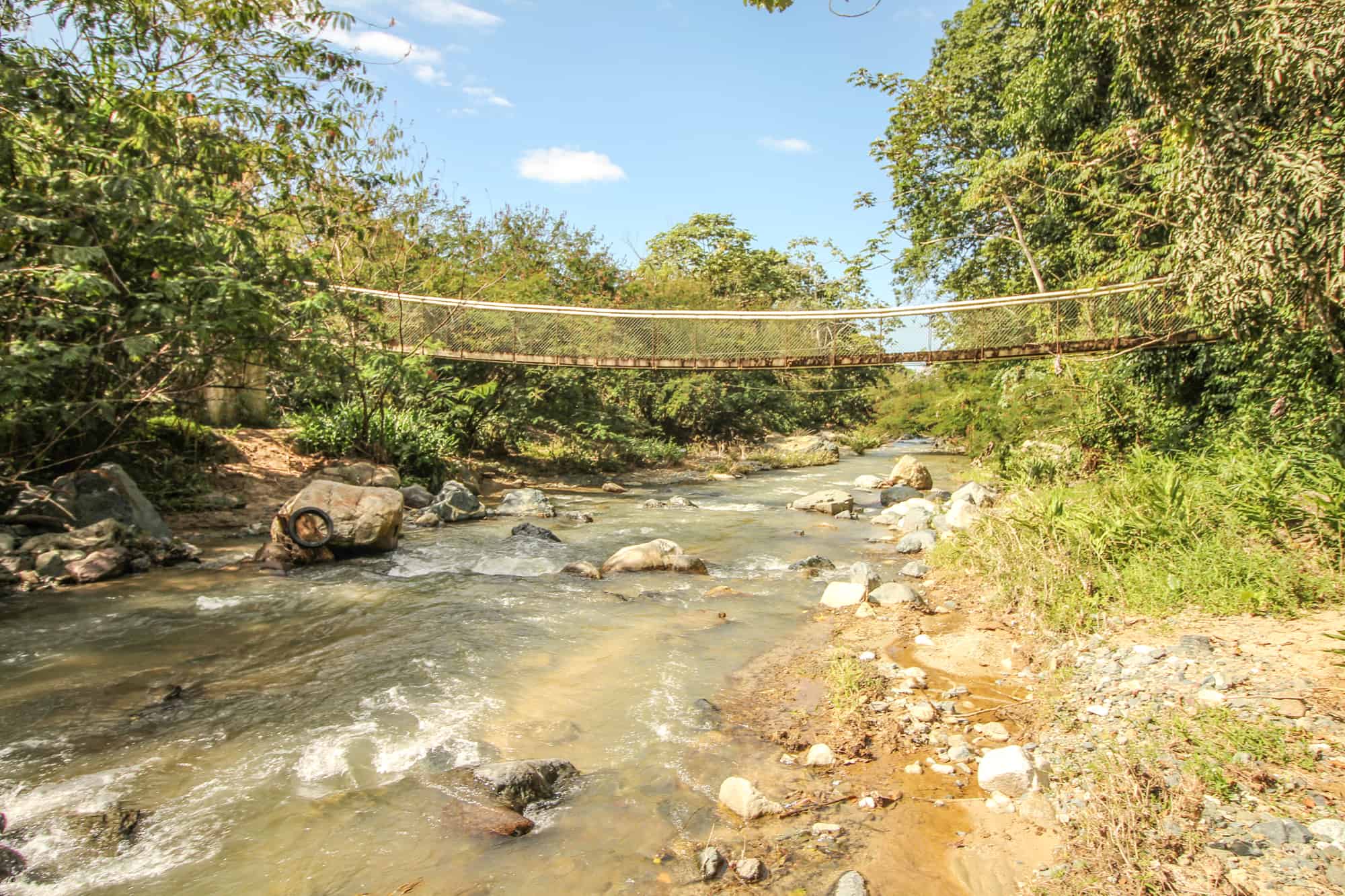 Another sad thing was that the horses weren’t really in good conditions. You could tell that they weren’t taken care of and they were dirty. I almost wanted to cancel the whole trip, but I was so looking forward to it the days before that I couldn’t. So if you go to Jarabacoa and want to do a horseback riding tour, my advice is to talk to the people and ask to see the horses before you book. I am sure you will find somebody who is treating the horses right and in general I like to support the local community . 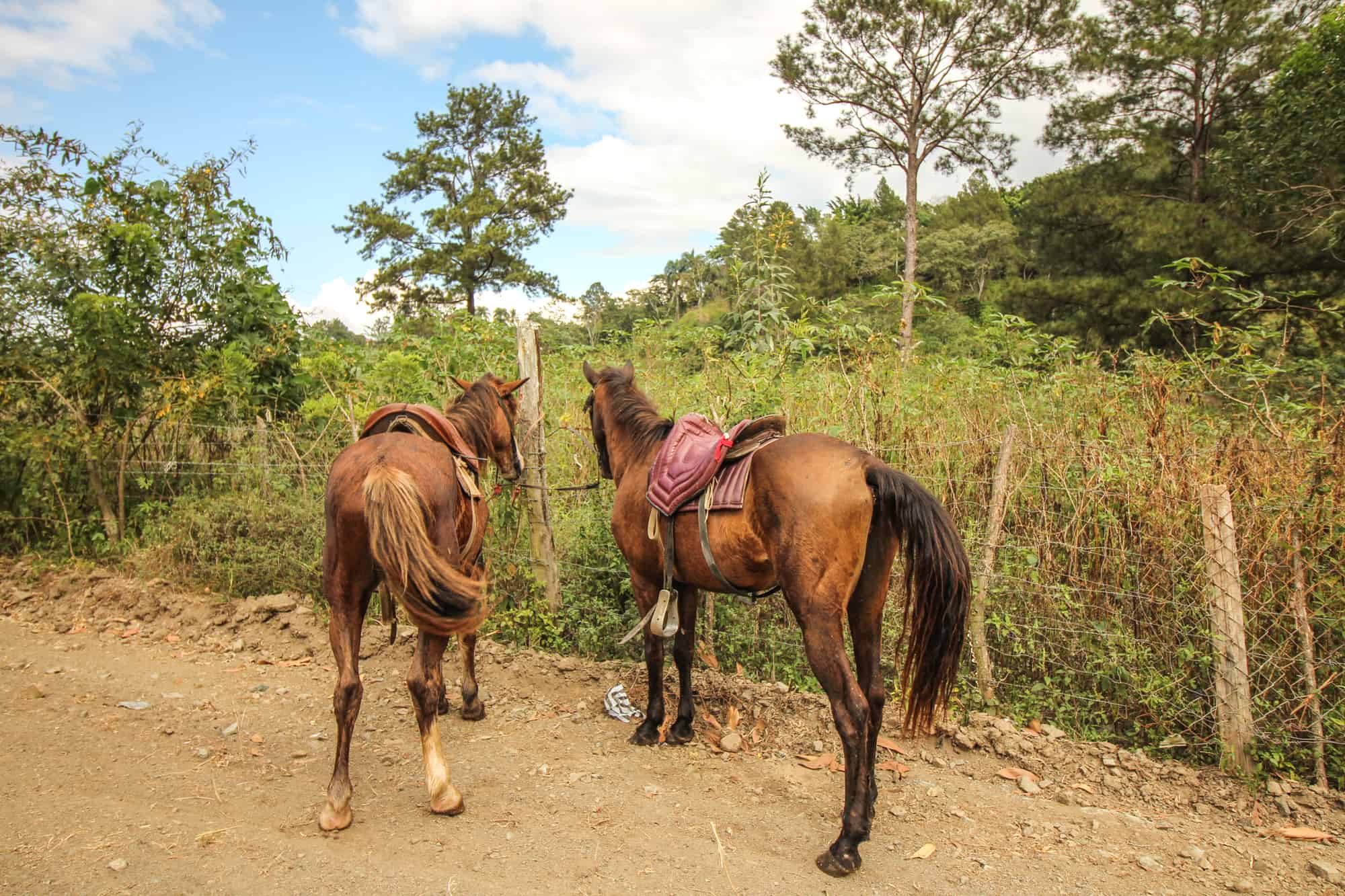 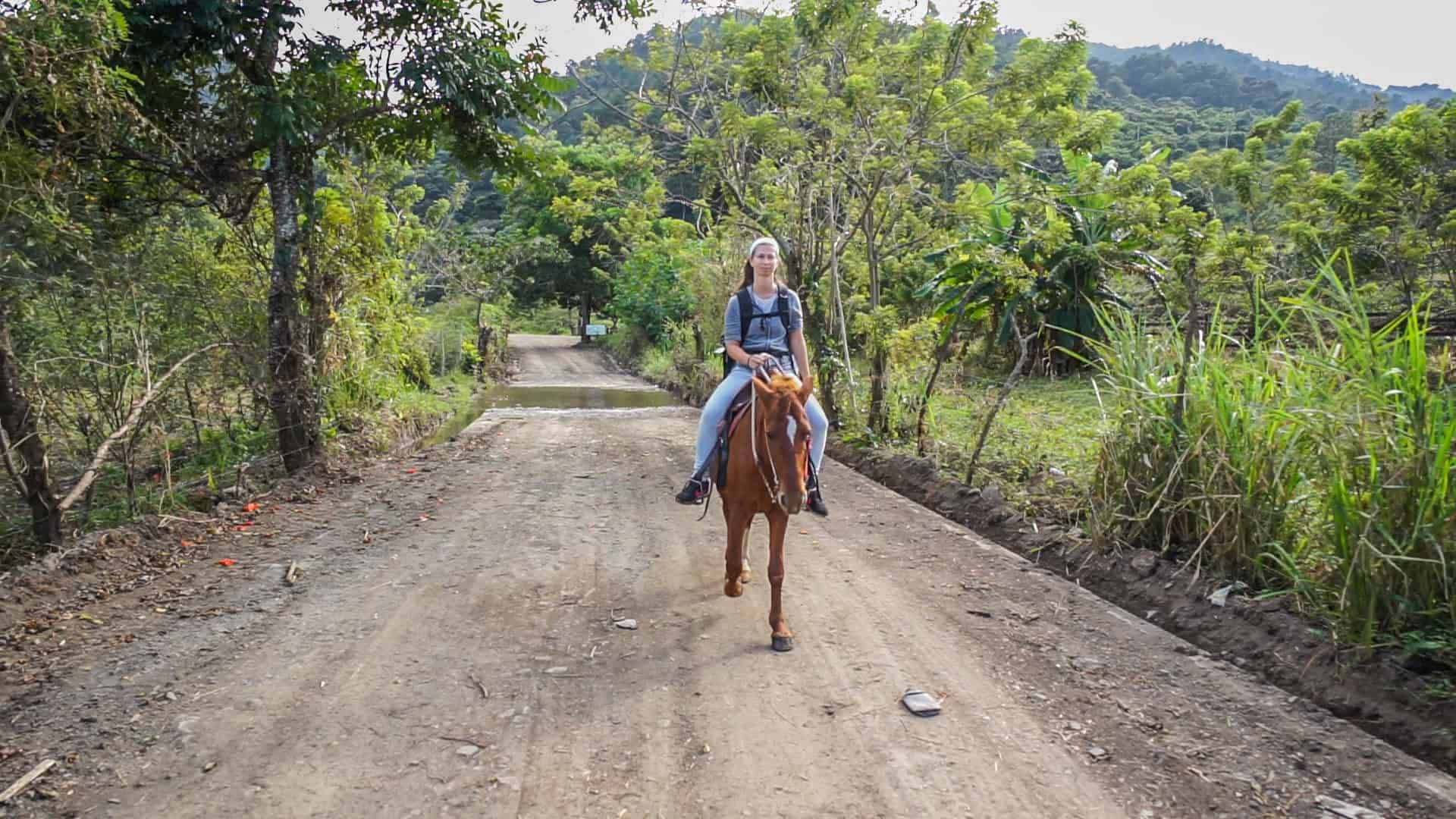 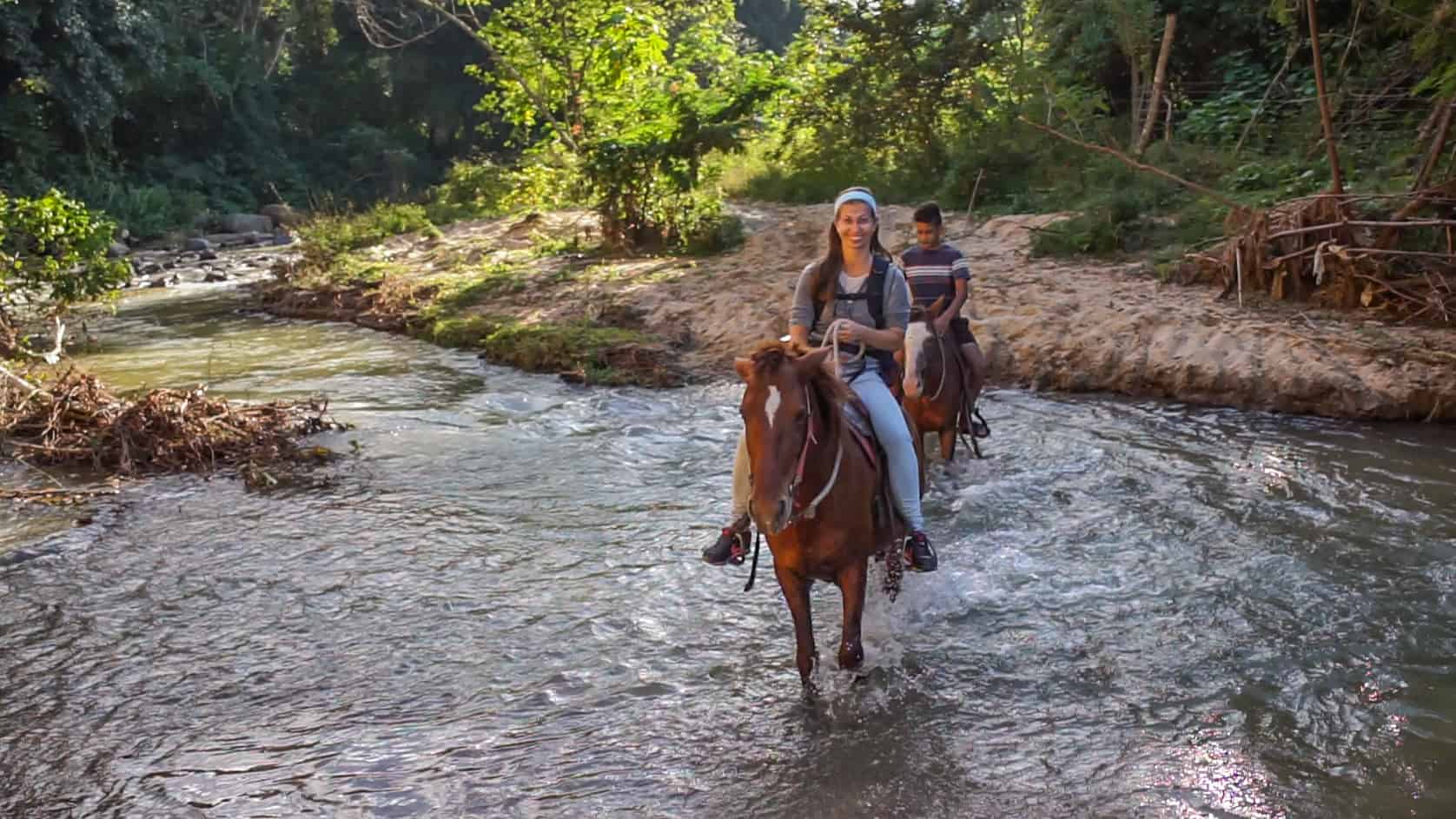 But let’s talk about the waterfall:

Baiguate is similar in height to the Secret Waterfall, but easier to reach – you only need walk over a small path and then down the stairs. From the path you can already get an impression of how it will look like. 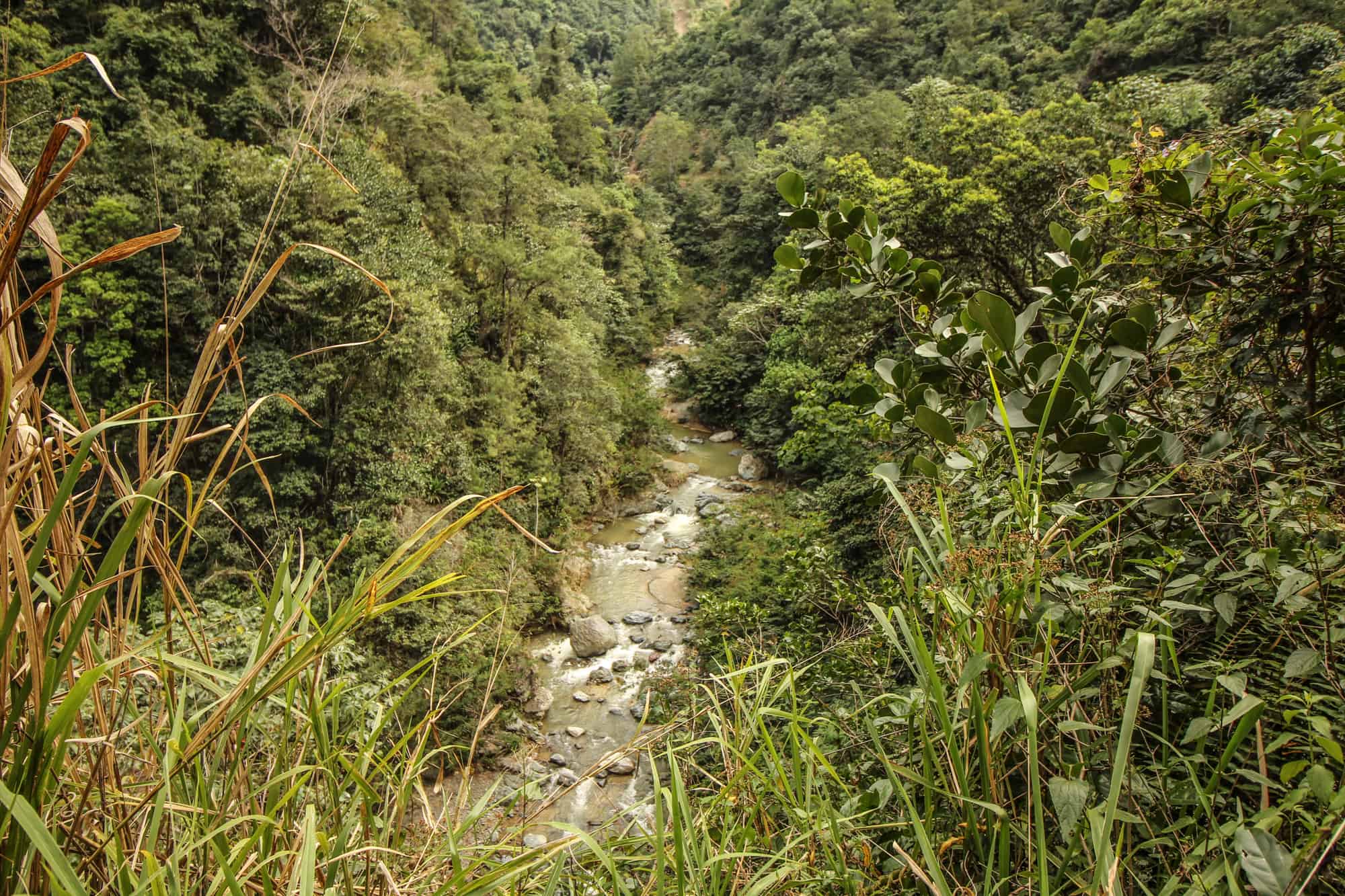 The water is icy cold. 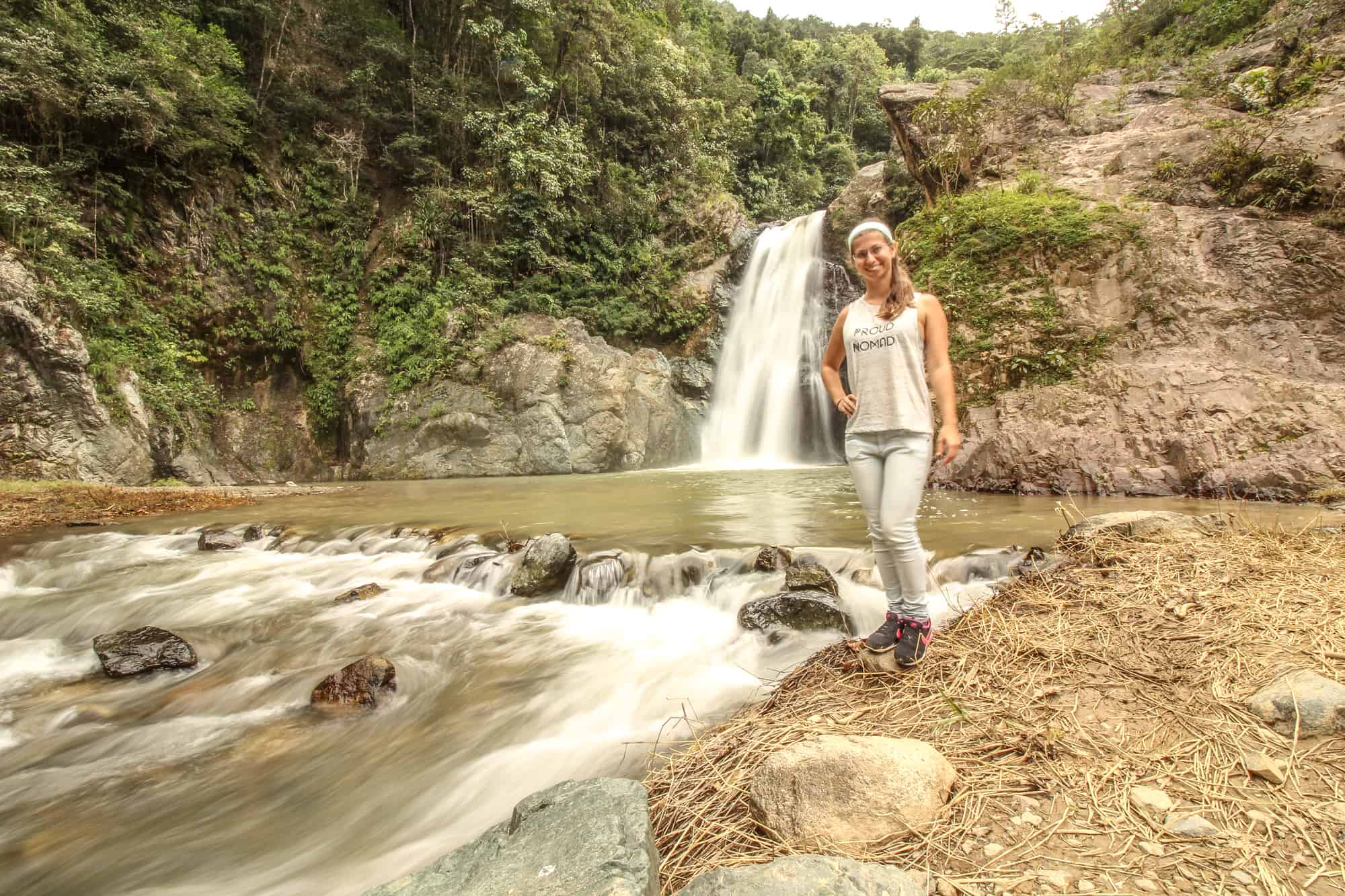 But it was super nice and I spent around in hour there taking photos and relaxing.

Then we did what I was looking forward to for weeks. Because some friends have been to Jarabacoa when I was still in Cabarete. They told me about the paragliding. I had my first paragliding adventure when I was in Lanzarote and immediately fell in love with being in the air. Now it was time for my second flight!

The people from Flying Tony came to pick me up in the hostel and with five other people they drove us on a mountain. The view was spectacular – even without being in the air! 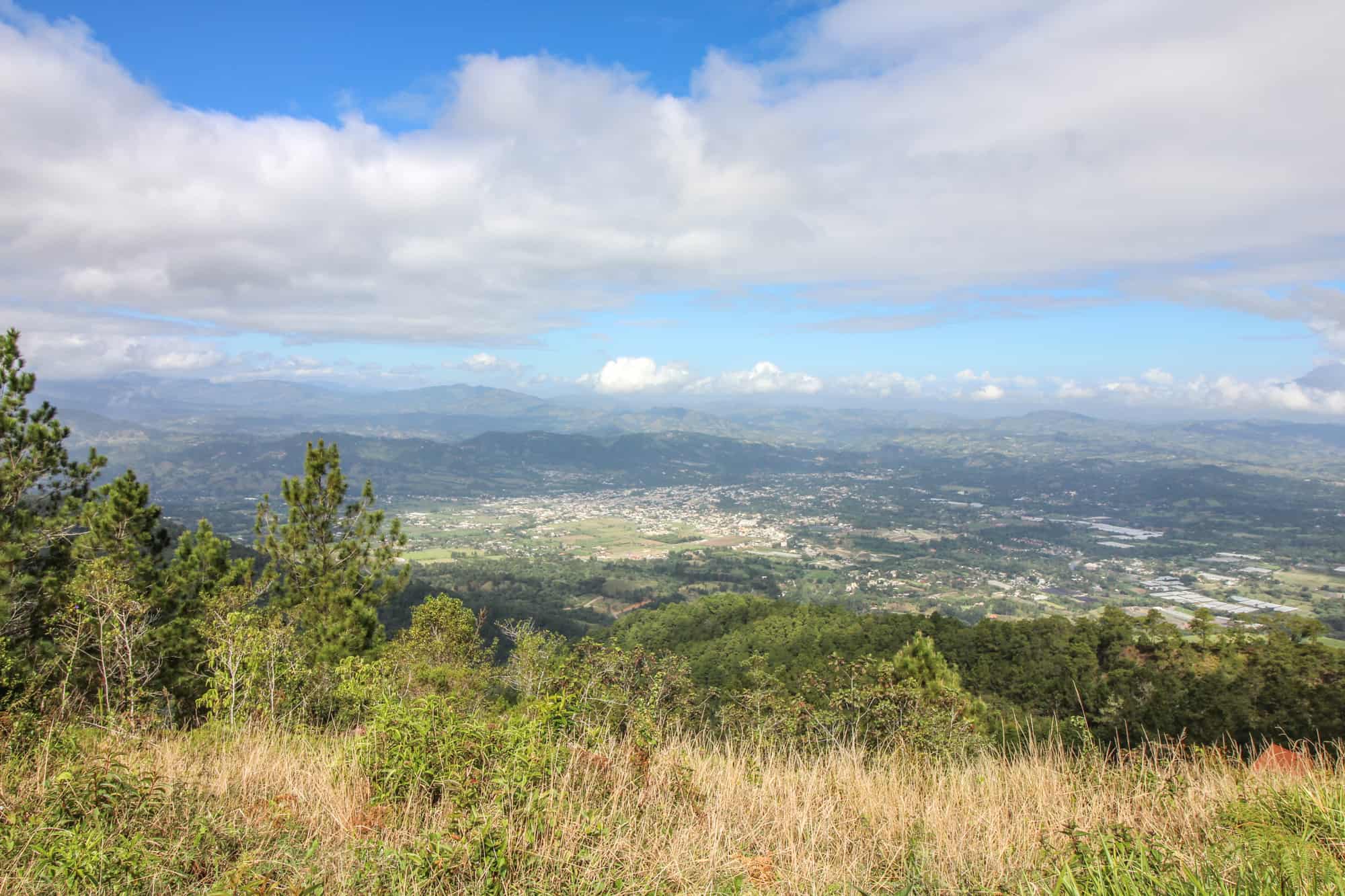 After some preparations the moment had come… “Run!” said the pilot behind me and I couldn’t even take a step when we were already in the air.

I was the first to start so I could admire the beautiful landscapes and watch the others start. It was incredible… 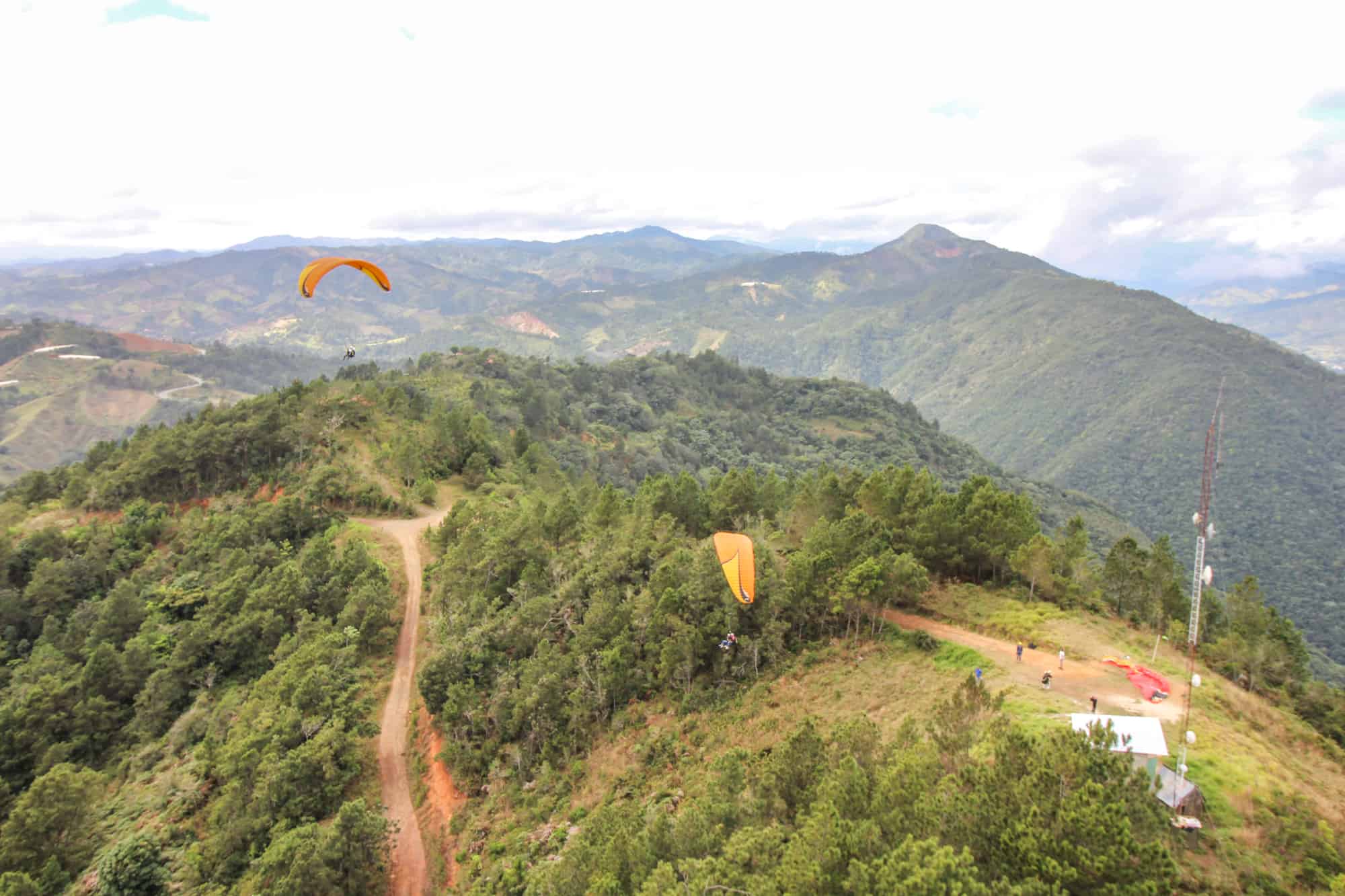 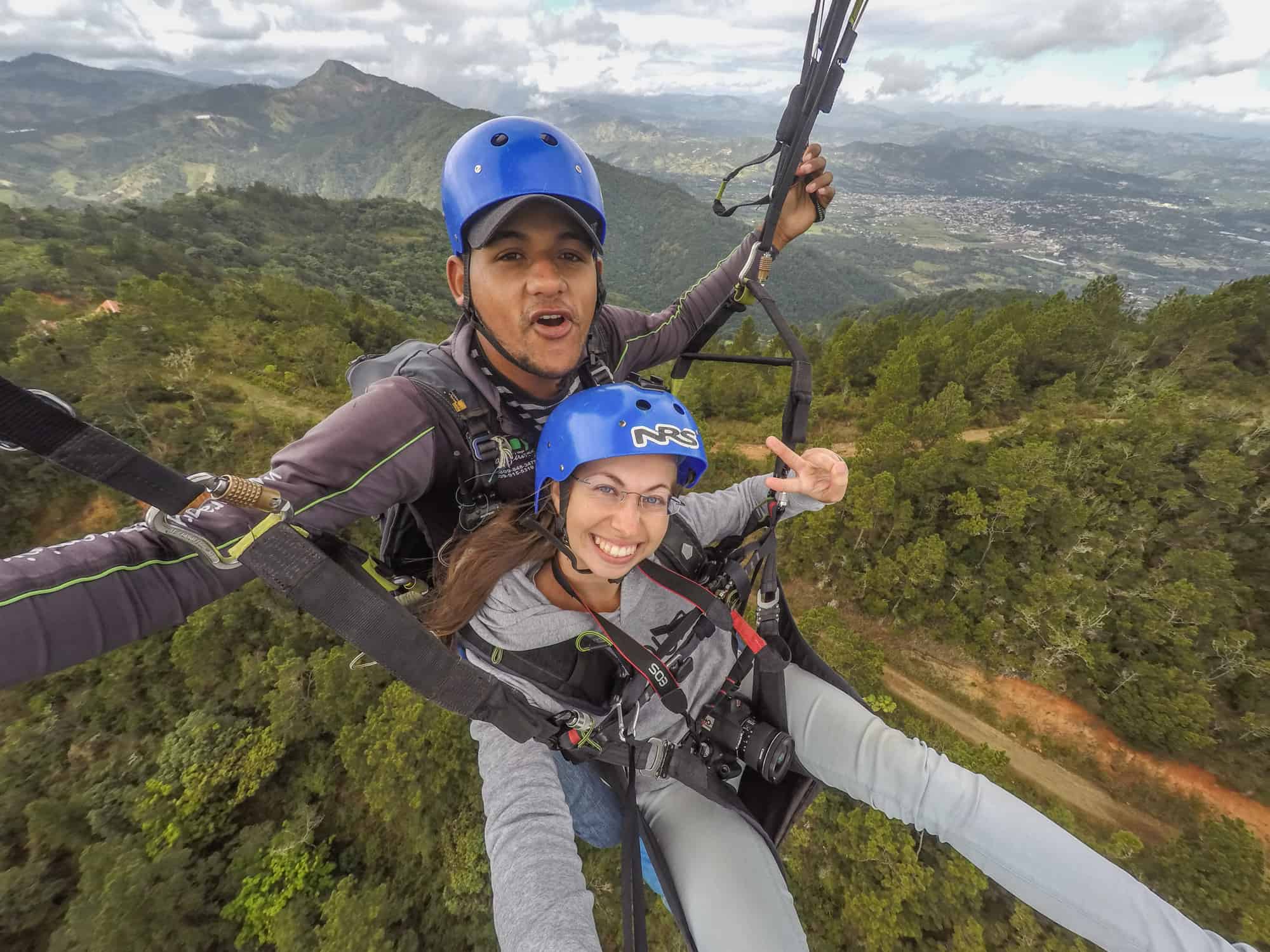 We were flying in circle over the mountain for about 30 minutes before we went down to land. 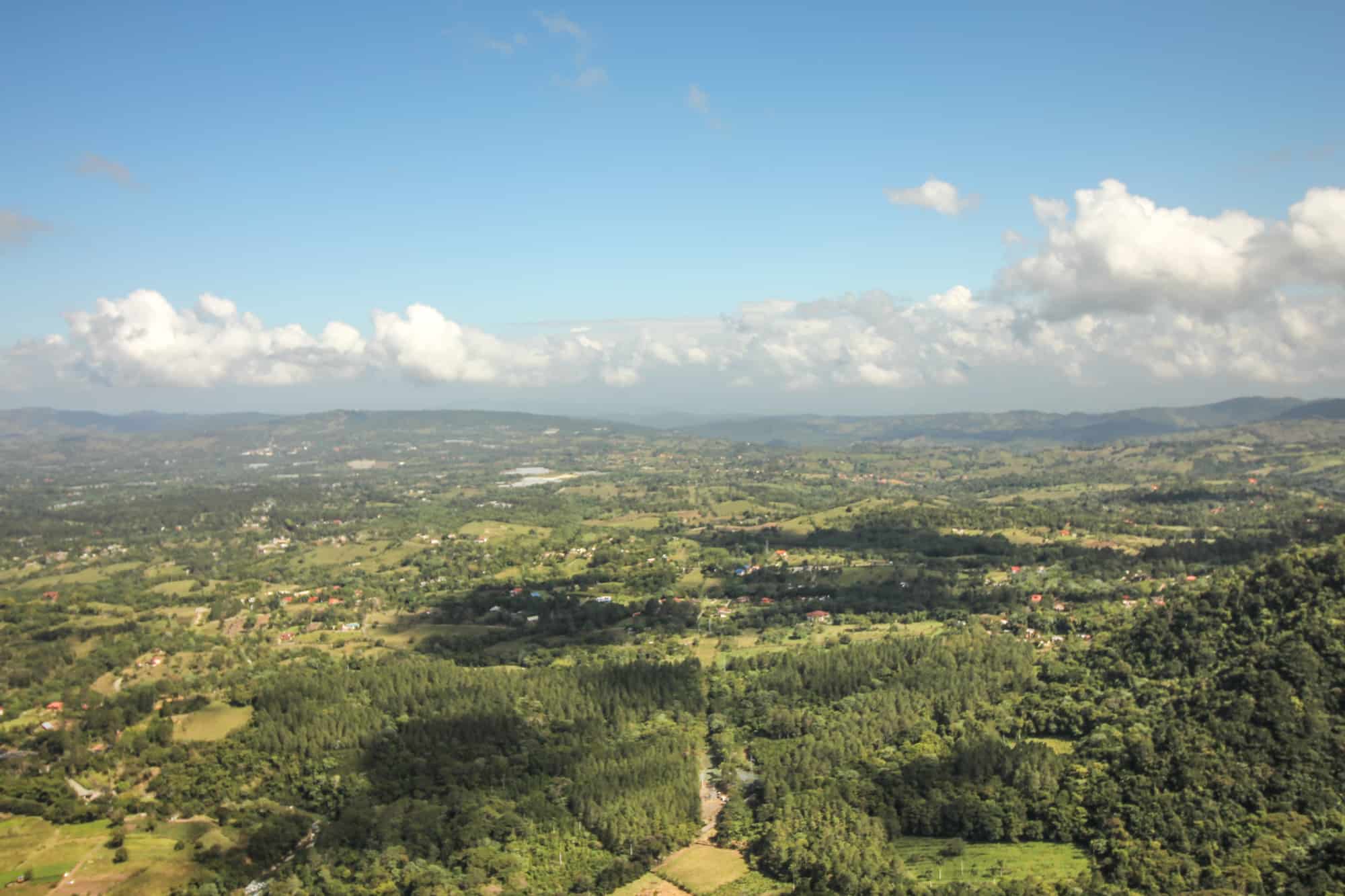 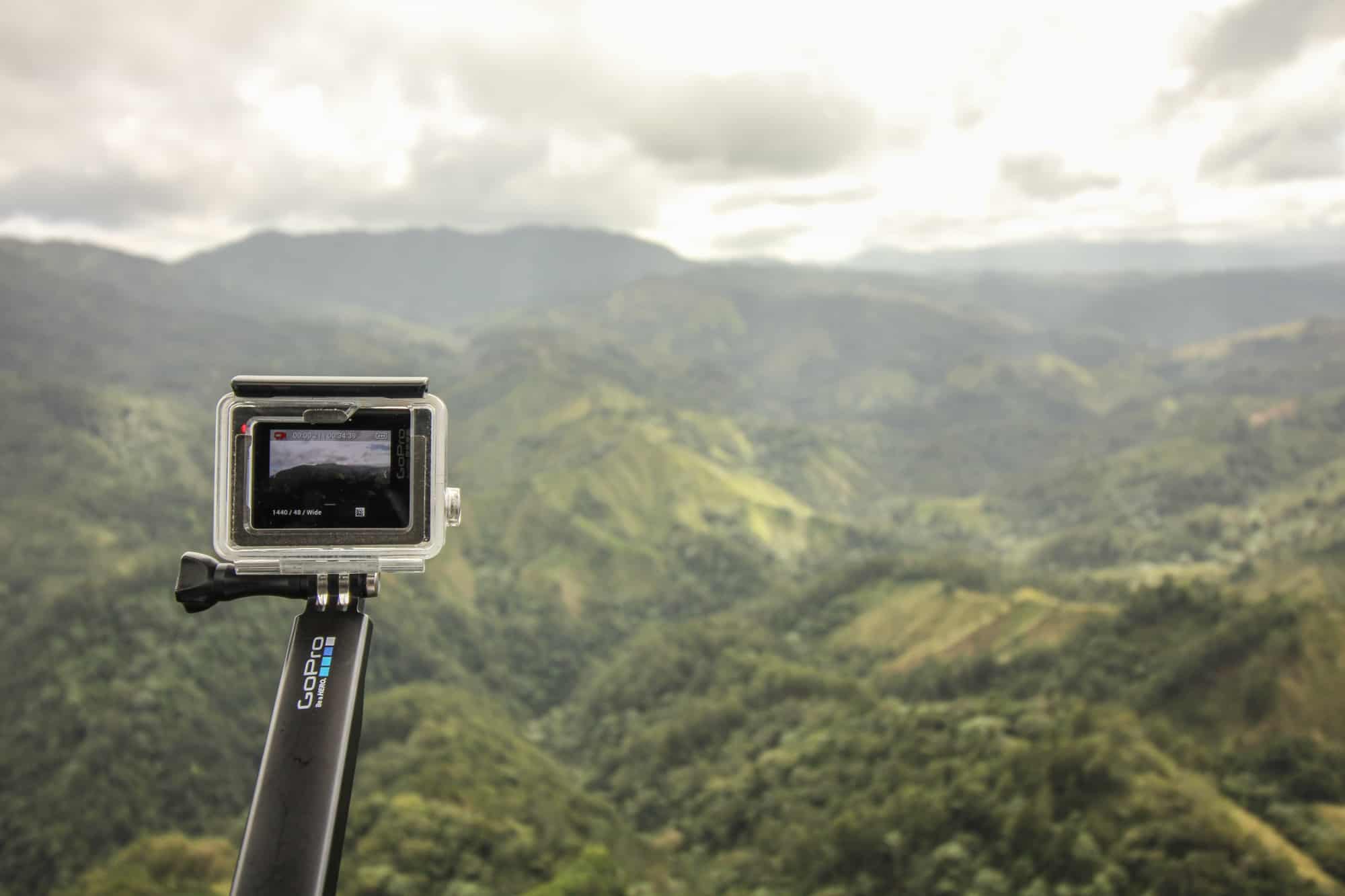 On our way down we passed a beautiful waterfall. 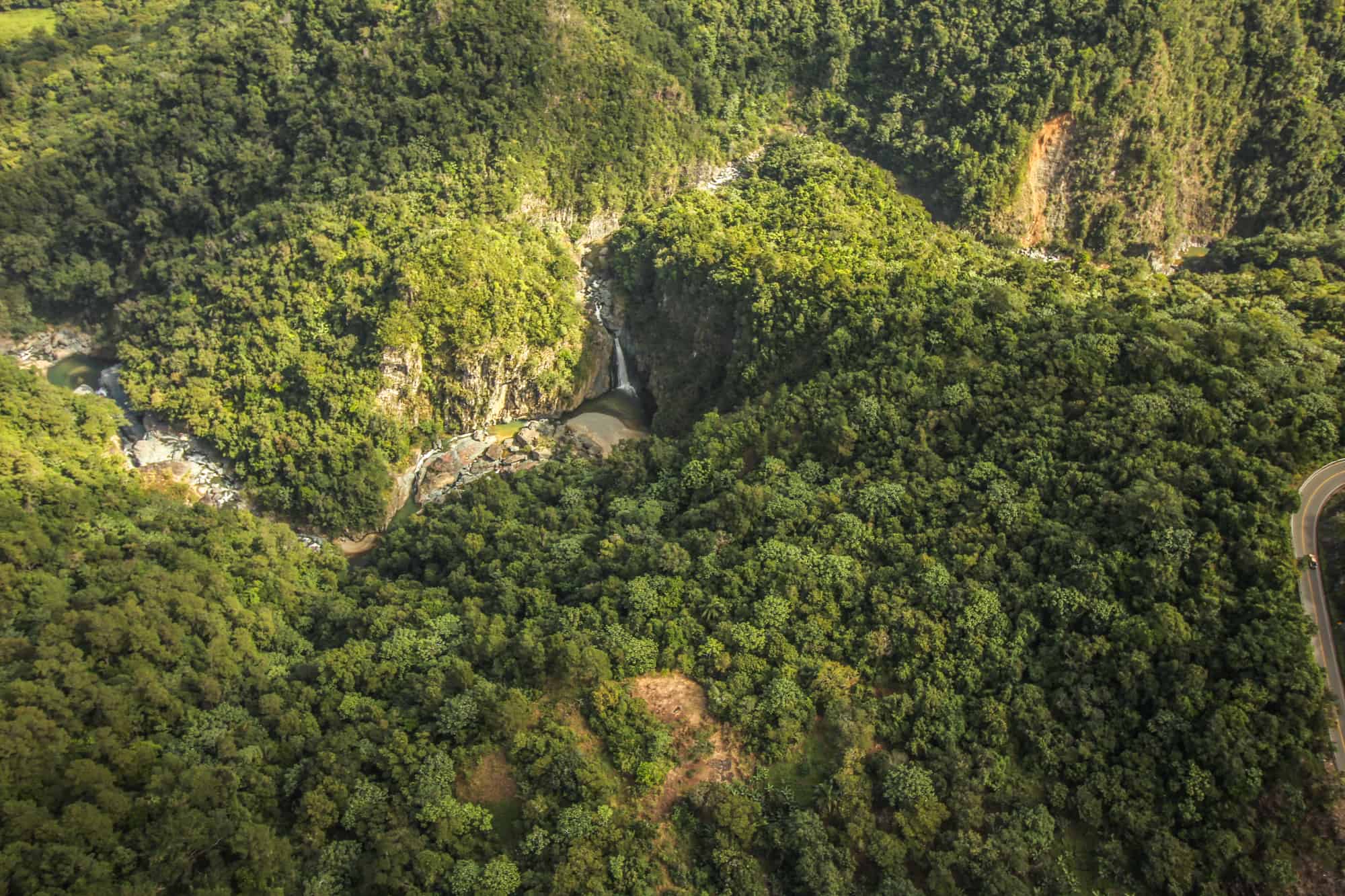 I really hope it doesn’t take one year again until my next flight.

For me, Jarabacoa was a real oasis of calmness that gave me the possibility to take a step back and enjoy nature.

You shouldn’t miss this town if you are going to the Dominican Republic!

PS: This blog post was supported by the Jarabacoa Mountain Hostel, that invited me to stay in this beautiful private room. The tours have been supported by Jarabacoa Eco Adventures and Flying Tony. Again: Thanks a lot! My opinion is my own and has not been influenced by the collaboration.

PPS: You want to see the video about the trip? Check it out now! Chris Spiegl did some amazing shots of our tours. I feel blessed that I am a part of it: