Dune Bashing and Sandboarding in Dubai: The Thrill in the UAE

Dune Bashing and Sandboarding in Dubai

Dune Bashing and Sandboarding in Dubai were very high on my to-do list. Dubai is fast and thrilling Emirate. Of course, sometimes you have to do something that is pumping up your adrenalin. So I decided to do this trip to the desert with GetYourGuide. They don’t have partners only for dune bashing und sandboarding in Dubai, but also other kinds of trips and tickets. I would have loved to do a tour with camel through the desert, but unfortunately there was no time for that before I left for Bali.

They came to pick me up around 8 AM with a light blue and white jeep. It took us almost an hour to get to the area in the desert, where they do dune bashing and sandboarding.

Dune Bashing – What is that?

During the so-called “dune bashing” you are driving up and down the dunes pretty high-speed. Sometimes you are sliding along the sand in the 4×4 car. The windows must remain closed, because sand flies just around the vehicle.

When we arrived to the meeting points where other guides were already waiting, the guides had to let pressure off the tires. Otherwise, the cars get stuck in the sand. After 10 minutes we started!

Tire prints in and around the dunes indicate that this area is quite often chosen for dune bashing. We made our way up the dunes when another German guy suddenly said, “I thought that was more exciting!” Since I had already experienced dune bashing in Jericoacoara, Brazil, I told him to wait. We followed the tire tracks until we were suddenly high up on a dune and it was like we could see the whole desert. 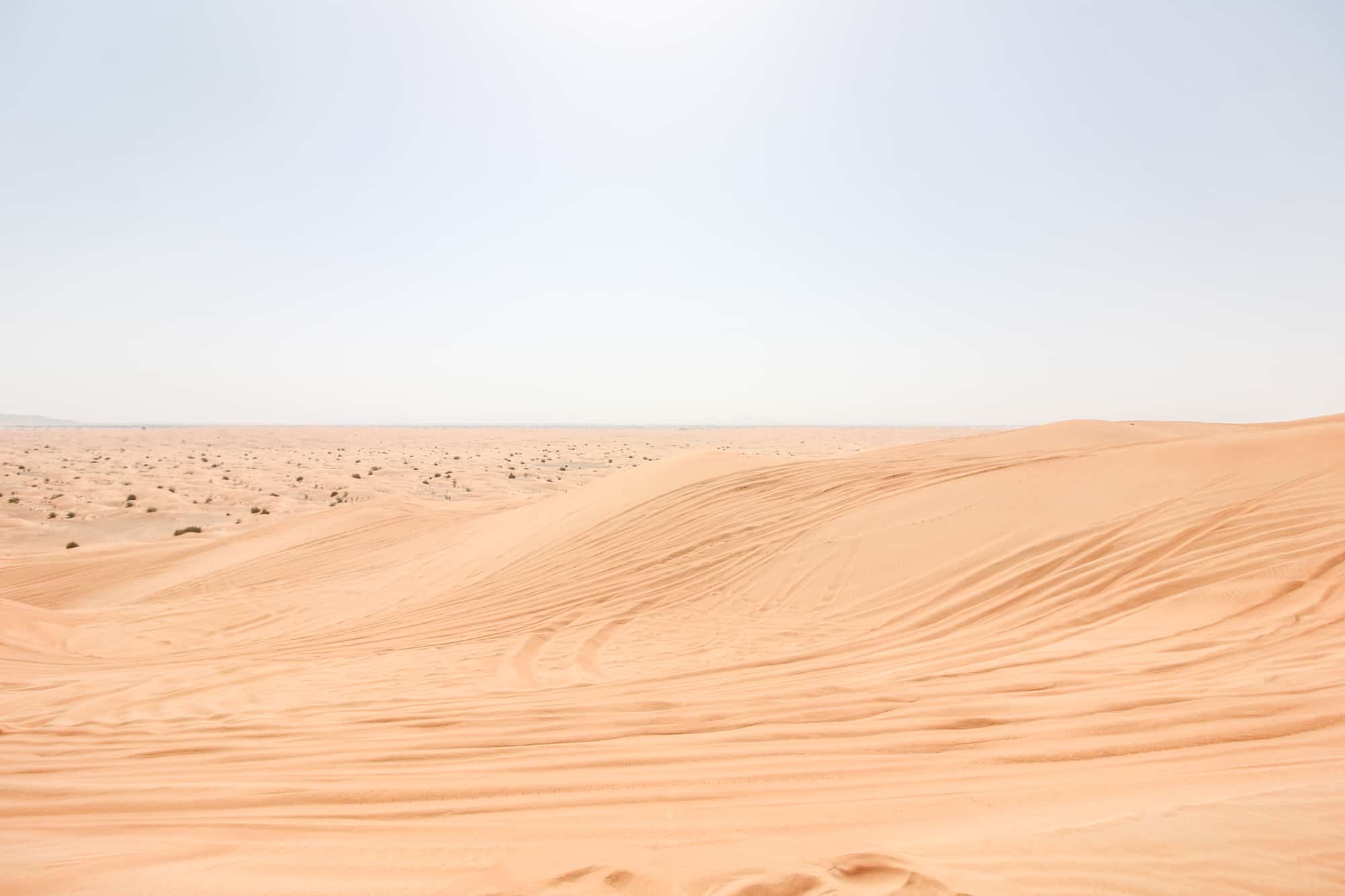 However, we did not have a lot of time to enjoy the sight. In the next moment, we were speeding into the depths. A rapid ride up and down began and for 20 minutes I could hardly say a word, because my breath stopped. All those beautiful sights of the desert, every time we arrived at the peak of a dune, will always stay in my memory.

At some point we stopped at a place where two cars were already waiting.

Our guide first wrapped a scarf around his head to protect against the burning sun. I did the same – in Dubai you should always have a scarf with you as a woman anyway! Then he took two boards out of the trunk and we went to the other tourists who had already started the fun: On the boards (looking like snowboards) they slid down the dune – either sitting or standing.

They put some wax on the board to make it glide on the sand. The other guys from my car were too shy and did not dare to try it. Since I had already done sandboarding in the Atacama desert, I wasn’t afraid. 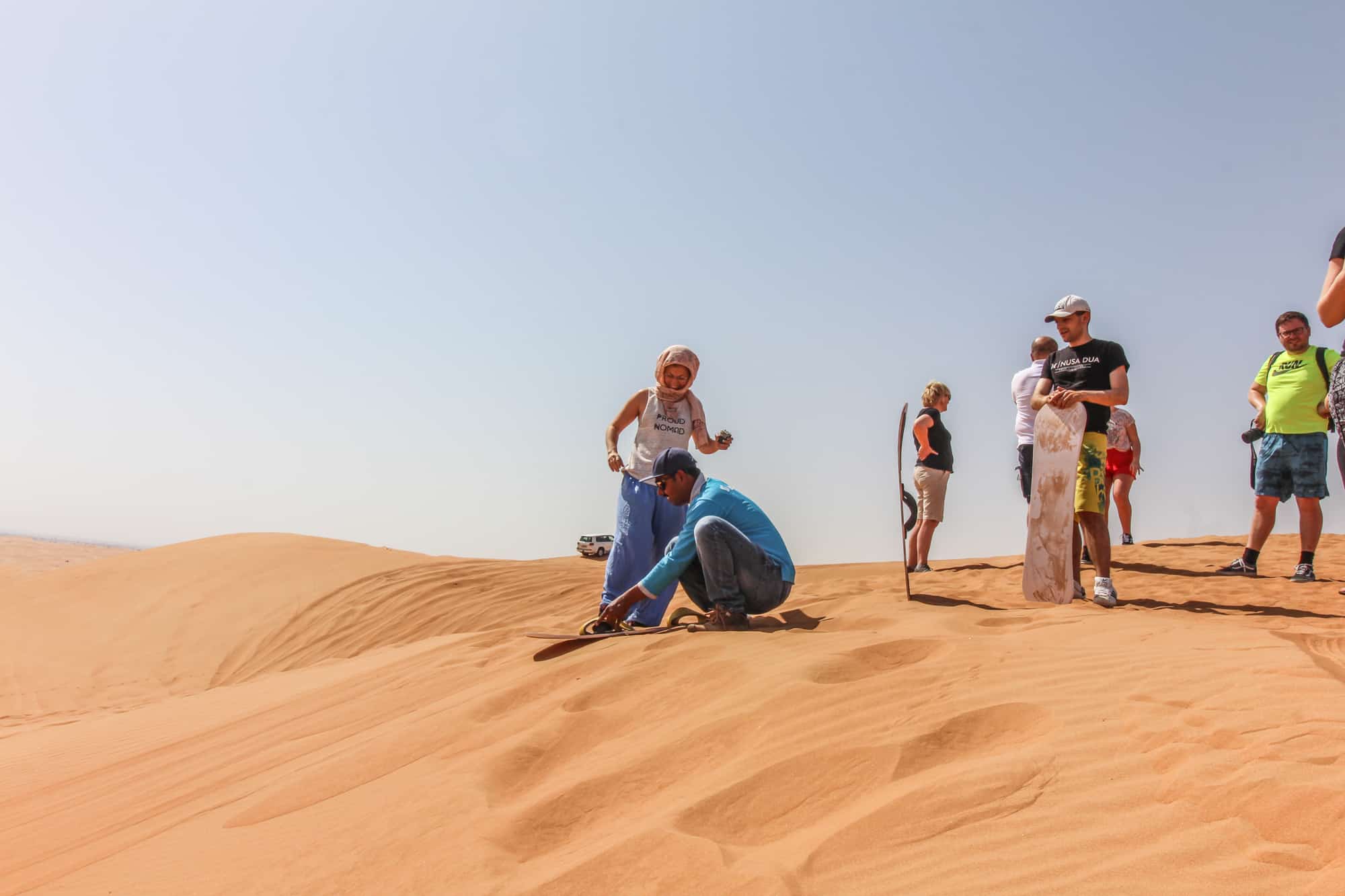 They tightened the straps and one of the guides went in position to take photos and off I went: With my GoPro in the right hand I slid down the dune! 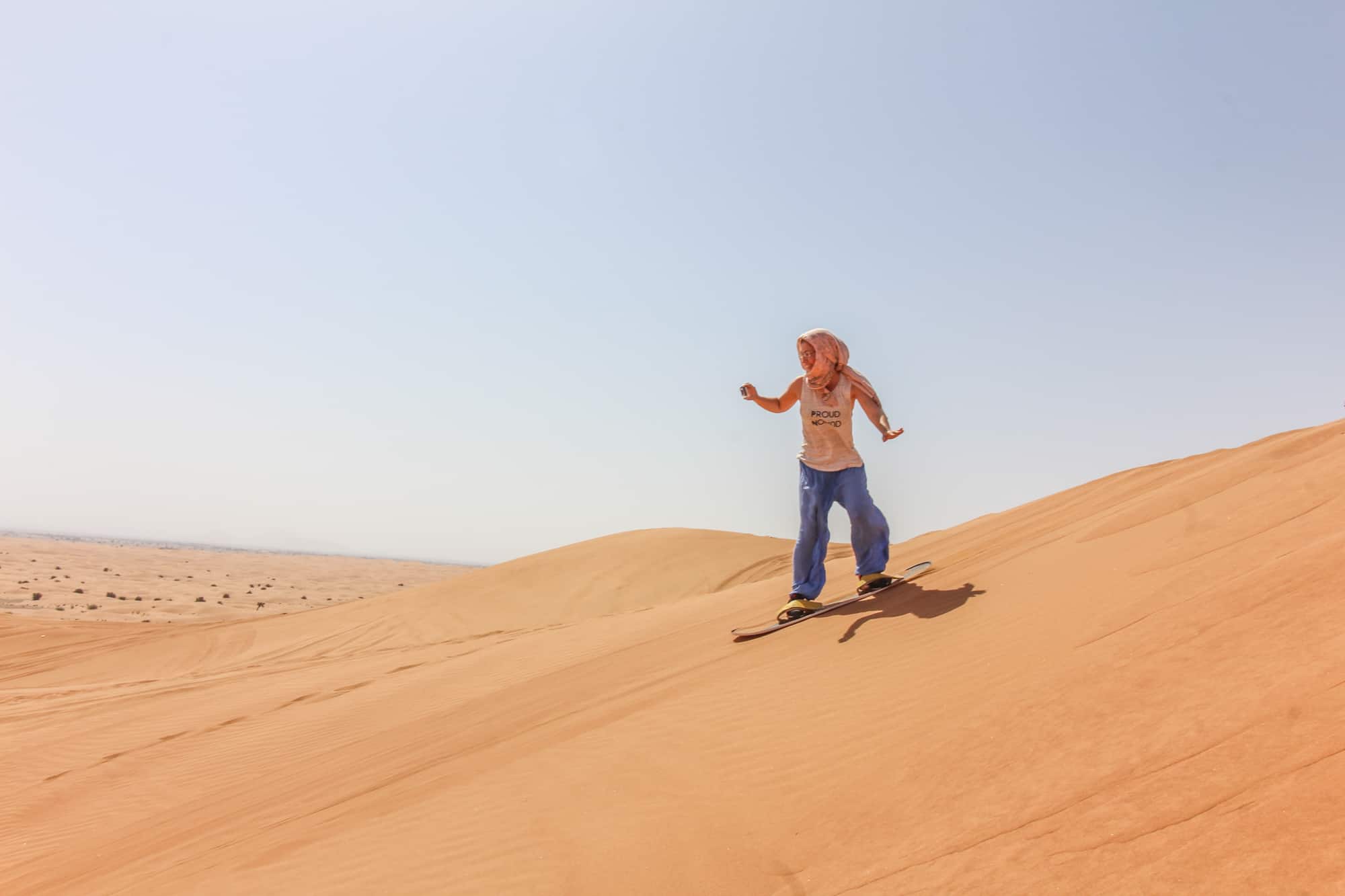 The dunes in the Chilean Valle de la Muerte were much higher and the descent much longer. But here was the advantage that the way up was shorter. I drove down a few times and walked up the dune again – sweating in the heat.

Then we did a photo session, because we couldn’t leave without having some beautiful picutres to remember this morning. 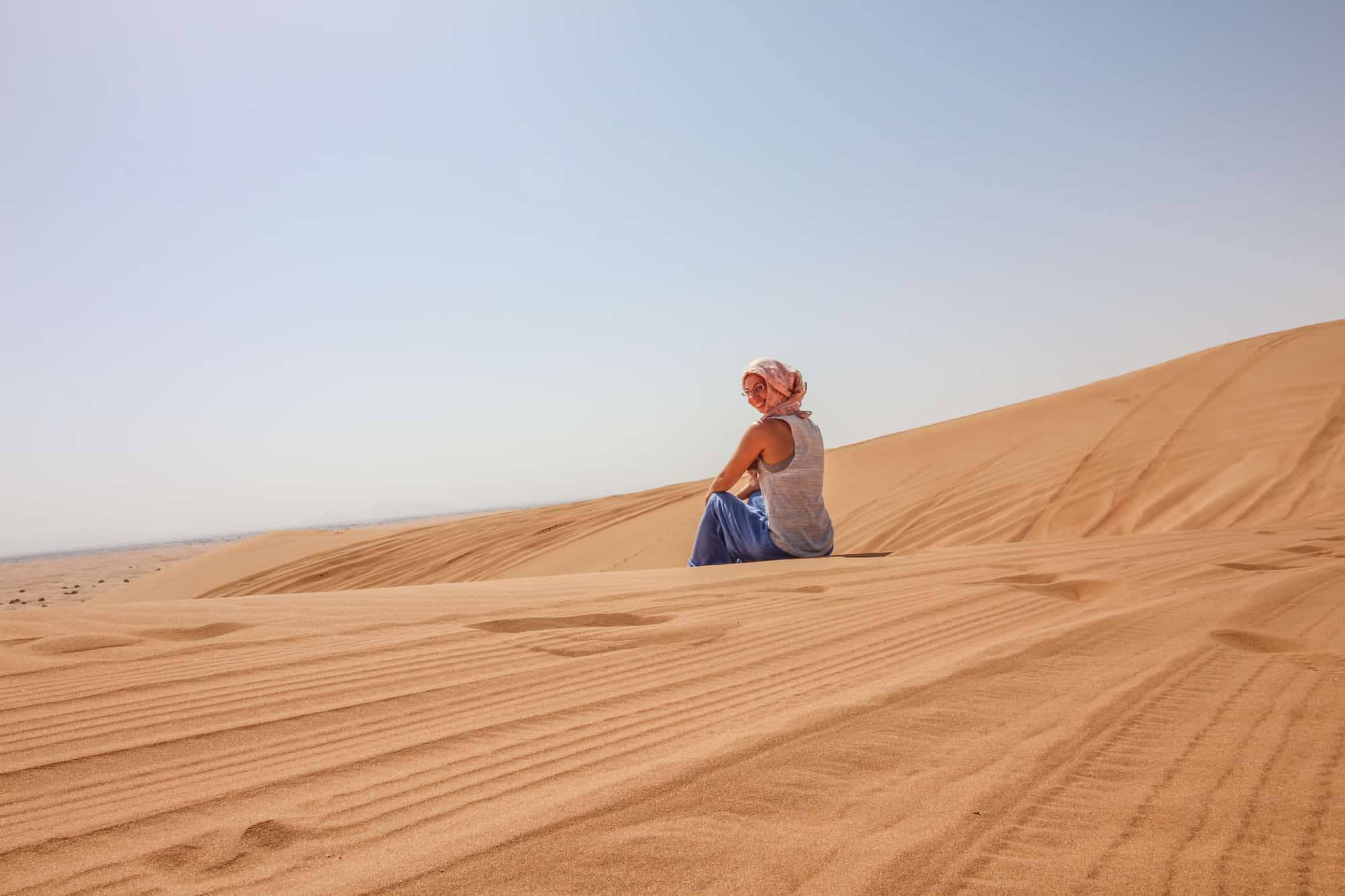 After about half an hour in the burning sun and the dry heat of the desert, we packed the boards back into the trunk and had another round of dune bashing on the way back.

Another stop was used to put the pressure back on the tires – and to get rid of all the sand. On the way back to Dubai the guide told us that people have to get a special license to become a driver for dune bashing. There are no lessons though. They have to practice privately. It definitely sounds like an exciting job!

Have you ever done dune bashing and sandboarding in Dubai or somewhere else? Tell me about it in the comments!

PS: This blog post has been supported by GetYourGuide. I got the tour for free, but didn’t get any monetary compensation. My opinion is my own.

You’re planning your first stay in Dubai? Then get The Dubai Guide for Digital Nomads to have a smooth and easy start!

You’re searching for the perfect winter getaway for digital nomads that is not too far from Europe? Then I have a special tip for you today: DUBAI IN THE UAE! 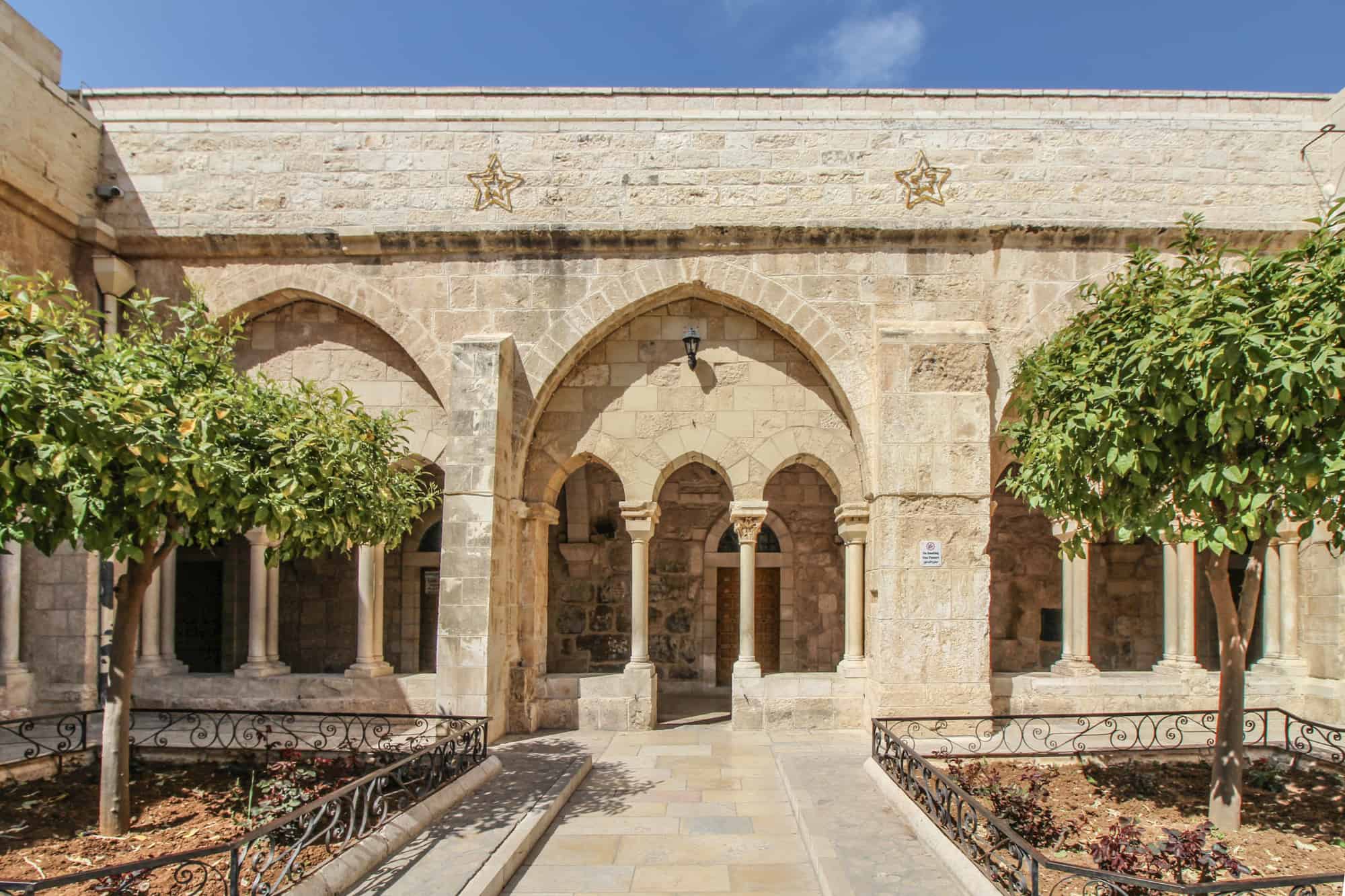 THE BEST OF WESTBANK TOUR 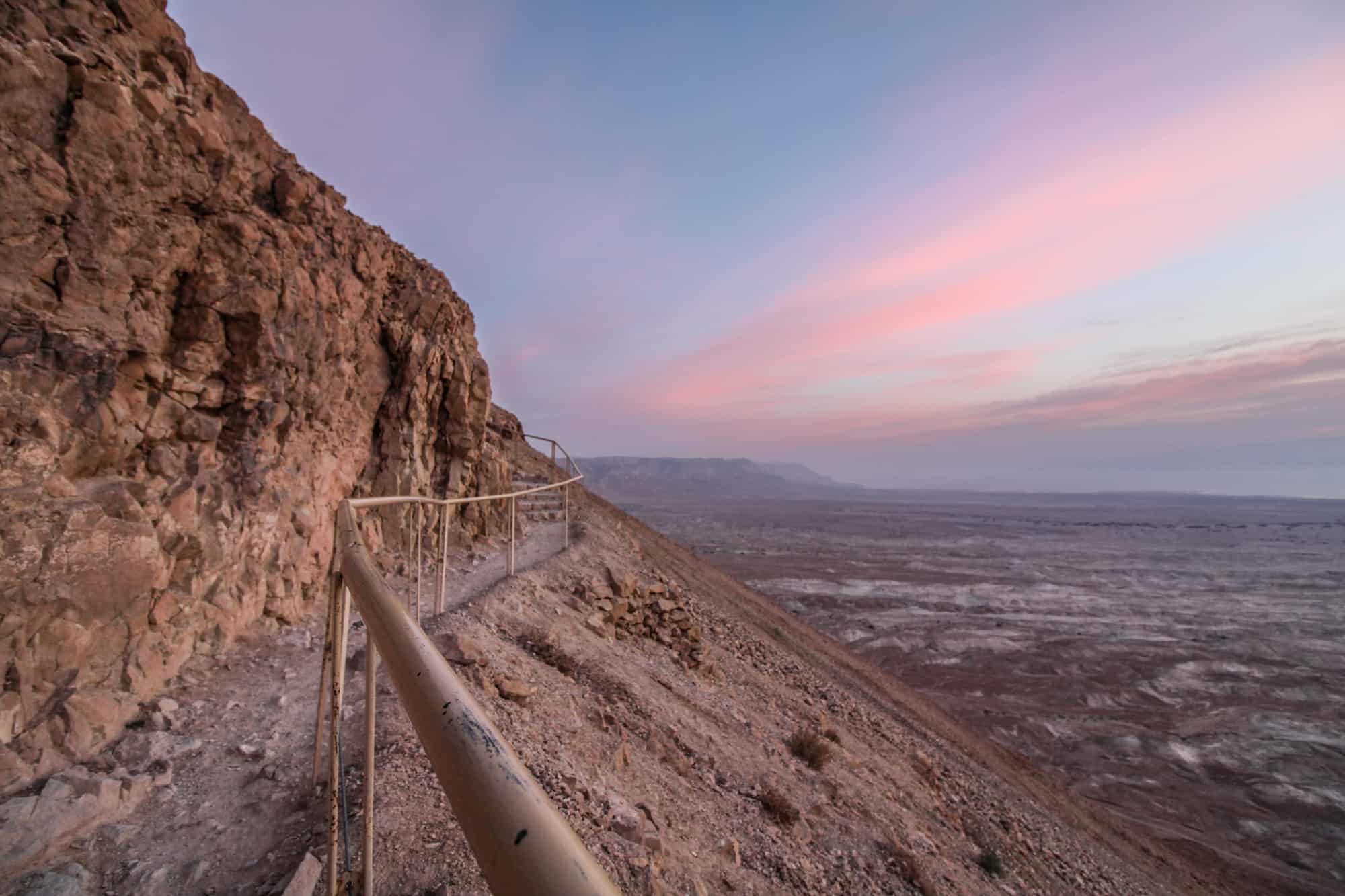 THE FORTRESS OF MASADA