Motorbike Road Trip Through Croatia – 3 Weeks on the Balkan

Motorbike Road Trip Through Croatia – 3 Weeks on the Balkan

In June, I finally went to a country that has been on my bucket list forever: Croatia! The reason for my trip was the dancing festival Summer Sensual Days in Rovinj.

The original plan was to drive to Rovinj by motorbike with a dear friend of mine. Unfortunately, I was forced to stay a few days longer in Germany, which is why I had to change the plan and fly to Treviso where my friend picked me up. Since there are relatively cheap flights with Ryanair to this airport I can recommend you taking a look at flight there when you want to travel to Croatia, too. From there, it’s easy to take a bus to the Balkan.

Die On our five-hour drive from Treviso to Rovinj, we stopped only once to check out Triest. The Italian city is super close to the Slovenian border and absolutely worth the stop. Have a gelato at Piazza d’Unita where you have the grandiose ostentatious palazzi on one side and the sea on the other for a very special experience. Have a stroll through the alleys and discover the hidden gems like a Roman theater that is simply waiting next to a pathway as if it was the most normal thing in a city. That’s how I like sightseeing.

Conclusion: It’s definitely worth a stop!

Rovinj is a real gem. The old town rises on a peninsula and the Basilica of St. Euphemia is its highest point. The idyllic alleys have their very own charm. The view of the city from the other side is also fantastic: only the sea and the old town with its red roofs.

Conclusion: A picturesque city that I would like to explore again. I’ll come back next year and hopefully stay a bit longer.

The Plitvice Lakes (Croatian Plitvička Jezera) were one of my absolute highlights. For me, the turquoise blue water in contrast to the wooden bridges is the epitome of peace. Although it was a busy day the crowds were still manageable. But I only admired the big main waterfall from afar. When I saw how many people went there and since I had already been to several much bigger waterfalls like Iguaçu and the Niagara Falls, I decided to skip the big waterfall. 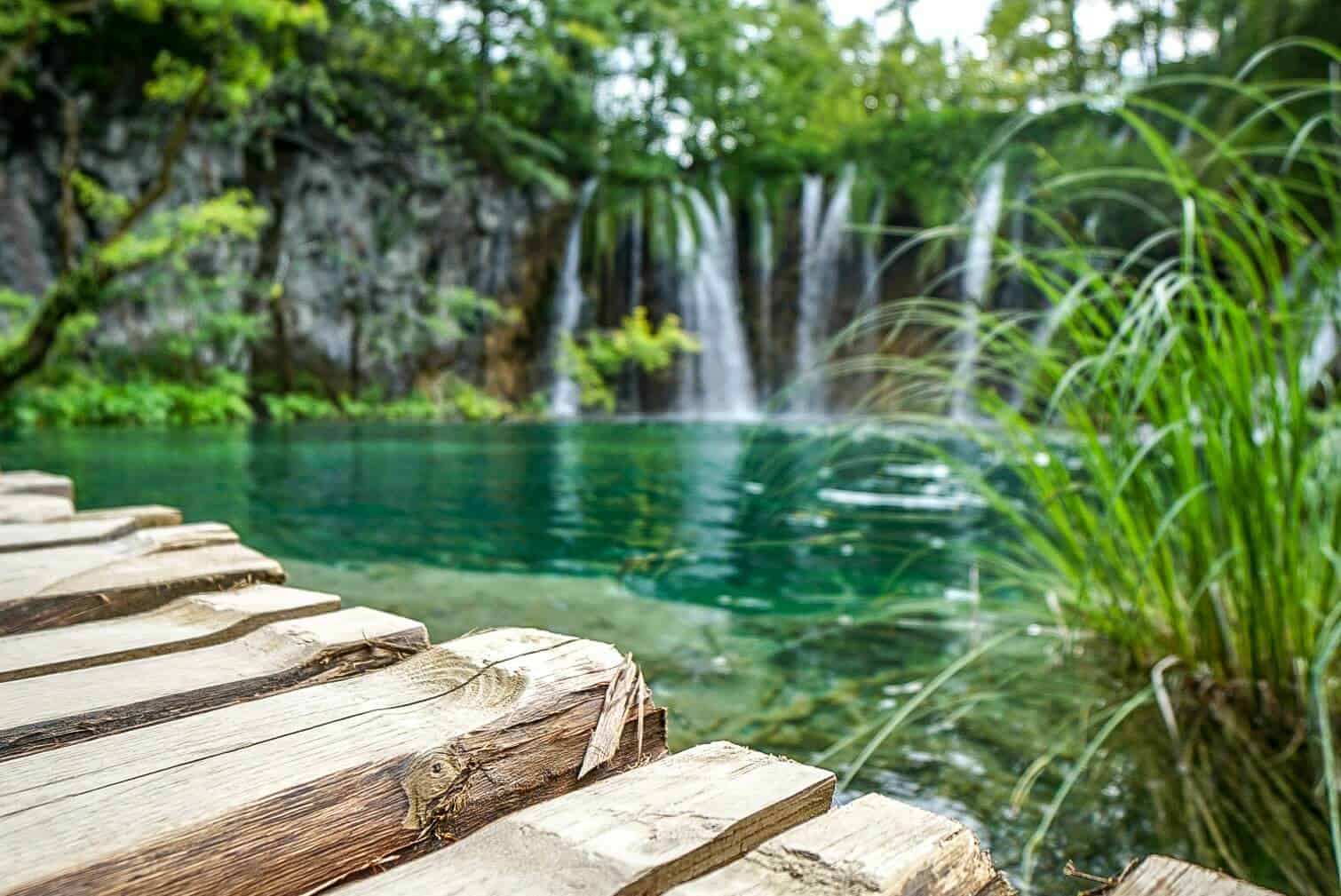 Conclusion: One of my absolute highlights!

Zadar was another highlight: We rented a boat (careful, sport boat driving licence necessary) and made a day trip. We had chosen a not so calm day for our exploration of the Kornati Islands and got some splashes of water, but apart from the crossing from the mainland to the archipelago, the sea was relatively calm.

Conclusion: A boat tour makes the trip to the oldest continuously inhabited city of Croatia perfect!

Split may be a beautiful city. But I personally felt oppressed by the crowds and could not really enjoy the almost two millennia old buildings. When we wanted to relax at the promenade at the edge of the old town, football fans (it was the time of the World Cup, but on that day there was no game) came and went completely crazy: glasses and bottles burst, there was a loud roar and Bengalos were ignited, whose cloud of smoke followed us. This is not my idea of a pleasant break from motorcycling. To make matters worse, on our return we discovered that our jackets had been stolen. That sucks! We went to the only motorcycle shop that was still open according to Google: A Harley Shop! Since the jackets there exceeded our budget a little bit, the extremely friendly owner recommended a second hand shop only five minutes away. There were actually motorcycle jackets and by some miracle exactly one in my size and one in the size of my travel companion. So we started the last stage of the day with two hours delay.

Conclusion: One day I’ll give Split another chance, but on this trip it was a stop I would rather like to forget.

Did you ever have a place on your bucket list for years? A specific place, not a country or a region. And then suddenly you’re standing right where all the beautiful photos on Instagram have been taken. When we arrived in Mostar that evening several hours late, I was almost moved to tears. To see the world-famous bridge from the garden of our Airbnb was simply magnificent. The next morning I even got out very early to take a picture of it during sunrise. So I almost had the bridge to myself!

Conclusion: A dream came true and I am glad that we took this detour!

I was really looking forward to Dubrovnik. Unfortunately we lived a little outside and always had to go by motorbike to the old town 15 minutes away. That is what we did the first evening and the following morning. Here, too, it really was worth getting up early. The picturesque streets of the Croatian capital are usually so crowded that you can hardly get through. At 6 o’clock in the morning there is already an astonishing amount of people around, but it is no comparison to the crowds from 8 AM until late at night.

Conclusion: Photogenic city, but except early in the morning too crowded for my taste.

I had never heard of Trogir before. I was all the more surprised when I saw with my own eyes how beautiful this small town on a little island is. You can walk around the whole island in only 15 minutes. So there is not much to do. There is a small fortress and the alleys of the old town where you can have a relaxing stroll. Trogir is a fantastic place to get lost and take nice photos.

Conclusion: Perfect for a few days of relaxation!

Is there actually a word for the opposite of highlight? Then I would like to use it for Krka National Park. Yes, the waterfalls are nice, but in my opinion this park is a tourist trap. The entrance fee is almost 30 euros and all you can do is walk along the plank (which is not as beautiful as the one in Plitvice) along a river, which leads you to two waterfalls at the end. The other waterfalls can only be seen from a boat, which costs an additional 30 euros. Everything per person, of course. Nice! Then they advertise that you can swim in front of the waterfalls. Yeah, that’s right. Unfortunately, when I was there, it was so crowded that you couldn’t even get to the water. It may be a little more bearable in low season. Also, my friend I was there with thinks I just wasn’t in a good mood. Yes, even travel bloggers sometimes have a bad day.

We just spent the night here. The place looked very cute from our roof terrace of the AirBnB. But that’s all I can say about the place itself. On the way to Senj we stopped in a small village by the sea to fill our hungry stomachs and watch the sunset. Two elderly gentlemen came by and asked us if we were looking for a place to stay. So if you’re in the area and you haven’t booked anything: No problem! You’ll soon find something here.

Ljubljana was my first encounter with Slovenia. This country has also been on my bucket list for a loooong time. And the way from Senj to the Slovenian capital… This is probably the dream of every motorcyclist in Europe. Wonderfully rolling hills and valley landscapes with picturesque villages that lie along quietly rippling streams. The city itself is relatively small, so you could probably explore the old town in one afternoon. But I think it deserves a little more time. So next time I would like to stay a little longer.

Conclusion: A nice city, in which I could perhaps imagine to spend a few weeks.

Bled was together with Mostar my absolute highlight. Because I really wanted to photograph the famous island in Lake Bled. So already in the evening, we started looking for a suitable place from which we could take pictures of the sunrise the next morning. We found a nice spot and came back at 5:45 after a short night. I was worried because it was pretty cloudy but in the end the sunrise was simply magical.

Conclusion: Another highlight. I am very happy that we changed our plans and stayed here for one night.

On our last station I was a little tired. From the long and for me somewhat unusual way of travelling. But we did not want to miss the last sunset. So we drove to the Chiemsee and enjoyed the evening air after having a typical Bavarian meal. It was a worthy end to our three-week journey.

Conclusion: An ideal stop on the way back to Germany.

The time in the Balkans flew by and I am almost sure that next year I will do the tour like this again. Because the Summer Sensual Days will take place again in June and I definitely want to be there. And who knows? Maybe then I can take more time for some of the places and also explore one or the other, which we had to leave out on this journey. The Balkans still has a lot to offer…