Shenzhen – Three Reasons why the Silicon Valley of the East is Cool!

Shenzhen – Three Reasons why the Silicon Valley of the East is Cool!

In December, I was invited to a press trip to China. Destination and topic was the beautiful region of Yunnan. However, on the first it was already clear that my expectiation from the press trip and the expectations of the organizers differed immensely. As I started to voice my concerns after 4 days, I was told to either get in line or get home. Fair enough! I decided to leave on the same day and flew out to Shenzhen.

Shenzen is an exciting metropolis, that constantly gets overlooked as it is overshadowed by its gigantic neighbour Hongkong. Nonetheless, the so-called Silicon Valley of the East is worth a visit! Why? Here is why:

Skyscrapers, lush hills and myriads of colourful lights create a beautiful scenery. The citiy is gigantic and not lacking good photo spots. I did a short trip to one of the city’s several hills and had a fantastic view of the city. Of course, you also get an unbelievable view from one of its many skyscrapers. This time, I sadly did not manage to climb on of them. Therefore, I took the liberty of using this photo from Denyz Nevozhai: 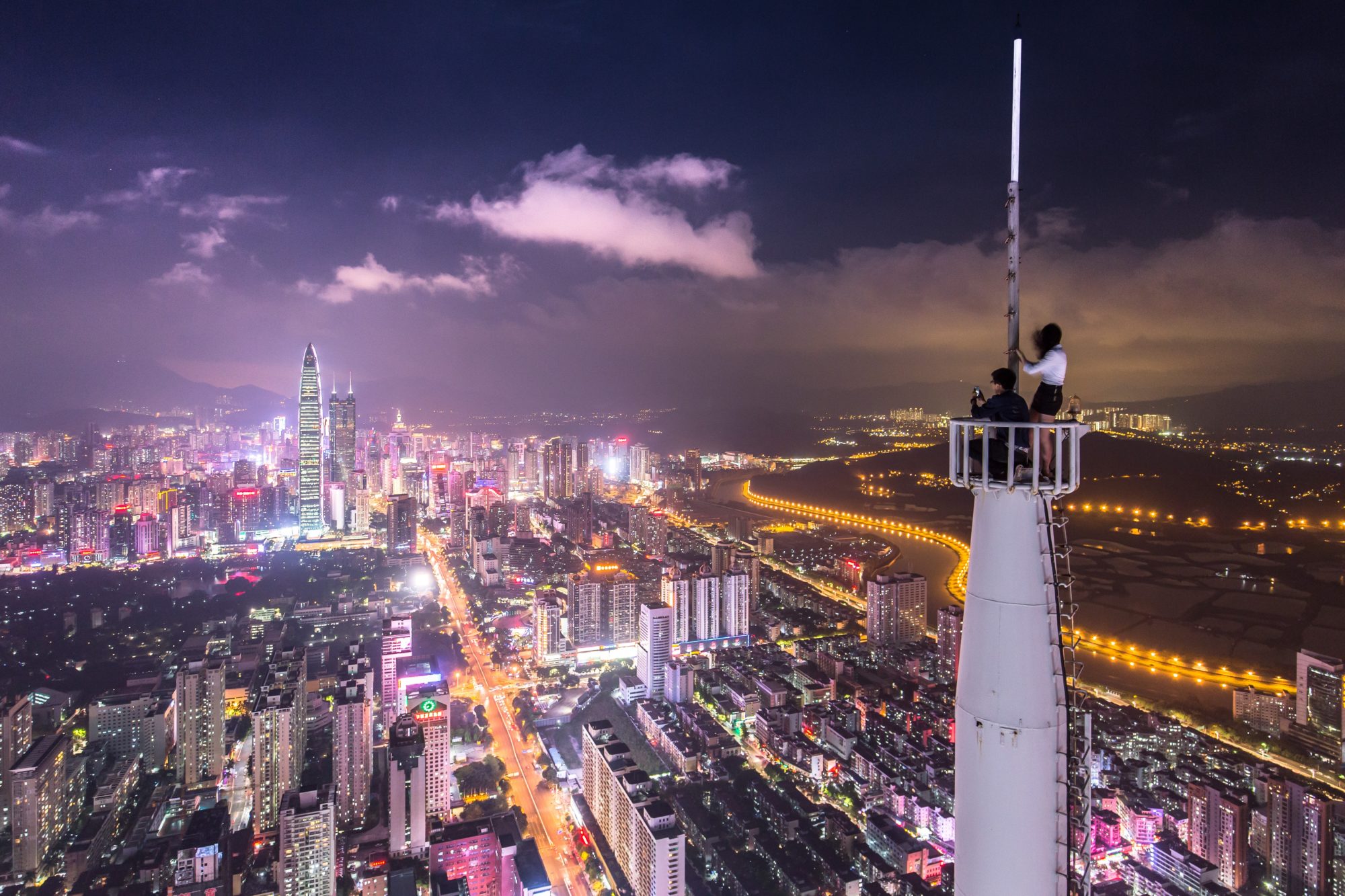 Photo by Denys Nevozhai on Unsplash 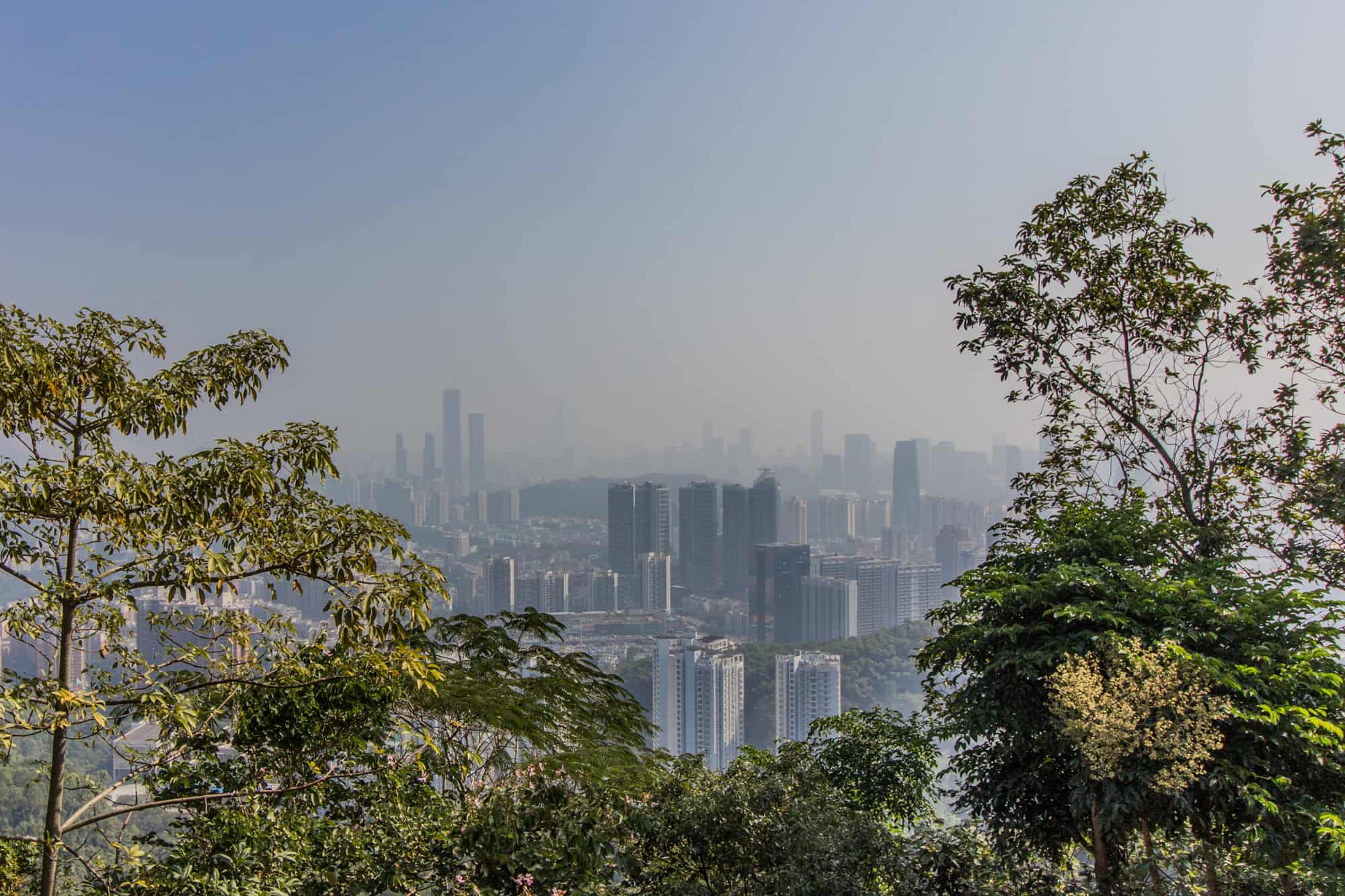 #2 Shenzhen Offers the Perfect Mix of City and Countryside

When you take a trip to one of the hills surrounding Shenzhen you will be out of the city jungle in minutes. You will find yourself in a different world, full of bird’s tweets and everything is green. The Asian touch is ever present, as you come across many temples in varying sizes. 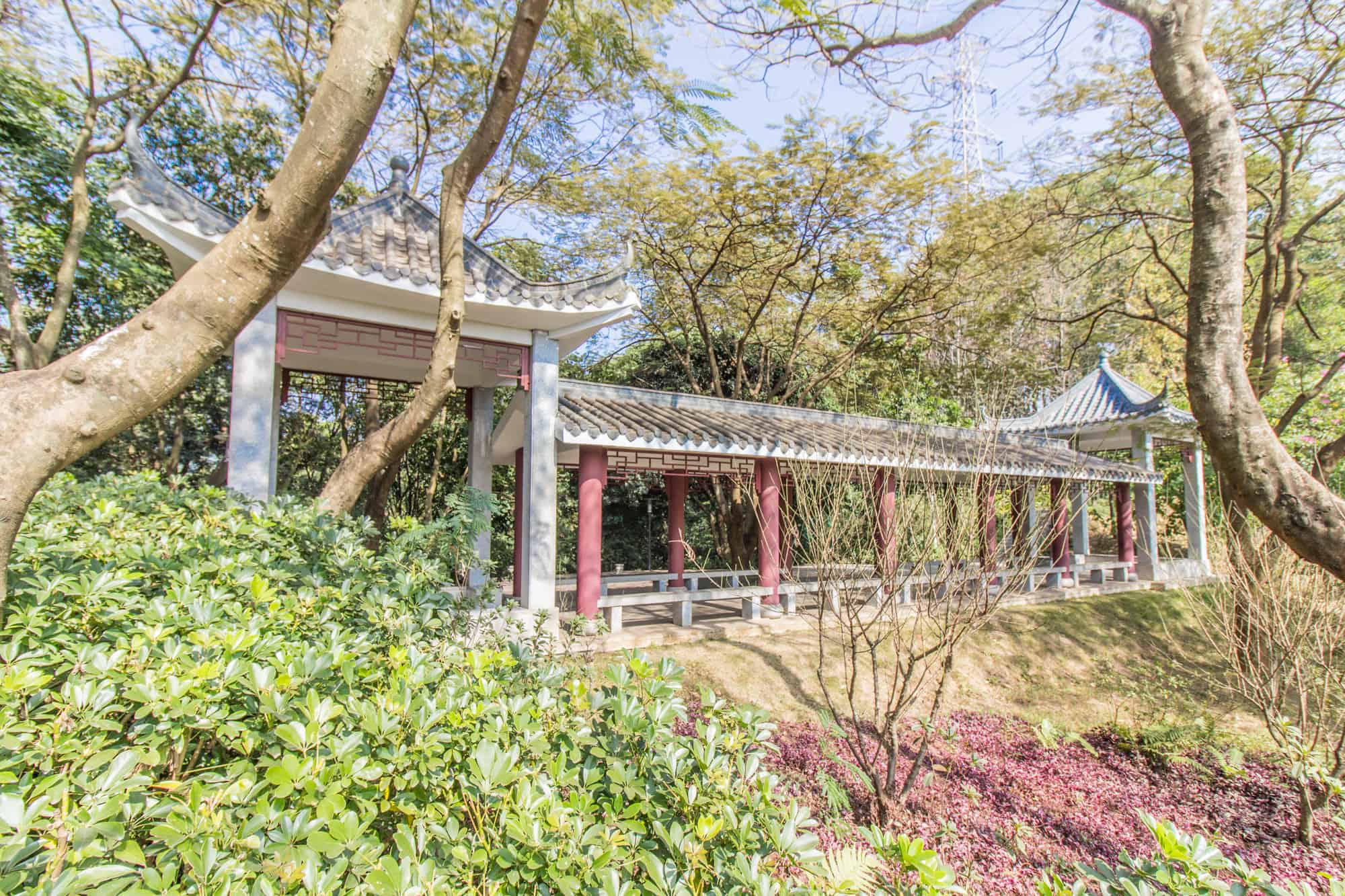 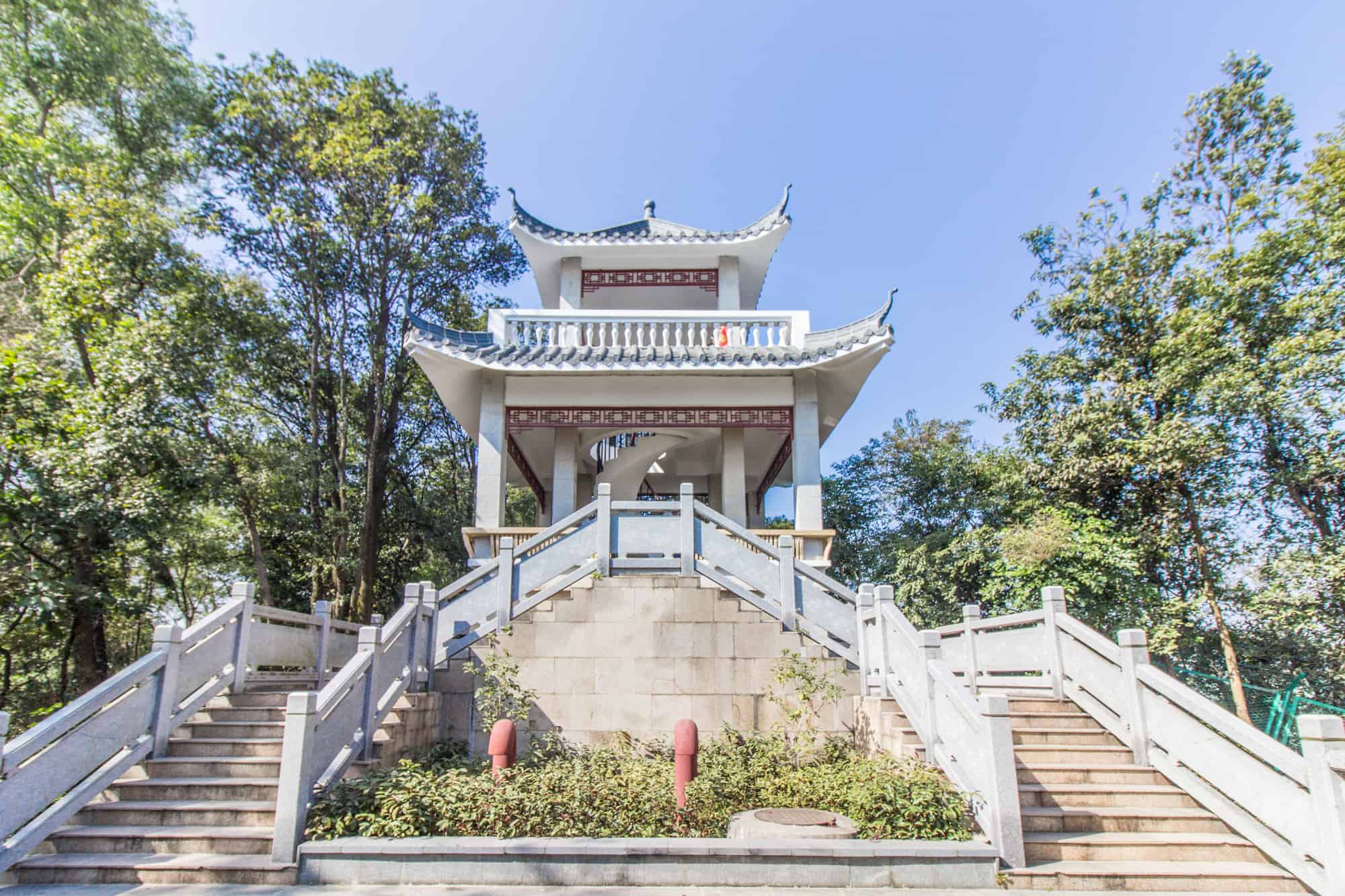 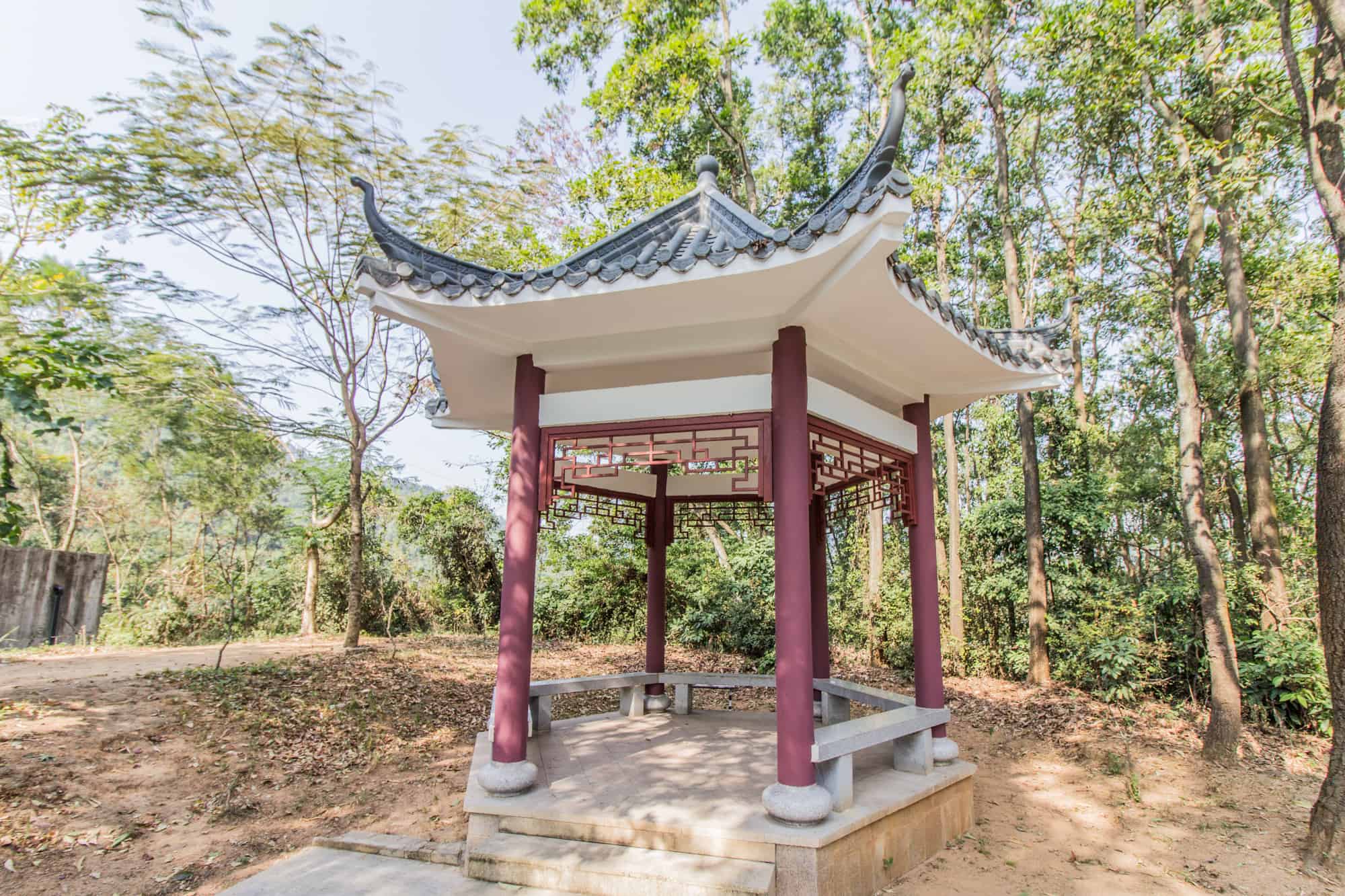 #3 Shenzhen has the Perfect Location

Shenzhen is located perfectly: right next to Hongkong you can strike two birds with one stone! But attention: you will need a Multiple Entry Visa if you want to travel to Hongkong and back to mainland China. Plan ahead to avoid trouble. For Hongkong, however, you do not need a visa for up to three months. 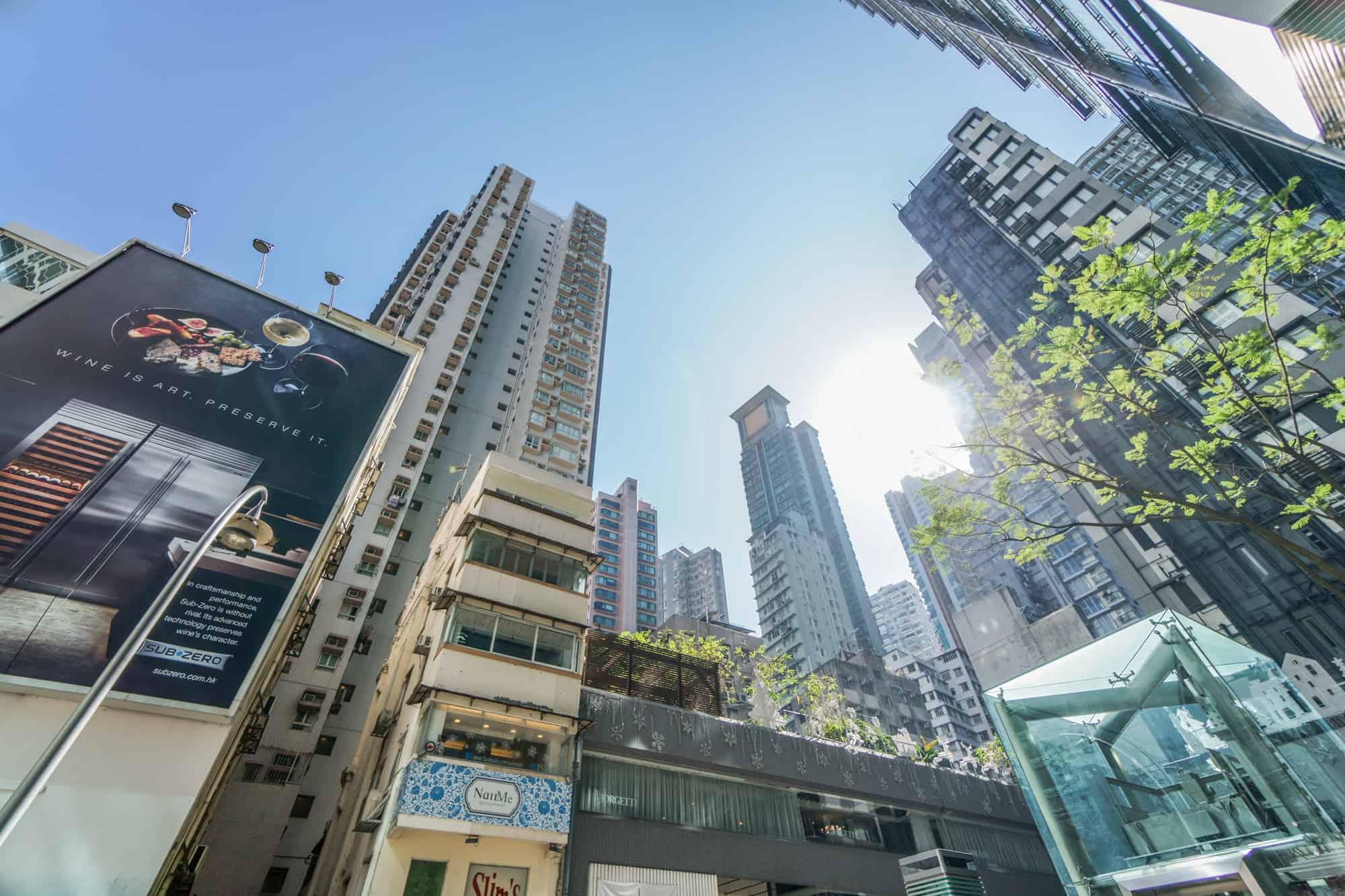 Sadly, I did not do much besides my trip to the hills. There are two reasons:

But it leaves me with the pleasant anticipation to see a lot more on my next visit!

Did you ever have a similar experience?

In December, I have spontaneously been invited to a press trip to China while traveling in Saigon. But after a few days, I broke up and left to Shenzhen, the Silicon Valley of the largest country in the world, which is only a stone’s throw away from Hong Kong. Immediately it was clear: I can not miss a trip to this metropolis!

So it came that I contacted OZO Wesley, a 4-star hotel on Hong Kong Island. And only four days later I entered my amazing room there. The location of the hotel is really great: It is located in the district Wan Chai, which is right next to Central. Thus, you are very close to the actual city center, but live in one part with much less hustle and bustle.

I chose Shenzhen Bay border to cross over from mainland China. There are numerous borders between Hong Kong and Shenzhen. Some even have a connection to the metro. Try to check in advance which is the best option for you. My contact at OZO Wesley advised me to use this border crossing because there is a bus directly from there to Hong Kong Island. However, you still have to buy the ticket in Shenzhen! Unfortunately, I did not do that, so I took a regular bus on the other side and chugged all over Hong Kong before finally reaching Hong Kong Island, which took two hours.

When I arrived at OZO Wesley, I received a warm welcome and was able to go straight to my room. This room has a queen-size bed, a roll-away desk, and a cozy sitting area, which became my favorite spot to work. 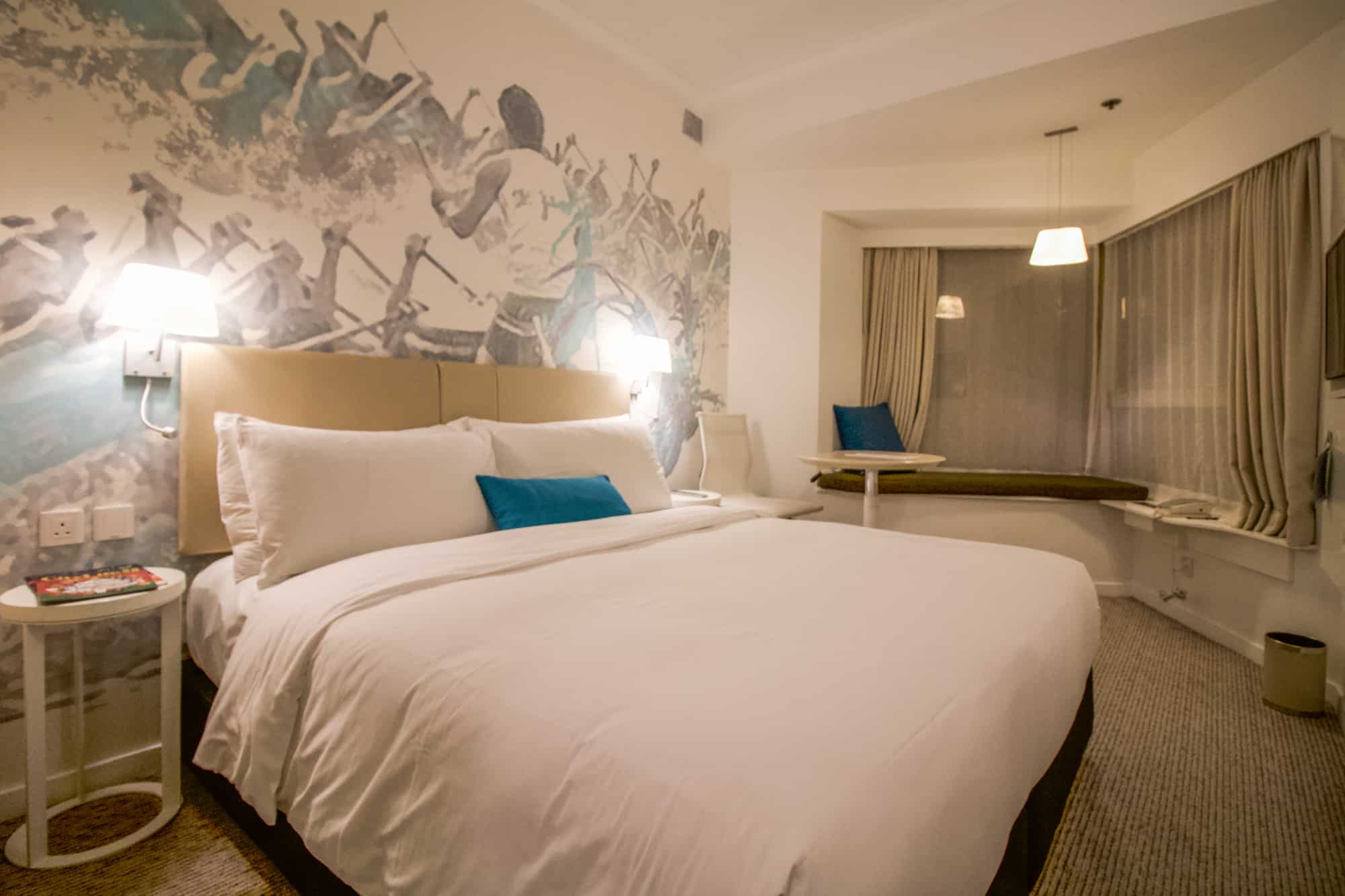 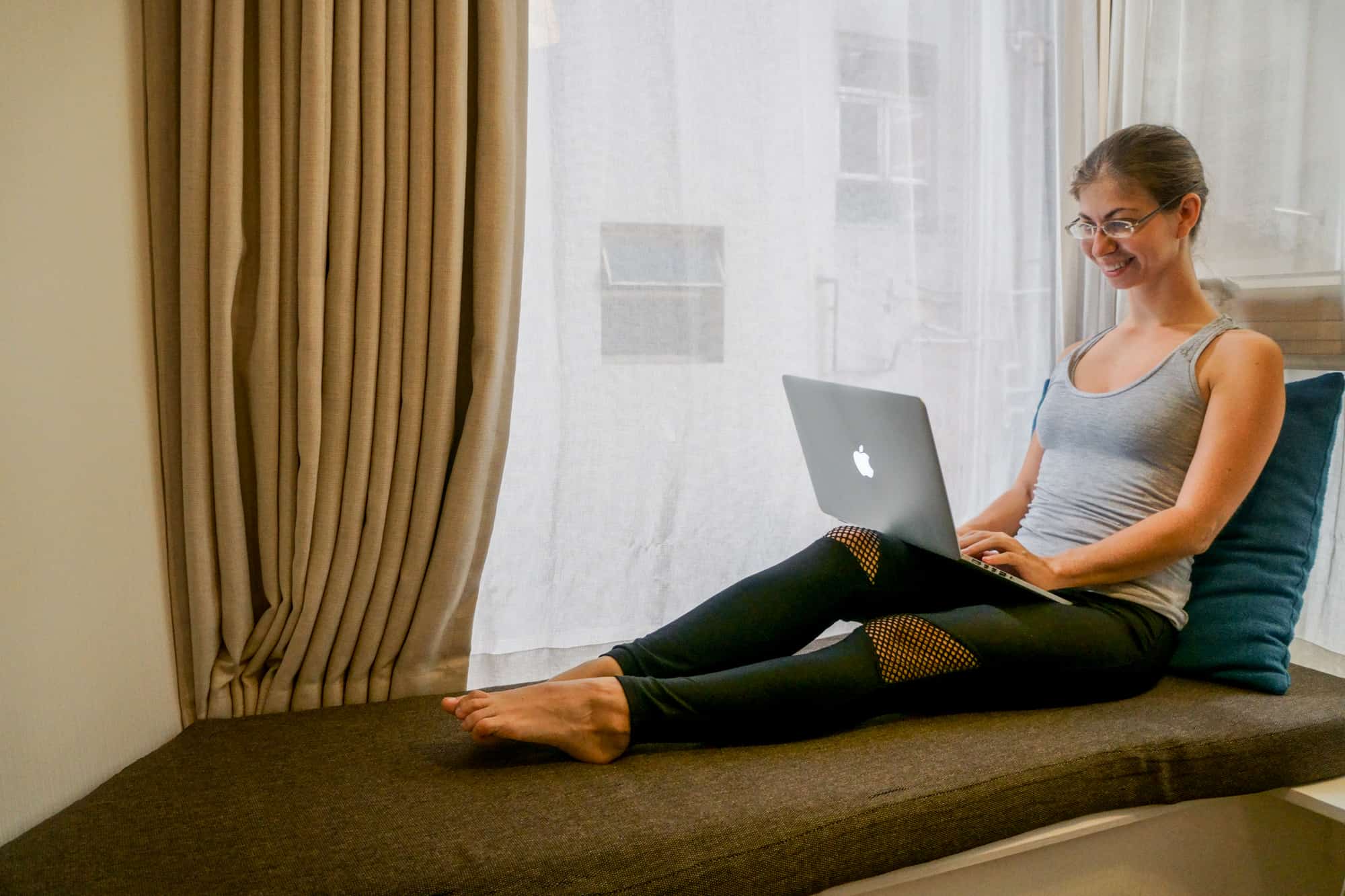 The internet speed was a real treat after two weeks in mainland China and I was glad that I was able to access all websites again without using a VPN service. The bathroom was small but has a spacious shower.

However, I did not stay long In the room: I wanted to go and buy a new camera. Because Hong Kong is a free trade zone, it’s the ideal place if you need new equipment. At the front desk, I asked for the best place for it and how to get there. I was kindly told that there is an underground way via the entrance of Pacific Place to get to Admiralty metro station. From there I could take the red line Tsuen Wan directly to the station Mong Kok: a quarter with different shops. Several streets are for electronics. My goal was clear: second-hand cameras are sold at Sim City!

Thanks to the detailed explanations everything went smoothly. I quickly found Sim City and after some asking around for a while, I also found a store that had the camera I wanted to buy: A Sony Alpha 6300. Then, I went back to the hotel, as it was late in the evening already.

Breakfast is served at OZO Wesley between 6:30 am and 10:30 am. The selection is plentiful and includes both, Asian and international options. I chose international options on both my days – eggs with baked beans, bread, and fruits. Melon, pineapple and passion fruit kick start your day! 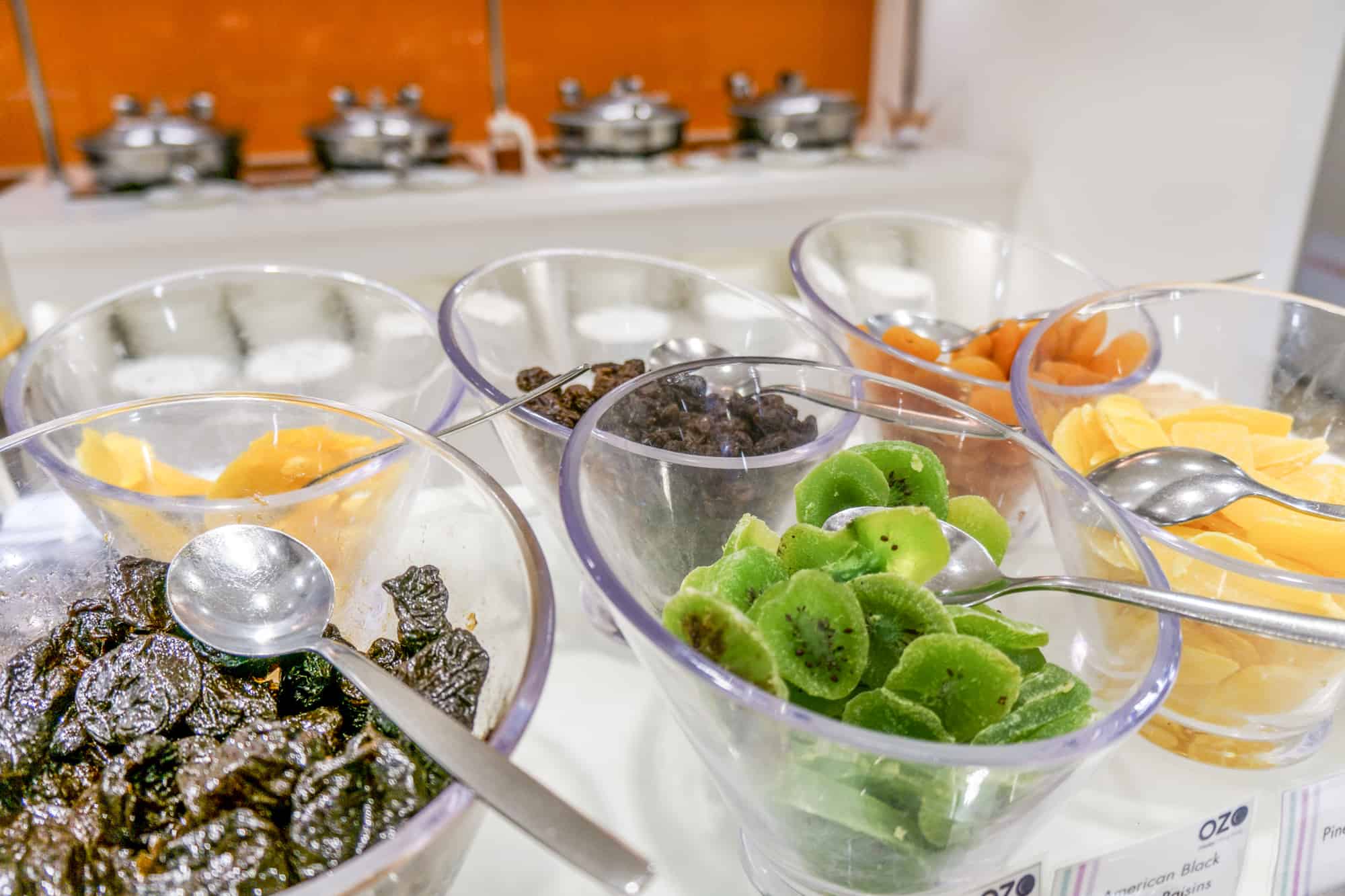 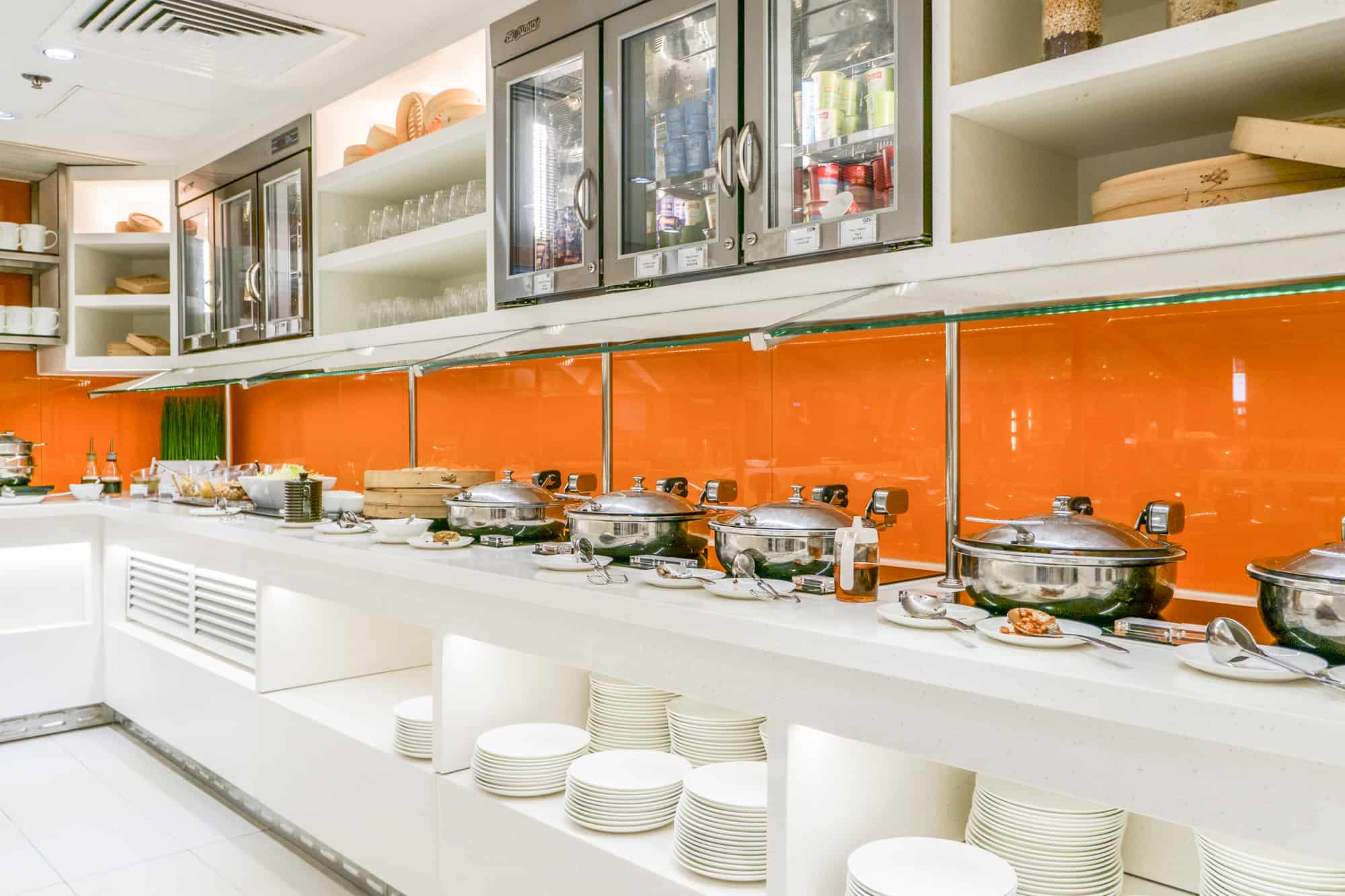 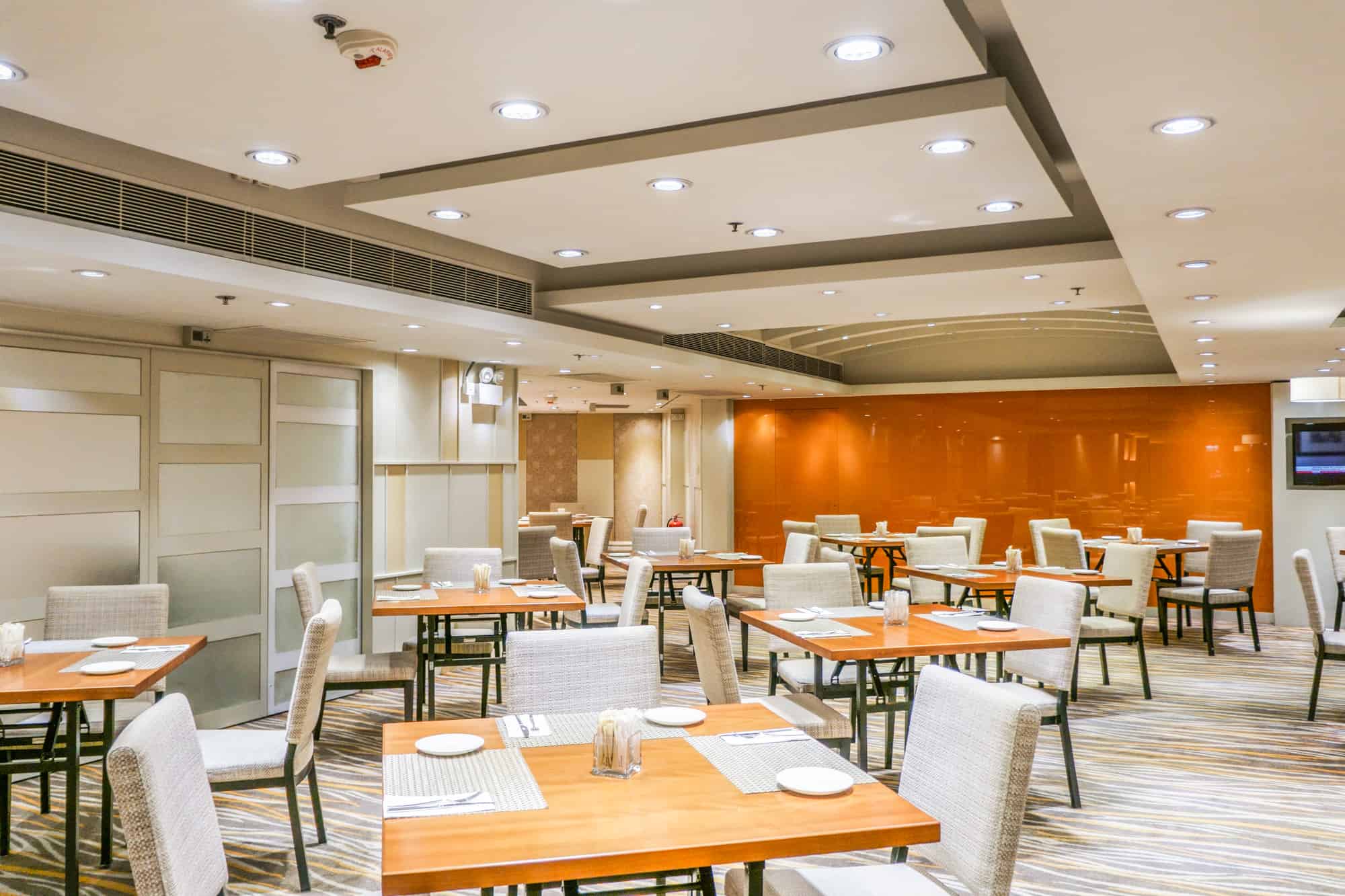 On the second day, I did a trip to the Buddha Tian Tan on Lantau Island. I went with a cable car but you can hike there if you like to have an outdoor adventure.

And this is how my two-day stay at OZO Wesley and Hong Kong came to an end. I would like to thank the team of the hotel for the great stay!

PS: This post was created with the kind support of OZO Wesley who invited me to spend the two nights at the hotel in Hong Kong. I did not receive a financial compensation for this blog post. My opinion is my own and not affected by this collaboration.