On my last trip to Vietnam, I had several tourist highlights on my list. I booked a half-day tour to the Cu Chi tunnels for example. Up to this point, I had never concerned myself with this topic and it was about time to face it. The Vietnam War, or American War as they call it here, is a very prominent topic, especially in the south. On my day trip to the Mekong Delta, I was surprised how often it was mentioned. But I already realized in Ho Chi Minh how important the topic is, as i.e. the most popular museum in town is the War Remnants Museum. So I booked a half-day tour to the Cu Chi Tunnels at my hotel. The price of 314.000 VND (almost 12 EUR) included the drive to the tunnels, as well as the entry and guided tour of about 110.000 VND. On the premises, you also get a snack and tea.

Cu Chi was a place of summer and vacation for the Saigonese. On the weekends and during school holidays, families gathered here and spent their time in the fields, in the woods or at the lakeside. This ended as soon as the Vietnam War broke out. What many don’t know is that not only the guerrilla soldiers hid in the tunnels, whose entrances were concealed in the woods underneath leaves and twigs. But also the thousands of inhabitants of Cu Chi and the surrounding area. They built a system of tunnels and took the people underground to safety. The underground city contained sleeping areas, storage areas, medical stations, and even a kitchen area, to continue their lives underground.

To start the tour, I got picked up at my hotel. With a minibus and 20 other travelers, we went to the northwest. The ride took about 90 minutes. After an hour we made a stop and had a look at a workshop for decorative items, manufactured and painted by handicapped people. Parts of the different patterns are made with mosaic techniques, using broken egg shells. The small pieces are placed in a way that they create patterns and figures. Afterwards, they get painted. lacquered and polished. Fascinating! And everything by hand! After another half an hour of driving, we came to the entrance of the Cu Chi area. Our guide paid for us as a group, so we didn’t have to wait in line. My ticket was included already, but others had to pay for their tickets at this point. In the end, those travelers paid even less in total. Only 260.000 VND. Afterwards, we were led to a forest area. In a clear and open spot, we stopped and before we even had a chance to take in the surroundings, our guide opened an undetectable hole in the ground that was hidden by leaves. A staff member immediately took over and showed its purpose – it has been a hiding spot for guerrilla soldiers. 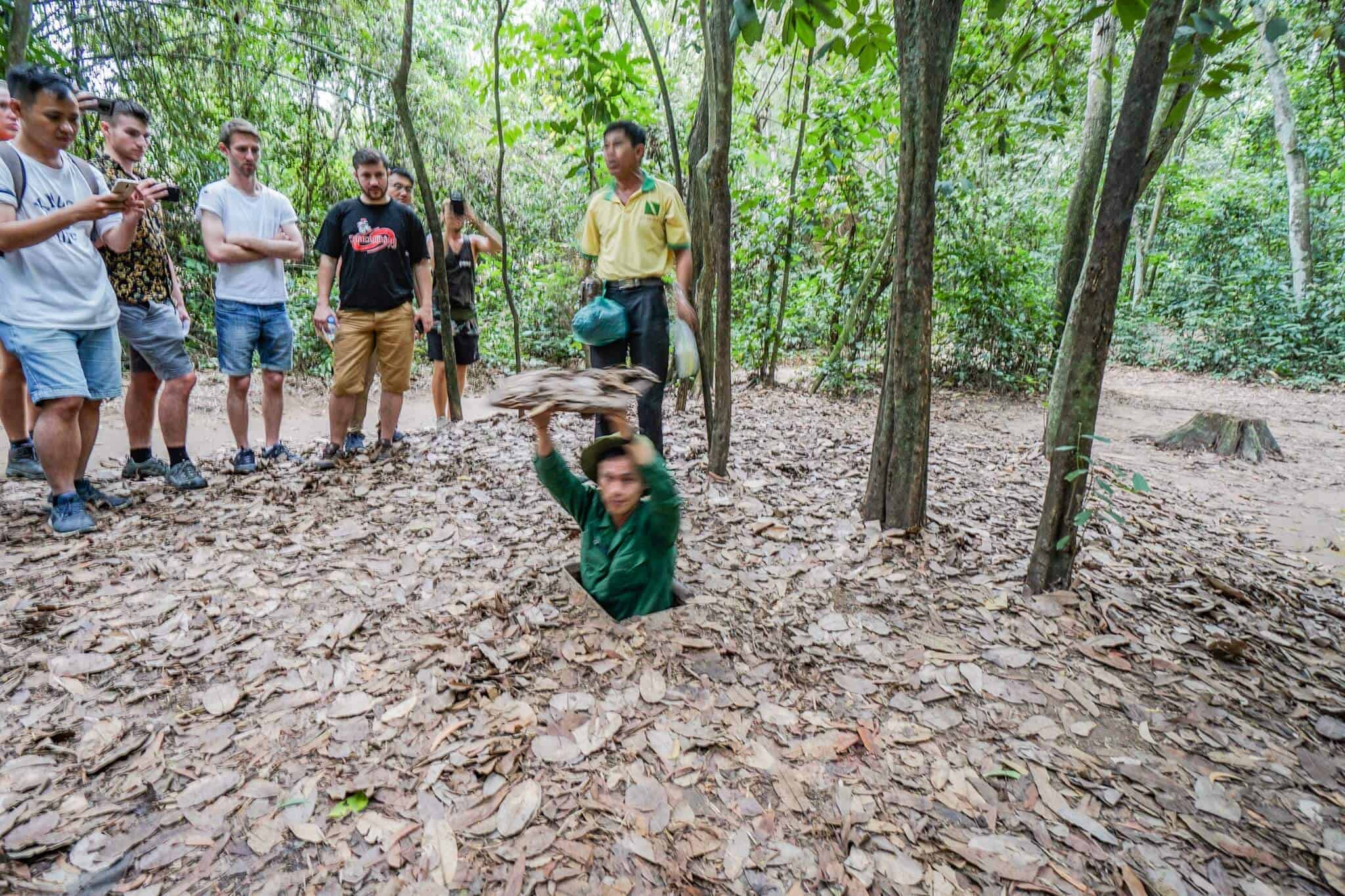 Please excuse the blurred photo. The guide was so quick in going down that hole that I didn’t even have time to adjust my camera correctly! I was surprised by how people back then could remember those hidden entry spots, but they obviously had no other choice. Humans are really capable of extraordinary feats when it comes to life and death. We went on, past inconspicuous hills that were only given away to hide much more beneath them by the small ventilation holes on the outside. 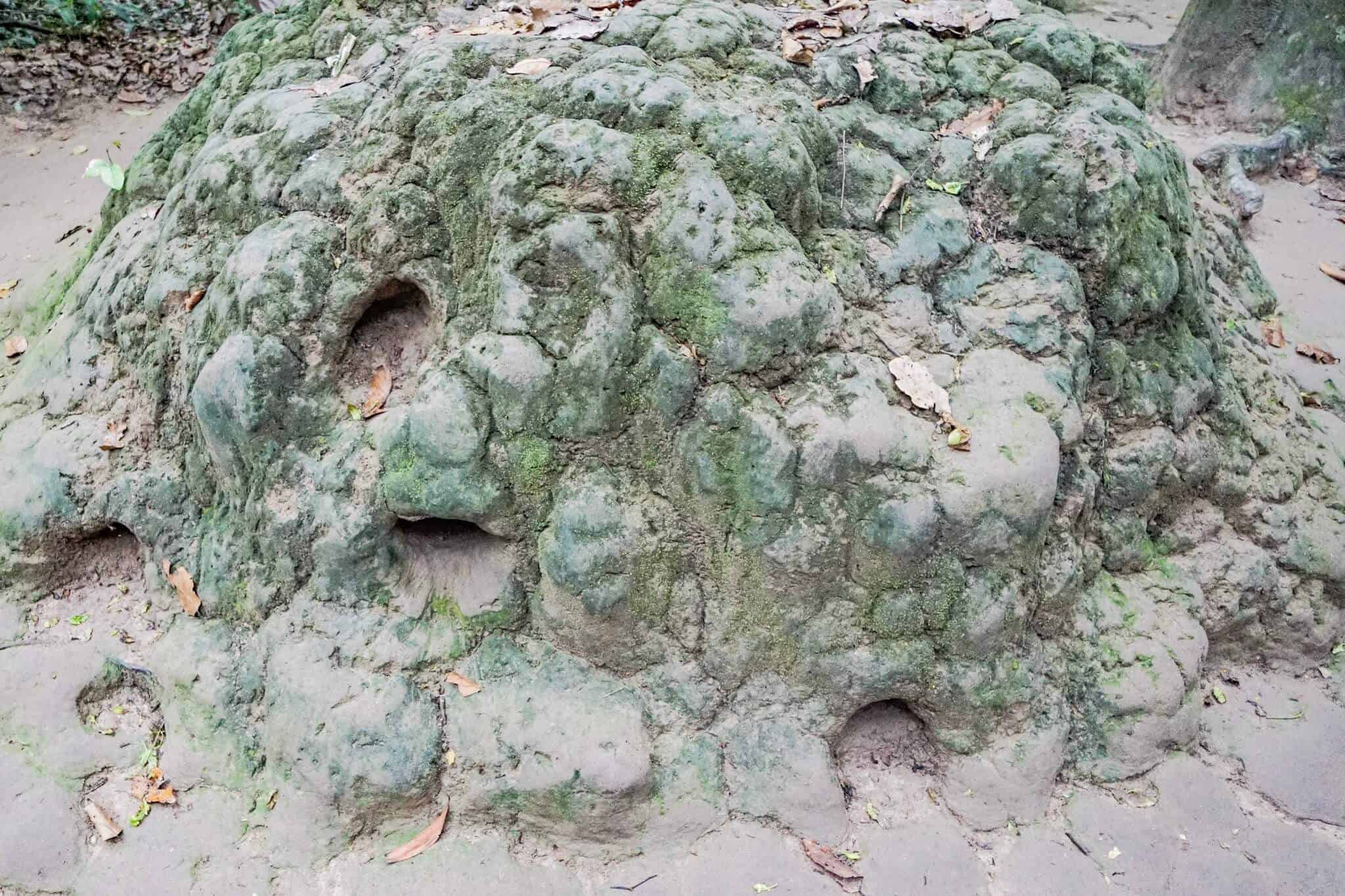 Hidden by leaves, these holes were undetectable. An ingenious system also kept off snakes, rats or rain. By putting spices and chilies in the holes, bloodhounds were deterred from finding them. Next stop was the traps. We were told they were also meant only as deterrents, more than killing the enemy in masses. Several contraptions that reminded me of Indiana Jones were supposed to skewer the US soldiers. 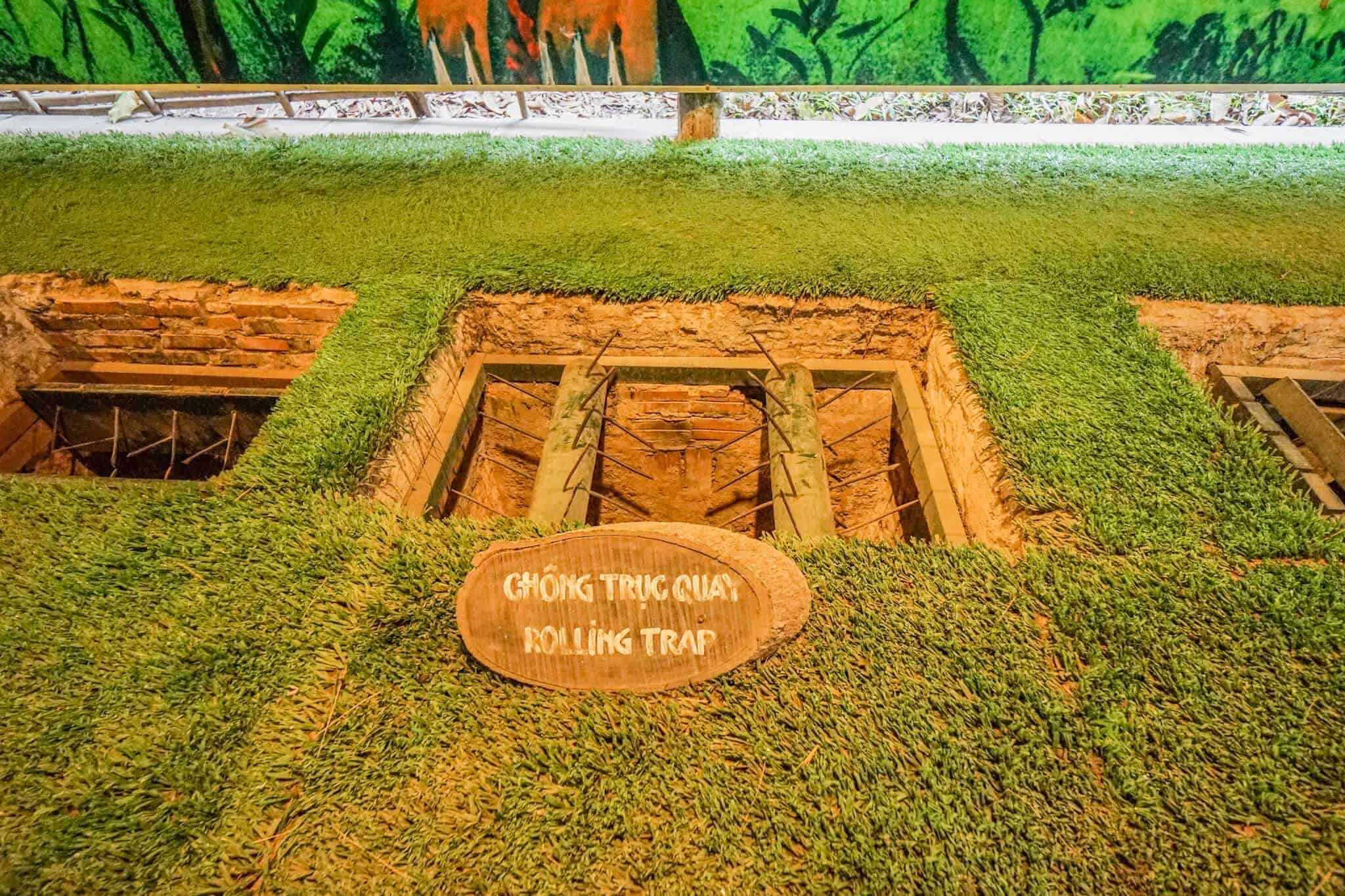 While we listened to the explanations of the different traps, we could hear the sound of gunshots growing closer. I already knew what awaited us. A shooting range. In this safe area you could try out the actual rifles that were used during the Vietnam War for 600.000 VND (around 27 EUR) per magazine and the line was alarmingly long. 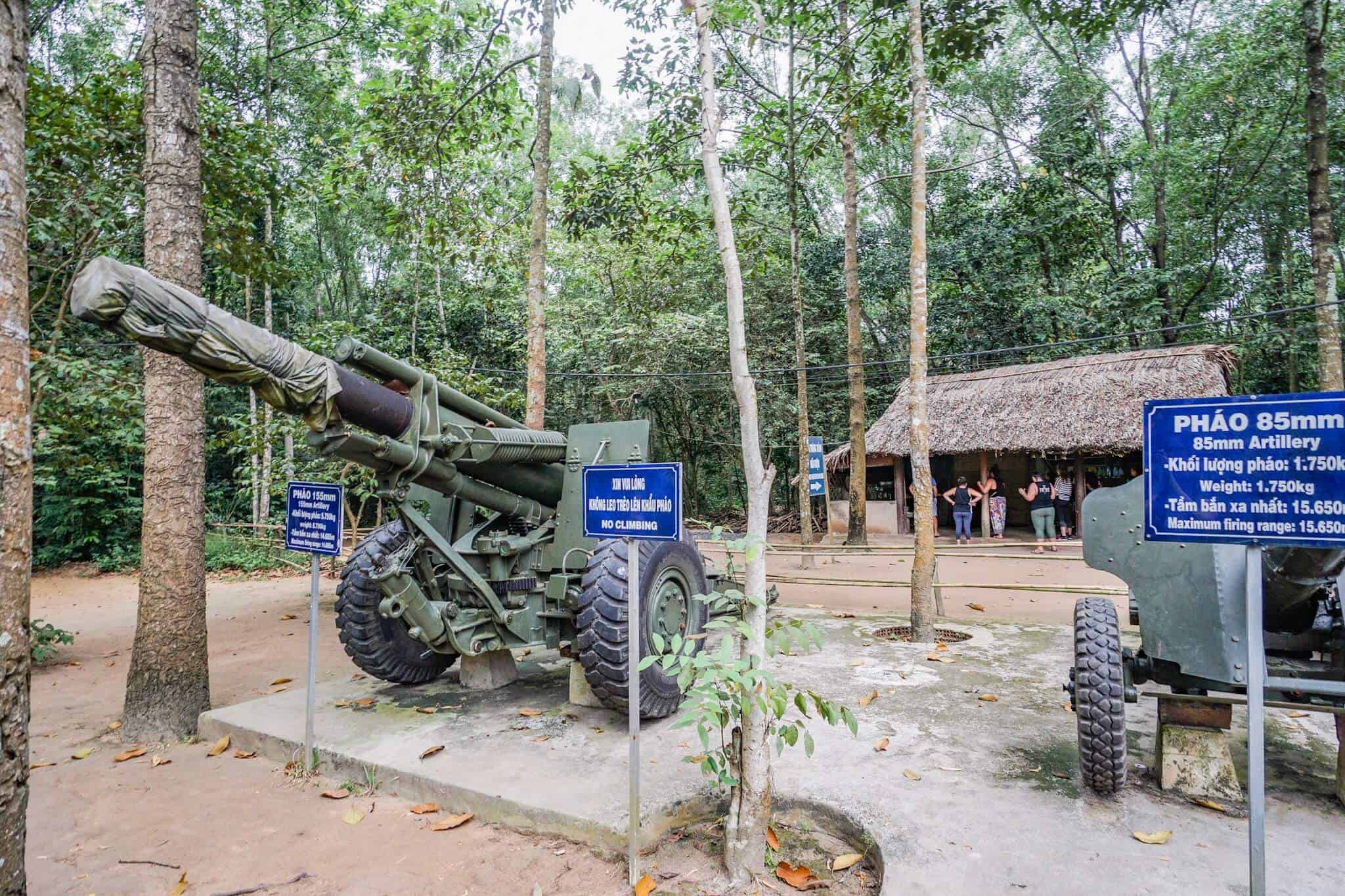 I neither shot one of the rifles nor did I get closer to take a photo. But I guess there are things that don’t need to be photographed. So we waited, accompanied by the relentless gun sound until the tour continued. The next highlight followed: we were allowed to enter one of the tunnels! Originally it was much smaller, but for touristic purposes, they had widened it, so tourists can pass through. During the war, people were crawling on their bellies through the tunnels. For me personally, it was already claustrophobic enough. You could exit the tunnel every 20 meters, but I walked the whole 100 meters. If you can actually call it walking. 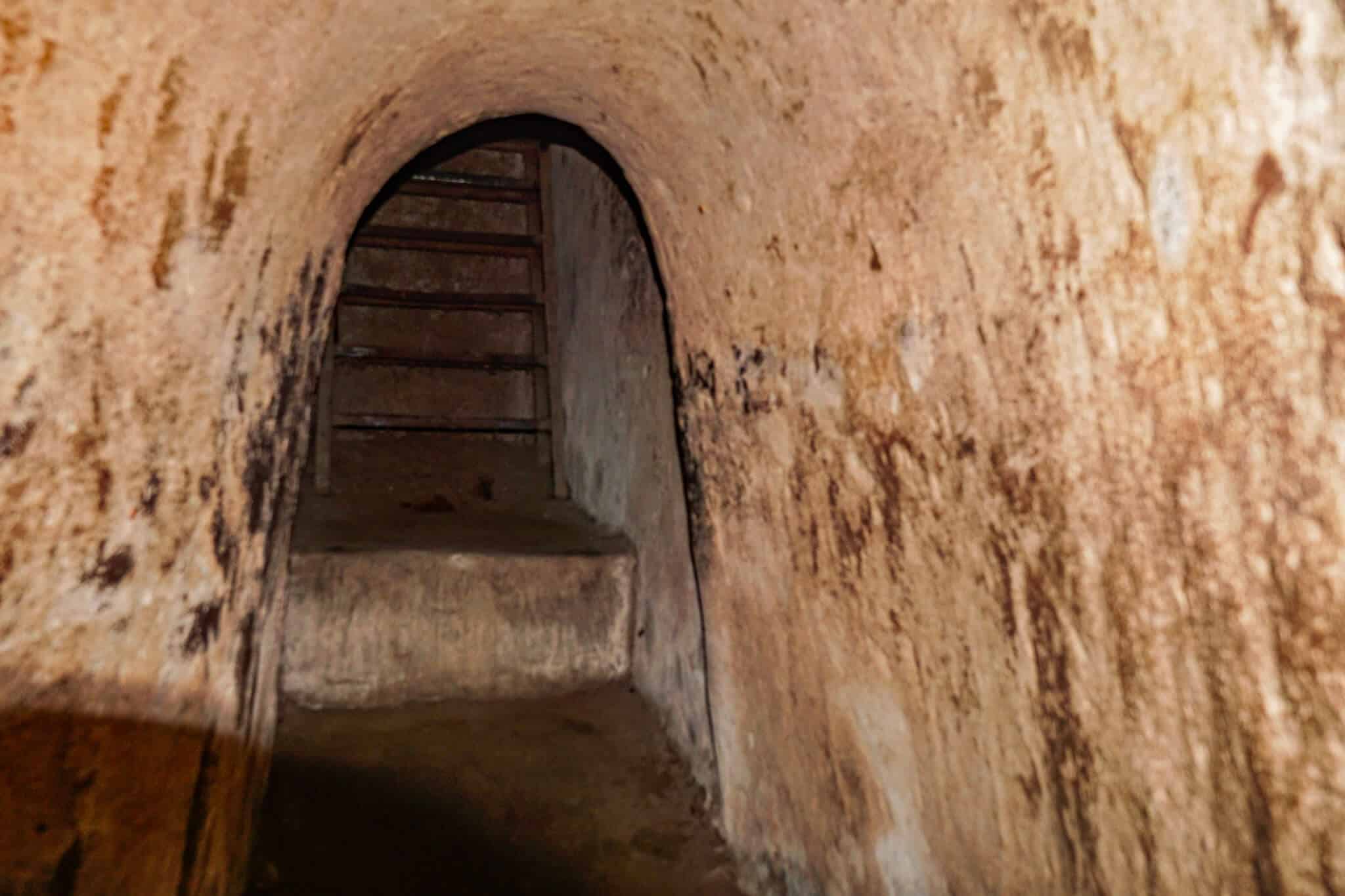 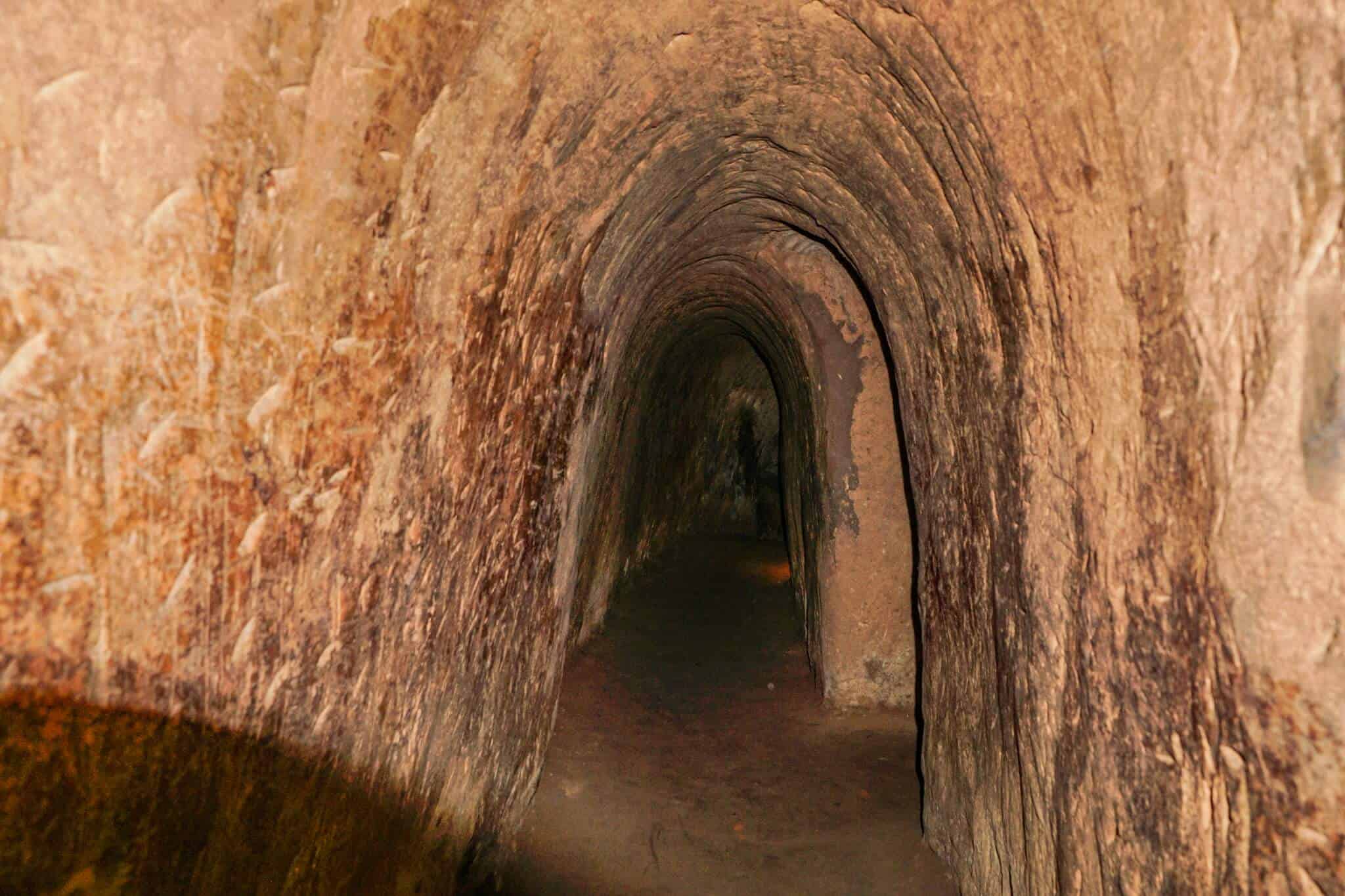 I am not claustrophobic but the thought of being trapped in one of the tunnels was terrifying. I was more than happy to leave the moist and hot tunnels after what felt like an eternity. Next, we got a little “snack”… but not just any snack. Of course, it was tapioca root. The people of Cu Chi survived on these roots for days on end. The roots and tea were even prepared in an underground kitchen, just like the guerrilla soldiers used to do it. The last part of the tour was a documentary about the backgrounds and history of the area. 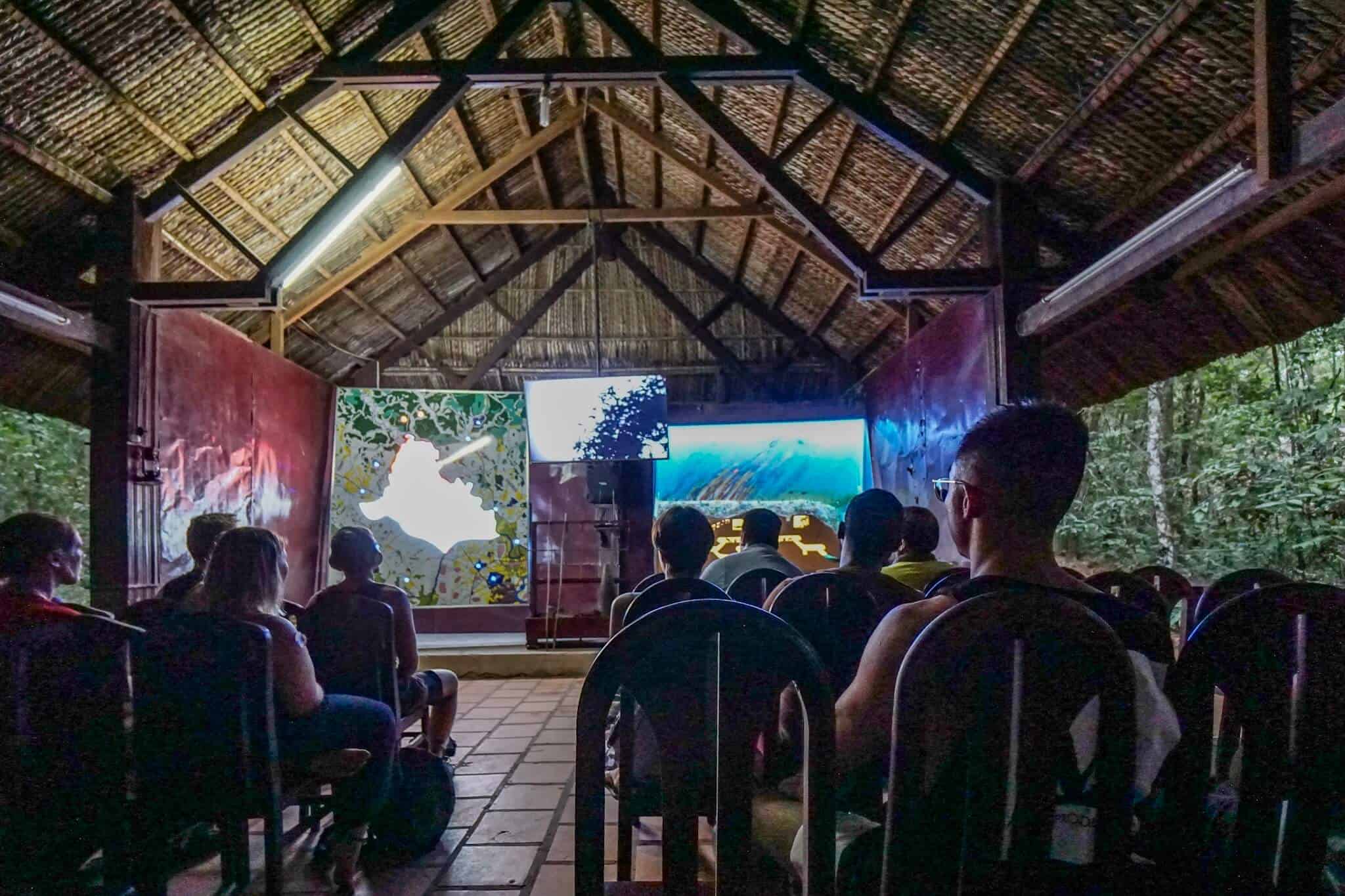 This marked the end of the half-day trip and we went back to Ho Chi Minh City. We arrived around 7 pm and got dropped off at the Benh Thanh Food Street.

For me, this is a really uncomfortable topic. Personally, I don’t like to concern myself with war history – I admit that. However, as it is an important part of Vietnam’s history and culture, I think it is critical to at least get a basic understanding of it. Even if it’s only out of respect for the Vietnamese people. Hence, I’m glad I made this step and experienced it with my own eyes.

The Saigon Guide for Digital Nomads

Are you searching for a cool spot for digital nomads in South East Asia? You should check out Saigon! 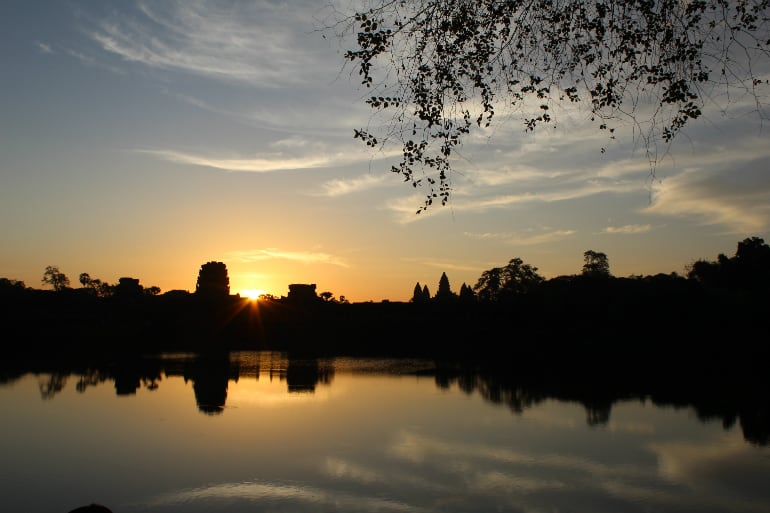